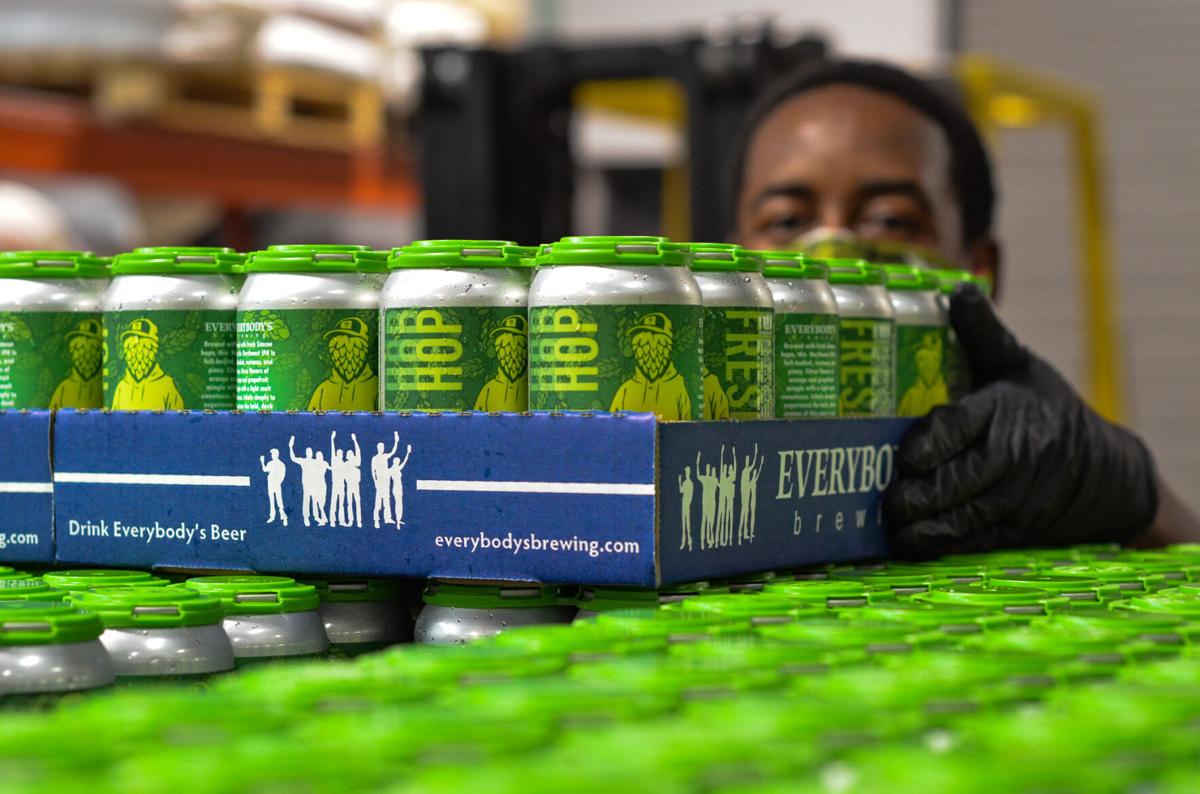 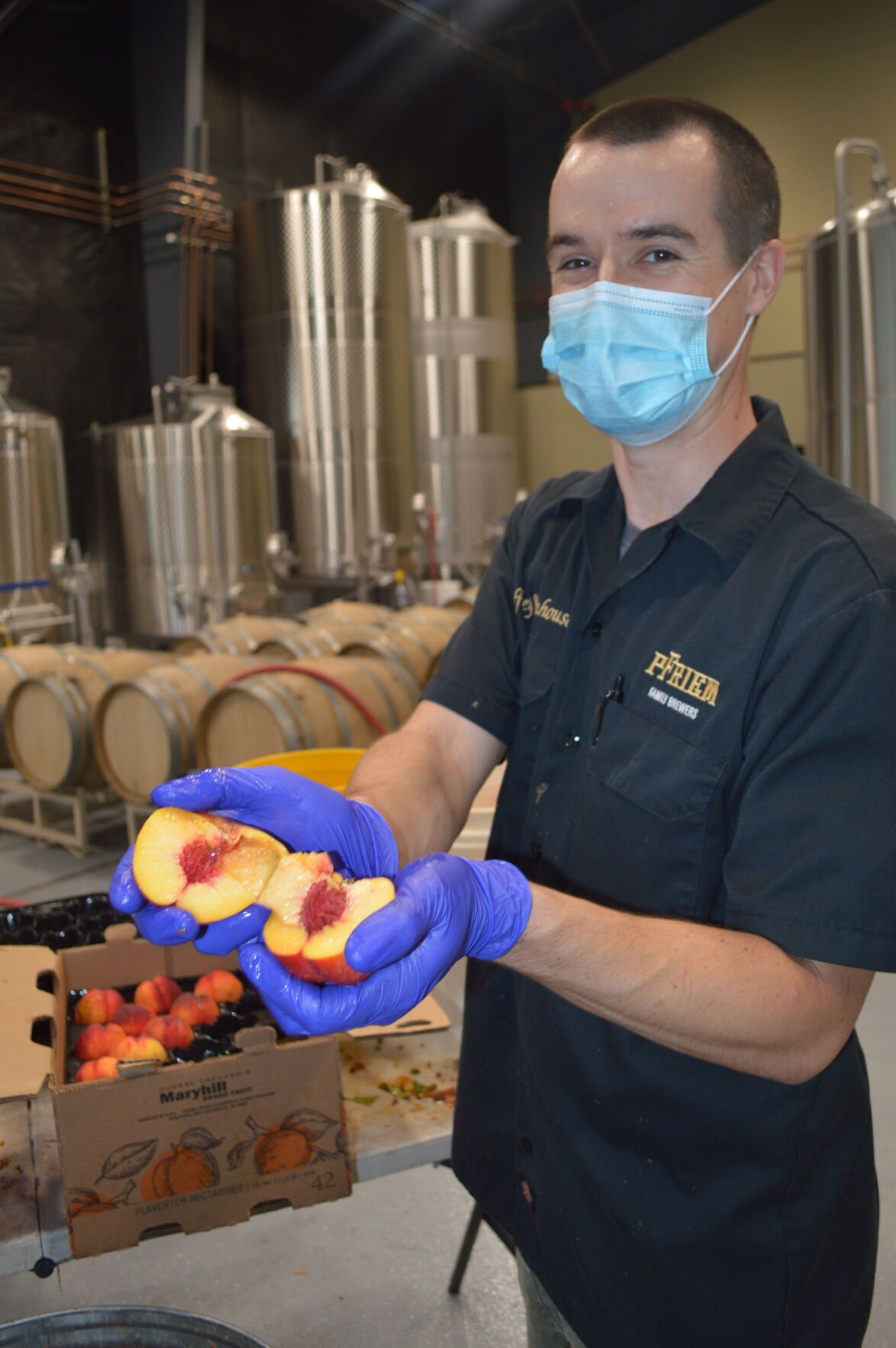 At pFriem’s new barrelhouse facility in Cascade Locks, completed earlier this year, Jeffrey Rittenhouse cuts up part of thousands of pounds of nectarines for the next batch of the brewery’s distinctive fruit ales. Kirby Neumann-Rea photos 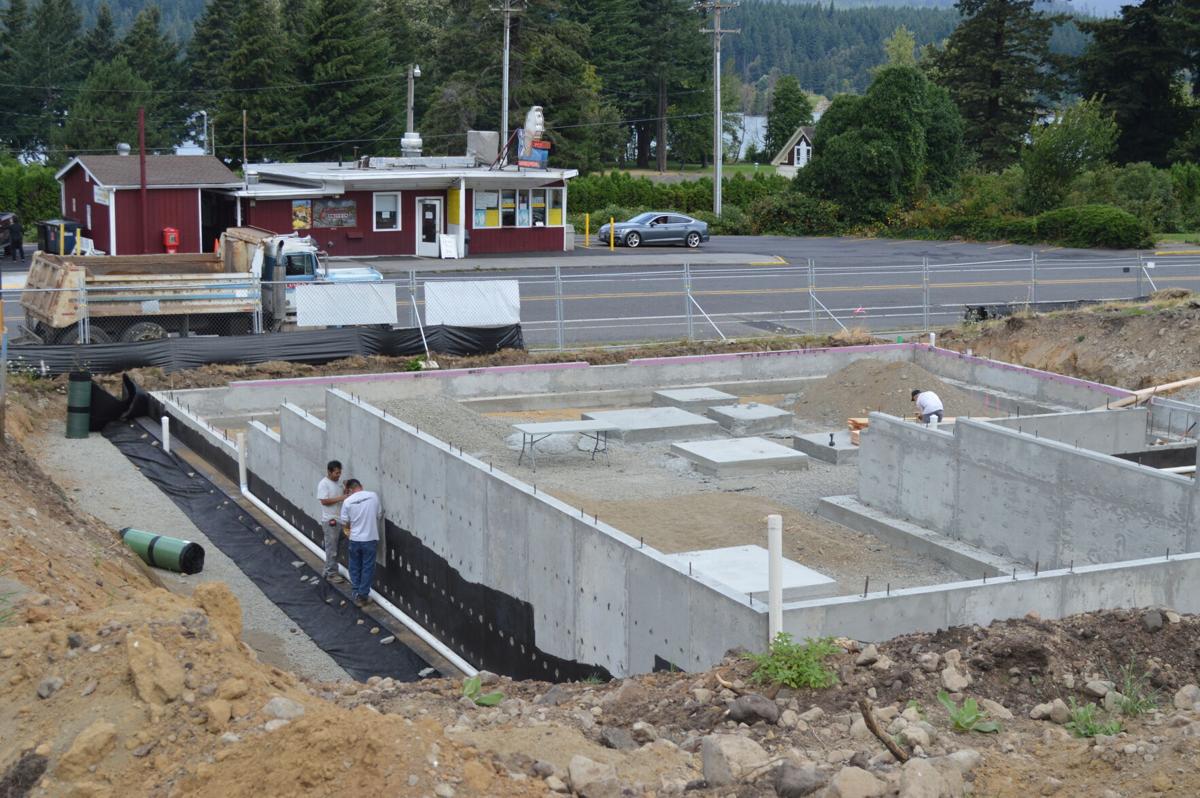 At pFriem’s new barrelhouse facility in Cascade Locks, completed earlier this year, Jeffrey Rittenhouse cuts up part of thousands of pounds of nectarines for the next batch of the brewery’s distinctive fruit ales. Kirby Neumann-Rea photos

Welcome back to The Ale List, the Gorge’s basic beer compendium, in print again after a few months’ hiatus for no particularly good reason. The art of beer-making never dies and Gorge brewers and beer businesses have stayed active and creative during coronavirus. No pandemic panic by these men and women.

However, the Gorge’s premier beer fest, Hood River Hops Fest, had to be canceled, along with all other seasonal lupulus-loving events around region. They will be missed but here’s to the return of the festival in 2021, and to other local events in 2021, including Holiday Hangover Fest, Gorge Gulp and Zwickelmania.

No way of knowing, given pandemic pressures, but keep your calendars open.

There is bubbly, aromatic fun to be had, and ale tales to be told, so let’s get started ...

Hood River’s second-oldest brewery, Big Horse, has closed permanently and owners Randy and Susan Orzeck plan to put the building up for sale, 32 years after its founding (and 23 years after the brewery started.) Heavily damaged by fire on May 5, 2019, the brewery and Horsefeathers Restaurant have been closed since, and the Orzecks said they reached agreement last week after a protracted insurance negotiation. That, combined with rebuilding costs and city requirements, along with the realities of COVID-19, were factors that merged to convince them to retire.

The loss of the landmark restaurant and brewery is a sad day for Hood River.

Yet, brewery starts and expansions are examples of the forward motion of the local brewing scene in 2020. A new brewery, Working Hands, will open this fall in Hood River, and in Cascade Locks we see the long-awaited new building for Thunder Island Brewing (featured in our Sept. 23 edition) and await the arrival of Gorges Beer Co. in 2021.

With Hops Fest off the calendar, The Ale List boils up plans for  a virtual festival! We asked brewers from Breweries in the Gorge to tell us favorites and “real or imagined” festival ales.

(We’ll have that, and details on Gorges Beer in an upcoming column.)

Breweries have scaled back operations to varying extents following the advent of pandemic closures and restrictions, but all those operating six months ago have pressed on with pub service and/or new beers. Breweries have kept putting out new beers and expanding canned offerings, including Ferment Brewing and Everybody’s Brewing, Full Sail’s repackaging look (launched in May) has not gone unnoticed, nor have the brewery’s new beers; West Coast Hazy IPA, Hood River Hazy IPA, and Bohemian Pilsner.

A new brewery will start up this fall: It’s called Working Hands and is based in the newly-expanded Slopeswell Cider space on the Heights in Hood River. (Slopeswell is expanding its kitchen and pub to the former HR Barre space just north of the existing cidery.)

Working Hands brewer Kasey McCullough has teamed up with Slopeswell partners John Metta, Chip Dickenson and John Terhaar. The guys installed the new equipment last week, along with a new brewing system for Slopeswell. Also moved in was Working Hands’ gleaming Slovakia-made 4.2 barrel system, with decoction built in. (If you’re like me, that’s one of those words you mostly understand but have to look up: Decoction is the extracting and boiling of part of the mash and then returning it to the mash, as a way of developing malt character and depth.)

McCullough plans to start brewing in about another week or so, with debut tapping in about 6-8 weeks. Look for an emphasis on lagers from McCullough, who trained in Germany.

We have other catching-up to do on local beers, and it can be as much fun as encountering a fresh taster tray.

Full Sail was lone among the operating breweries in Hood River County not to offer pub service or takeout since March, but from Solera in Parkdale to Everybody’s in White Salmon, the pubs moved from simple takeout to some form of seating, indoor or out, once Phase 2 came to be. pFriem Family Brewing had to forgo its summer party series but from March onward it opened up a window on Portway for to-go sales that drew a continual string of beer drinkers from near and far. In July, they added a parklet for outdoor seating, on the east end of the building. On the west end of pFriem, brewery, installation is underway on the new brewhouse and cellar.

pFriem co-owner Rudy Kellner said, “The new brewhouse will allow us to produce more beer, more consistency, and at even a higher level of quality. There is also significant support equipment, such as a grain handling system, and wastewater management system that are being installed to support this brewhouse. We expect all of these systems to be up and running in November.”

The lure of the patio

Meanwhile, with COVID-19 restrictions ruling the day the busiest outdoor venue around has been Ferment, which adapted its food and beer service to its expansive patio with its views of the river and downtown Hood River. On any given day, every seat on the patio was filled.

Among non-brewery beer businesses, Volcanic Bottle Shoppe in Hood River celebrated its 10th anniversary in July — “10 years of crushing it!” — with Abe and Amanda Goeke holding court in the back patio while accepting toasts with “Vol-CAN-ic” IPA, their collaboration with Everybody’s Brewing in White Salmon. The beer is gone but commemorative 10th anniversary t-shirts and insulated tall-can koozies are available. Abe said they’ll be covering the patio soon to provide outdoor seating year-round.

Route 30 in The Dalles regularly stages live music, with a Halloween show by AC/DC cover band School Boy; the pub’s mug club is offering a half-off deal through Oct. 31, for membership in 2021.

Finally, a concept that covers a lot of ground was on a bumper sticker seen recently in Hood River:

“Oregon: The people are pure and the water is beer.”