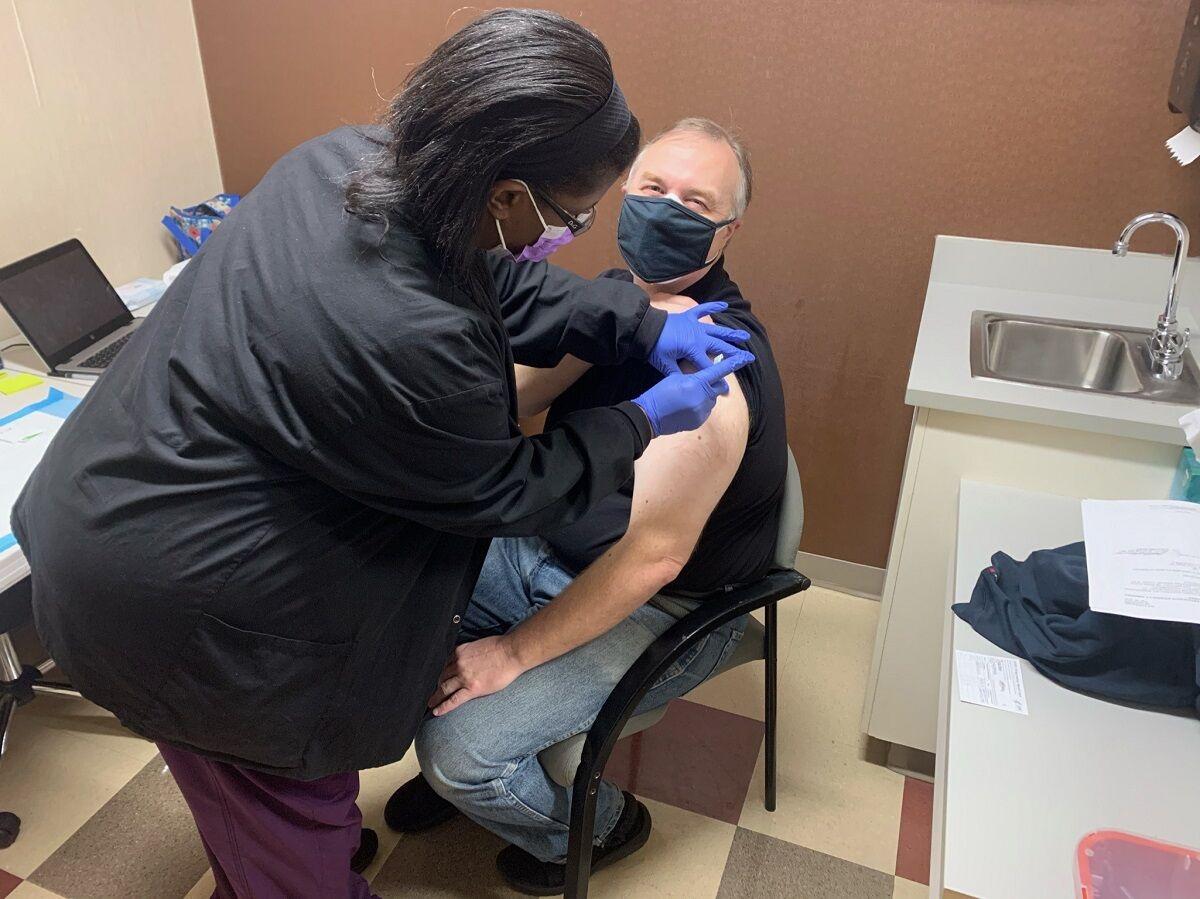 Jeff Stewart, a native of The Dalles, gets the real Pfizer vaccine in early March after participating in the Pfizer Phase 3 trial, in which he got the placebo dose. 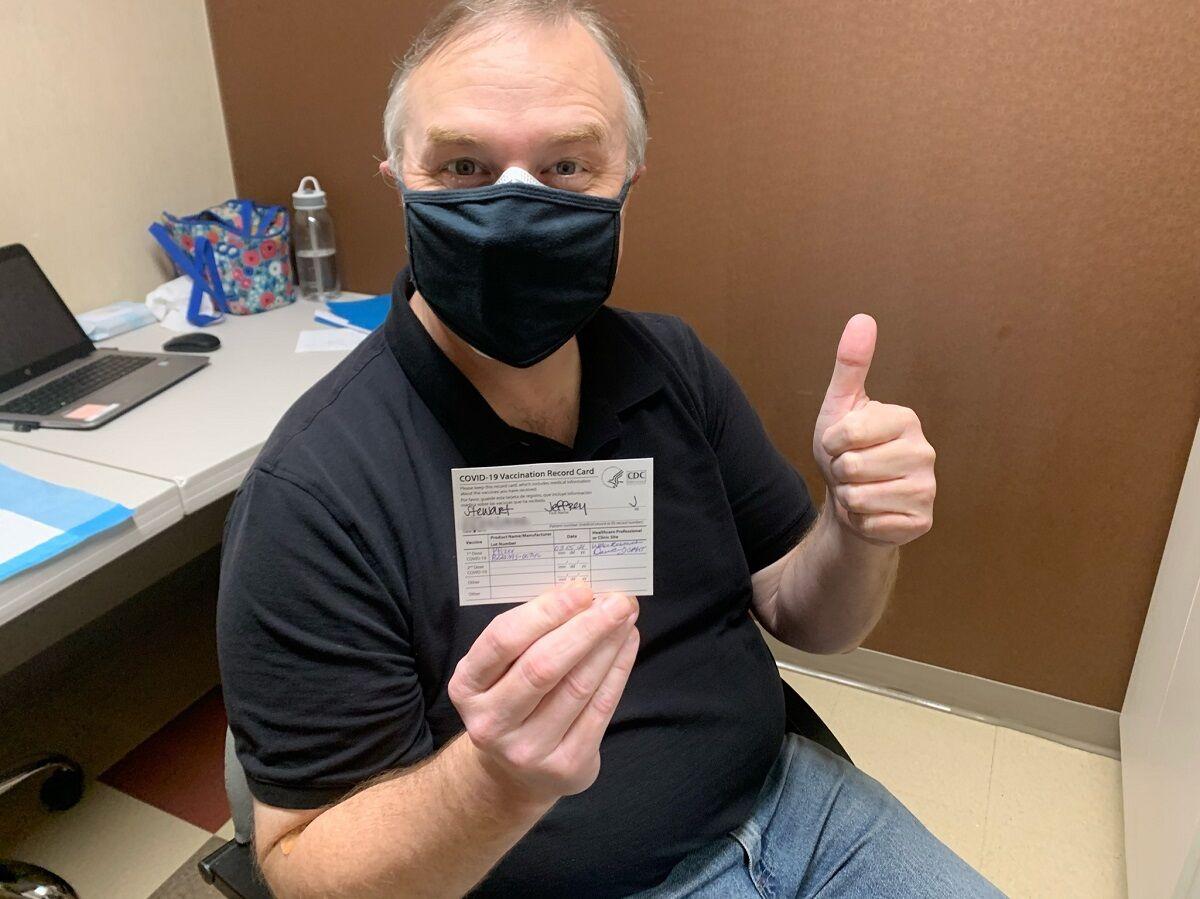 The Dalles native Jeff Stewart was surprised when people who learned he’d volunteered to be Patient No. 1271 in the Phase 3 Pfizer COVID-19 vaccine trial thanked him for his service.

Stewart wasn’t taking a personal risk for the greater good. A longtime management consultant in the pharmaceutical industry, he’d read the data from the first trial phase and knew the vaccine was safe.

He just enrolled in the trial in hopes of getting vaccinated early. Being thanked, he said, “felt odd to me. ‘I cut the line? You’re welcome?’”

As it turned out, he didn’t cut the line. He was in the placebo group of the study, meaning he got a saline injection, and not the actual mRNA vaccine.

In early March, when his placebo status was revealed, he got the real thing. After his first dose, his arm was sore like somebody punched it.

After his second dose, he had a sore shoulder again and felt nappish.

He knew to check clinicaltrials.gov for trial locations, and was happy to find one near his home in North Carolina. He was paid more than $1,000 to be in the trial — a condition of which was that he didn’t currently or previously have COVID.

He got tested for COVID several times throughout the trial, and had to track any symptoms in an online diary. He was paid another $300 for a follow-on study, where he tested himself at home three times for COVID.

Vaccines in general are very safe, Stewart said, and trials for vaccines tend to be large. But the trials for Pfizer and Moderna, the first vaccines given emergency authorization for use in the U.S., were unusually large, Stewart said.

It took scientists “five days to design the vaccine. It took 11 years to figure out how to do it." — Jeff Stewart, Pfizer trial Patient No. 1271

Such trials need “a huge, huge amount” of participants to get useful information, Stewart said. In order to show that the people who got the vaccine were actually protected, a large number of people were needed in the placebo group who would be exposed to the risk of contracting COVID.

“And they found out there was a lot less — 95 percent less,” people who got COVID amongst those who were vaccinated compared to those who got the placebo.

In fact, he said, “I do not think there has been a more successful invention in human history.”

It took scientists “five days to design the vaccine,” he said. “It took 11 years to figure out how to do it. They were ready instantaneously. Five days they had the vaccine designed. Five months later they had it in arms.

“These vaccines have almost nothing in them,” Stewart said. “The Pfizer vaccine, it's mRNA (messenger RNA) which our body is full of. Plus water, salt, and fat, and that’s it. It’s not even a piece of the virus. It’s not even a vaccine in the traditional sense. It’s an instruction to your body to make a vaccine. And it goes away. People sometimes compare it to Snapchat. It’s like a picture of the bad guy and your body learns how to fight it, and the picture itself destructs, and it’s gone.”

A 1990 graduate of The Dalles High School who won the College Championship on the TV quiz show Jeopardy, Stewart had Pfizer as a client years ago in his pharmaceutical management consulting work.

He’s also had Johnson & Johnson, which also has an emergency-authorized vaccine, as a client.

Stewart paid attention early on to the pandemic. Seeing looming ventilator shortages more than a year ago, he worked with medical colleagues to get the word out about using a BiPAP machine instead. They’re a step below a ventilator and are typically plentiful in hospitals.

A much more visible effort than his serving in a vaccine trial has been Stewart’s regular commentary on community Facebook pages in The Dalles, where he said he works to gently educate doubters about the seriousness of COVID and the effectiveness of masks and vaccines.

Stewart’s training was at Princeton in immunology, and he worked previously for the U.S. government at Los Alamos National Laboratory in the mathematics of virus transmission.

When COVID arrived in China, Stewart started warning those who knew him.

“So with what I’ve been trained to do, and what I spent the time to learn, I could detect things that were sometimes pretty deep lies from people you wouldn’t have expected to lie: Doctors, scientists, economists — people that we trust, yet they lied. They said COVID was just the flu. It wasn’t just the flu. Trusted people said warnings were just fear-mongering. Now over a half million Americans are dead. Practically every week someone was saying it was all over. It wasn’t all over. COVID won’t be all over until most of us are immune. Those who really studied viruses knew better, but it was hard to tell who was telling the truth and who was lying. So many lies.”

He described his approach as a mix of Mr. Rogers and Bill Nye the Science Guy. “Tell the truth and be kind.”

Seeing lies about the virus make him angry. He said, “I’ve come to peace with my anger. I think its OK to be angry. Some things should make us angry, but I hope they’re the things that make us angry because other people would be hurt if they’re believed. That anger is useful.”

When asked what advice he has for the future, Stewart said, “Simple. Get vaccinated. Get one as quickly as you can. They’re safe. Efficacy is through the roof. The faster we get protected, the sooner COVID will fade away, and the sooner we can all get back to being with loved ones again.”

Cycling activities get rolling for May Bike Month