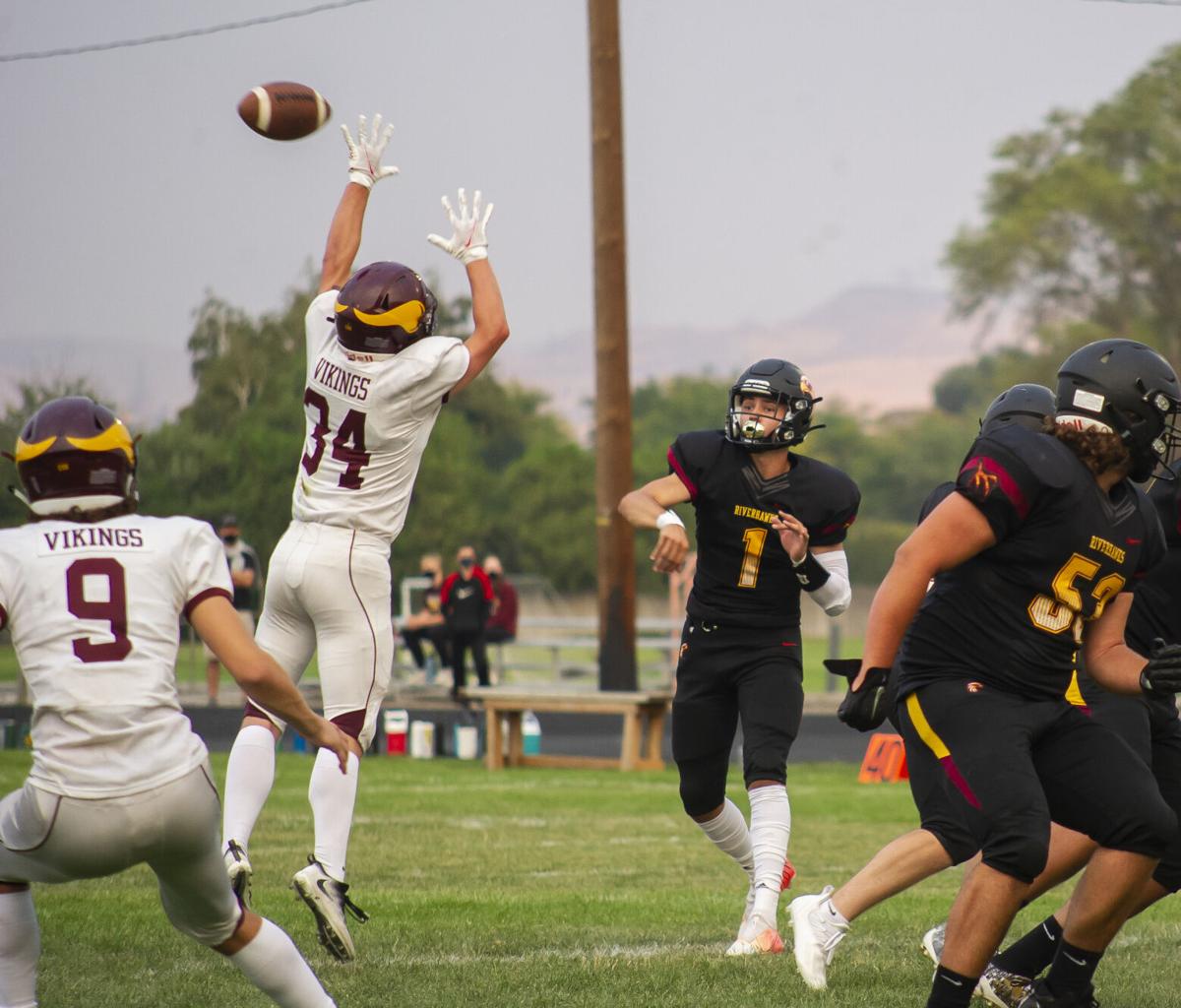 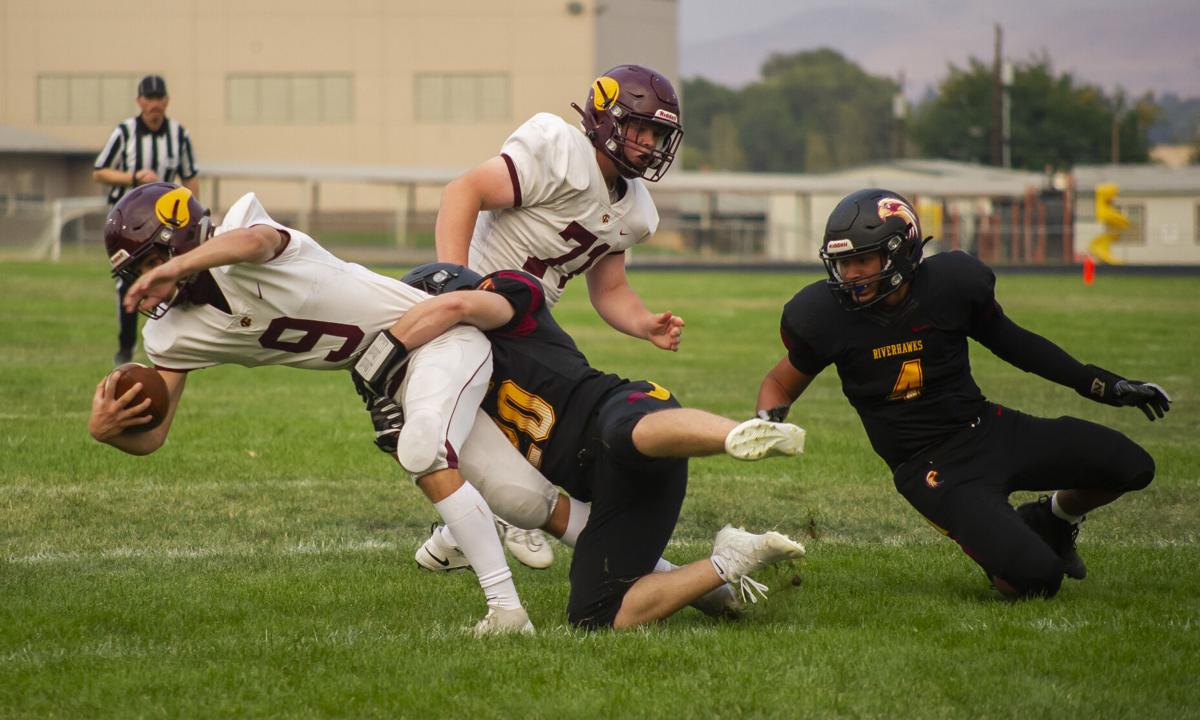 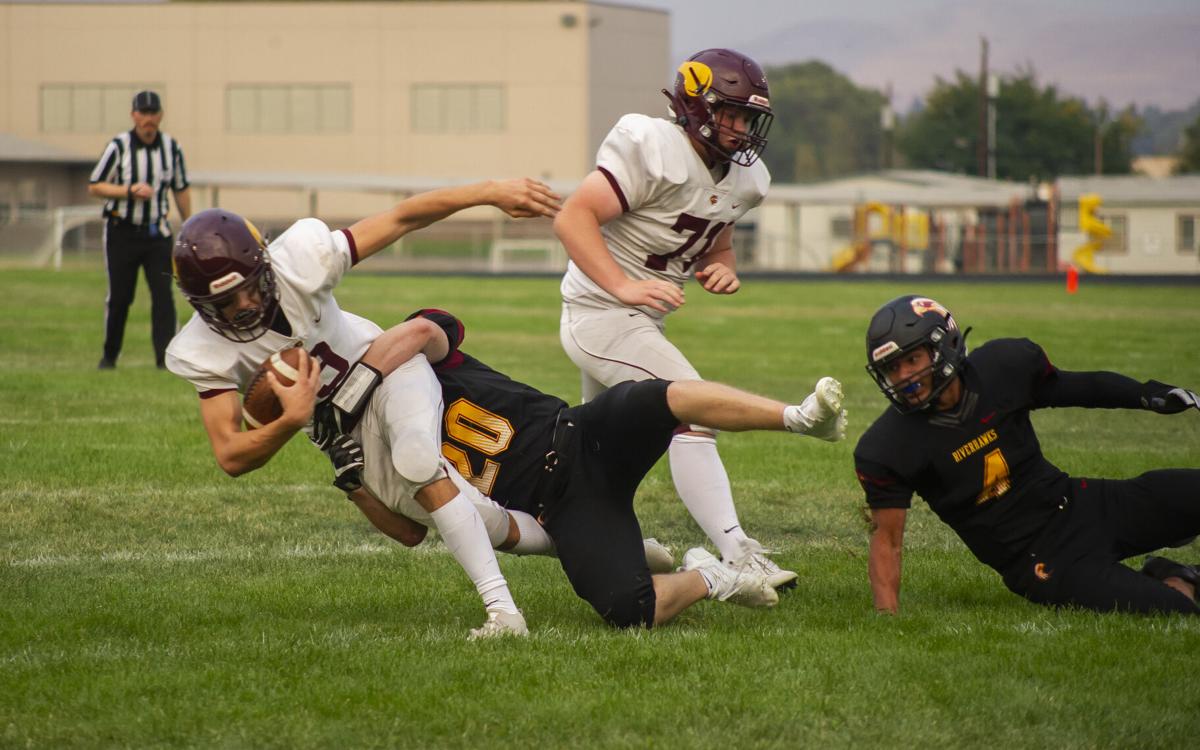 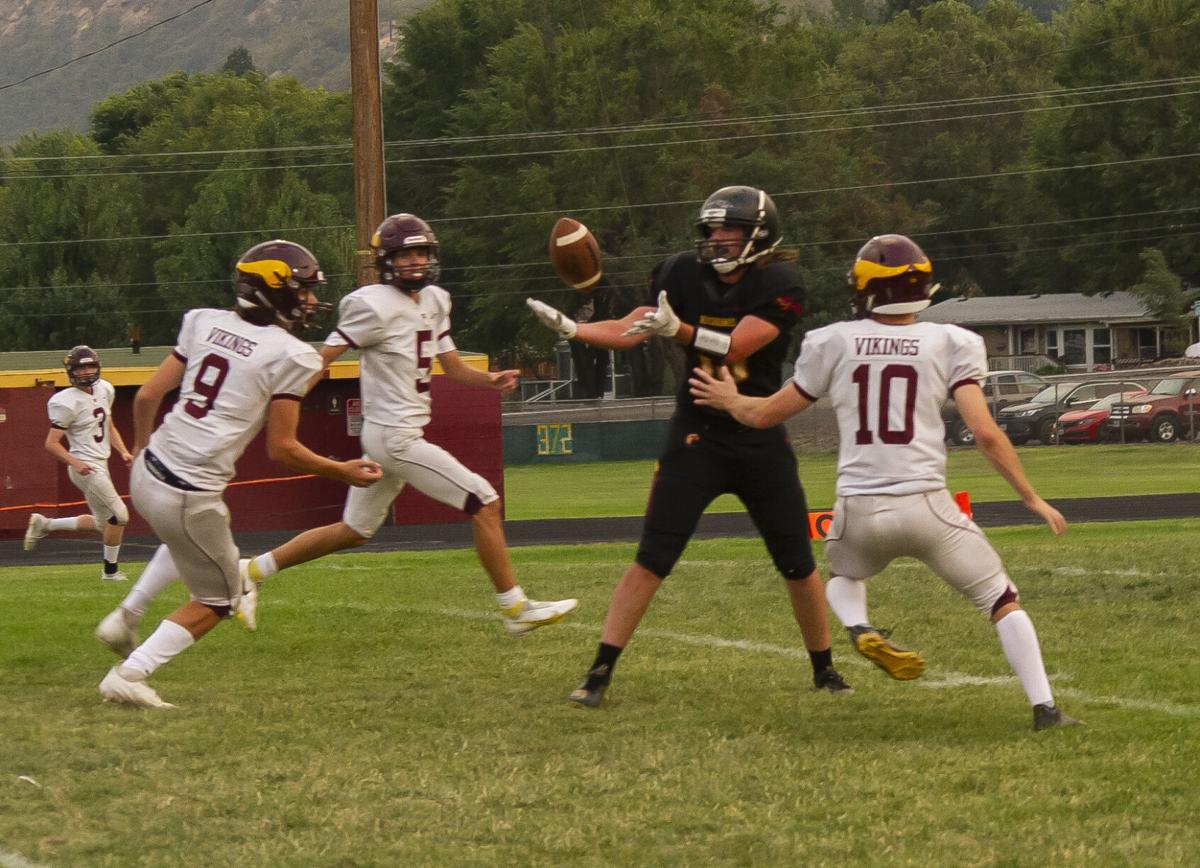 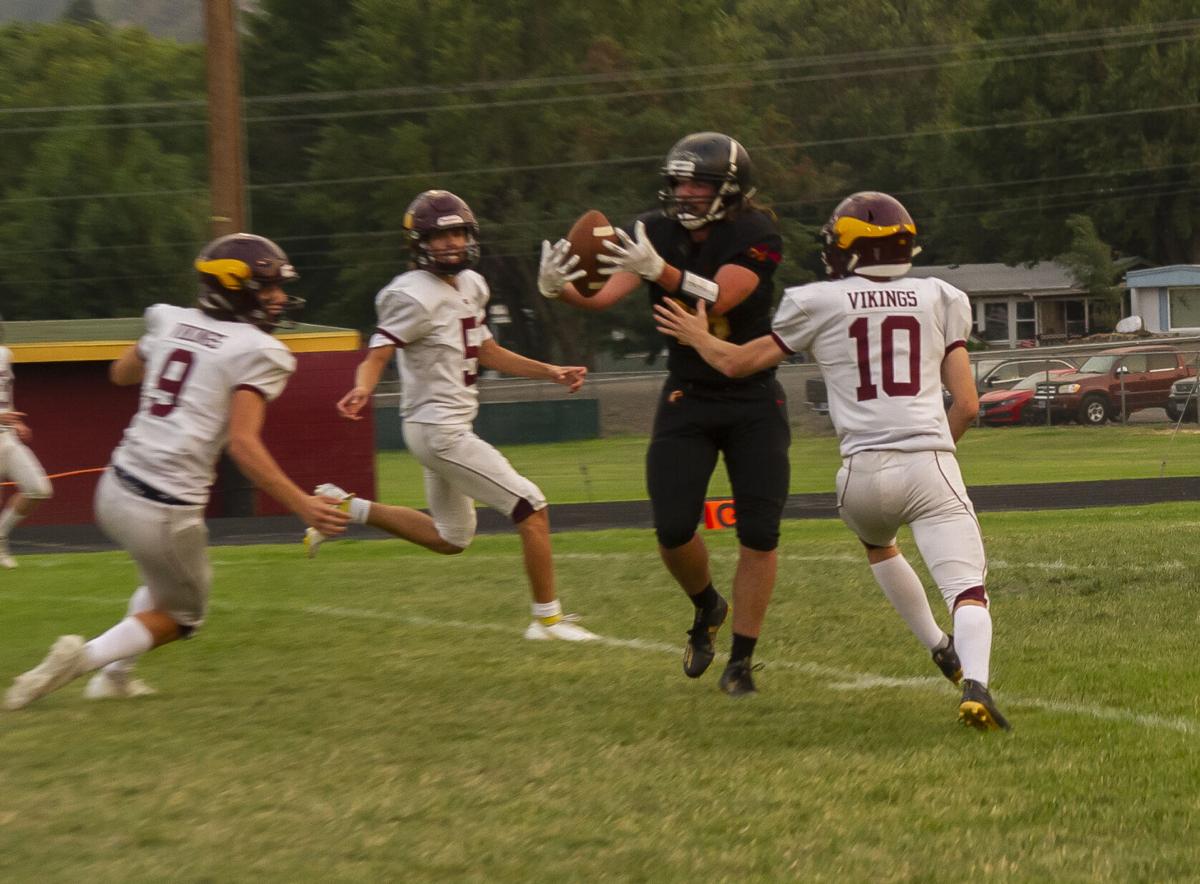 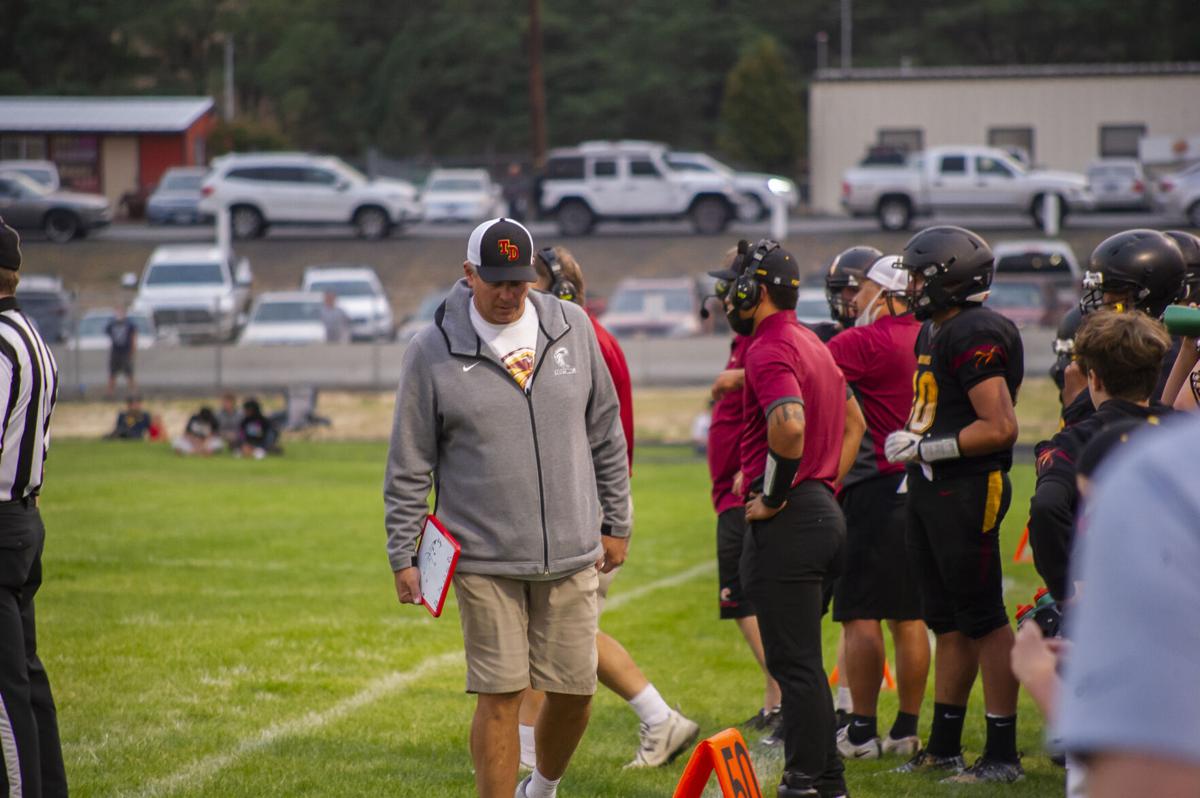 The tough Vikings stepped up their performance level a couple of notches in the second half, while outscoring The Dalles 34-0 for a 40-0 win Friday on Sid White Field at the Wahtonka campus in The Dalles. The loss spoiled the debut of Riverhawk Head Coach Lynn Helyer, who was hoping to see a little better performance from his squad.

“They (Vikings) are a pretty good team and they kind of sputtered early in the game, but they’ve got some big boys and they played a good scheme,” said Helyer. “Their defense was strong, too. We tried running the ball, but we were just half a step behind most of the time. Some of the things we’re trying to do are just not clicking yet. We’ll go back to the drawing board and keep our nose to the grindstone and keep on working.”

The Hawks will try to turn things around when they go on the road to meet the St. Helens Lions (1-0) in a 7 p.m. non-league contest Friday at St. Helens High School. St. Helens won its Sept. 3 opening contest 28-6 over La Salle Prep.

The Hawks had some golden opportunities to score throughout the game, but they were unable to convert them into points on the scoreboard.

Forest Grove (1-0) of the Special District 2 league, kicked off to The Dalles and the Hawks had an unproductive opening possession — three downs and out. Sophomore kicker Alexis Valdez punted the ball to the Vikings on fourth down, which became a scenario that was all too common though for The Dalles throughout the contest.

The Dalles had the first chance to score in the game when junior linebacker/quarterback Riley Brock intercepted a pass thrown by Viking sophomore quarterback Kaden Hale. Brock returned the ball 16 yards to the Viking 11-yard line.

With a first down deep in Viking territory, it appeared the Hawks would score a touchdown. The drive stalled at the six-yard line though, as the Hawks were unable to capitalize on the opportunity and they turned the ball over on downs to the Vikings.

The Riverhawk defense, led by senior running back/linebacker Riis La Roux (9.5 tackles) and defensive lineman Marquies Sagapolutele, was solid throughout the first half as it stopped numerous Viking potential scoring drives. La Roux sacked Hale on the Viking’s ensuing possession to help thwart the Forest Grove offense. The Hawks gained possession after the Vikings turned the ball over on downs at The Dalles 45-yard line.

For a second straight offensive series, the Hawks again appeared to have another chance to score. An eight-play, 51-yard series, highlighted by a 28-yard pass from senior quarter-back/wide receiver Jaxon Pullen (3-for-9 passing, 34 yards) stalled at the Viking six-yard line and they turned the ball over to the Vikings.

Forest Grove managed to score a touchdown with 2:33 left in the second quarter and the Vikings were on top 6-0 at halftime.

“We were right there with them, and we hung in there at halftime,” said Helyer. “The kids have a lot in the tank and they’re excited to be playing. We have to hit some of those big plays, and we have to tidy up the penalties, because we had too many of them. Some of them came at inappropriate times and it seemed like it was always whenever we made a big play.”

It didn’t take long for the Vikings to extend their advantage. Valdez booted the second half kickoff and the Vikings returned it for a touchdown, making it 13-0 just 28 seconds into the third quarter. The Vikings scored again two minutes and 16 seconds later to go up 19-0 and they led by that score at the end of the third.

Forest Grove scored 21 points in the fourth to build a 40-0 lead. The Dalles didn’t have another scoring opportunity until the final moments of the game, when a possible scoring drive stalled at the Viking one-yard line as the clock expired.

“We were kind of hoping to avoid a shutout and I let the kids call the last two plays, which is what they wanted to do, and we came up a little short,” said Helyer. “Riley wanted to run the last two plays and sometimes you have to go with whatever your quarterback wants to do and that’s what we did. A loss like this is a rough thing to handle, but it’s the first game of the season and we’ll get better. We just have to keep plugging along.”

Pullen and Brock (3-for-10 passing, 22 yards) rotated as quarterbacks as each played two quarters at that position. La Roux led the Hawks ground game as he had five carries for 35 yards rushing. Pullen had six carries for 20 yards.

Contreras’ runner-up finish paces The Dalles to fourth at Ultimook