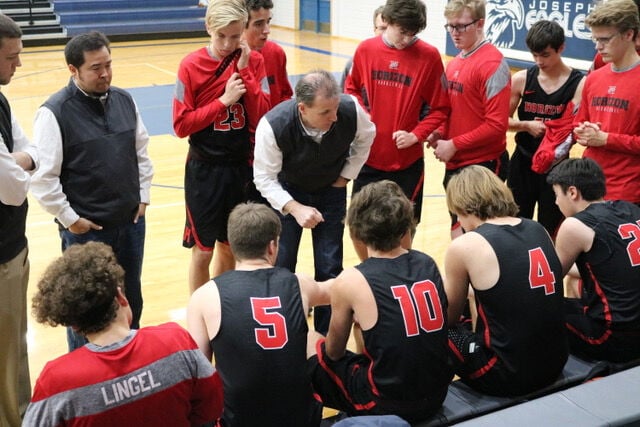 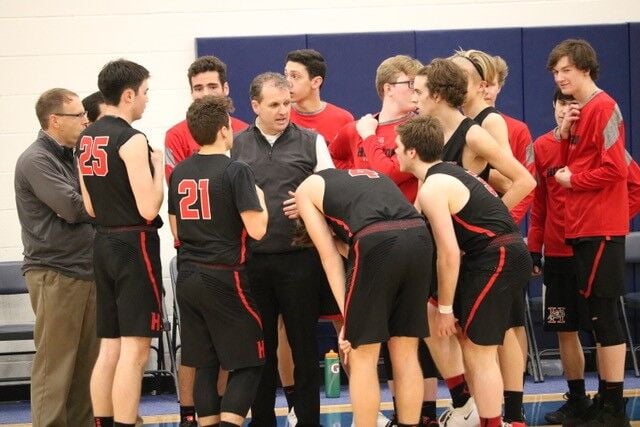 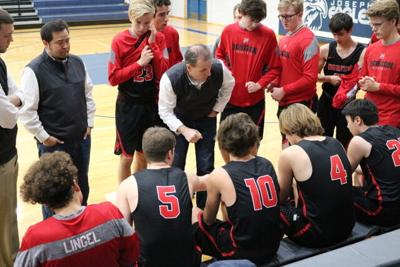 “This decision was made years ago,” Lingel said. “I said, ‘I’m going to coach until (son) Caleb graduates’.”

With a caveat: “I will always leave the door open. For right now I need to get away from the game a bit.”

Lingel, 54, said he will miss the competition and player development the most. That, "and the strategizing.”

“I’m going to miss the competition, the competitive spirit and the development of players. (But) some of the best times I had in basketball were when the coaching staff got together and strategized games at the district and state levels. The icing on the cake was when it actually worked.”

And when it didn’t?

“One of the disappointments was when, in 2013, we had a chance to win the state title against City Christian. That was disappointing not just for the coaches but the kids. We had played City in the summer and had had success against them. Then we saw them in the title game, and we couldn’t hit the broad side of the basket.

“I felt bad for the kids. They had a great year, but they ended up losing the championship game.”

On the flip side, the previous year, Horizon was the underdog against unbeaten McKenzie in the championship game and came from behind in the second half to win the title. Lingel recalled what has become known as “the play” — at least among Horizon followers.

“At the end of the game, we call a timeout and call a play,” he recalls. “We didn’t run anything close to what we drew up. We throw the ball around, almost throw it out of bounds, and Max (Totaro) ends up hitting a deep three and we went on to win the game. It was crazy.”

Horizon’s five consecutive district tournament titles — from 2011 to 2015 — has not been matched in boys Big Sky basketball. The Lingel-coached Hawks won a sixth crown in 2019.

“In our league, we have good coaches and there are always good players,” Lingel said. “(The success) says a lot about our program and the kids in the program.”

Lingel and wife, Debbie, moved from La Grande to the Gorge in 1996 to raise their family. He was a respiratory therapist for 10 years, including four years as director of Mid-Columbia Health Care Equipment in The Dalles. The Lingels purchased the Papa Murphy’s pizza franchise in The Dalles in 2000 and the sister franchise in Hood River in 2002. Off the basketball court, Lingel is known as the “pizza guy,” hawking take-and-bake pizzas on Gorge radio. Those in the business and faith communities know him as someone who is generous with his time, and know his willingness to support numerous charitable causes.

He started coaching boys basketball at Horizon as an assistant for then-coach and now athletic director Ron Haynes. Three years later, in the 2008-09 season, Lingel was hired as the head coach; his Christian faith and the faith-based school proved to be a great basketball fit.

The Haynes-coached Hawks — with Lingel as an assistant — won back-to-back district titles in 2007 and 2008. Horizon won six district championships and one Class 1A state championship during Lingel’s 11 years as head coach. His high school coaching run was interrupted during the 2015-16 season when he spent the winter coaching son Caleb’s seventh-grade team.

At Horizon, Lingel was able to coach his sons — Aaron (Class of 2010) and Caleb (2021) — and watch his daughter, Hannah (2015), play at Horizon. Always nearby was Debbie, who helped with logistics, kept statistics or the scorebook.

“Deb has been instrumental in all these years behind the scenes,” Lingel said. “We’ve always been a team. She’s a great listener.

“But she also knew there were those times when she would have to say, ‘Go talk to Mike or go talk to Joe. Don’t talk to me about that. Talk to your coaches’.”

Coaches like Mike Totaro, who Lingel refers to as his co-coach throughout the district title streak. “And (current assistant) Brian Robertson, Rick Aldrich, Wade Root, Jared Nagreen,” Lingel said. “All of them. I’ve had some great coaching staffs.”

One of Lingel’s fondest memories was beating rival Sherman for the 2012 district championship after Horizon had twice lost to the Huskies during the regular season.

“I remember talking to the boys after the second loss,” he said. “I asked them, 'If God allowed us one victory, would you want it now or in the district championship game?’ They all said the district title game. Of course, I didn’t even know we would get there. I was kind of throwing fluff. So, I said, “Let's not focus on this loss, let's focus on that then.' And we end up getting there and we beat them. It was priceless.”

A similar scenario played out in 2019, the latest of Horizon’s district basketball titles under Lingel. The Hawks had lost twice to Sherman during the regular season, but then beat the top-ranked Huskies at district. Son Caleb was a ball boy for the 2012 team and a sophomore starter in 2019.

There have been a number of players who were coached by Lingel as kids during summer camps and then would work their way up to the varsity during their high school years.

“That’s what I feel best about — developing the program,” he said. “Seeing players maximizing their full potential. That’s probably what I like the most. The wins and losses all come with that. But it’s the program for the kids that you remember as a coach.”

Lingel coached all-state players who played basketball year-round, as well as players who came out for the sport to help fill the roster or just to be a part of a team. Players like William Decker, Lingel said. “He wasn’t the best player or the most athletic,” Lingel said. “But he just kept working at it. He really shined toward his senior year. And at the sub state his senior year, we were playing at Joseph, and he took over the game. Here was a player who came off the bench, but he was a hard worker and finally had so much success.

“He just graduated last month from the Air Force Academy. He realized his potential and still does. And there are many others. Those stories are really satisfying to me.”