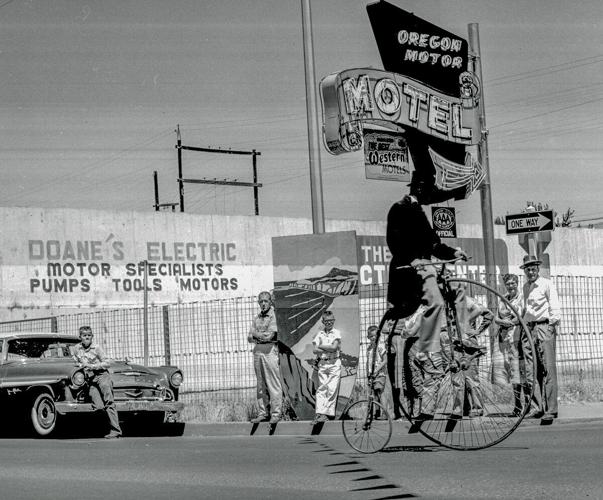 Image from the Centennial Parade in The Dalles, July 4, 1957, antique bike. Image scanned from 4- by 5-inch black and white negatives from the archives of The Dalles Chronicle. 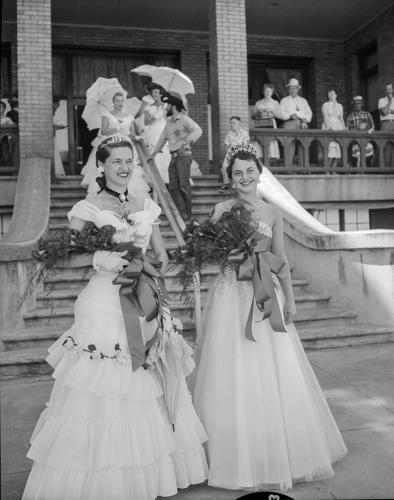 Image from the Centennial Parade in The Dalles, July 4, 1957, centennial royalty photographed in front of the Elks Lodge. Image scanned from 4- by 5-inch black and white negatives from the archives of The Dalles Chronicle. 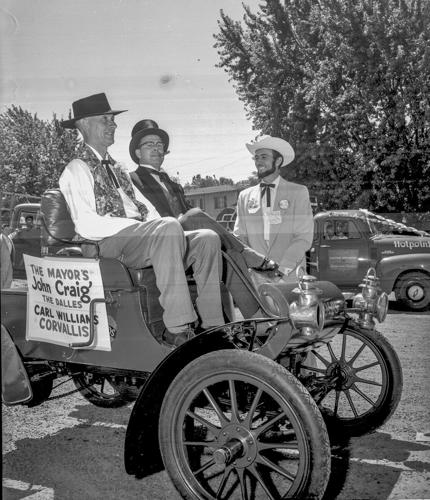 Image from the Centennial Parade in The Dalles, July 4, 1957, “The Mayors,” John Craig of The Dalles and Carl Williams of Corvallis. Image scanned from 4- by 5-inch black and white negatives from the archives of The Dalles Chronicle. 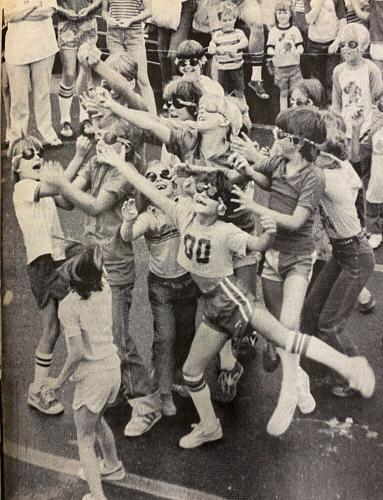 This was the scene Saturday as the younger set attempted to outwit Pat Carson and grab the raw eggs he was dropping from an elevated platform in the second annual egg drop conducted by KODL radio as part of the Crazy Days celebration in Cascade Square. — June 29, 1982, The Dalles Daily Chronicle

Judging from local activity, the coming fall will witness quite a local boom in radio. Many are seeking information on the cost of sets and announce they will install radiophones as soon as the heavy summer work is over. Quite a number of local boys have been in competition to ascertain who could first make a long distance receiver and the honor goes to Leonard Thomson, who had advanced far enough with his set this week to “get” Seattle and listen in to the concert broadcasted by the Post-Intelligencer. — Hood River News

An advance of 2 cents a pound to the grower on all cherries delivered to the Oregon Growers association prior to last Saturday, was announced today by Manager C.R. Thompson. This is the first advance of the season and will be followed by further payments as returns come in. Seven cars of cherries already have been shipped to eastern markets by the cooperative, and two cars will go out tonight, Thompson said. — The Dalles Daily Chronicle

Snow in the mountains, which from the eastern border of Hood River County are deeper this June than in many years, according to Forest Ranger Eric Gordon of Dufur, who was recently in the higher county near Lookout Mountain and Badger Lake. He found all roads to Badger Lake still blocked by deep snow and in some places the drifts were more than six feet deep. On the mountain road between Lookout and High Prairie, snow depth ranged from two to ten feet. — Hood River News

In common with all other communities throughout Oregon and the nation-at-large, retailers of The Dalles will observe a 15-minute “whiteout” here tomorrow noon and will sell nothing but savings stamps and bonds of the counter, beginning at 12 o’clock and ending at 12:15. — The Dalles Daily Chronicle

The first step toward the paving of areas at two Hood River Schools and the purchase of a new school bus were approved by the board of directors of School District No. 3 during the past week. Monday evening, the board awarded the paving jobs to Interstate Paving Co. of The Dalles. The projects include playground areas at Coe and May Street schools. The jobs will cost an estimated $3,200. Purchase of a 73-passenger GMC bus, a used vehicle, was purchased from Byers Motor Co. for $12,035. — Hood River News

Operators of union barber shops in The Dalles said today they do not plan to raise prices to correspond with those in Portland. Barber Union Local 895 announced that haircut prices will remain at $1.75 for adults and $1.50 for children. — The Dalles Daily Chronicle

Rain in the Mid-Columbia during cherry picking time is greeted with dismay by concerned orchardists. Last weekend’s raindrops were small enough in number to have caused negligible damage, however. About a quarter inch of rain was reported. Also in the cherry growers’ favor was the stage of development of the cherries, according to Dave Burkhart, agricultural extension agent. Most of the Lamberts aren’t to the picking stage. The early Royal Annes received from 1-3 percent splits in some areas, he said. — Hood River News

Weekend rain has caused some splitting of the fresh cherries but for the most part it appeared to be minor. Jack Thienes of The Dalles Cherry Growers said the most serous damage appears to be in the Mosier area, where orchards either got heavier rains of higher temperatures right after the rain. — The Dalles Daily Chronicle

There is a new addition to medical facilities on Skyline Hill. This spring the White Salmon office of Klickitat County Mental Health and Alcohol Services moved into a mobile unit joining Skyline Hospital and Mid-Columbia Family Health Center at the site, a move officials say will enhance the working relationship between the three. The mental health and alcohol counseling and developmental disabilities services offered out of the former location in Bingen will continue at the new facility. The new location is handicap-equipped and also energy efficient. — White Salmon Enterprise

The postage rate for first-class mail rises from 34 to 37 cents tomorrow, the third increase in 18 months. Three-cent “Star” stamps will be available to add to leftover 34-cent stamps. According to Hood River Post Office Supervisor Mike Winder, it’s mostly businesses that are interested in the three-cent stamps, since they buy their postage in bulk and have lots of leftovers. — Hood River News

Signs lauding the newly-formalized sister city relationship between The Dalles and Ikeda, Japan, were installed at two locations downtown. The signs were donated by Meadow Outdoor Advertising, which also created the artwork. — The Dalles Chronicle

On June 28, Ensign Mark Lampman, U.S. Navy, graduated from the Basic Seal (Sea, Land, and Air) training at the Naval Special Warfare Center in Coronado, Calif. Lampman is a former White Salmon resident. He graduated from Columbia High School in June 1995. After enlisting in the Navy, he attended the Naval Academy Preparatory School to strengthen his academic background while the Navy paid him approximately $1,000 a month. He graduated from the Naval Academy at Annapolis, Md., in June 2001. Out of 180 navy personnel who started the rigorous SEAL training, only 32 graduated, Lampman included. — White Salmon Enterprise

You’ll Have To Hunt For Circus Tomorrow

All Details Settled But Site; Water Over Old Grounds

The Dalles is going to have a real circus tomorrow, but up until a late hour this afternoon the location of the big tent and sawdust rings was not known.

The advance agent was here several days ago, and made all of the arrangements, even to obtaining a city license, except the selection of the site. The city property on the beach, commonly used for tent shows, is now suitable only for an aquatic carnival, due to the high water, leaving the old baseball park on the hill and the grounds west of the city on the Columbia River highway, used last fall for the county fair, as the only possible alternatives.

Howe and Van Amburg’s “great London circus,” after playing in Hood River, is said to have gone to Bend and the circus train will arrive in The Dalles tomorrow morning.

Apparently circus-goers — and there will be many of them, for The Dalles is circus hungry — will be forced to guess at the location finally decided upon, or ask a convenient small boy. It is a safe bet that every small boy in town will know all the details regarding the circus, from the minute the flamboyant red cars come into town until the last elephant has been tucked away, and the trip to the next city started.

A parade will be held at 10:30 in the morning through the principal streets of the city. — June 28, 1922, The Dalles Daily Chronicle

When that registration is completed, the government will have a record of 43,000,000 men — every male in the country between 18 and 65 years of age.

The youngsters registering tomorrow will be given the same set of questions already answered by their elders. They will be asked their name, residence, and mailing addresses, date and place of birth, and their employer’s name and address.

There will be no lottery to determine the classification of the new 20 year olds. Local draft boards will simply classify them by the dates of birth. The oldest will be called first. — June 29, 1942, The Dalles Daily Chronicle

Republicans Will Not Stand For Clan (sic)

The hopes of the Ku Klux Klan to cut a figure in the state Republican convention received a severe jolt last Friday, when the three K aspirant, A.H. Lea, polled only 6 voters against 30 of Walter L. Tooze Jr., who was chosen chief. Two of Lea’s votes were cast by A.A. Bailey, the Klan delegate from Multnomah County, who left the meeting immediately after he learned how the ballot had gone.

After discussion, it was decided by the meeting, which included delegates from every county in the state, that the Republican ticket from top to bottom should be recommended to every Republican in the state. It was also decided that every effort will be made to triumph in the general election in November in the face of any other influence that might be injected into the election.

The election of Walter Tooze came after several days of campaign. The Ku Klux Klan was anxious to obtain control of the state committee, but in view of the attitude of that organization against Governor Olcott, an overwhelming number of state committeemen decided to play safe and support the ticket. Tooze, who supported Patterson in the primaries, was proposed by E.E. Blanchard of Josephine County, and was seconded by Roy D. Smith of Hood River and E.C. Kirkpatrick of Polk.

Bailey, on behalf of the KKK, proposed Lea, had obtained the proxy of A.V. Swift of Baker by some means and said he represented 9000 voters in Portland. He threatened to bolt the convention unless Lea was elected and when he did bolt, nobody tried to stop him.

In offering Tooze, committeeman Blanchard declared that Republicans cannot permit trifling differences of opinion to injure their party and “when in the booth at the election, with your conscience and your God, you will stand for the Republican party and let nothing interfere.” — June 30, 1922, Hood River News

British Forced Back in Struggle for Egypt