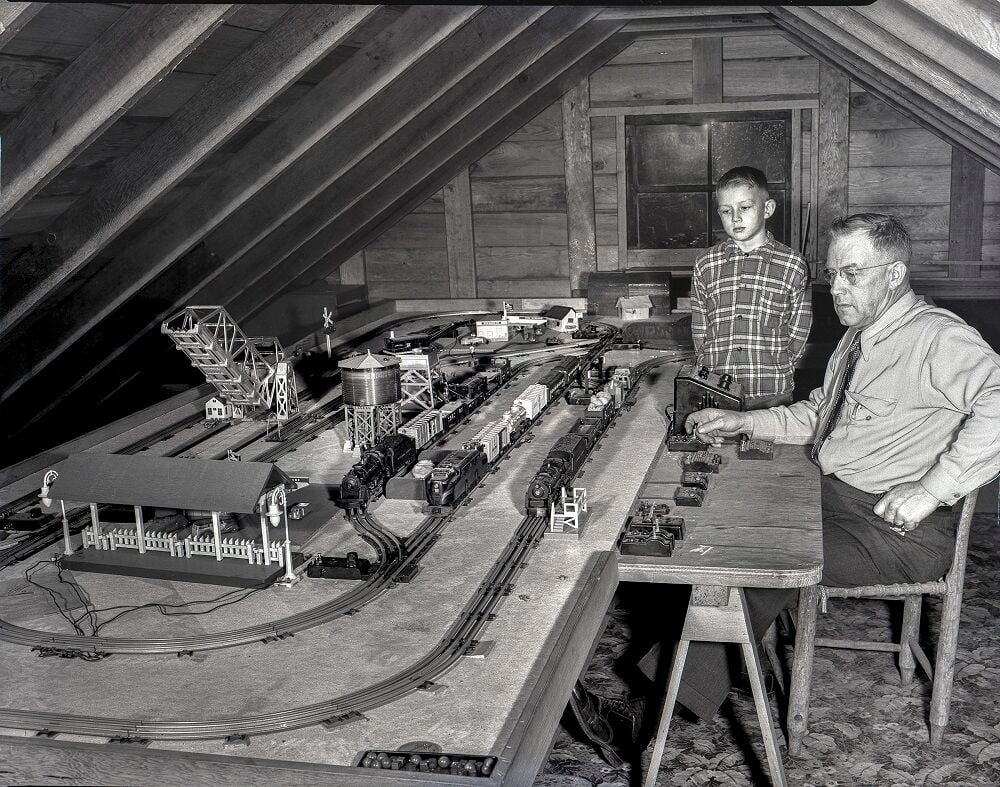 An electric train occupies a loft in this Dec. 22, 1948 newspaper photograph by George Lindsay of The Dalles Optimist. The image was scanned by from a 4-by 5-inch black and white negative. Information on the envelope included the date and the name “Gap Woodworth.” 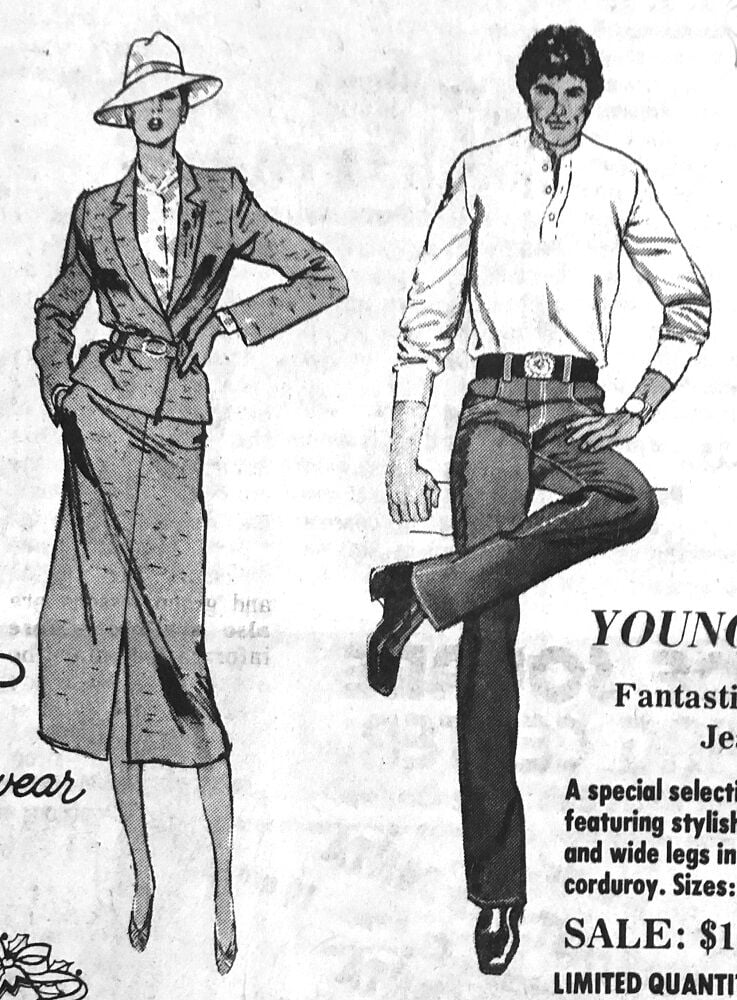 Fashion detail from a 1960 The Dalles Daily Chronicle. 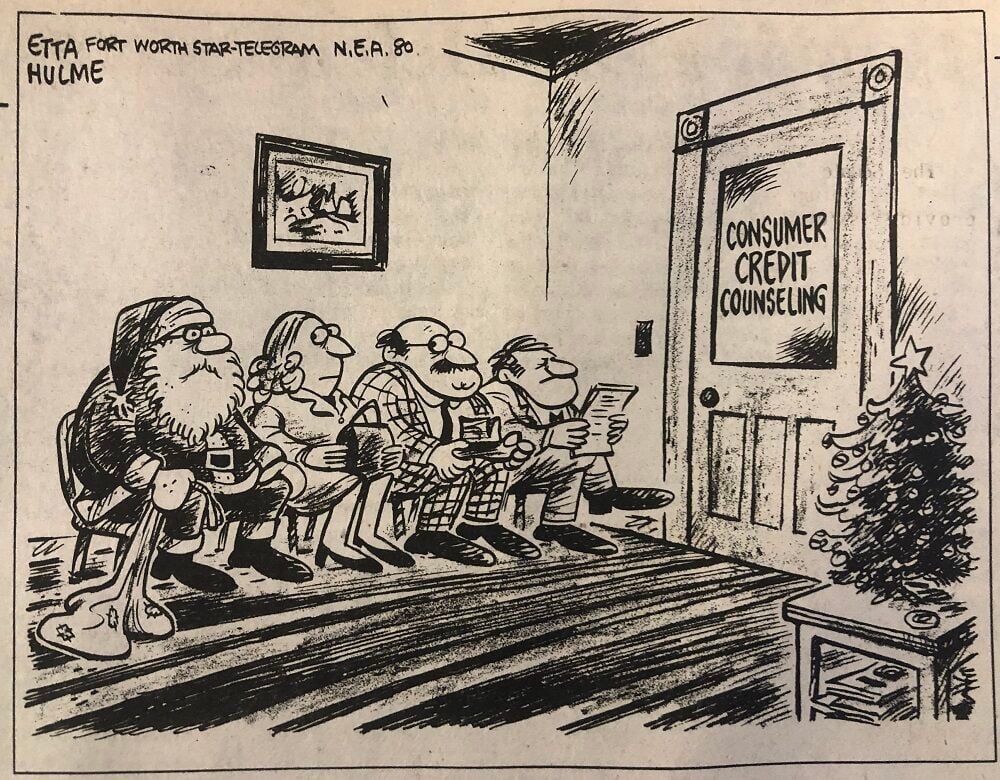 Editorial cartoon from a 1980 The Dalles Daily Chronicle.

An electric train occupies a loft in this Dec. 22, 1948 newspaper photograph by George Lindsay of The Dalles Optimist. The image was scanned by from a 4-by 5-inch black and white negative. Information on the envelope included the date and the name “Gap Woodworth.”

Fashion detail from a 1960 The Dalles Daily Chronicle.

Editorial cartoon from a 1980 The Dalles Daily Chronicle.

In order to secure an appropriate name for the new tourist hotel now being built on the highway at the edge of Hood River, Henri Thiele is offering prizes of $50 and $25 for the two best names submitted. Rules governing the contest require that the name shall be brief and descriptive. Only American and Indian names will be considered. Foundations of the building are now complete and builders expect that it will be open to the public by May 1 next year. — Hood River News

The long expected “protest” to the board of control of the State Athletic association by the Salem football team over the game won by The Dalles on the local field Nov. 25, has finally eventuated, but in an entirely different form than was expected. Instead of claiming the game on the grounds that The Dalles players walked off the field without completing the game, as Salem high school officials had announced they would do, Salem makes what is considered a far more serious charge; that The Dalles players displayed an attitude in the game ... which is “prejudicial to the interests of clean and sportsmanlike athletics.” — The Dalles Daily Chronicle

The problem of what to give for Christmas to distant friends can be solved through the medium of Gift Boxes of Apples and Pears, now available through the Apple Growers Association. These boxes, of most attractive design, each containing 18 specially selected Delicious, Ortley and Spitzenberg apples and D’Anjou pears, are 95 cents per box, but the Association will ship these gift boxes to any destination for the additional express cost. — Hood River News

From 585 paid subscribers in 1916 to an accredited subscription list of 2,652 in 1940! Such is the march of progress of The Dalles Chronicle since the ABC audit of circulation first was incorporated within its business policies some 24 years ago. —The Dalles Chronicle

Carol Marchbank slapped the chill from her bare arms and cocked a bright grin at the long ribboned rows of candy canes that fenced in brightly decorated rows of homes down the street past her Seventh and Montello Street home. “Golly, since we started this thing, I know everybody who lives within three blocks of us — before I bet I didn’t know half of them!” It was a happy thought as it must be to the 17 families whose unique idea and initiative in follow through effort created Candycane Lane, Hood River’s brightest Christmas idea in recent memory. — Hood River News

“No blood in the bank” is bad news that can be avoided by heavy turnout of donors at Friday’s blood drawing here, the sponsoring Dalles Ministerial Association pointed out today. — The Dalles Daily Chronicle

As Dalles City’s recently completed sewage treatment plant prepares for an official open house, the Oregon State Sanitary Authority has added another step to its operation. Since the sparkling new plant is near the lower Columbia, it must, by May 1 be able to treat with chlorine daily plant effluent drained into the river. — The Dalles Daily Chronicle

The lumber industry in Hood River County is vacillating with the current recession and one local mill is operating with a skeleton work force this week while another is at 60 percent reduction, and the third major mill is running at 100 percent capacity. The Dee Hardboard Plant is operating with a skeleton crew this week during a temporary shutdown of production, plant manager Dick Davis said Wednesday. He said workers were sent home for the week in a downturn of production that was similar to what occurred in the recession of 1974. — Hood River News

Seventeen names have been received by Port of The Dalles whose board of commissioners will select one person to fill a vacancy caused by the resignation of Dick Hyde on Nov. 12. — The Dalles Daily Chronicle

(1979) Monica Smith spends many of her days sitting in area classrooms observing students. Smith is called in by teachers who encounter a student with disabilities, varying from a student’s inability to read at their grade level to emotional problems that can hamper classroom learning. Smith administers a variety of written, oral and manipulative tests to students in grades one through 12, which help determine an area of learning disability. “Then I will recommend materials or approaches that should be taken with the student to assess what their strengths are. We try to find solutions that will strengthen those weaknesses.” — White Salmon Enterprise

Lynn Mitchell’s chemistry classroom at Hood River Valley High School was a clutter of dye bottles and soggy t-shirts this week. Students wearing plastic gloves milled around the room advancing their scientific knowledge by … making tie-dyes? “It’s good chemistry,” said teacher Lynn Mitchell. He should know because he just received the Outstanding High School Teacher award at the annual Oregon Science Teacher’s conference in Newport. The award is given only to one high school science teacher in the state. “It was a complete surprise,” Mitchell said. “I didn’t even know it was happening.” — Hood River News

Annexation of portions of Hood River County into the Columbia Gorge Community College District saw a key advance Friday in Salem, with conceptual approval by the Oregon State Board of Education. Board members approved a resolution to cooperate with a citizens’ advisory committee in Hood River County toward the goal of annexing parts of the county not already served by a college district. — The Dalles Daily Chronicle

Construction of the White Salmon in-lieu fishing site is in high gear on the Columbia River shore west of the Hood River Toll Bridge. Colville Tribal Services is overseeing the project, with support from the Army Corps of Engineers. The site will feature a new boat ramp, camp sites, and a fish drying shed. — White Salmon Enterprise

The unusual in Christmas decoration is drawing much attention to the windows of Eby’s Food Store, corner of State and Second Streets.

Norman Tucker, well-known young artist, has used the windows of this store as backgrounds for two of the best-known Christmas themes: “Shepherds Watched Their Flocks By Night” and “The Journey of Santa Claus.” The pictures, incisor, are of broad design and testify to the pictorial ability of Norman.

Sub-freezing temperatures outside and condensation of moisture inside the windows furnished Willis Eby with a real problem, to keep the colors from running. However, he secured a big electric fan, draft from which has kept moisture on the windows down to a minimum. The window decorations are only part of the Yuletide picture, as a visit to the interior of the Eby Food Store will convince all.

Transfer of the witness chair in the circuit courtroom from behind the bench to an elevated platform facing the assembly hall was completed Saturday. Shifted for the purpose of facilitating the work of the court reporter in recording testimony, the relocation also will make such testimony more clearly audible to members of the jury and others assembled at court sessions.

The alteration, one of the first effected in the courtroom in many years, today brought reminiscences of how and when the courthouse was originally constructed. Actual work on the building was commenced in May 1912, after preliminary preparation and completion of first contracts had been approved under the supervision of County Judge A. E. Lake, Commissioner C. H. Stoughton and H.C. Rooper, and Judge Fred W. Wilson, then district attorney for the Seventh Judicial District. The Hon. W. L. Bradshaw, circuit judge at that time, also assisted with the supervision.

The firm has contracted to replace the shabby wooden structure at the crossing of Dethman Ridge Road and the Loop Route with all-steel supports and railing.

The bridge has been condemned “for about two years” and will be renovated during this fiscal year.

Textile Worker’s Wages To Be Slashed

Putin says he will pardon businessman