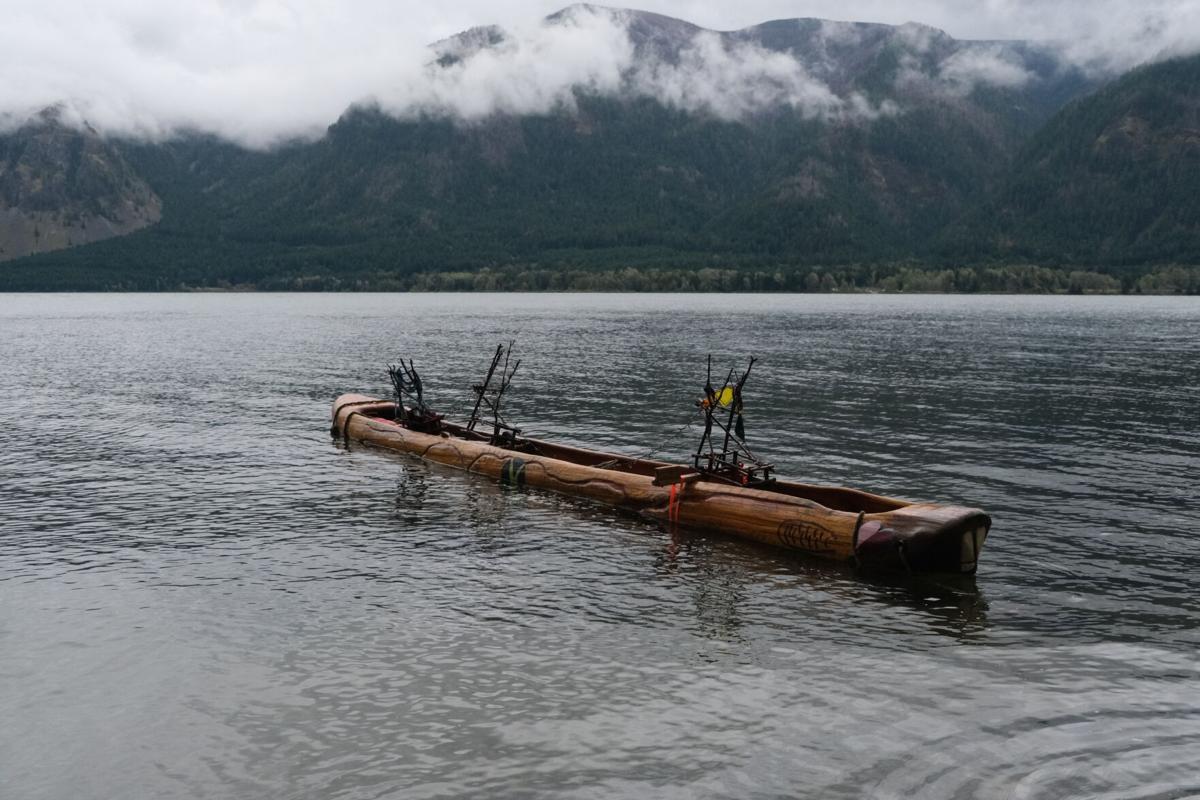 New Medizen floats near Home Valley, Wash., while waiting for a storm to pass. 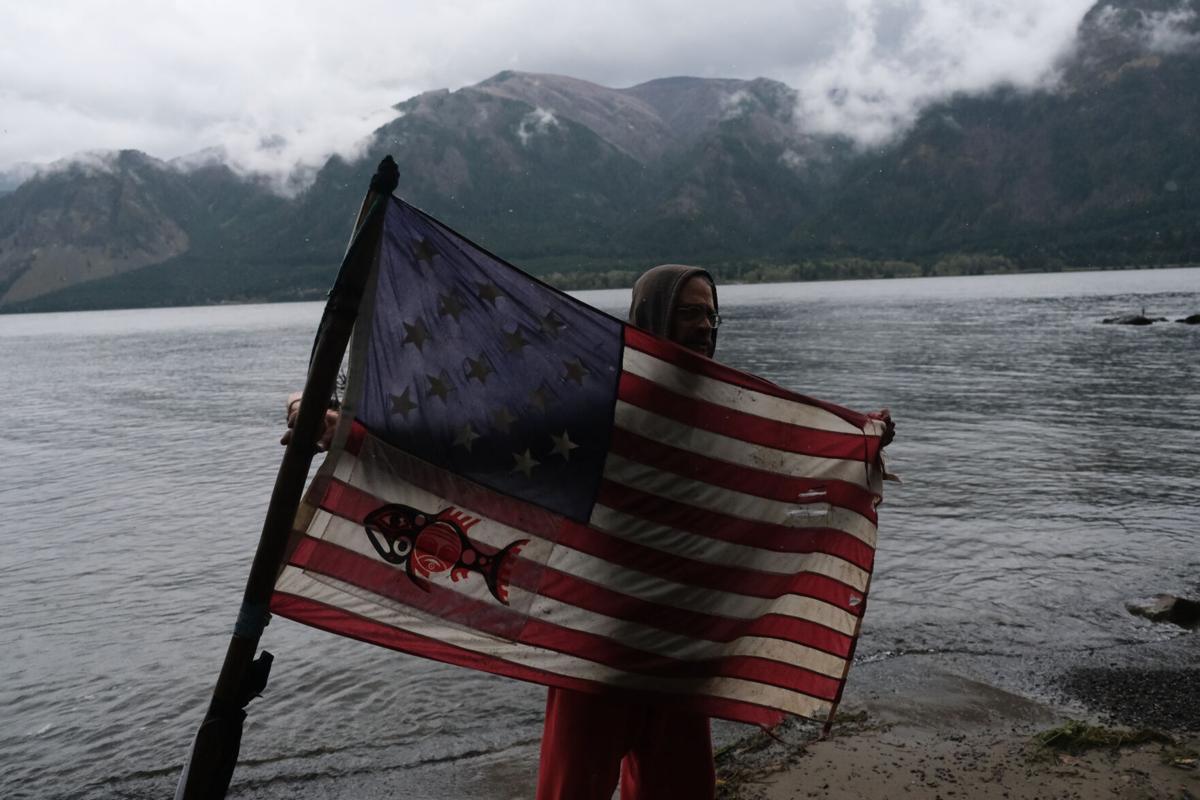 Willow Bill displays his replica of the Star-Spangled Banner flag that was flown during the time of the Lewis and Clark expedition of 1804-1806. Stitched onto it is the flag of the Chinook Indian Nation. Can you spot what makes this flag unique?

New Medizen floats near Home Valley, Wash., while waiting for a storm to pass.

Willow Bill displays his replica of the Star-Spangled Banner flag that was flown during the time of the Lewis and Clark expedition of 1804-1806. Stitched onto it is the flag of the Chinook Indian Nation. Can you spot what makes this flag unique?

Willow Bill hadn’t always been a “water guy,” but now at the age of 51, he is making his second trip down the Snake and Columbia rivers to the Pacific ocean and back in a handmade canoe, recreating the final stretch of Lewis and Clark’s famous expedition of 1804-1806.

The first trip he took along this route occurred from 2004-2005, in celebration of the bicentennial anniversary of the voyage. As a walk-on to the expedition, he, along with a crew of other adventurers, traveled from Missouri to the Pacific Ocean and participated in historical reenactments and other celebratory events.

A desire to connect with the folklore of the Lewis and Clark journey, as well as to prove their own beliefs about alleged errors in the Lewis and Clark accounts led Willow and his friend Charlie to begin preparing for the bicentennial event. Asked what spurred this desire to complete the trek, Willow said that they believed there was a discrepancy with the setting for one of the events occurring during Lewis and Clark’s journey.

“We recognized that the whale does not wash ashore on Cannon Beach. And if you literally read the first eight journals, it says the whale washed ashore on the Nehalem River,” Willow said. At the time, he was a resident of Wheeler, Ore., situated on the Nehalem River, and president of the Wheeler Business Association. He said he saw “50 mom-and-pops come into Wheeler to start a business and fail within a year. You don’t fail in Cannon Beach. All the people are there.”

That is what led Willow to make the journey to Missouri to join the expedition as a walk-on. It was something out of the ordinary for him to do, but felt he had to show up to learn more about the journey and to represent Wheeler. He called his crew from Wheeler “The Wheeler Whiskey Rebellion.”

“We’re reenacting Lewis and Clark but we’re living what they lived,” he said.

A successful journey made its mark on Willow Bill. Since the first expedition, Willow had taken a liking to rowing a canoe; he has rowed back and forth between Bonneville Lock and Dam and Young’s Bay 13 times.

Within the last couple of years, Willow was diagnosed with Stage IV colon cancer. Since then, he has been through 12 rounds of chemotherapy, and last year, around Thanksgiving, medical personnel extracted cancer cells and inserted a chemo port on the right side of his chest.

Around that time is when he began building his second canoe with another friend. Done as a favor for the Hells Gate State Park to replace another vessel they had displayed on site, they carved the canoe out of a 28-foot Western Red Cedar. It displays handcrafted images, including a willow tree, a peace sign and a beaver. Selfishly, he admitted to himself, the job was done as a way of “fighting this cancer demon.” The surgery had taken a toll on him.

“Then, as I was coming back to life,” Willow recalled, “the Lord said to me, ‘Go get that canoe and drive it down to the ocean; you know, do your thing, brother.’”

From there he felt compelled to begin preparations for the long journey. This time around, he started out with a three-person crew, and from 20 miles out, ventured solo.

In the canoe he crafted, christened “New Medizen,” Willow has been rowing from Lewiston, Idaho, since June 6, “stealth-camping” when needed and hitchhiking through the many dams along the way for more than 10 weeks. He plans to make it to the Pacific Ocean, then to Portland, where he is scheduled to undergo another surgery to remove the chemo port that was inserted last year. Last weekend, Willow rowed past Home Valley initially, planning to make it another couple miles down the river to the next area to dock, but the wind picked up, a sign of the impending weekend storm, and he decided against it, paddling close to a mile back to the small beach. He would wait out the storm there in the meantime.

After making camp at the Home Valley Park and Campground, just outside Stevenson, Wash., Willow discovered he had a mission to accomplish in the area. Perhaps serendipitous, or maybe planned all along in the back of his mind, a thought occurred to him that he knew somebody with whom he connected during the bicentennial trip. Upon inquiring at a local grocery store, he discovered someone named Bill who, like Willow, taught youths to row canoes and had rowed one of his own down the Columbia river. It was at this stopping point in the Columbia River Gorge that Willow decided to reach out to local news organizations to talk about his journey so far.

“I don’t know where this thought came from or if the canoe was joking with me, but the canoe and grandfather wind got my ass spun right back around here,” Willow said.

Excited by the prospect that he had found this person with whom he bonded 15 years ago, he invited Bill out to the campground to reconnect and talk about the journey.

Come to find out, Bill was not the same person he was thinking of. In fact, Bill LaCombe is a CTE teacher at Stevenson High School, who, like Willow Bill, rowed the Lewis and Clark route.

“The vision was here, it was just unclear,” Willow remarked.

Upon further discussion, Bill LaCombe, Willow Bill, and another fellow canoer named Monty had made plans to arrange a vessel to tow Willow Bill and New Medizen through the Bonneville Locks.

The unexpectedness of this meeting underscored the journey so far. “It was a zillion to one,” Willow exclaimed, that he could find someone out here, with the same name as him, who also rowed the Lewis and Clark route, and who could provide this much help. “How did I get stopped here for that? I was out here for a completely different reasons, yet it was exactly the same reason. And neither one of us knew each other. And we’re both named Bill ... This happened to me everywhere I went. I got spun around because I was supposed to meet Bill LaCombe,” Willow said.

“This trip has been so spiritual,” Willow remarked. “It’s been about reaching out for help when you need it.”

At virtually every stop he has found something to marvel at: An adventure, or coincidences, things of that nature. Early on in the trip, he had to take a month off to take care of family members in need of help. At the Lower Monument Dam, he saved a family of eight from a collision with the dam.

Willow had been camping near the dam when he heard yelling, so he peered through his grandfather’s binoculars out towards the dam and discovered that a family of eight on a boat was floating towards the dam, unable to control their vessel. Their battery had died, it turned out. After directing a fisherman nearby to signal SOS to the dam operators, Willow ran down, hopped in the canoe, and paddled.

It took him 12 minutes to meet them in the water, he said, then directed the group to come aboard the canoe, and paddled the few who could transfer to the canoe back to shore.

By that time others had responded to the incident, rescuing the rest of the stranded family members.

Another 50 miles down the river, a snake entered his tent, and he felt compelled to let it slither around, rather then shoo it away or kill it, like he normally would have, since he hates snakes. “I couldn’t kill a snake on the Snake River,” he said.

Another time at Devil’s Bench State Park near the Lower Monument Dam, he was planning to brand hearts, made out of tree branches, at night. Someone came up to help him, and lo and behold, that person’s name was Moses.  On the Snake River in the middle of the hot summer, Willow recalled, his cooler held ice for “52 out of the 54 days.”

A bartender and server by trade, and youth arts instructor by passion, Willow Bill — born William Goulardt — first became known as Willow by starting a local tradition in northern Nevada. Each year he handcrafts hundreds of reindeer, crafted out of willow branches, and performs presentations at surrounding schools, teaching youths the value of handiwork, and taking pride in the work set before you.

“You know what, I’m about uplifting people … we’re here to uplift people. It’s what we should be doing,” Willow said.

He expressed that while he crafted the canoe for more personal reasons, he asserted that the trip is about making the canoe work, and connecting yourself to a higher purpose.

“This isn’t about, ‘Can I go do this myself?’ This is about, you know … we get the log to where it needs to go. It’s about the canoe. We get the canoe to where it goes, then we’re successful,” Willow said.

“New Medizen … is something this whole world needs. We need a new zen, a new karma,” he said.