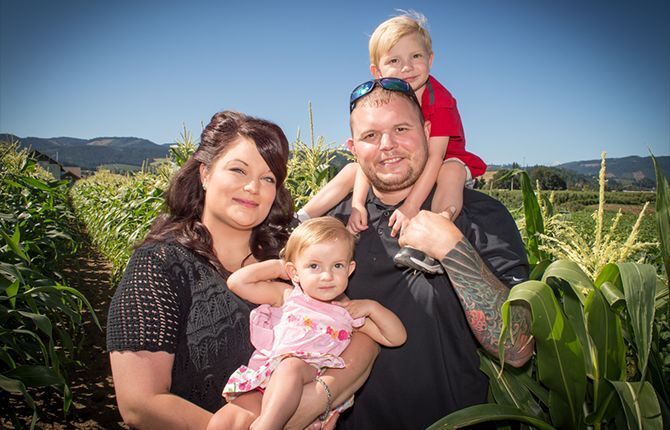 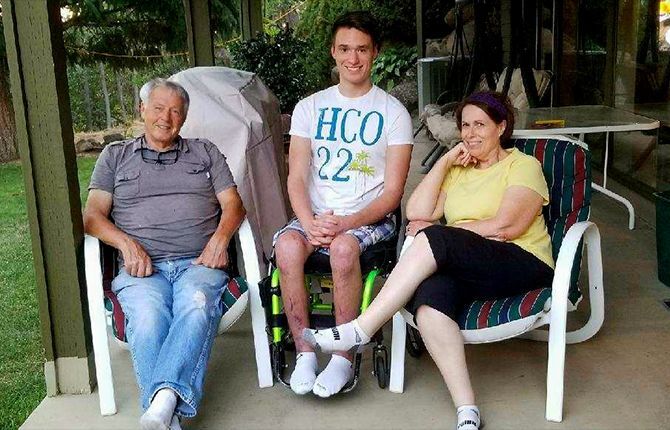 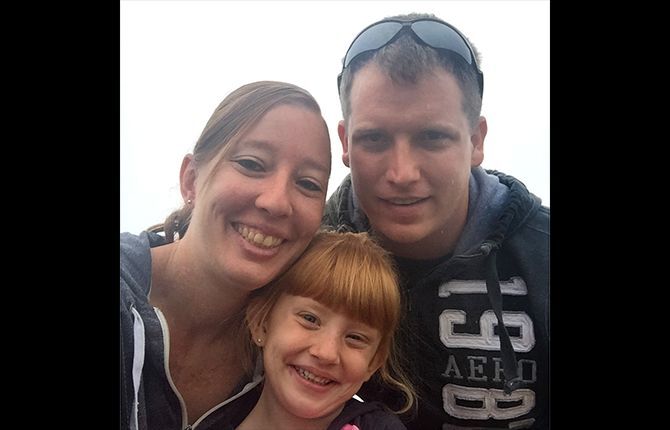 For the first time in its 15-year history, the Pig Bowl, a fundraising flag football game featuring local law enforcement, is donating proceeds from its Sept. 23 game to three families.

Proceeds from the game have grown over the years —donations have totaled nearly $250,000 overall — and while the Pig Bowl has benefitted two families in the past, the three finalists this year proved too difficult to narrow down further, said organizer Michael Holloran, an Oregon State Police trooper.

Beneficiaries of this year’s event include Noah Messenger, an 18-year-old from Goldendale who fell 60 feet down a cliff in May, breaking his back; Amelia Hutchinson, a 4-year-old from Oregon who has finished treatment for a very rare, very aggressive, but very treatable form of cancer and now the family is waiting to see if she remains in the clear; and Skylynn Bichler, an Oregon resident who has struggled with seizures for nearly a year, had a brain mass removed, and is awaiting a new diagnosis of her condition after an original one was ruled out.

The game is held every year at the Wahtonka football field in The Dalles. The event begins Saturday, Sept. 23, at 7 p.m. Tax deductible donations to the non-profit Pig Bowl, can be made via the “donate” button on the organization’s web page, or by mailing a check to Pig Bowl, P.O. Box 219, The Dalles, OR, 97058.

While some points are raised on game day, many donations buying points for a team are done ahead of time.

Donors can also attach their Fred Meyer Rewards Card to the Pig Bowl to donate all year around when they shop at Fred Meyer, Holloran said.

The Washington team’s major donors include Crestline Construction in The Dalles and Mid-Columbia Producers. In the pre-point game, as of Monday, Sept. 11, Oregon is leading 702 to 245.

Donations are coming in daily and a full list of donors is available at pigbowl.net.

Holloran said he started Pig Bowl as a way to raise funds for a friend who needed a bone marrow transplant. “Since then, it has grown into so much more,” he said.

“I really believe that God calls us to serve others. In fact, this morning I was reading a devotional about Jesus being a servant and washing disciples’ feet. He clearly demonstrated that service is an action and that love is an action,” he said.

“The Pig Bowl allows us to serve our community and as law enforcement officers that why a lot of us sign up to do the job, to help people and to serve the community and this is a tangible way of doing that.”

The game of eight-man flag football is competitive, but the goal is for “everybody to be able to go to work on Monday,” Holloran said.

Noah Messenger wrote an account of his ordeal on the Pig Bowl webpage. He described getting off work at Maryhill Winery and deciding to explore an orchard. He slipped and fell 60 feet down a cliff. He fully remembered the fall, and knew it would be bad.

But he had told his carpool buddies where he would be waiting to be picked up, so he figured help would come for him. He called and yelled, but nobody came, and he spent a cold night alone. When his legs went numb, he attributed it to cold.

Certain help would come the next morning, he continued to wait. Finally, he realized his only chance for survival was to crawl down the rest of the cliff and hope a train would spot him.

“I spent two nights in the cold and rain with no food or water crawling with a broken back. More than once I would pass out, only to be awoken by the train, knowing I had to keep crawling,” he wrote.

“Thirty-six hours later I was miraculously found by a gardener who was mowing a vineyard,” he wrote. “so many times in that 36 hours I wondered if I would survive, knowing that if I didn’t my family would never understand what happened to me and how devastated they would be. I never gave up because I love my family and I love life.”

He is one of 10 children and he grew up in a very active family that enjoyed a host of outdoor activities. When he was found he had hyperthermia and was in kidney failure. “My body was shutting down and I would not have lived much longer,” he wrote. He was flown to Seattle, where a medical staff member said it was “supernatural” that he was still alive.

Paralyzed from the waist down, Messenger has not given up hope of walking again. His siblings are getting their house ready to sell because it can’t accommodate his wheelchair.

“Pain is now an everyday, unavoidable part of my life. Things that were once simple tasks are now major challenges,” he wrote. “It’s an emotional journey as well as a physical journey.”

He said “being a paraplegic is expensive. With wheelchair ramps, medical supplies, physical therapy appointments, doctor appointments, house alterations and pain management being our initial focus, we are realizing now that a wheelchair friendly vehicle would be a huge blessing and step toward regaining independence because I cannot transfer myself into most vehicles.”

He said it has been an “abrupt and severe change” and he’s taking it day by day. He’s trying to do everything “I can now to stay healthy and help my body heal. I am so happy to be alive and it’s been so amazing to see and hear about all the support. Thank you to everyone who prays for my family and for me. We know God has a plan and we know his plans are best so we continue to trust him.”

Another recipient of the 2017 Pig Bowl is 4-year-old Amelia Hutchinson of The Dalles, who was diagnosed in late June with Burkitts lymphoma, a very aggressive, very rare form of non-Hodgkin’s Lymphoma. But it was fortunately also very treatable, and hers had been caught in Stage 1.

Her mom first noticed a quarter-sized lump in a lymph node in April after Amelia had a slight cough. Trying not to be over-reactive, she waited three weeks to see if it would subside, but it grew, “And I knew something was not right.”

The pediatrician agreed, and sent Amelia to Portland for testing.

In Portland, the oncologists “said she looks way too healthy to be a cancer patient.” But the lump continued to grow, and tests showed it was solid, not drainable. Blood work didn’t reveal cancer, and a host of other tests were done to rule out other problems. By then, the lump was two inches and very prominent.

It was decided to remove it. The surgeon doubted it was cancer because it came out cleanly. But the dreaded call came on June 29. They learned it was a lymphoma, and within an hour, they were headed to Portland to check for more masses.

“They were concerned she had a mass on her spine and abdomen due to some symptoms she was having.

“Luckily, after a very long day, the CAT scan showed no other masses, which is a miracle with this type of cancer,” she wrote.

The following week, more invasive tests requiring sedation confirmed it was Stage 1. Then she had to have another lump removed, her third procedure in three weeks.

Amelia was told about the treatment she’d have, and that she would lose her hair. “We thought this would be awful for her. After a few tears, she decided she wanted to shave her head.”

So the weekend before chemo, she went to Clutch Hair Co. in Hood River, which cut 12 people’s hair in support for Amelia and even let her help.

She did so well in her first round of chemo, expected to be a seven-day hospital stay, that she was sent home after five days.

“After two hard weeks dealing with sores in her mouth, severe stomach and leg pain, and being neutropenic [low white blood cell count], she perked back up and we started round 2,” she wrote.

That was completed, and a post-chemo scan revealed she was cancer-free. After two years of clear scans, she will be considered cured.

“This has been my worst nightmare come true, but even though we feel like we are stuck in a whirlwind, we have seen God with us every step of the way and such an outpouring of love form this beautiful community,” Hutchinson wrote.

“I do not think we could have done this without all of you. Amelia has shown that she is one of the toughest, most resilient little girls I have ever met, and we are so blessed to cal her ours.“We truly believe God will do amazing things in her life.”

The third family, the Bichlers, also from The Dalles, have had two family members facing medical crises. First, father Shawn was diagnosed with testicular cancer in early 2016, and after surgery, he has been in the clear so far in follow-up testing and blood work.

But in October of that same year, his daughter Skylynn, now 7, started having tongue and facial twitching, and then went unresponsive a few days after that. She was diagnosed with tuberous sclerosis, which caused seizures, and medication helped control it initially.

By November, the symptoms were back and worse than ever, with her having 10-plus episodes daily. After a week-long hospital stay in early December, and a battery of tests, doctors found she had a heart condition called dilated cardiomyopathy and also an abnormal brain growth, which was causing her seizures.

The growth was removed in an eight-hour surgery in January 2017. She developed weakness on her left side, and in March began physical therapy. But after only three sessions, she was no longer “eligible” because she showed progress, even though she couldn’t write or throw a ball with her left hand at the time.

With therapy no longer an option, her parents Heather and Shawn had to take it upon themselves to help their daughter’s physical needs.

She was progressing better than expected until mid-April, when her seizures returned. Her left arm and leg grew weaker, and her leg started giving out on her at times. Toward the end of May, she had twitching in her left arm and leg, making it difficult for her to walk.

At that time, the initial diagnosis of tuberous sclerosis was ruled out and more tests were planned.

In late July, she had an MRI and lumbar puncture, which found some spinal fluid results were suggestive of inflammation, but others were not. Her neurologist says she will most likely have to have another brain surgery, and a followup appointment is set for mid-November.

Skylynn is unable to walk much or do normal activities and she is being homeschooled this year for first grade because of all the medical issues she is enduring. She missed most of school last year due to seizures, surgery and recovery, her mom said.

Sorry, there are no recent results for popular articles.