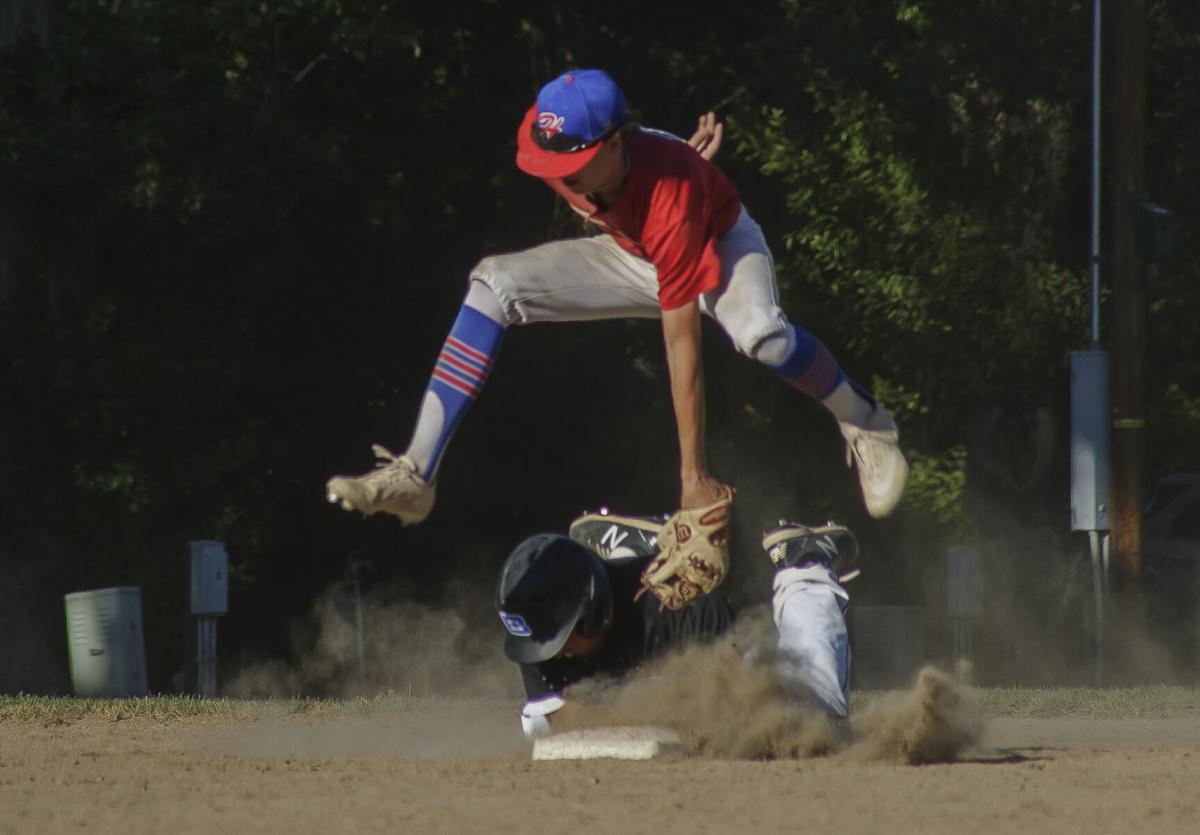 Austin Green tries for a tag on a throw from pitcher Trenton Schacher. 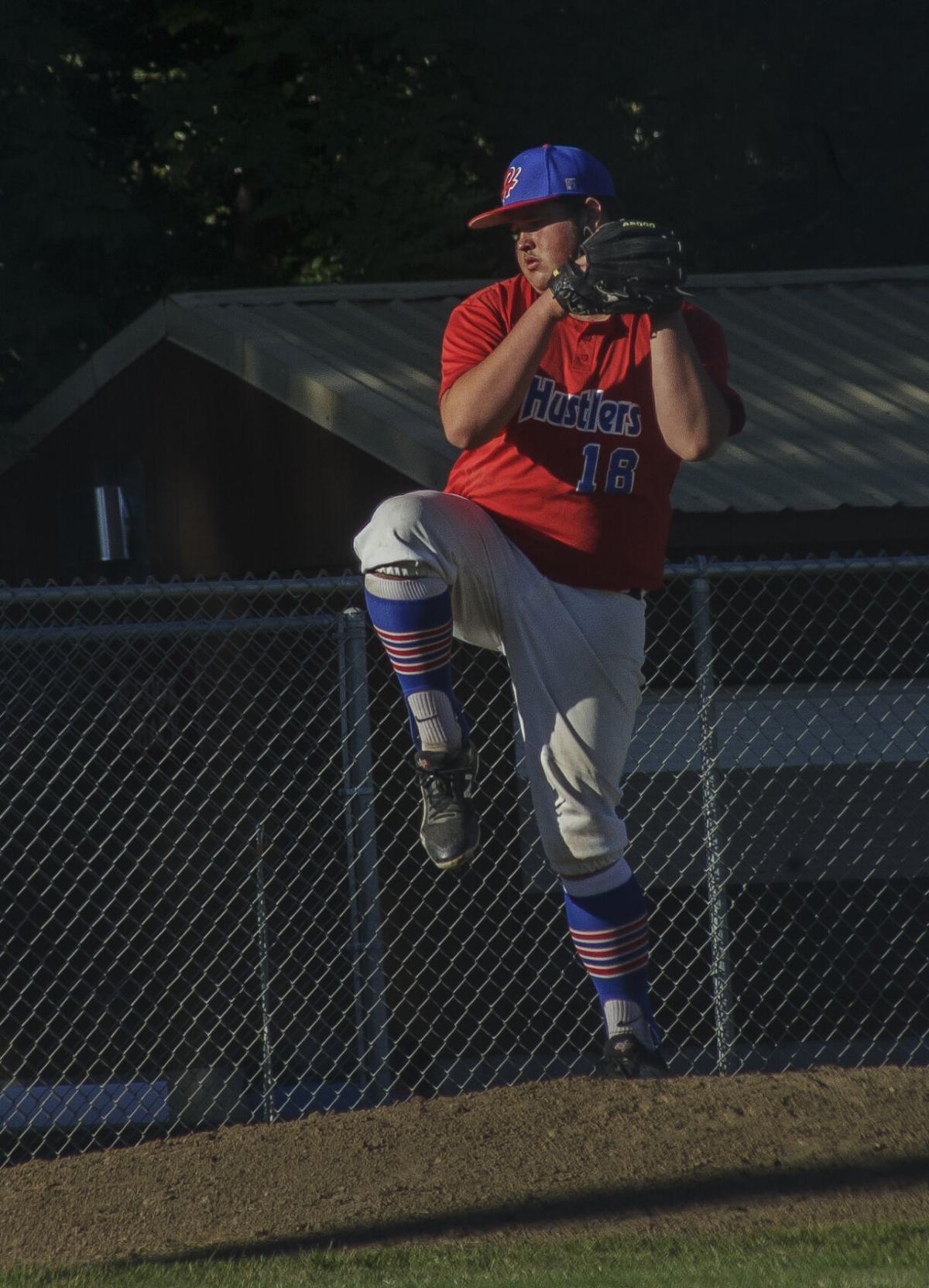 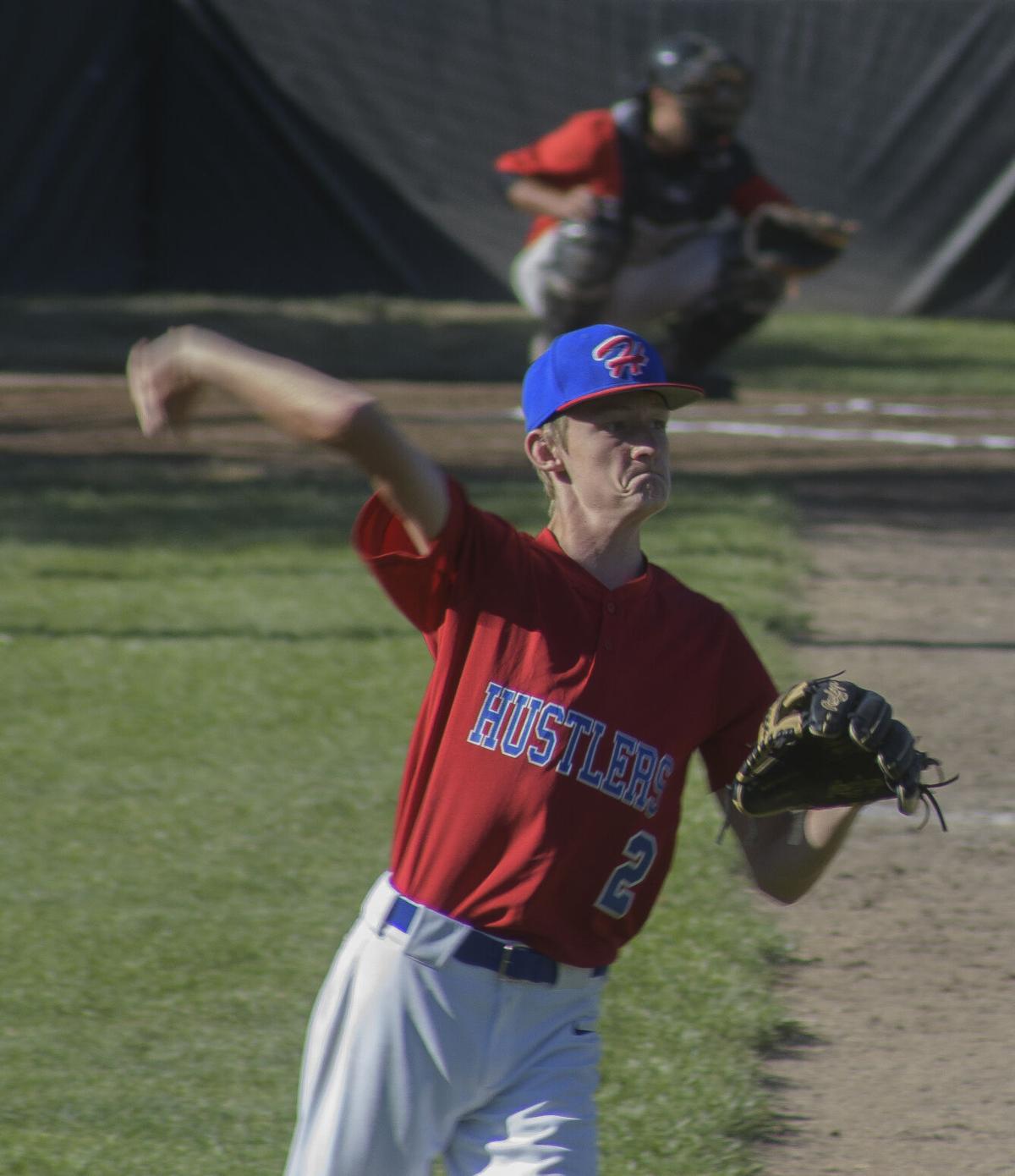 Austin Green tries for a tag on a throw from pitcher Trenton Schacher.

It was mission accomplished for the Columbia Gorge Hustler baseball team in at least two regards the past week. The Hustlers racked up plenty of plate appearances and innings pitched, as they played eight games in five days, culminating with a four-game weekend round-robin series vs. Baker and Eugene at Dufur City Park.

The schedule will show a zero and eight record, but the fine print reveals numerous positives that should become more apparent in the future, as the baseball baptism continues for the Hustlers.

Head Coach Steve Sugg said last week one goal for the young Hustler team was to find the best competition available this summer. Bend, Eugene, Pendleton and Baker provided that, and more. Bend, for example, has four players who were on college rosters this past spring, albeit their seasons were cut short like their high school counterparts because of the COVID-19 pandemic. Eight other Bend players graduated from Central Oregon high schools in June. In all, the Bend roster includes players from eight different high schools. And Eugene? Well, Eugene beat Bend last week.

“Eugene is really good,” Sugg said. “That’s the only way you learn,” is to play the best teams. “We kind of ran out of pitching this week. We threw four young kids in one game; they got a lot of good work in.”

Baker beat the Hustlers 16-8 on Sunday morning and a few hours later, Eugene won 16-1 against the host team in the sweltering 100-degree afternoon heat.

The Hustlers out-hit Baker but left too many runners on base, while Eugene simply overpowered the Hustlers. “They hit three home runs to the short fence in right,” Sugg said. “They had some pretty good left-handed hitters.”

The same three teams played a round-robin format on Saturday. Ten Hustler hits were not enough against Baker, which countered with 13 in an 11-3 win. Baker also took advantage of six Hustler errors. Leadoff hitter Jaxon Pullen was 3-for-4 to lead the Hustler offense, while Fields and Smith contributed two hits apiece.

The Hustlers also played back-to-back doubleheaders Wednesday at Pendleton and Thursday against Bend in Dufur. The Hustlers struck first against Bend in game one. Schwartz singled and scored two batters later on a passed ball. Bend took the lead for good in the top of the third inning and broke the game open with a six-run fourth. Anthony and Smith had the only two other Hustler hits, both singles.

The Hustlers also held the lead momentarily in the second game via a four-run third inning. Number nine hitter Diego Gonzales reached on a throwing error and the top of the order of Pullen, Schanno and Schwartz follow with successive hits; Pullen’s was a double to right-center. All players scored and the 4-3 Hustler lead held up until Bend struck for two runs in the fifth inning and six more in the sixth.

The Hustlers hosted Bend less than 24 hours after dropping two games at Pendleton, 9-2 and 3-2, on Wednesday. The nightcap was highlighted by a complete game from Schwartz, a 14-year-old The Dalles sophomore-to-be. He shut out Pendleton through five innings before the home team rallied to win in the bottom of the seventh.

“We probably should have won that game,” Sugg said. “We led 2-1 going into the last inning.”

The Hustlers dropped both games of a doubleheader July 17 at La Grande, 9-3 and 9-2.

They get a rematch Wednesday at Dufur, with the doubleheader starting at 3 p.m.

On Thursday, the Hustlers host the Portland Lumberjacks (also a 3 p.m. start) and travel to play at Hermiston on Saturday.