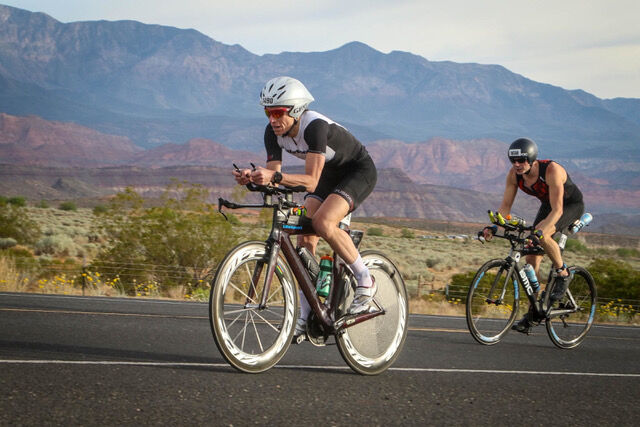 Juliet Thompson Hochman’s Olympic background could be X-factor in winning another World Championship. Above, Hochman, left, cruises right along in the 70.3 St. George in May. She won her age group in this race and qualified for the World Championships on the same course.Contributed photo 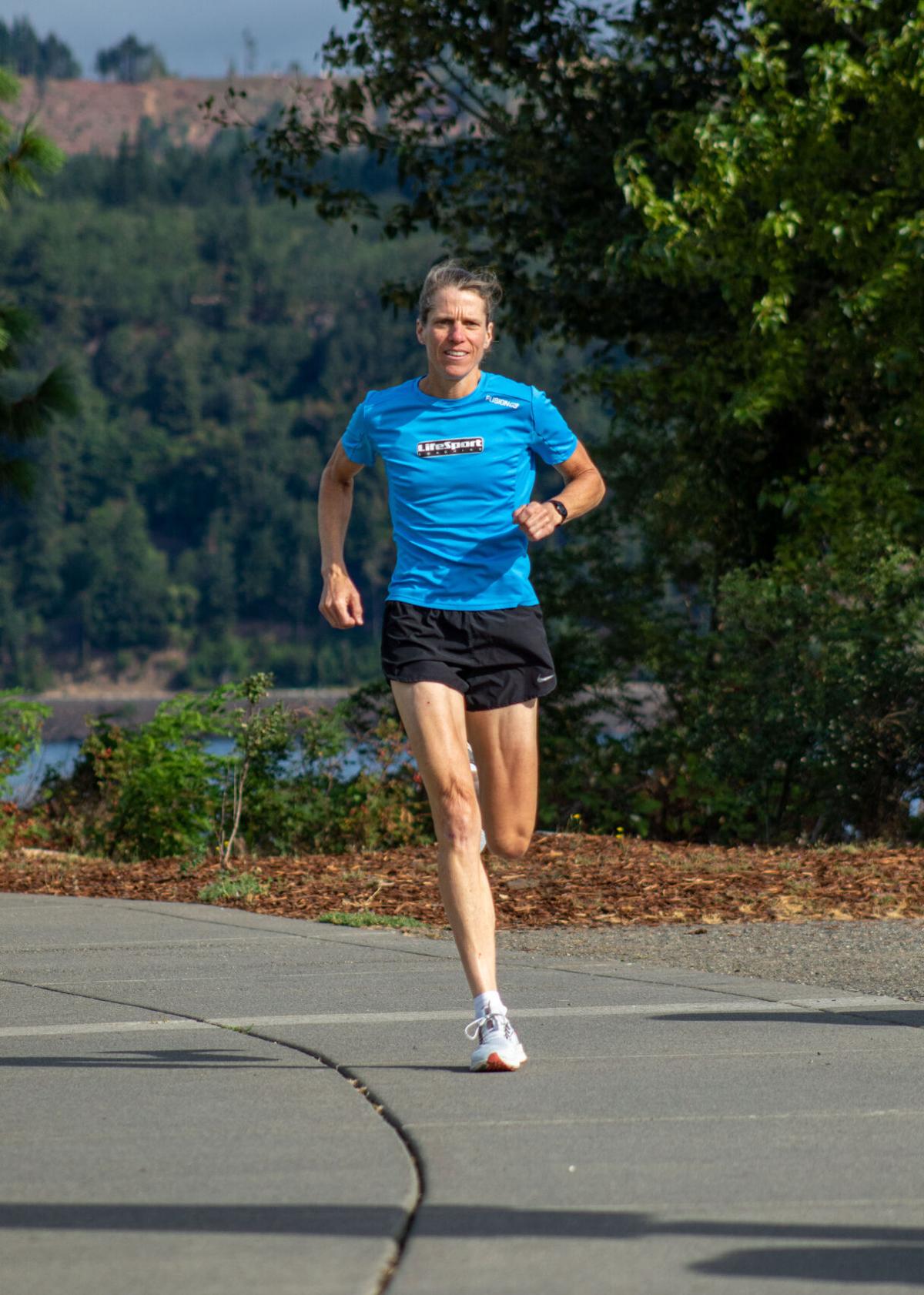 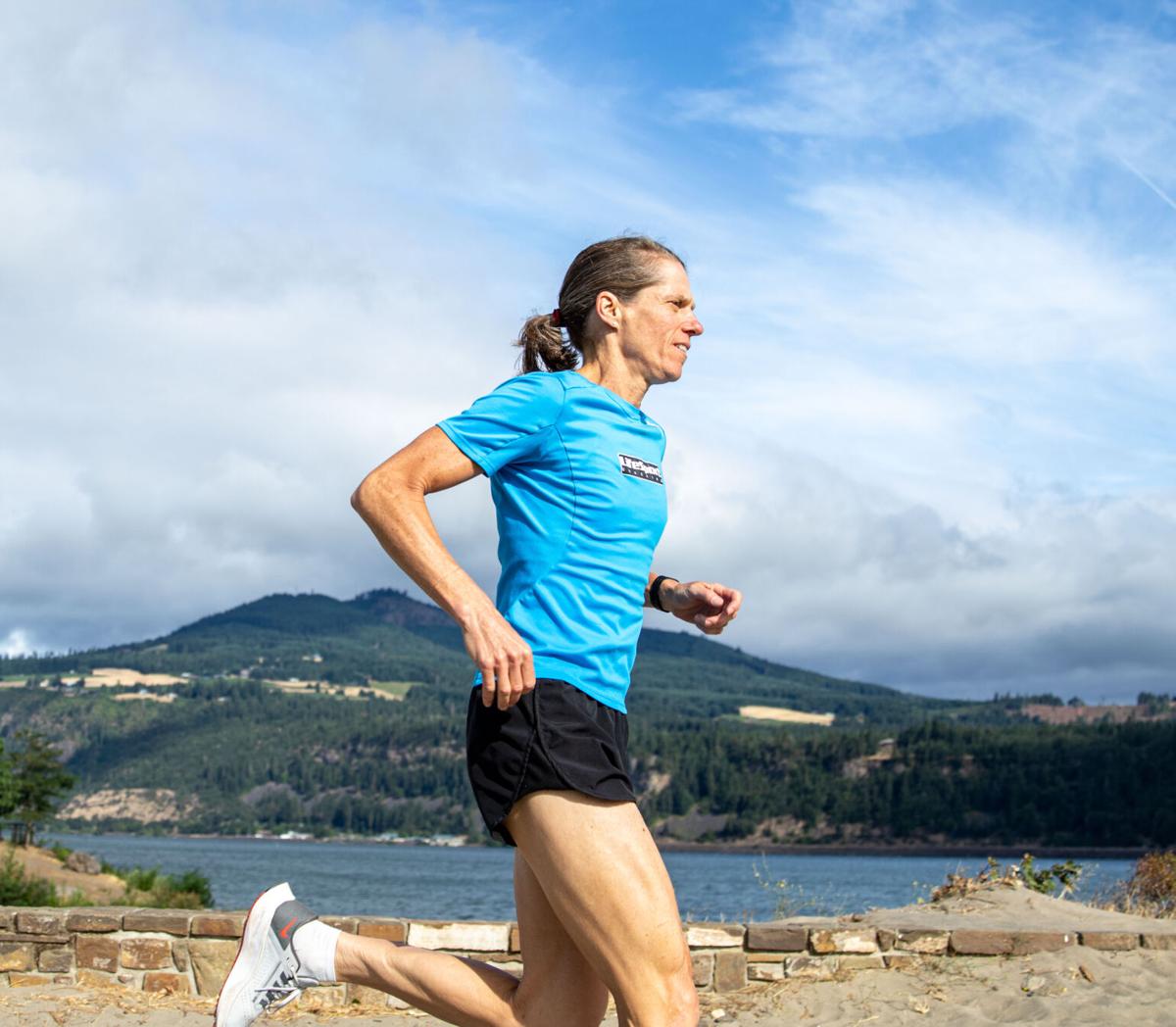 Juliet Thompson Hochman’s Olympic background could be X-factor in winning another World Championship. Above, Hochman, left, cruises right along in the 70.3 St. George in May. She won her age group in this race and qualified for the World Championships on the same course.Contributed photo

Hochman’s college-preparatory school had a very brief rowing season, partly because of the pro- longed time it takes the northeast- ern ice to thaw. All competitions were scheduled in the two month spring season. As a junior in high school, those two months were enough for her to be selected for the 1984 U.S. Junior National Rowing Team that competed in Sweden. That same year, she stumbled upon her inspiration. While on vacation with her family in Maine, she watched the United States women’s rowing team upset Romania to win the gold medal at the 1984 Los Angeles Olympics. In that moment she and her father shared a look. Nothing was said, yet both knew exactly what she wanted to do.

“I still get choked up thinking about it,” said Hochman.

Shortly after competing for the Junior National Team, she was accepted to Harvard and joined Radcliffe Crew, the women’s rowing team for the university. Many women on the U.S. squad trained out of the Harvard boathouse in the morning, so Hochman had a unique opportunity to work with Team USA in the morning and the Harvard team in the afternoon. Countless workouts, national team tests and races later, she was invited to join the 1987 National Team that rowed at the World Championships in Copenhagen and — the next year — the 1988 Olympics in Seoul, Korea. After the Olympics she returned for a championship collegiate season and her final year at Harvard.

After graduating from Harvard, she opted to leave rowing behind. Weary with sitting in a boat going backwards, she looked for new adventures. In 1991, she founded a nonprofit called SCORE, which focuses on community development through sport and recreation in South Africa.

“We worked with local teachers to teach them how to teach P.E. and other sports,” said Hochman.

To follow Harvard, she applied to the Stanford Graduate School of Business. She earned her MBA (Masters of Business Administration) and met her husband Steve.

Olympic athlete? Check. Harvard? Check. Stanford? Check. Juliet’s achievements were piling up, fueled by her work ethic and drive. As her husband’s career took off, she was in and out of the workforce, raising children and running Hochman family operations. In 2014, after two years living in the Netherlands where she rowed with a Dutch rowing club called Willem III, Hochman returned to Portland.

“Rowing in the Netherlands reminded me how much I loved training and racing. I knew I wanted to continue that when I came home to the US. So I jumped into a local triathlon my first week back and did pretty well,” said Hochman.

Her first year back in the Pacific Northwest she wrangled her teenage sons, played tennis and raced in a few triathlons. In 2016 she competed at the USAT Triathlon and Duathlon National Championships.

Triathlons are swim-bike-run events organized into different distances, ranging from a Sprint (750m swim-20K bike-5K run) to Olympic to 70.3 (half Ironman) to Ironman. Hochman started with shorter races, winning the National and World Championships for her age group in 2017 when she was also named Master’s Duathlete of the Year. The next year, to challenge herself yet again, she decided to make the jump to the Half Ironman (70.3) distance in Victoria, Canada. In a 70.3, athletes race a 1.2 mile swim followed by a 56-mile bike ride ­— Juliet’s favorite of the three disciplines — and then a 13.1 mile run. She won first place for her age group in Victoria, and did it again two months later at the 70.3 in Whistler, Canada.

This unbelievable stretch of competitions was followed up by a year that would truly test her perseverance. In 2019 she was sidelined by a hip injury and then diagnosed with cancer. Coming back from cancer she injured her Achilles which put her out of running for a year. The bad news refused to go away when she and her husband were both laid off, their house was burgled and they were called on to support members of their family who were struggling. Then COVID swept across the county, canceling races and threatening her livelihood as a full-time triathlon coach. But Hochman pivoted, digging in with typical innovation and perseverance in both her own training and in building her business.

“During a global pandemic, if there was one thing people could rely on, it was getting a workout in every day. With so much uncertainty and lack of control, heading out for a run might be the only sure thing that offers structure to your day,” said Hochman.

Hochman describes the last 18 months as being “crazy busy” both on the training and professional front as a coach at LifeSport Coaching. She will sustain that pace as she enters a busy fall season with the Ironman 70.3 World Championships in St. George, Utah and the ITU Sprint World Championships in Bermuda. Hochman’s 2021 has been going well; she won her age group at both 70.3 St. George in May and 70.3 Oregon in Salem last month.

Hochman credits some of her success in triathlon to her early training as a rower, particularly her mental discipline and her work ethic. There are so many elements to successfully racing at the highest level, from nutrition and sleep to physical and mental training to logistics and specific preparation. Hochman embraces all of it.

“I want to stand at the start line and know that I did all I could have done,” said Hochman.

If anyone knows how to stay in the best shape both mentally and physically, Hochman has all the experience needed to compete at the highest possible level. Through trials and training, cancer and injury, raising a family and building a business, Hochman has found her stride.