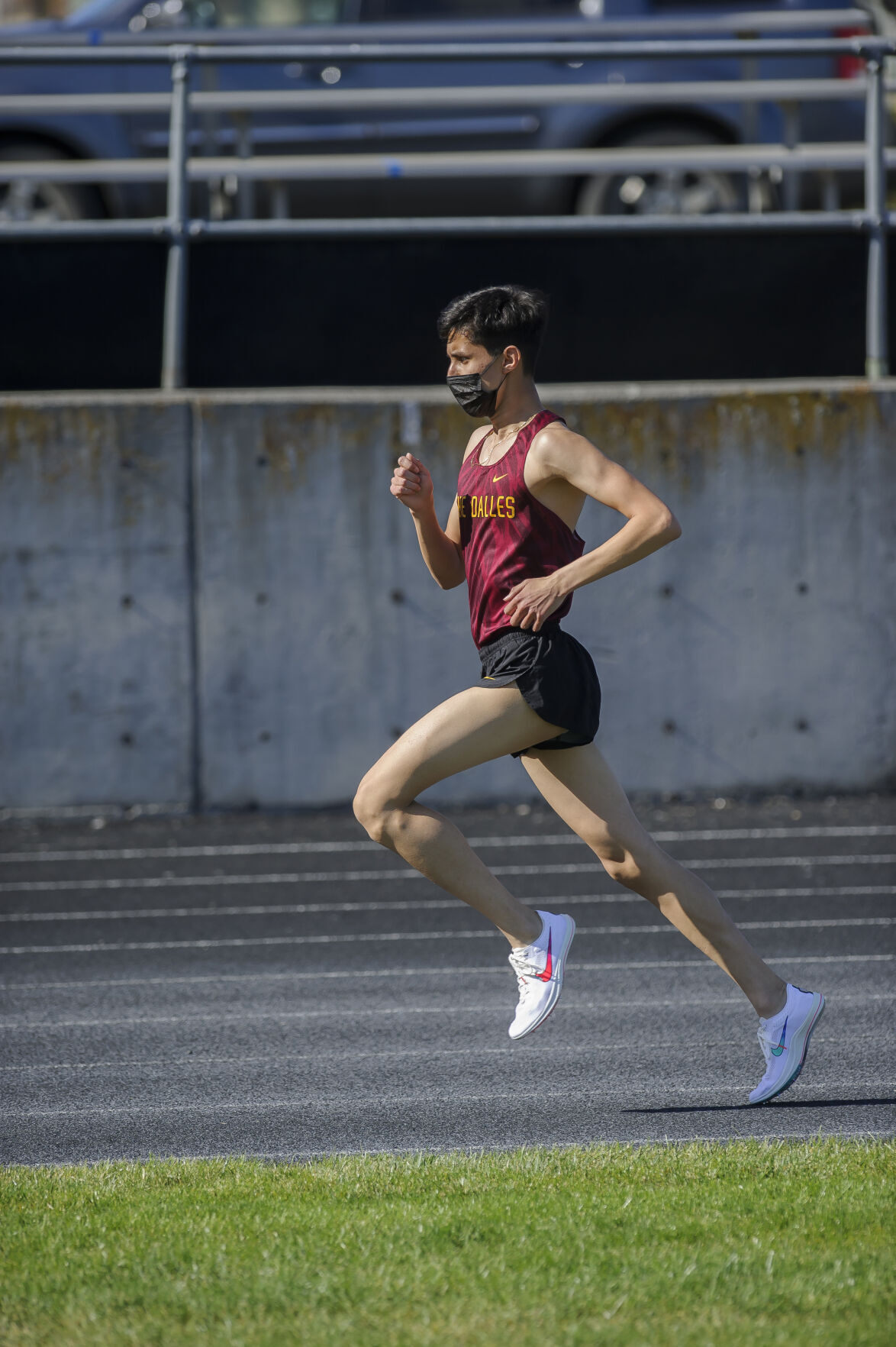 Juan Diego Contreras, a junior at The Dalles High School, is currently the favorite to win this year’s individual title. 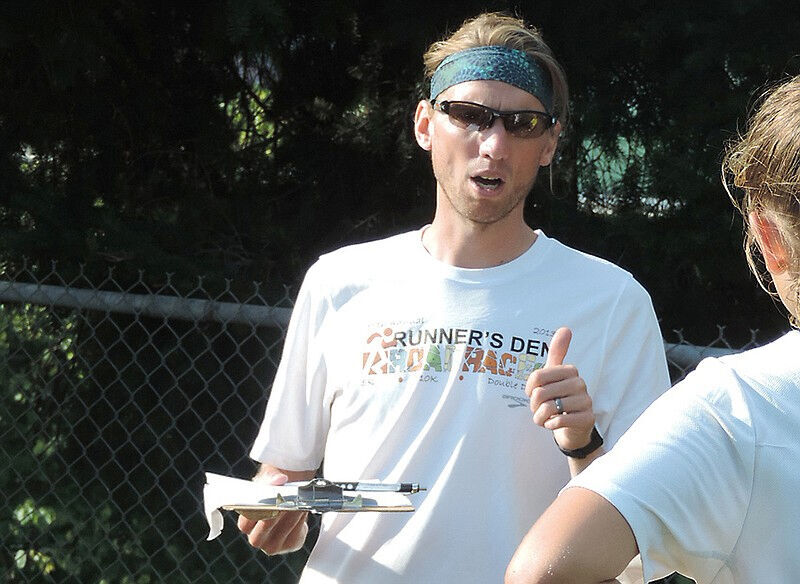 Juan Diego Contreras, a junior at The Dalles High School, is currently the favorite to win this year’s individual title.

Kids do grow up, and nobody probably can attest to that more than elementary and middle school teachers. That said, Brandon Bertram and Jill Pearson are in unique positions to monitor the ongoing running progression of Hood River Valley and The Dalles cross country runners.

“I coached them back in middle school, and it’s cool to watch them grow and see their determination pay off year after year,” Pearson said of a group of returning varsity runners, as well as some newcomers, for the Riverhawks.

Bertram said some of the HRV runners have continued running throughout the years since he introduced them to the sport as a PE teacher, while others are gravitating back. “We’re reaching a lot of the kids that I’ve had since second and third grade,” he said. “It’s impressive how new kids found the program this fall.”

Both teams seem to be benefiting from a surge in numbers, in part because of last academic year’s COVID-interrupted season, and both teams are boosted by successful summer running programs.

“Thanks in part to the oddness of pandemic athletics, we have a lot of brand new sophomore and freshmen runners who are trying out cross country for the first time,” Pearson said. “We had a consistent crew of about 15 runners who made it to our (summer) evening runs, plus a couple more who ran on their own due to jobs or other schedule conflicts. It takes about two weeks to get in shape, so those who ran over the summer are at a definite advantage right now. During the summer the middle schoolers ran with us, so it was fun to see that camaraderie develop, too.”

Bertram echoed that sentiment. “Our numbers will be about 35 to 40. It’s a young group; we’ve got a lot of freshmen and sophomores and first timers coming through. They had a good summer; they really got together on their own and worked.”

For HRV, that offseason work has helped pave the way to district championship expectations every season, including the past three in the Intermountain Conference. “In our program, going into a season, our expectation is that we will be competing for a conference championship,” Bertram said. “We want to be the best in our conference each year. “And it’s super fun to have a rivalry with The Dalles, going back and forth, year after year.”

Hood River Valley swept the team races for the third time in five years at the “2020” Intermountain Conference district cross country meet at Sorosis Park in The Dalles. (COVID postponed the season until the spring.) The HRV girls raced with a pack mentality to a 28-point margin, 25-53, over runner-up The Dalles. The young Eagle boys team received strong performances throughout its lineup – including its Nos. 6 and 7 runners - to defeat the host Riverhawks, 36-48, who had won the boys crown in 2019.

HRV has won five successive district girls team championships, with The Dalles finishing second the past three races. The Riverhawks were the last league team to defeat HRV girls at district, and that came in 2015.

Both the boys and girls individual district champions graduated: HRV’s Chloe Bullock dominated the girls race, winning by more than a minute; Crook County’s Alex Carne had a slightly tougher time, steadily pulling away from The Dalles’ Juan Diego Contreras for a seven-second victory. Contreras, a junior, is the favorite to win this year’s individual title. Junior Elliott Hawley finished third at district and is the top returning boys runner for HRV. Ridgeview senior Finn Anspach was fourth and also should be in the conversation about the individual championship.

On the girls side, Eagle junior Phoebe Wood was third at district and was the lone non-senior among the top five. Senior teammates Mieka McKnight and Sophie Kaden were sixth and seventh; those three runners are the top three district meet returnees.

Pearson, in her first year as head coach, will have her long-time coaching cohorts — Mandi Williams and Bob Thouvenel — back with her. Contreras, Leo Lemann, Conor Blair, and Kayden McCavic return to the Riverhawk varsity boys. Lemann was sixth at district, the top placing among frosh; Blair was 20th. On the girls team, Caitie Wring, Caitlin Frakes, and Fiona Dunlop are back. Wring was 11th at district this past spring after finishing 21st as a sophomore; Frakes was 30th a season ago.

“A lot of them ran on their own throughout 2020 and had phenomenal times in the short season last spring,” Pearson said. “I’m super excited to see what they do with a full season. Caitie and Conor, both seniors, have taken great initiative at welcoming all the new runners this last week.”

The newcomers include Egan Ziegenhagen, Andrew Wring, and Alaina Casady, freshmen who ran for Pearson on the middle school level. “They’re some of the mentally toughest kids I’ve met. Make sure you watch the finish line for Egan - he’s got a kick.” Gabriel Castillo is another of the newcomers, who Pearson said will benefit from summer runs. “He’s made it out for just about every summer run,” she said. “I feel like I met a new face at every practice this week — and more to come.”

The Dalles opens its season at the Riverhawk Run, Saturday at Sorosis Park.

Similar to The Dalles, HRV is fortunate to have succession in its coaching staff. “The first thing I do after each season is ask if my coaches are going to come back,” Bertram said of Alisa Logsdon and Steve Noteboom. “It’s a team effort, to be sure.”

The Eagles have some athletic newcomers, including sophomore Simone Tillman, known more as a sprinter/pole vaulter (IMC district 200 meter champion) during her frosh track and field season this past spring. “We have some really athletic kids,” Bertram said.

Hawley, Jackson Bullock and William Bunch lead the Eagle boys. Bullock was seventh at district as a frosh; Bunch finished 10th. Cross country scoring includes a team’s first five finishers, but its No. 6 and 7 runners can add points to opponents’ scores if they finish before the first through fifth runners on those teams. The Dalles had a better 1-2-3 punch a season ago, but HRV’s top seven finished ahead of the Riverhawks’ fourth and fifth runners.

Bertram hesitated to name a few other of the newcomers, noting “let’s just wait until our first few meets and see the results.” He did say the Eagles’ past success tends to carry over each season. “We’re proud of our past and we’ve been shaped by those people who have been a part of that past,” he said.

The Eagles open their season Friday at a night meet in Wilsonville.