Believed to be damaged by a “deluge” early August,  public officials posted the west end of the building as a "dangerous building" and closed the building, sidewalk and one lane of Third Street through downtown The Dalles. 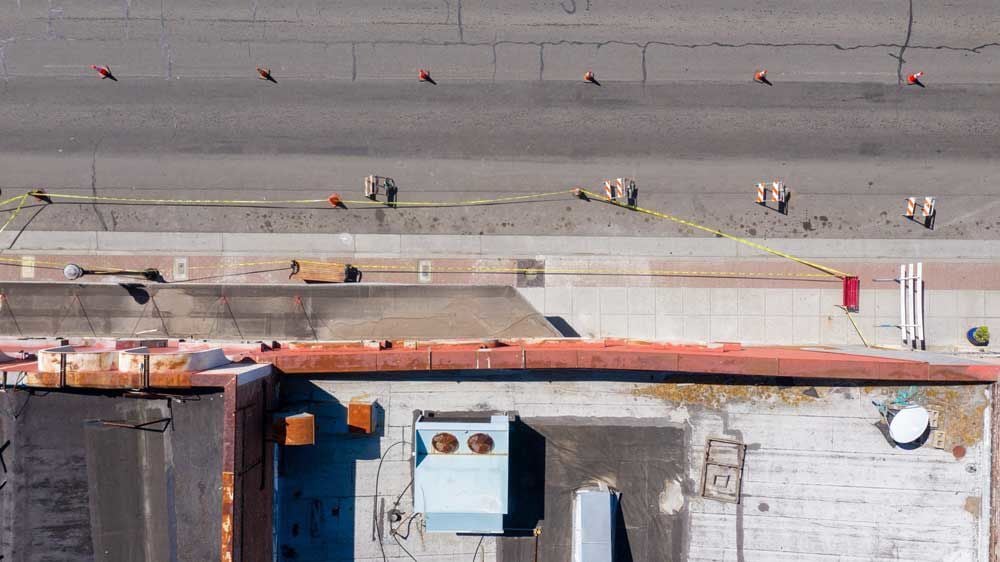 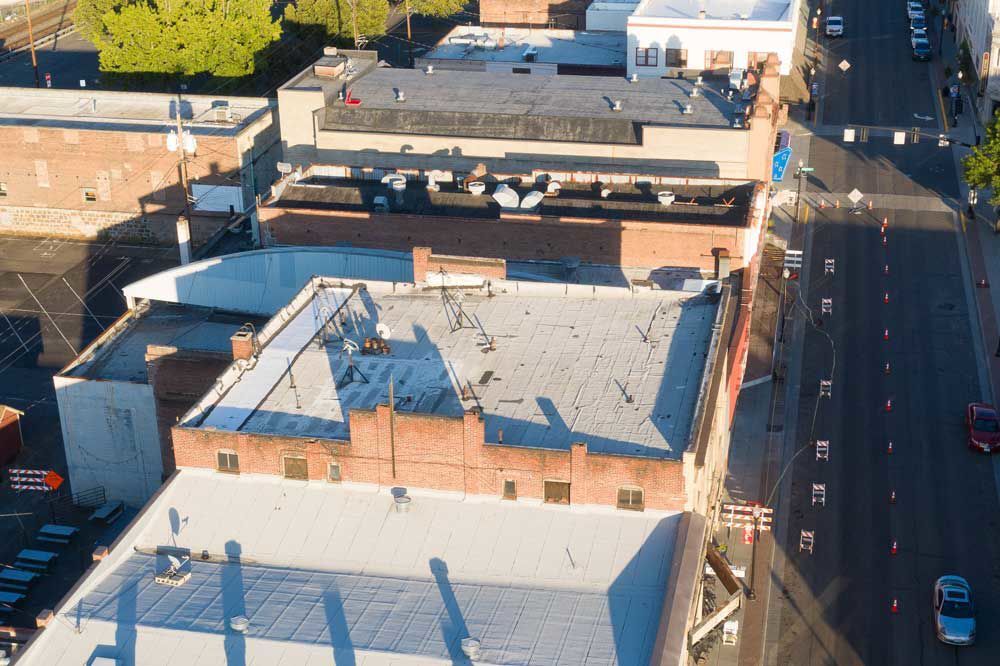 Aerial images taken by Donnie Buckles shows the front wall of the Recreation Building downtown sagging toward the street.

Believed to be damaged by a “deluge” early August,  public officials posted the west end of the building as a "dangerous building" and closed the building, sidewalk and one lane of Third Street through downtown The Dalles.

Aerial images taken by Donnie Buckles shows the front wall of the Recreation Building downtown sagging toward the street.

The sidewalk and one travel lane in front of the Recreation Building downtown on East Second Street were blocked off Saturday night after it was learned the front of the building was sagging and at risk of collapse.

Jersey barriers were to be brought in Monday to make a more substantial barrier, said Steve Harris, director of the city’s community development department.

The adjacent building to the west houses the Last Stop Saloon, and diners there were evacuated at about 6:30 p.m. Saturday, out of caution, but reopened Tuesday morning.

The heavy rains from the previous weekend, Aug. 9-10, when nearly three inches of rain fell in 20 minutes, were suspected of causing the damage. Harris said building owner Todd Carpenter estimated the water weight on the roof was in the thousands of pounds.

Harris said Carpenter, who purchased the Recreation from the city’s urban renewal agency, has been doing work in the building. “What they noticed over the weekend is that evidently the roof started to buckle inside, so they’ve been doing some inspections over the weekend,” Harris said.

Harris met twice with Carpenter Monday morning to discuss the situation with him.

Harris said Carpenter was bringing in a structural engineer to assess the building, and would be making a report to the city’s urban renewal agency board Tuesday.

“More than likely the front of the building will need to come off to relieve that stress,” Harris said.

He said, “over the weekend they’ve done emergency work to shore up the front of the building so it stays where it is, but again, that’s only a temporary measure.”

Harris said, “I’m not a structural engineer, but I don’t believe it’s in danger of collapsing because they have gone in there and done some shoring up, but they do have some definite issues.”

Donnie Buckles, who took drone photos of the building for owner Todd Carpenter, posted the photos to community pages on Facebook and wrote, “the building let out a couple of concerning noises while I was there shooting these pics.”

Buckles said, “Big kudos to Todd for trying to save this building and do something with it again for our community. No matter what he does with it it’s only going to be a better use of that space than what it is currently doing.”

Carpenter commented on Buckles’ post on Facebook and wrote, “One good thing that came out of this we learned that someone had all the engineering and floorplans.”

They believe the structure is not attached to the buildings on either side of it, which would be the Last Stop Saloon to the west and the former Horn Saloon to the east.

The Recreation sign itself is a façade covering three separate buildings behind it.

Carpenter posted that he would meet with “city inspectors/engineers hopefully tomorrow and work out a plan for hopefully a quick and safe resolution.”

TDHS student heading to U of Chicago

Sorry, there are no recent results for popular articles.