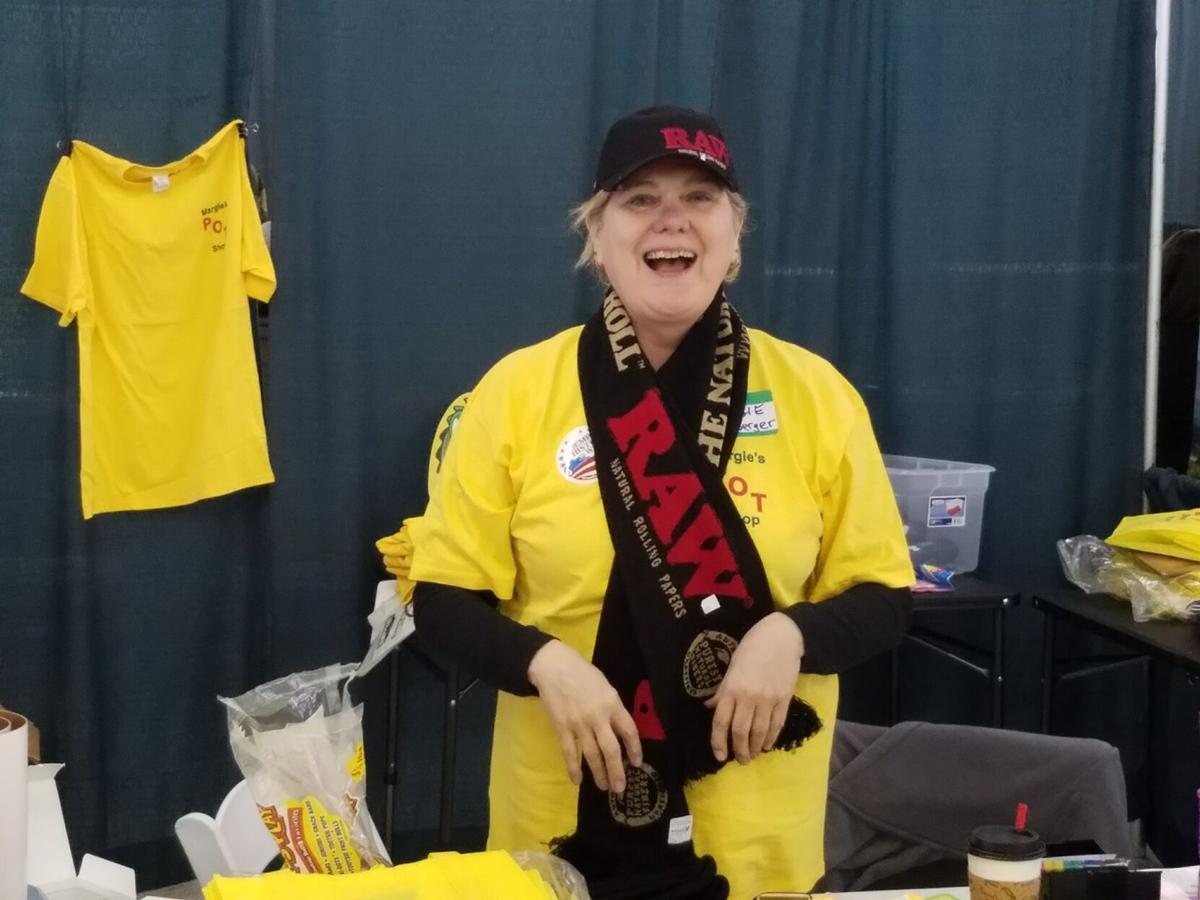 Margie Lemberger dons merchandise at a retailer convention. The owner of Margie's Pot Shop in Bingen, Margie passed away March 3 at her home in town 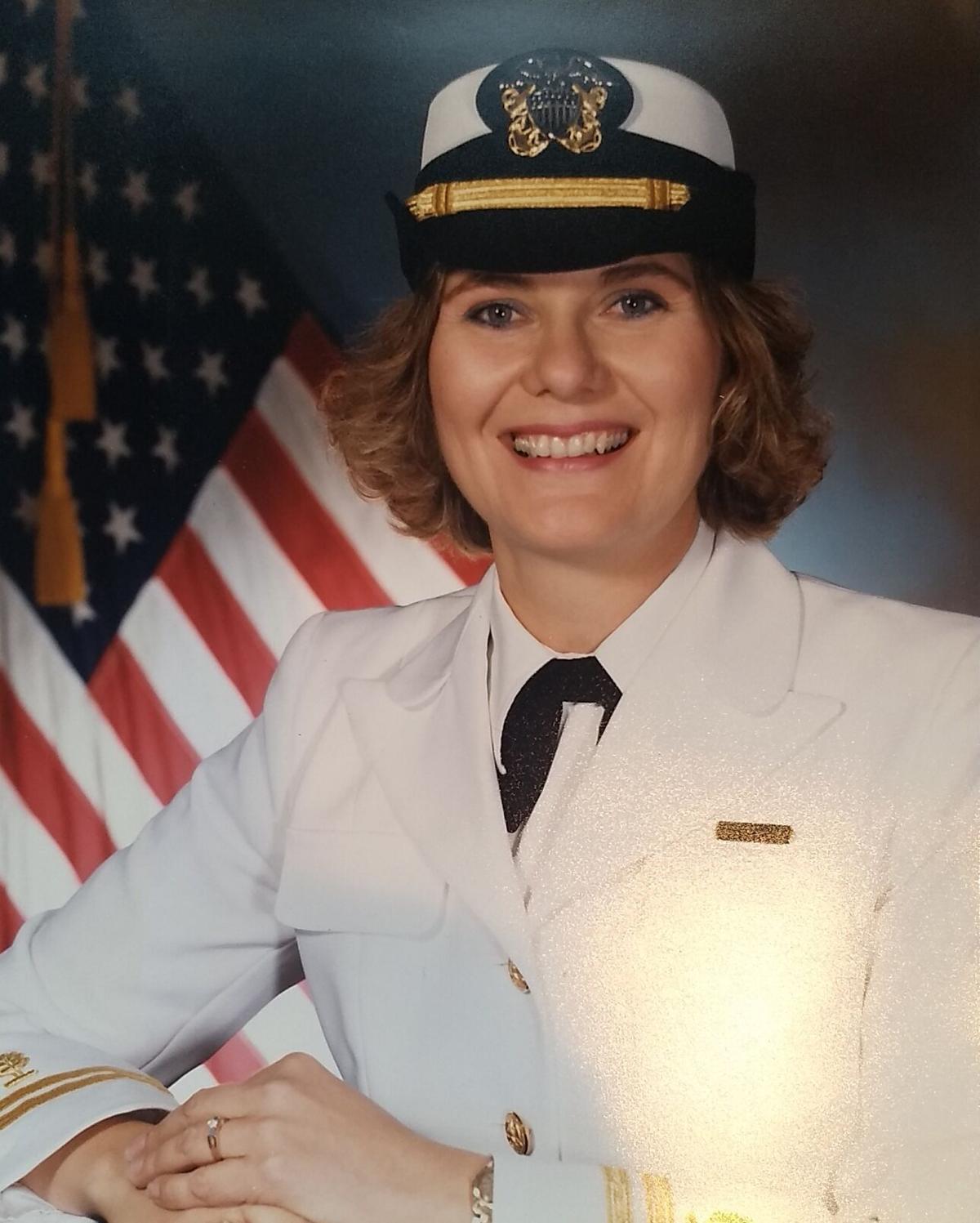 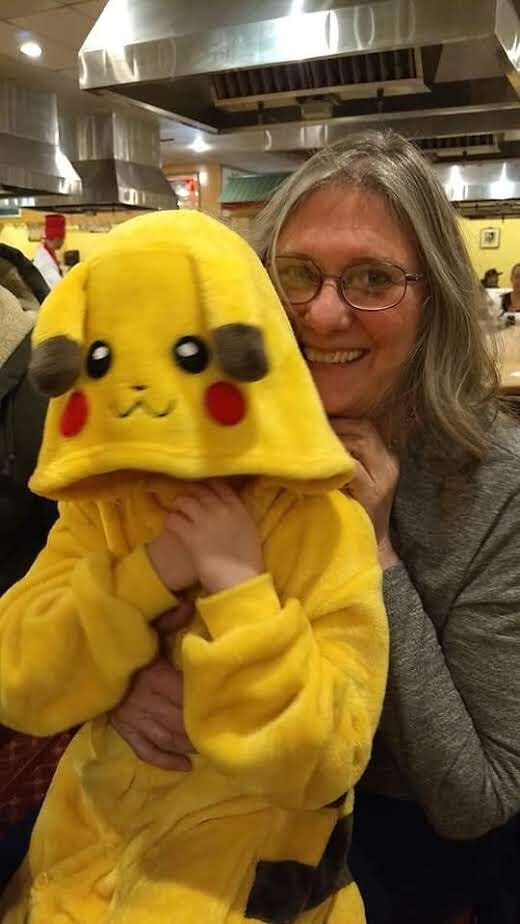 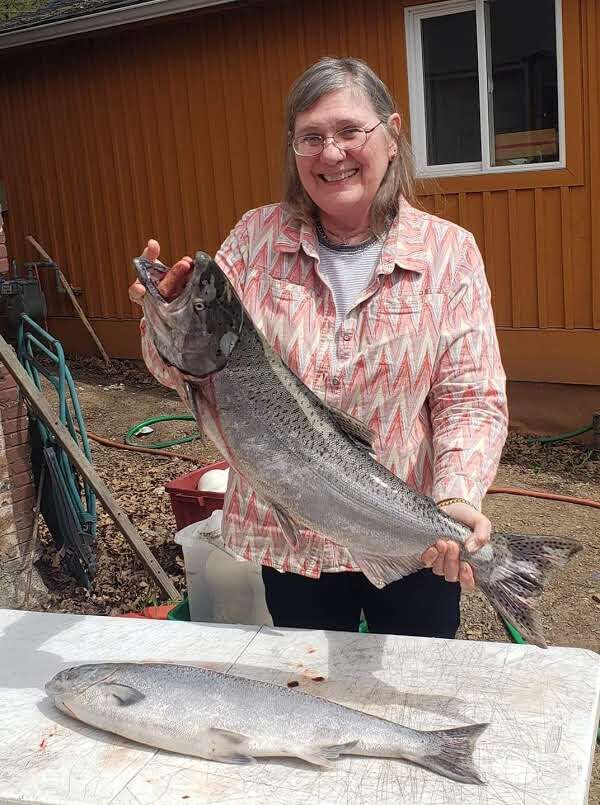 Margie shows off her catch of the day.

Not many people would accept a collection of petrified wood as a down payment on a fifth wheel trailer, but that is just the kind of thing the late entrepreneur Margie Lemberger would do for the people she cared most deeply about.

“It was just a way to help somebody. This was what that they had at the time, it was a thing of value and she didn’t want them to feel like she was giving them a handout,” said James Szubski, Margie’s son-in-law. James explained that the collection had been handed down in the buyer’s family, “and so it was a significant thing for them to part with. And so Margie accepted, and I think she gave a lot of it back in the end.”

Margie especially cared and provided for the employees of the business she opened back in 2014, Margie’s Pot Shop, and it shows through the stories James shared.

“It’s story after story like that. Whenever she could, she helped folks out,” James said.

James has been visiting the Columbia River Gorge from his home in the Seattle area this past week, meeting Margie’s employees and clearing up her estate, following her passing on March 3. After speaking with the handful of employees at Margie’s Pot Shop and hearing the stories about his mother-in-law, James said he walked away with a reinforced sentiment that Margie had a true heart of gold.

“She was a magical woman in many, many ways. And that word, more than any other, describes her,” James said.

James told another story about how an employee of Margie’s had been in a domestic violence situation, “and she gave that women and her children refuge until they could get back on her feet again.”

One time, an employee got into a shady deal over a used car. The employee had bought the car from a private seller. “The guy said, ‘Well you pay me, and I’ll pay the bank,’ and she paid him, and he never paid the bank,” James said.

“Well, Margie got wind of that and she went, and she bought the car, and took care of the whole thing, and then made no-interest payments for this young lady that she dearly loved. And that’s the one story I keep hearing again and again,” said James.

Margie had grown such positive relationships with the people who worked beside her that many of her employees were there at her deathbed around her when she passed, James said, due to cancer at the age of 72.

Even as she was getting sick, James said Margie spent her days building the business, which has thrived in the Bingen location since its opening in 2014. She had been getting plans together to open a second business, Binge Mart, next door.

“For me, I just kept coming back to what a magical thing she created here,” James said.

Margie had grown from humble roots. Born to dairy farmers Nov. 2, 1948, in Los Angeles, California and "right after milking was done," Margie’s mom would often say she was born smiling. She grew up with 10 brothers and sisters and shared a bed with her eight sisters.

Margie married her first husband, Jerry, and from their relationship came two children: Loren and James’ wife, Jill. The blossoming family spent time in the Seattle area while Jerry worked for Boeing. The couple would later divorce, and Margie found work as a pharmacist following her departure from the Navy around the Seattle area, on a reservation in Arizona and later in Yakima.

Margie remarried later and she divorced that person too, James said. According to James, “She really didn’t ever feel like she needed a man; and in fact, most of the men in her life, she took care of them.”

Near the end of the '80s, Margie enlisted in the Navy. As a sailor, Margie received training to become a pharmacist, a profession she would follow for decades up until she opened her recreational marijuana store here in the Gorge. Margie spent five years in the Navy and was honorably discharged in 1994.

James said she was a great pharmacist. “She had a very strong healer streak in her,” said James.

“Many people would come to her and ask her questions, and she’d often be advising doctors and correcting doctors on their prescriptions, because she was very aware of how drugs interact and which ones are more appropriate,” James said.

At Margie’s Pot Shop, there is one specific product that people started calling “Margie’s Medicine,” James said, because it was her favorite, but she knew that it was the most healing, and most calming to folks.

“Whenever she could, she was soothing to people, and she also was magical, in that things that no one thought could happen would happen when Margie was around,” said James. “She was non-judgmental, and accepting of everyone, and willing to offer that helping hand and create these magical moments for folks.”

About the time her children were grown and out of the house, James said, Margie adopted a baby girl who struggled with complications stemming from the mother’s drug use during pregnancy. Krista then became Margie’s third child, whom she took care of and “looked after to her dying day,” James said.

While in Yakima, Margie began making trips down the Gorge to find fishing spots. She loved to fish, James remembered, so much so that she fell in love with the Gorge and its communities. Her love of fishing, as well as the communities’ vicinity to travelers and tourists were two main factors which led her to open Margie’s Pot Shop right here in Bingen.

“Being a pharmacist, she was really keenly aware of the changing marijuana laws, on the medical side and then on the recreational side,” James said. “Once those laws changed and they started opening up to a lot of other folks, because Margie had so much experience working with controlled substances, she was the very first person in Washington state to get a recreational marijuana license.”

“This is a woman who is basically a single mom and she is doing this all on her own. She is navigating this complex, brand new field of all the regulations and everything, and they’re making them up as they go and she’s jumping through every hoop. She’s got a significant amount of money that she put down to make this happen,” James said. “It just boggles my mind the amount of willpower and smarts and savvy, and you know, figuring out how to make things work that no one had ever done before,” James said.

A White Salmon Enterprise article dated July 10, 2014 captured Margie’s feelings the same week her shop opened. Margie was quoted as saying, “I’ve always believed that pot should be legal because I think we waste so much money putting people in jail over pot. It’s just not smart to waste all that money over all these people who get 10 years in jail for smoking or selling pot.”

Margie discussed in the 2014 article what the experience had been like for a new recreational cannabis owner. She said, “I had an older gentleman stop who wanted to buy just one joint because he never tried it before. He was from Chicago and was really excited because it’s going to be legal here. So many people have stopped, but that’s my favorite.”

After nearly seven years of working in the marijuana industry, Margie had come to build up her savings and was able to spend generously on herself and on the people around. James said one of her favorite things was jewelry, because it reminded her of her humble roots and how hard she worked to build a name and a business for herself.

She had all kinds of passions, like playing mobile video games, and she spent a lot of time on the water. Every so often the couple would receive a picture from Margie showing off her freshest catch of the morning.

James called her a healer many times. He said that “in her heart, she really believed marijuana could help people. And both with anxiety issues and pain relief and other things. And as a pharmacist, it is not just like ‘oh this is cool and fun.’ It’s like, no this is legitimate chemistry, and it’s helping people.”

James said charitable donations are welcome in Margie’s name to Washington Gorge Action Programs at www.WAGAP.org/donate. James also requested leaving a tip at Margie’s Pot Shop for the employees who were affected by the sudden loss.

What's Next for Margie’s Pot Shop?

James told Columbia Gorge News that he and Jill are taking over the business, effective last Thursday.

The decision was sudden, much like Margie’s passing, but James said it was the right thing for them to do.

“I feel like I’m coming home in a lot of ways,” said James. Having spent years building a career in marketing, he left the industry and has since wrote a couple books and trained to perform search and rescue activities. When COVID-19 hit, James became a contact tracer. Since then, he said he has not felt the need to return so he is viewing this as an opportunity for him and Jill to start their next adventure.

James said he and Jill also decided to move to the area and become members of the Gorge community. There are many hurdles in the way before they are fully transitioned, but he said he is excited, and honored, to take these next steps.

“It’s really important to me that I am engaged with the others who are running businesses, and with the mayor and the police, and all the folks that a business like this impacts,” James said. “So I really look forward to meeting folks and getting engaged with the community. Margie was a big part of it, and I would never be able to fill her shoes but I certainly want to start taking the first steps.”

“My wife and I understand that a cannabis business run improperly can be a blight on the community, and that is something that we are going to strive to never be,” said James. “We want this to be a place where all walks of life are accepted.”