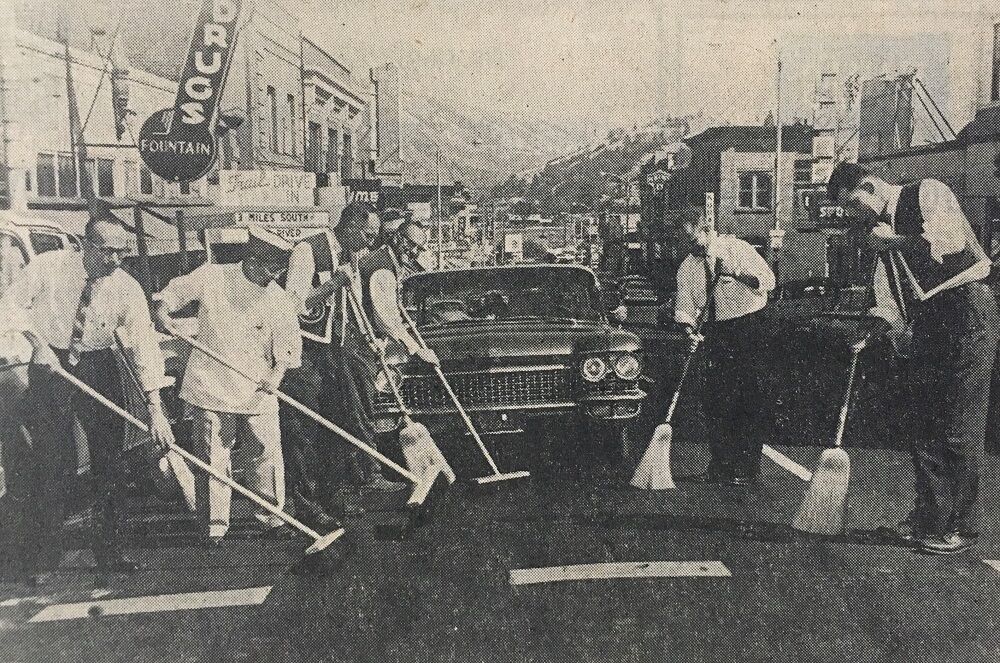 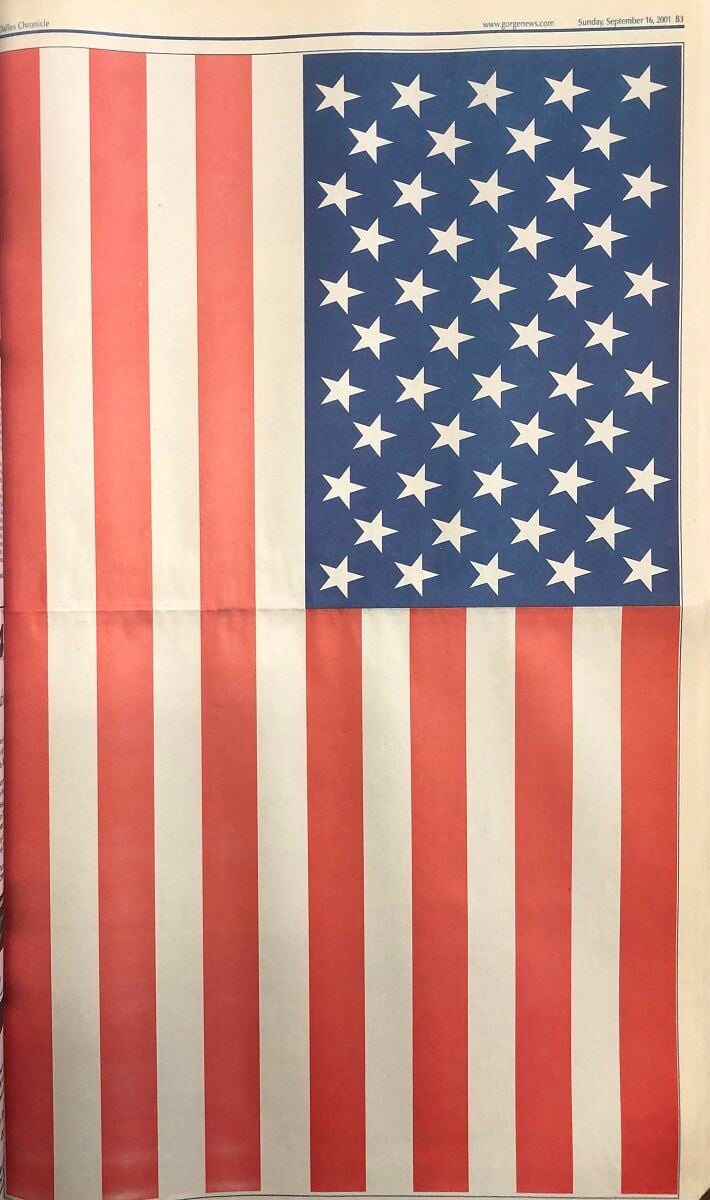 With American flags sold out in the Gorge after the Sept. 11, 2001, terrorist attacks, The Dalles Chronicle newspaper published a full page, full color flag in the Sept. 15 issue. The paper flags could still be found posted in the windows of area homes many years later. 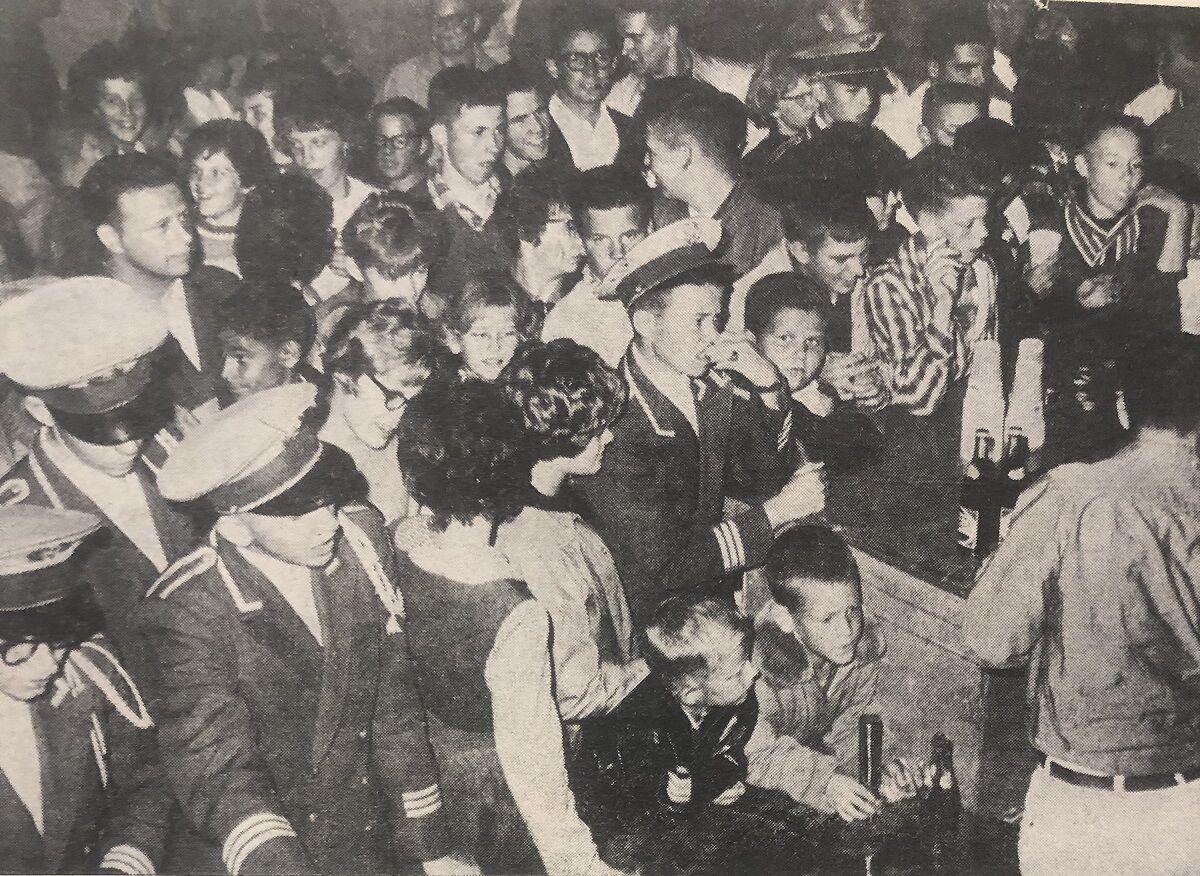 Time Out — Photo taken from inside shop building at east end of Amotan Field shows only part of the jammed mass of hungry people, mostly youngsters, who took advantage of cold drink concession operated by The Dalles FFA at halftime of Friday nights The Dalles-Wy’east football game. 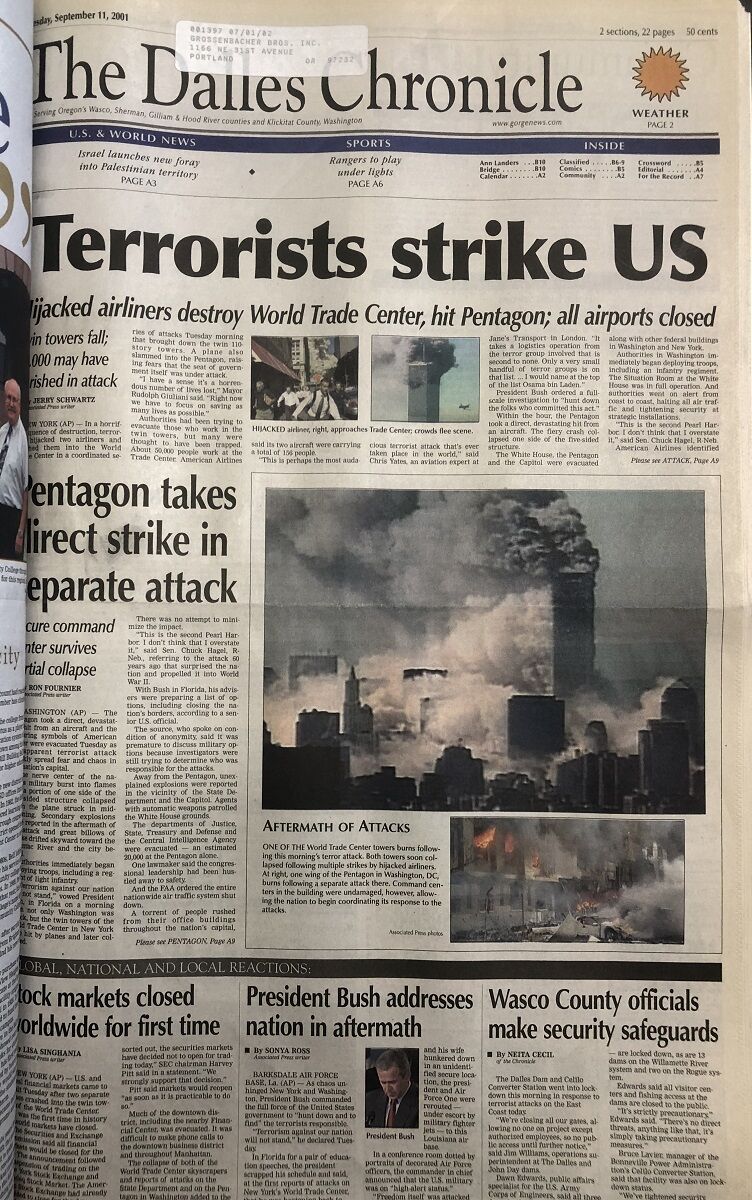 The terrorist attacks of Sept. 11, 2001, are featured on the front page of that days’ The Dalles Chronicle. This year marked the 20th anniversary of the attacks. 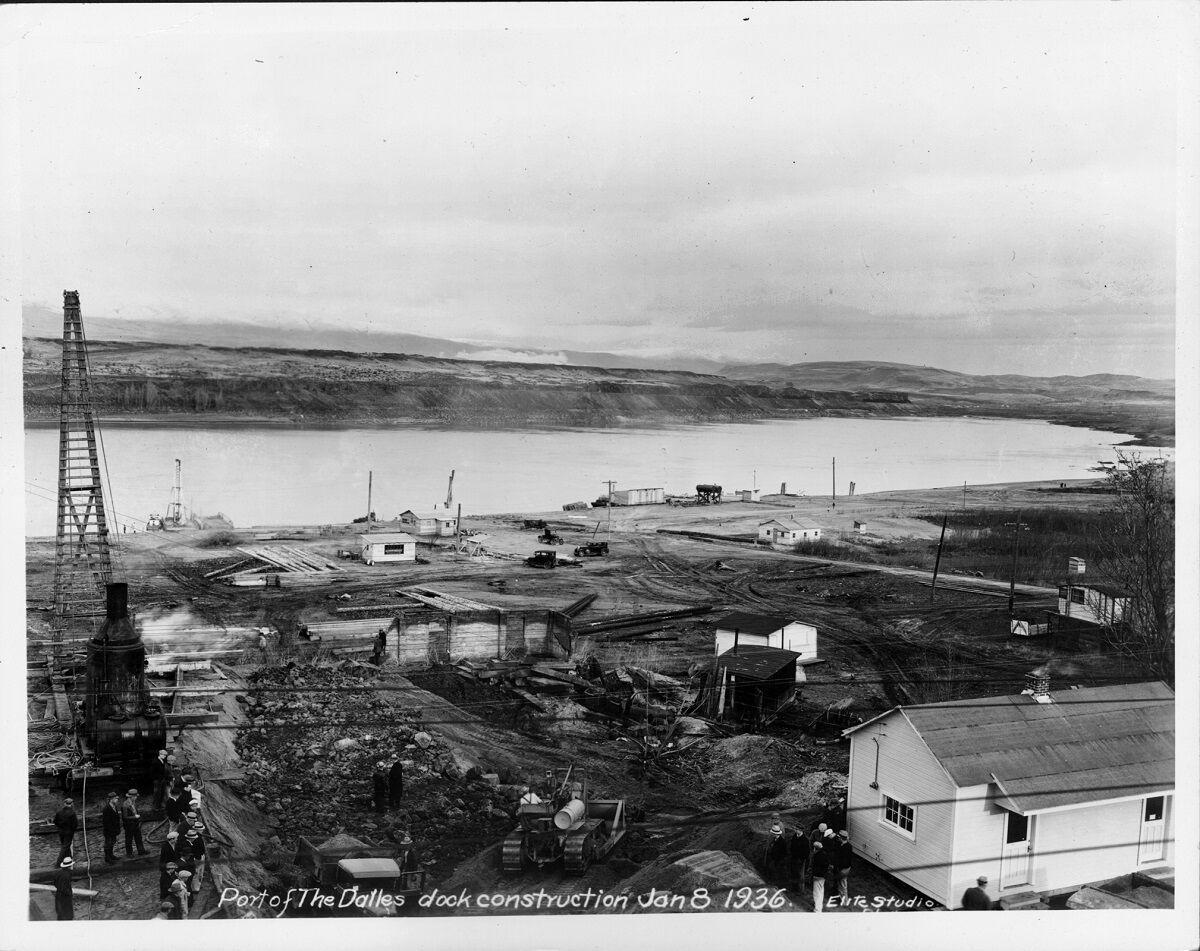 Port of The Dalles: Work is underway for a port dock in this photograph, taken in the vicinity of Union Street in The Dalles in January 1936. The dock was built in anticipation of the completion of the locks and dam at Bonneville, already under construction.

What is believed to be the lowest temperature recorded in early September here in many years was recorded this week, when the mercury twice fell below 28 degrees, killing practically all tomato and cucumber vines in the lower valley and the tops of potato vines in the middle and upper valley. — Hood River News

The city is going to build a new sewer on Federal street, deep enough to drain the basement of the auditorium at its lowest point, and fight out the matter of who will pay the costs afterward, in a lawsuit, if necessary. Decision to this effect was made last night at a meeting of the city council and auditorium plans committee, after City Engineer P.W. Marx had failed to put in an appearance. Mayor Stadelman suggested that the architects pay half the cost. — The Dalles Daily Chronicle

Chief of Police Howard Hollenbeck was, Monday of this week, trying to pick up the trail of a thief who entered the downtown office of Dr. L.R. Alexander Sunday night, and probably searching for narcotics. He is believed to have gained entry by climbing through a transom. “I guess he is going to be one surprised thief when he tries to dispose of, as gold, exhibits made of highly polished German silver, which he stole from the office, together with gold fillings worth not to exceed $2.50,” said Dr. Alexander. — Hood River News

Members of all tax-levying organizations in Wasco, Sherman, Gilliam and Hood River counties were being reminded today by County Clerk Henry Scherrer that tomorrow night, beginning at 8 o’clock in the county courthouse, a “school” for councilmen, school board members, county officials, budget committeemen and others connected with local finance, will be held under the sponsorship of the Oregon Finance Officers’ association. Purpose of the session is to acquaint those in attendance with the latest information on budget procedure. — The Dalles Daily Chronicle

Koberg State Park came up for discussion during the last meeting of the Oregon State Highway Commission. Commissioners approved a plea for bids to construct park facilities at the well-known local beach site. Bids will be received for the construction of park facilities consisting of a latrine, complete with water, sewage and electrical services at Koberg Beach Wayside along the Columbia River Highway. The project is scheduled for completion during the fall of 1961. — Hood River News

Boaters on Lake Celilo are being alerted by the Corps of Engineers to possibility of fluctuations in water level resulting from new, seasonal operation procedures at The Dalles Dam. Power Supt. Ralph Massman said the spillway at the dam is now dry and the entire flow of the river, presently near its annual low stage, is being channeled through the powerhouse turbines. Level of Lake Celilo could fluctuate as much as five feet. — The Dalles Daily Chronicle

Three sections of deteriorating city streets will undergo facelifts later this month in preparation for the upcoming winter, according to City Engineer Pete Harris. Earmarked for surface repairs are May Street from Fourth to 12th, 17th Street from May to Sherman and Fourth Street from Pine to Eugene. Since asphalt paving costs approximately $1.50 a square foot, the city opted for a less costly alternative known as “chip seal.” That cost about 22 cents a square foot. — Hood River News

The Columbia River InterTribal Fish Commission reversed an earlier ruling Monday and agreed to allow a two-day Chinook salmon season this week on the Columbia River. The suspension ... had been ordered due to low numbers of salmon reaching the river, but that fish counts at Bonneville Dam increased over the weekend. — The Dalles Daily Chronicle

A letter signed by more than 300 Skamania County residents asking for reconsideration of the proposed Little White Salmon hydroelectric project was presented at the Aug. 10 meeting of the Clark-Skamania Joint Operating Agency. The project as recommended would locate a diversion dam just below Willard. — White Salmon Enterprise

Friday, Sept. 14, 7 p.m.: The moment in time that brought people together — wherever they were. From the waterfront to the high school football stadium, citizens of Hood River joined in a national candlelight vigil at the same moment, in response to last week’s terrorist attacks in New York and Washington, D.C. A vigil at Overlook Memorial Park attracted a solemn crowd that swelled as the half-hour gathering went on. — Hood River News

You can’t buy a U.S. flag in The Dalles today, no matter how hard you try. There just aren’t any available. “We’ve been out since Thursday,” said Fred Meyer manager Dennis Thomson, and that was the refrain echoed by merchants all over town. Stores with flags in stock rushed to get them out of storerooms and available to the public. Demand has been intense since the tragedy on Tuesday (Sept. 11). — The Dalles Chronicle

Editorial by Gretchen Elsner: Last Tuesday morning, I emerged from my subway stop at Union Square on 14th Street in lower Manhattan and momentarily thought all was right with the world. Then I looked up. Awestruck rush-hour commuters clogged the streets to stare at the smoke pouring out of the Twin Towers, though none of us really knew at the time what we were seeing. I continued on to my law school on Fifth Avenue and 12th Street. Classmates, many who have traveled in Israel, heard and saw the planes crash and knew immediately we were under terrorist attack. — White Salmon Enterprise

Advantages Of Viaduct Over Columbia Told At Enthusiastic Session

The proposed construction of a bridge across the Columbia river above The Dalles was given tremendous impetus at meetings held today when plans for bringing the matter to a head were discussed.

If sentiment could build the bridge, the structure is as good as erected. All that remains is the formulating of plans for financing the enterprise.

Every speaker at this morning’s informal meeting told of some different advantage that would be realized if the bridge was built. The wonderful possibilities for centering traffic from all directions were pointed out by speakers from different localities.

At 12 o’clock the meeting was adjourned to Hotel Dalles where luncheon was served. Here the discussions were continued until 1 o’clock when the entire assemblage motored to the proposed site of the bridge.

Men who have never visited The Dalles of the Columbia were amazed at the narrowness of the river at this point. The proposed site is a short distance above Big Eddy and the Washington approach to the bridge would be near Wishram, the Indian village. The river is so narrow that stones were thrown across to the Washington side by members of the party.

Following the visit to the site of the bridge the delegates returned to The Dalles to hold a formal meeting and make definite plans for launching the enterprise, with a view to financing construction through public subscriptions. — Sept. 15, 1921, The Dalles Daily Chronicle

Parking space for cars in the business sections of Hood River, long productive of headaches to members of the city council, is going to be solved at an early date — at all events, city fathers hope so.

This week plans are in the hands of City Engineer Hobson providing for the conversion into car parking lots of the Mrs. Jennie Hunt property at Cascade and Seventh streets, and a nearby tract owned by the city. When ready, these areas will provide parking space for about 50 cars. Because many of its workers own cars which are parked adjacent to the cannery and Cascade plant, Apple Growers Association is cooperating with the city in the solution of this problem.

In the more central business area, however, solution of this parking problem is not so easy, and one discussion still follows another, with the main objective still in the dim distance. Parking meters, which were suggested, have been ruled out on the grounds that, while owners of cars would have to pay for parking, this would not solve the problem.

Members of the council are now concentrating on a plan to secure lots for free parking and hope this will finally prove to be the way out of the difficulty of providing car parking space for motorists who want to buy at local stores. — Sept. 19, 1941, Hood River News

Convict Girl May be First Such Executed

Pakistanis to cooperate with U.S.