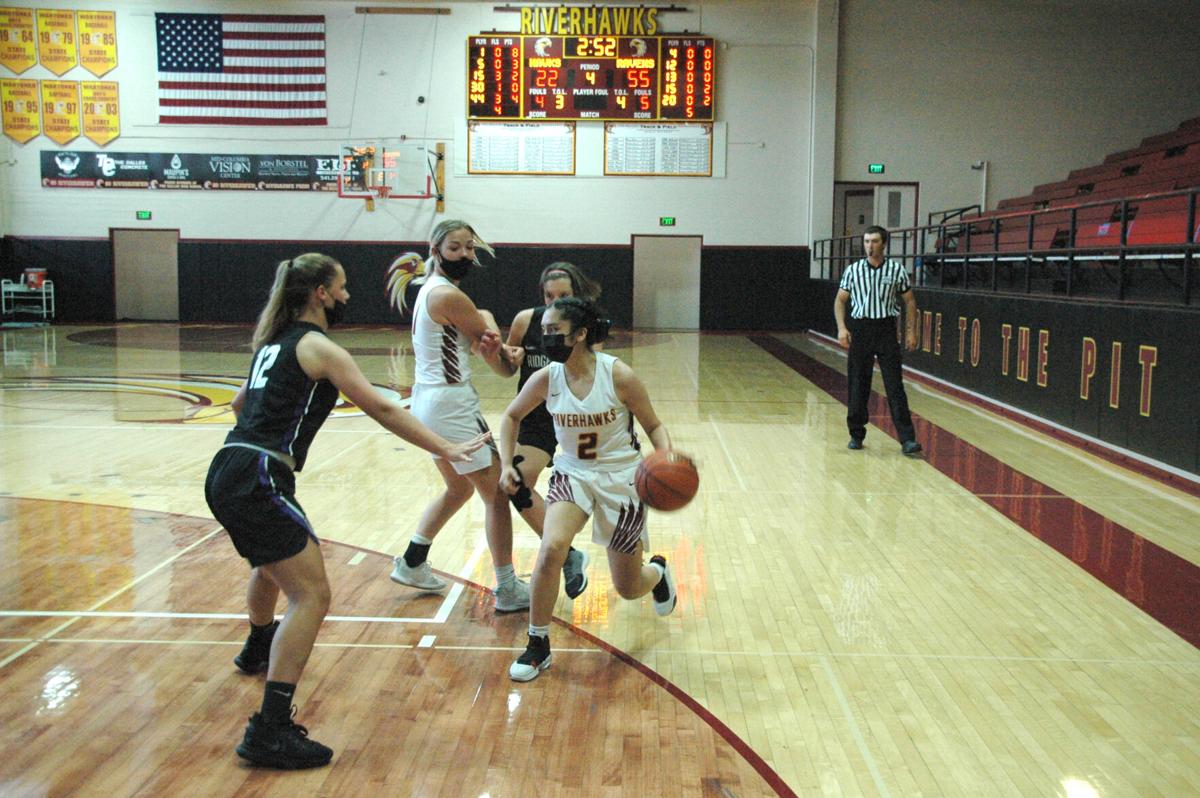 Veronica Robledo (#2) drives towards the basket as Cadence Snyder (#1) sets a screen. 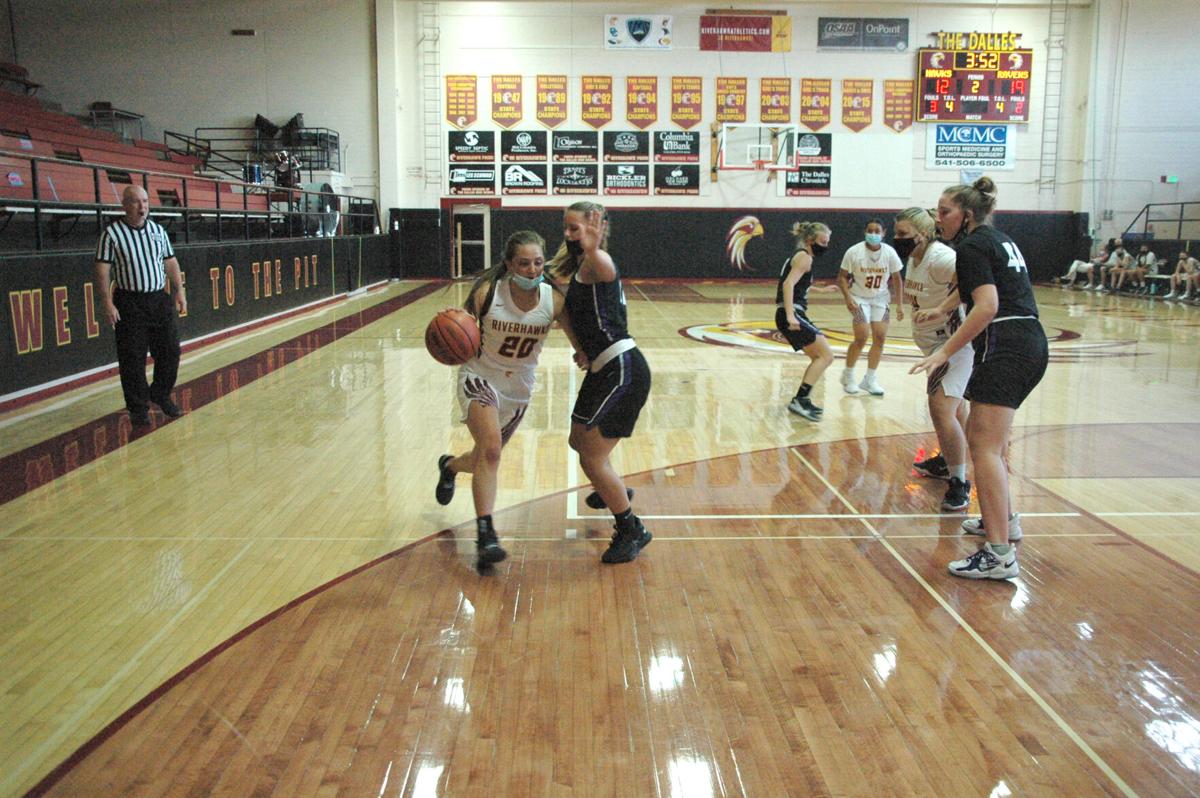 Hanna Ziegenhagen (#20) drives to the hoop. 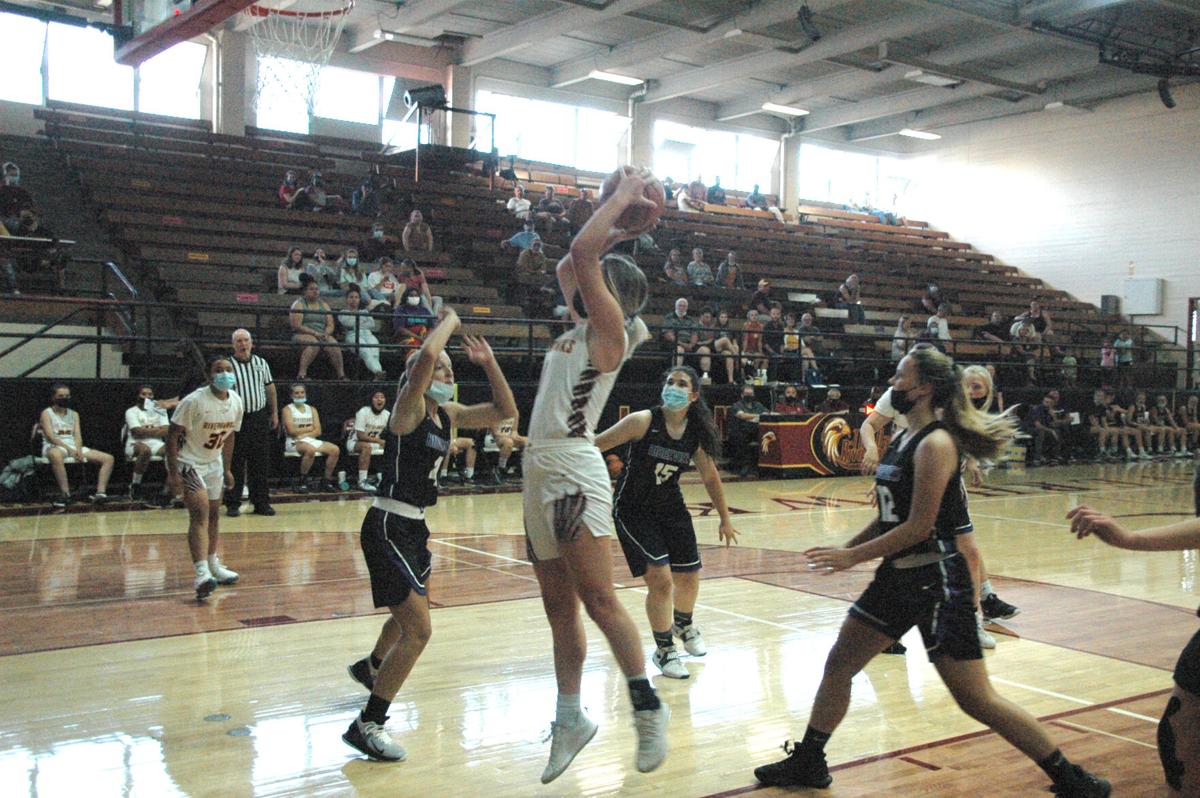 The Dalles Senior Cadence Snyder shoots a jumper in the post.Mike Weber photos 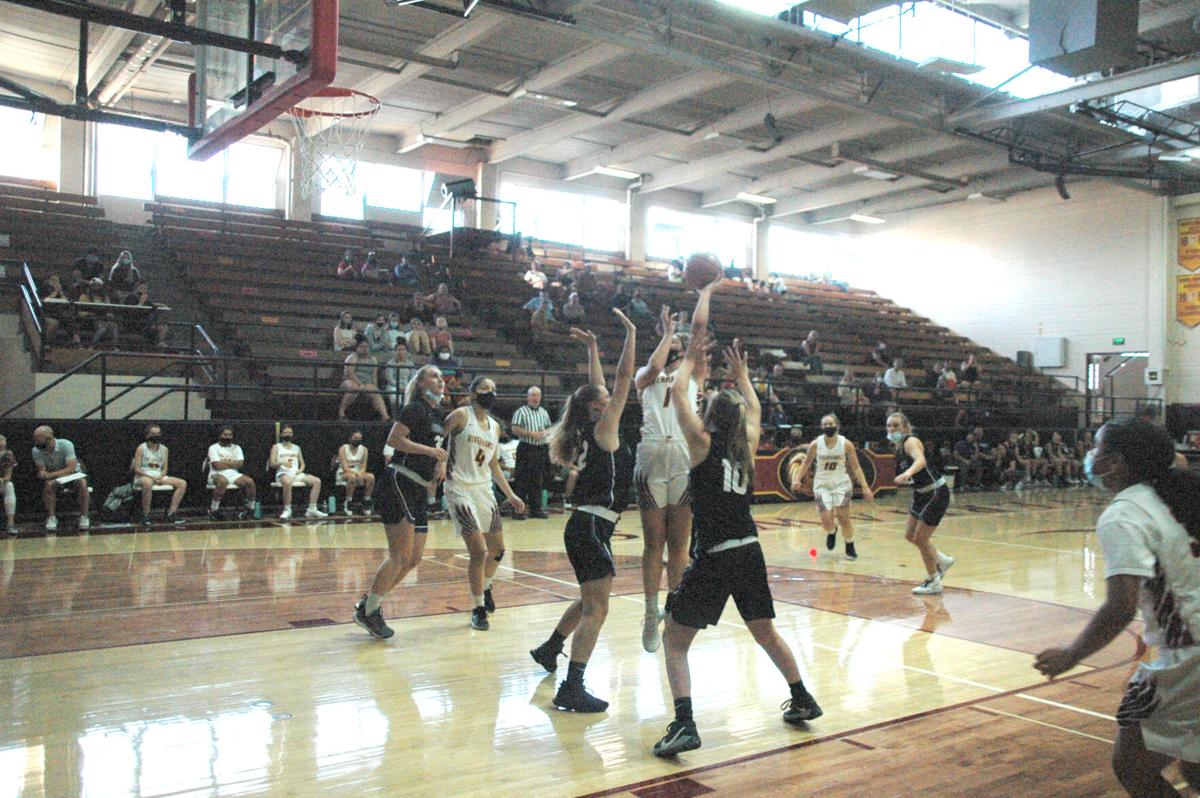 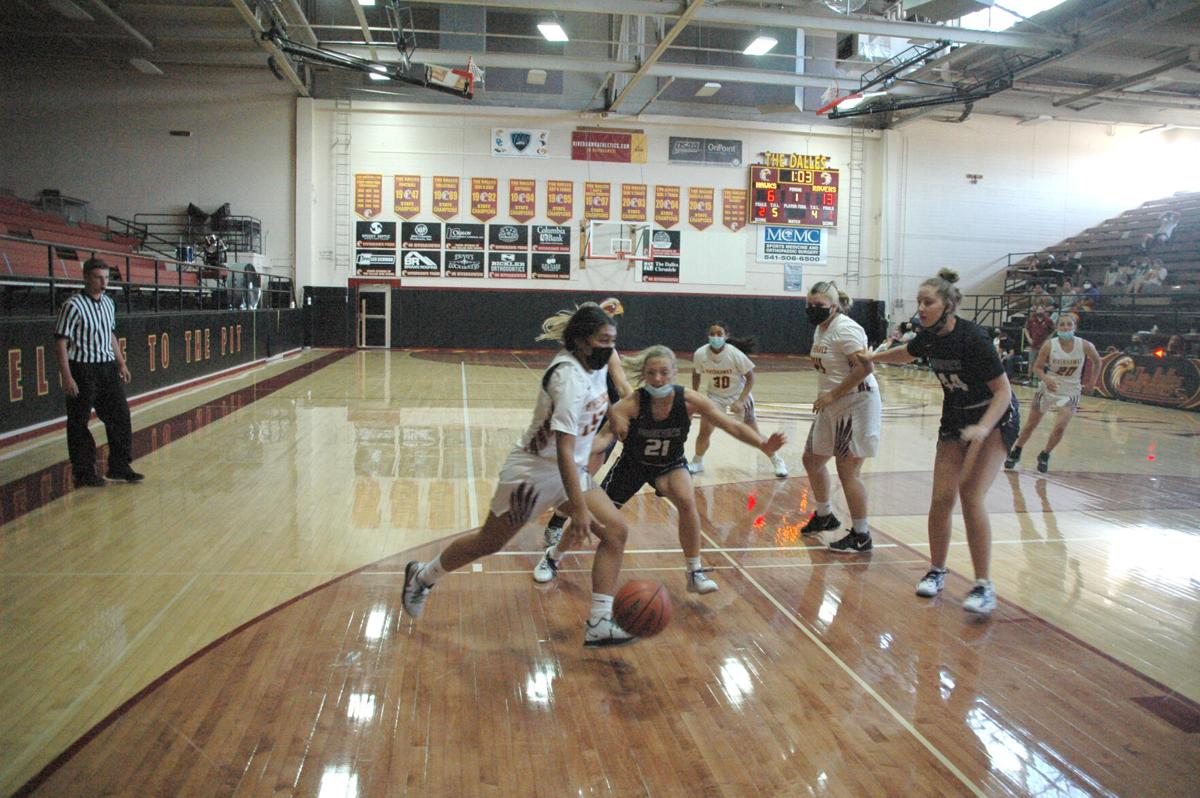 Veronica Robledo (#2) drives towards the basket as Cadence Snyder (#1) sets a screen.

Hanna Ziegenhagen (#20) drives to the hoop.

The Dalles Senior Cadence Snyder shoots a jumper in the post.Mike Weber photos

Early in a Class 5A Intermountain Conference girls basketball game last week, the underdog The Dalles High Riverhawks appeared to have a slight chance of an upset win over highly regarded Ridgeview.

The Riverhawks (1-4 IMC, 1-4 overall) trailed the league-leading Ravens (5-0 IMC, 7-1 overall) by three points midway through the second quarter. The Riverhawks, guided by first-year Coach Keith Howe, played the Ravens evenly through most of the first half to keep the contest close. The talented Ravens pulled away in the second half though for a 55-27 victory Friday at The Dalles High School.

“Ridgeview is the best team in our league; they’re undefeated in league and we were in the game, so I’m just very proud of our effort,” said Howe. “This was one of our more relaxed efforts, which is good, because I’ve been trying to get the girls to relax a lot and they did and they actually played good ball tonight. We played good pressure defense and we created some turnovers. If there’s such a thing as a good loss, then this was a good loss.”

Ridgeview, a 2019 OSAA first-round state playoff participant, scored first to take a 2-0 advantage. Riverhawk senior Cadence Snyder sank a seven-foot baseline jumper from the right side, knotting the game 2-2 with 6:40 on the clock. On the Hawks’ next possession, sophomore Marisa Rojas fired in a jumper from the free throw line, giving The Dalles its only lead of the game at 4-2.

“I had lots of fun and we played pretty well against the top team in our league,” said Snyder, one of three seniors along with Keisha Oregon and Hanna Ziegenhagen who participated in The Dalles High graduation ceremony June 5 at Sorosis Park. “We were all expecting to come out here and lose by a lot more, but that didn’t happen. It kind of sucks because it’s my last season and it’s been real short, but we’re making the most of it with the people that we have on our team and it’s been a really fun environment for me.”

The Ravens scored four straight points to take a 6-4 lead and they never trailed again. The Hawks played with a high energy level and stayed within striking distance. The teams traded baskets and when Natasha Muzechenko (five points) fired in an outside jumper, the Hawks trailed 8-6. Oregon helped keep the score close and after her jumper in the post area, Ridgeview led 13-8 at the end of the first quarter.

“I think we all had a good effort and we were pretty well focused on this game,” said Ziegenhagen. “In some of our other games, we haven’t played very well, but we did a better job today because we just tried to stay more calm. I honestly felt a little surprised when I saw how close the score was during the first half and I actually felt like we were doing a good job against them (Ravens). I’m having a lot of fun and I’m glad that I came out to play on our team. Hopefully, we’ll get one or two more wins.”

“The fact that we were in the game as long as we were, indicates that we competed really well and it was just a fantastic effort and everyone played with all their heart,” said Howe. “We only had two weeks of practice, so we didn’t have much time to prepare for the season and for a young team like this (two freshmen, three sophomores), that’s really hard. We had one girl (Ziegenhagen) who showed up for us one day before our season opener (May 25). Jeilane Stewart was still playing softball and so she couldn’t start practicing with us until a couple of days prior to the season.

“I was just hoping to see steady improvement throughout the season and that’s exactly what I’ve been seeing. We’re hoping to win one or two more games before the end of the season.”

The Ravens played tough man-to-man defense in the third to slow the Hawks offense and they scored 12 straight in the quarter to take control of the contest, 37-12.

Snyder scored the Hawks’ first four points of the fourth period and her jumper in the lane trimmed the margin to 43-22. Ridgeview regained some momentum with a 10-0 run, making it 53-22. Snyder, who scored the Hawks first basket, finished the game the way she started by scoring the Hawks last basket for the 55-27 final margin.

“I’m happy with my performance and I was surprised about how well I actually played,” said Snyder, who led the Hawks in scoring with 12 points. “We’re hoping to win a couple of more games and I think we’ll get another win against Hood River. I’m also very excited to be graduating and it couldn’t come any sooner, but I’m also kind of sad about it too. I’m glad that my mom and grandmother came out to watch me play tonight too, so that was great.”

The Hawks faced the Redmond Panthers (2-4) on Tuesday (results came after the printed edition deadline) and they meet the Hood River Valley Eagles (0-6) in a 6:30 p.m. contest at home Thursday. The Hawks beat the Eagles 47-38 May 27 at Hood River Valley High School.

The Dalles has three games remaining in the short 10-game spring season. The Hawks play their final home game June 11 at 6:30 p.m. versus the Crook County Cowgirls (3-4) on Senior Night at The Dalles High School. Snyder, Oregon and Ziegenhagen will be honored along with their parents in a pregame ceremony.

The Dalles concludes the season with road games June 15 at Pendleton (3-1) and June 17 at Ridgeview.

The Dalles hangs with league leaders for a half