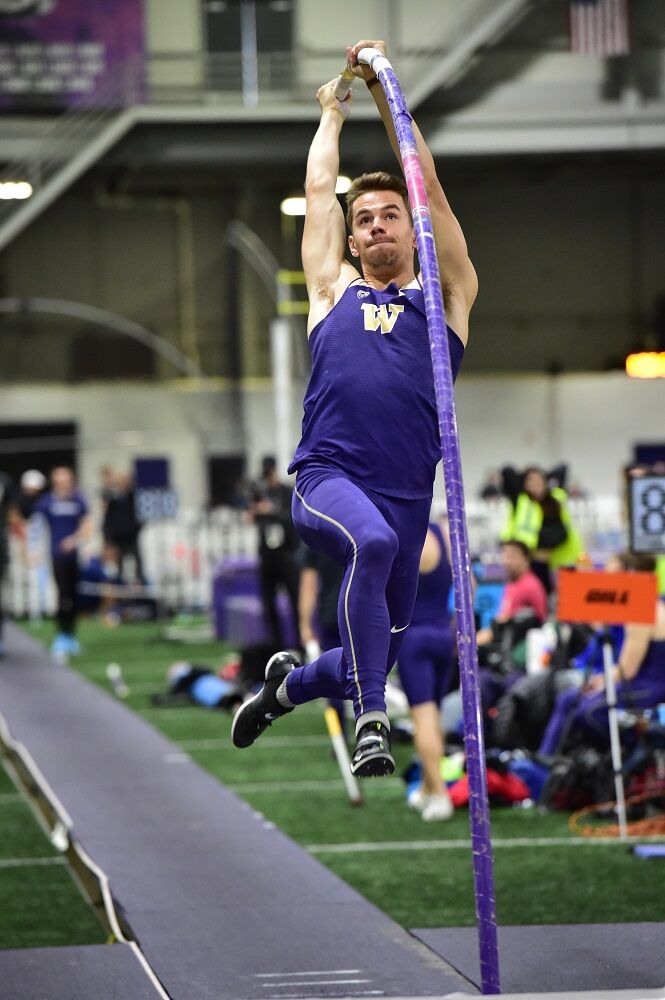 Parker Kennedy competes in the pole vault while in college. He was a Hood River Valley champion in 2015. 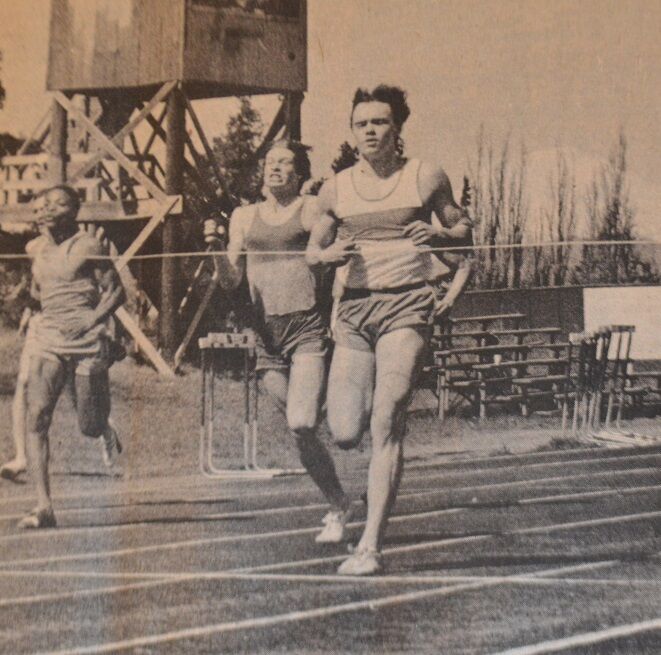 John Torgerson wins a race at the 1981 Lions Invitational at Hood River Valley High School; photo was taken a few years before the construction of Henderson Stadium, on the west side of the track beyond the finish line.

(Editor’s note: This is the fourth in a series of stories about Gorge all-time track and field bests. Track and field, because of its relatively standard distances, allows for somewhat of a level playing field when comparing athletes from different eras, giving rise to the possibility of a virtual meet. Each school was allowed three entrants in individual events and one relay. Other installments in the series: girls meet day one, was published Dec. 15; boys meet day one, Dec. 22; girls meet day two, Dec. 29.)

A brief visit from local law enforcement added some levity to the second day of the 2020 Gorge Virtual Track & Field Invitational.

Despite that momentary disruption, host Hood River Valley kept its focus and methodically worked its way into the lead. The Eagles won the day’s first event — the 4-by-100 meter relay — and the last — the pole vault — before confused athletes and spectators were ushered off the grounds. Midway through the competition, Hood River County Sheriff Deputies showed up after receiving a noise complaint.

HRV throws coach Troy Tactay handled the situation with aplomb. He discretely used a pocket remote to turn down the volume on the sound system in the bed of the gray 1990 Chevy Silverado, with custom lift, parked near the shot put. With his other hand, Tactay reached into his pant pocket and gave the deputies meal tickets to the concession stand. (Later, it was learned that the noise complaint came from a cell phone from nearby Indian Creek Golf Course. Apparently, a prominent local businessman playing in a member-guest event, skulled his approach shot into the pond behind the second hole just as the sound system was turned on.)

The steady stream of rock music — Bad to The Bone, Eye of the Tiger and The Final Countdown among the selections — was purposely played to help the shot putters loosen up. The Silverado was parked just outside the fence bordering the east side of the shot pit. The custom speakers in the bed were tilted upward and blared for 45 minutes, as the spectacle resembled the build-up to bull riding at a major rodeo.

The competition had somewhat of a fraternal feel, although James Atoe, who was wearing University of Washington garb, and Sebastian Barajas, who was decked out in University of Oregon green, kept an uneasy distance from each other. Wahtonka High’s Schmidt brothers, Ron and Butch, Jared Cornell of The Dalles, and Henry Buckles of Hood River talked Oregon State Beaver football. All four throwers, plus Barajas and Robert Atoe of The Dalles, surpassed 60 feet, with Ron Schmidt winning at 63 feet, 11.25 inches. Older brother Butch reminded Ron that he also had two state shot put titles, when he flashed the peace sign; not to be outdone, Cornell wiggled three fingers in front of both of them.

On the track, HRV powered its way to first place in the short relay, edging The Dalles, 43.04 to 43.08. In third was the 2019 state championship team from Dufur at 43.83. Running the second leg for The Dalles was Robert Tilton, who came back two events later to take the 100 meters in 10.74 seconds. An interesting sidenote about the 100, was the fact that five decades were represented in the final. This was most visible in the stands, where groups of young fans in athletic shorts — of varying lengths — sat across the aisle from groups in hot pants and/or colorful bell bottoms.

There was similar representation in the 1500 field, which was loaded with state champions and runners from seven different schools dating from 1966 to 2017. The Dalles had used its team depth — despite not having any individual champions — to take the first-day lead, and the Riverhawks got their first gold and 10 team points in the metric mile from standout Scott Limbach.

Limbach, who finished sixth in the virtual 3000, swept the distance races at the Class 3A state meet his senior year in 1998. He also won the state cross country title in the fall of 1997. He confidently controlled the virtual 1500, winning by nearly 15 meters (3:55.36) over a tight pack of three runners led by Goldendale’s Randall Jones. Jones, Greg Vandenburg of Stevenson and Bon Bullock of Lyle were separated by less than a second. Jones (the Washington 1600 and 3200 state champ in 1983) and Vandenburg (1600 and 3200 champ in 1982) were familiar foes, having competed head-to-head locally as well as state. But Bullock came out of nowhere down the final stretch; it appeared he misjudged the finish line a bit (understandable considering he was used to running another nine meters when won three successive mile state crowns from 1965-67).

Columbia High was relatively silent most of the meet, but the Bruins made major noise in the 400. Matt Lovrin (2005), Adam Neff (2003) and Keith McMillan (2002) finished 1-4-6, providing 18 points to boost Columbia’s point total to 46, putting the Bruins just three behind second place Hood River and in a tie with Goldendale at the time.

The Timberwolves’ mini-run at the larger schools came on behalf of successive runner-up finishes from Jones, Marty Foster in the 100 and Joel Miller in the 400. It was capped by Mike Erland’s photo finish tie with Lyle’s Mike Vorce in the 110-meter high hurdles. Meet officials took almost 12 minutes — somewhat reminiscent of consulting the photo replay booth seemingly every other possession of NFL games nowadays — to try to declare a winner. They eventually settled on giving out two first-place medals, but not before a woman in the stands handed over a print from her Polaroid OneStep 600 instant camera for them to view. Erland’s nine points combined with Brian Golding’s five for placing fourth gave Lyle 60 for the meet and suddenly the Cougars were in the thick of the team race.

For his part, Erland was done after the highs, but he did agree later to run a 180-yard low hurdles exhibition race to celebrate his 1976 state meet performance. He was the high point athlete in that meet, winning the 100, high hurdles and low hurdles (contested over 180 yards at the time).

Hood River’s Parker Kennedy, who opened the meet with a leg on the Eagles’ virtual champion short relay, closed the competition by edging teammate Bill Jones by one inch in the pole vault, 15-9 to 15-8. Their efforts, and that of David Phillips, who was sixth at 15 feet, produced 21 team points for the Eagles, pushing them to their first team lead, 83-79, over rival The Dalles. Kennedy, now working on his decathlon marks at University of Washington, was jogging over to warm up for the intermediate hurdles when the starter’s gun brought the meet to an abrupt and confusing halt.

(Next issue: Day three of the 2020 girls virtual meet — depending on the outcome of an alleged co-investigation by officials from two states. Thanks again to the many Gorge track and field coaches who helped compile entrants. Apologies in advance to any athlete who was overlooked. Readers are invited (and encouraged) to send in corrections, all-time best additions, and comments to joepshow@aol.com.)

Rules: Individuals can complete in four events including relays; one relay per school; three entrants per school in each event.

Track & Field focus: All in a day’s work

All in a day’s work has different meanings for different people. Collins Dictionary notes all in a day’s work means, “something people don’t mind doing, although it may be difficult, because it is a part of their job — or they often do it.” Think, “Heigh ho, heigh ho ...”

White Salmon’s Heidi Shultz arguably tops the list. Shultz, who is more known nowadays for her volleyball coaching than for her track and field prowess, was a four-time Washington state 100-meter champion and four-time 200 winner. For good measure, she won the 400-meter title her senior year in 1993.

Four events over two days often means eight events when figuring in preliminaries. An hour east of White Salmon, and some 20 years earlier, Goldendale’s Mike Erland’s day of work his senior year matched those by Shultz. Erland raced to first-place finishes in the high and low hurdles, was second in the 100, and he ran a leg on the Timberwolves’ state-placing mile relay for good measure. Erland was the high-point scorer in 1977 in the Class A finals with 28.5 points, helping Goldendale to a runner-up finish to Cashmere. His junior year he scored 30 points, winning the 100 and both hurdle races, but didn’t have a leg on a relay to top off the meet. In the other direction and more recently in 2019, Stevenson’s Lincoln Krog scored 36 points at the Class 1A state meet. He won the high jump, long jump and triple jump, and finished third in the 100 meters.

Arguably the true ironmen — and women — who put in more than a day’s work, are those who compete in the 400 in addition to other events; more often than not, they’re also on their school relay teams, as well, athletes like Joel Miller from Goldendale; Matt Lovrin and Adam Neff of Columbia; Cody Carlson, 400 school record-holder from Lyle; Ian McNaughton from Hood River; Caleb Sperry of The Dalles.

Finally, Sperry, a two-way, first-team all-state football player his senior year, had a relatively easy time at the state track meet state in 1994 when he finished second in the 400. But his performance as a junior is worthy of bringing up the next time his HRV football players complain about having to do preseason daily doubles. Sperry ran a leg on The Dalles’ state champion 4-by-100 relay, finished fourth in the 400 and capped off his state meet with a leg on the third-place 4x400 relay — all in a day’s work.