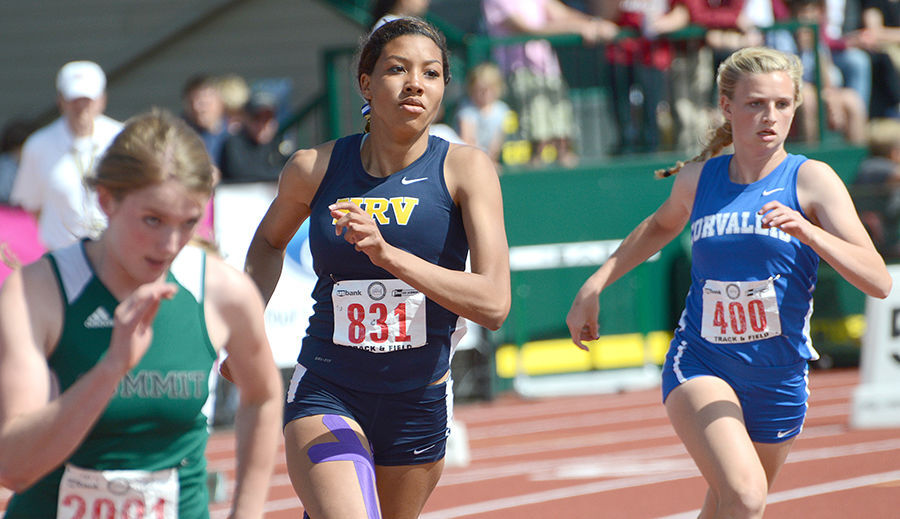 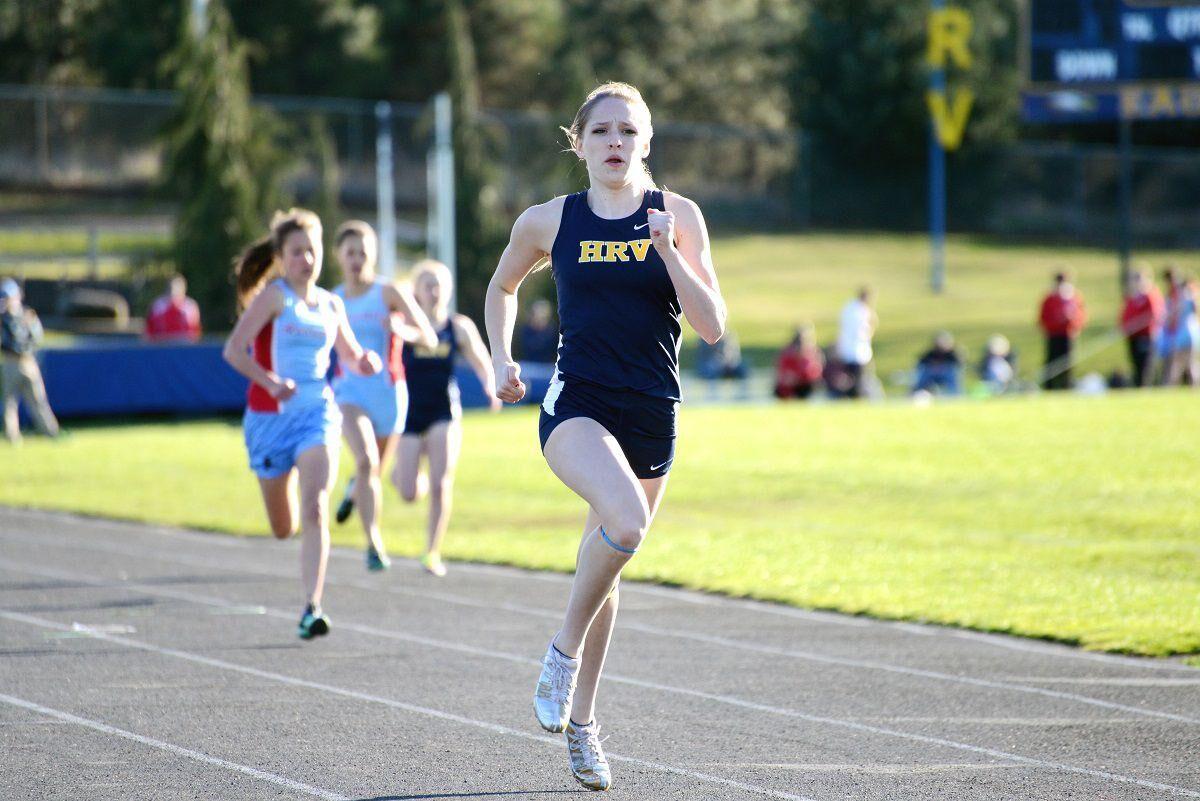 Hood River’s Emily Miuhkola was among those leading the virtual 2020 pack.

Editor’s note: This is the third in a series of stories about Gorge all-time track and field bests. Track and field, because of its relatively standard distances, allows for somewhat of a level playing field when comparing athletes from different eras — giving rise to the possibility of a virtual meet. Each school was allowed three entrants in individual events and one relay. The first installment in the series was published Dec. 15; the second, Dec. 22.

Day two of the girls 2020 Gorge Virtual Track & Field Invitational left some people dazed and confused, while others went about their usual business of performing at the highest levels ever witnessed in this area. At the end of the shortened day, after three lead changes, Hood River Valley overtook The Dalles in the team race.

Leading the efforts on the track were a who’s-who of state champions and/or school recordholders, including Hood River’s Emily Viuhkola and Jestena Mattson, MaryAnn Graves of Columbia and Mandi Fitz-Gustafson of The Dalles. The field events were highlighted by the meet’s only sweep and a shot put competition where nine throwers surpassed 40 feet.

The confusing part came after seven events, when a group of coaches held a hurried — and noticeably hushed — meeting on the Eagle logo in the middle of Hood River Valley’s turf lacrosse field. The Dalles Coach Garth Miller stood next to White Salmon Coach Tom Anderson and read aloud a text message from the OSAA (the same message came in an email to Trout Lake’s Steve Allaway; Steve Thompson received it via fax; while it arrived in the mail three days later to former coach Rich Hedges). After the meeting (which halted the 800 meters just as the runners were called to their start lines) athletes were ushered back to team buses and the facility was cleared.

Up to that point, the estimated 2,500 fans were treated to seemingly uninterrupted (other than a very unusual pole vault competition) record-setting performances, kicked off by the 4x100-meter relay. Three teams entered the meet with 50-second times, and weather conditions were favorable that they would go faster. Stevenson, powered by Amanda Stump’s opening leg, held the lead after the first turn, but host Hood River would not be denied on this day. Kassidy Davison and Anna Schlosser, legs 1 and 2 for the Eagles, had great views across the infield of the Viuhkola-Mattson handoff, as the Eagles powered home in 48.83. Andrea Bailey, the 200 and 400 school recordholder from The Dalles, anchored her team to second at 49.21, while Stevenson settled for third at 49.76.

(One fan standing outside the fence near the finish was overheard saying that not since Summit of Bend had competed on the HRV track, had three girls teams dipped under 50 seconds in the short relay at the same meet. The person standing next to her commented: “Yeah, Summit’s varsity, JVI and JVII teams.”)

That aside, the relay set the tone for the back-and-forth team competition, as Hood River inched two points closer to first-day leader, The Dalles. The Riverhawks reasserted themselves in the next race, the 1500, led by sisters Mandi and Heather Fitz-Gustafson. The stellar field included a combined 17 individual state distance championships (including cross country). Pre-race hype was responsible for drawing a couple of interested spectators from the Kenyan women’s national team, which was midway through a month-long training camp at Maupin’s new state-of-the-art track facility overlooking the Deschutes River.

The metric mile didn’t disappoint. Pacesetter Frances Dickenson, who just missed making the final, took the pack through a 73-second first lap before stepping off the track. (Coach Brandon Bertram then sent Dickenson off on Indian Creek Trail to pace the HRV boys cross country team through a 400-meter hill repeat workout.) Carissa Seward of Goldendale and Christie Paul of HRV resumed their 3000 rivalry, striding side-by-side at the front for the next 700 meters. Neither could maintain the pace down the backstretch, as the Fitz-Gustafsons and HRV’s Lauren Lloyd passed them on the outside just prior to the final curve. Older sister Mandi maintained a two-stride lead over the final 100 to win in 4:38.66. Sister Heather held off Lloyd for second, 4:39.43 to 4:39.64.

The 1-2 finish by The Dalles enabled it to pad its lead once again, but HRV figured to score heavily in the next two track events, the 100 and 400. As expected, Mattson overcame her slow start and powered from behind to win the 100, while Columbia’s Heidi Shultz edged Maria North of The Dalles for second. Shultz was noticeably winded, as well she should have been. Earlier in the day, while a club soccer team was practicing, Shultz and her daughter, Hannah Polkinghorn (No. 3 all-time on Columbia’s 100 list, 12.76 seconds) settled a family sprint squabble. Mom (12.1-second best in 1993) beat daughter, but according to one bystander, mom may have jumped her own, “Ready. Set. GO!” command just a tad bit. (Hannah, a junior this year at Columbia, has time to move up the family sprint ranks.)

Shultz continued her busy day, getting a clean start along with the rest of the 400 field in the one-lap race. Her quick burst was matched by Andrea Bailey of The Dalles and HRV’s Viuhkola, and by 200 meters it was clear one of the three would prevail. Bailey, who played in an impromptu basketball scrimmage the night before in order to complete a recruiting tape for Saint Mary’s College, led with 50 meters to go, but was passed by Viuhkola, the 2015 state meet runner-up in both the 400 and 800. Viuhkola’s 10 points, and the combined nine from teammates Lloyd and Suni Davis (fourth, fifth) pulled the Eagles ahead of The Dalles, 105-96.5, for the first time in the meet.

That prompted The Dalles coaches to call a team meeting in the east grandstands, but they quickly disbanded after Coach Miller was handed the shot put results. A 21-point event put his team back in front, 117.5-115. Neticia Enesi, the 2006 Class 5A state discus champion, led the way at 43-feet, 9-inches. The top five throwers were beyond 43 feet; all nine finalists reached at least 40 feet. To put that into perspective, only two Gorge girls shot putters, both multiple state champions, in the past 10 years have thrown farther than 38 feet: Dufur’s Taylor Darden (39-6 in 2015) and Trout Lake’s Liz Fink (39-2, 2019).

Columbia’s MaryAnn Graves didn’t make the shot put final, but she warmed up with the competitors and tossed her only throw 39-10 before jogging across the infield to start her high hurdles pre-race routine. Graves’ stellar prep career led to a scholarship to University of Idaho where she focused on the heptathlon. In her first try at the event she scored 4,687 points, the best prep mark in the nation in 2001. Graves won four events at state her senior year for the Bruins: The 100 high hurdles, 100, long jump and shot put. Her main competition in the virtual hurdles was Nancy Jones of Stevenson, the 1980 Class 1A state champion. Both dipped under 15 seconds, with Graves winning 14.5 to 14.7.

The Dalles outscored Hood River 13-8 in the hurdles to pad its lead, 130.5-123 in the team competition. But the Eagle fortunes were about to change in a big way, as Coach Shawn Meyle ceremoniously unlocked the new UCS pole vault pit. The long-time HRV vault coach lamented for days about having to leave two 11-foot vaulters (including 2019 state champ Poppy Miller) out of his lineup, but unveiling the facility seemed to ease some of that pain. Meyle would unveil another “mondo” surprise mid-competition, which some people later — mistakenly — surmised led to the hurried coaches meeting that abruptly ended the meet.

Two-time state champ Olivia Campbell passed until 10-6, and by that time the field was reduced to the three HRV entrants (resulting in 24 team points). McKenna Hering cleared 11-3 to finish third, and Dana Huseby went out at 12 feet after a second-attempt make at 11-9. Campbell cleared 12-1, but more importantly, her vaults were becoming cleaner the higher she went — indicating she might be in for even greater things this day. That all came to a screeching halt when the two volunteers who were replacing the bar on the standards revealed themselves.

Sandi Morris and Armand “Mondo” Duplantis were winding up a week of photo shoots and promotional work at the Nike campus in Beaverton the prior evening when Hood River native (and Nike employee) Nate Boyden offered to show them the Gorge. One thing led to another and the two Olympic vaulters brought a car-trunk-full of track gear to the virtual meet at Coach Meyle’s invitation during a chance morning encounter at Egg River Cafe.

After a little encouragement, the two started warming up and the virtual field joined the other wide-eyed spectators at a pared-down version of the pole vault summit. Morris had the bar placed at 14 feet, easily cleared it, and then jokingly grabbed it off the standards on her way down. Duplantis realized the highest the HRV equipment could stretch upward was 18 feet, so he did some practice vaults without a bar, much to the amazement of the onlookers. A minute later, the meet score was updated over the public address system — “The Dalles 137.5 and HRV … 147” — followed by Jim Puckett firing his starter’s gun, declaring the meet over with six events yet to be contested.

(Next issue: Day two of the 2020 boys virtual meet. Thanks again to the many Gorge track and field coaches who helped compile entrants. Apologies in advance to any athlete who was overlooked. Readers are invited —and encouraged —to send in corrections, all-time best additions, and comments to joepshow@aol.com.)

Virtual Meet Rules: Individuals can complete in four events including relays; two of three distance events; one relay per school; three entrants per school in each event.