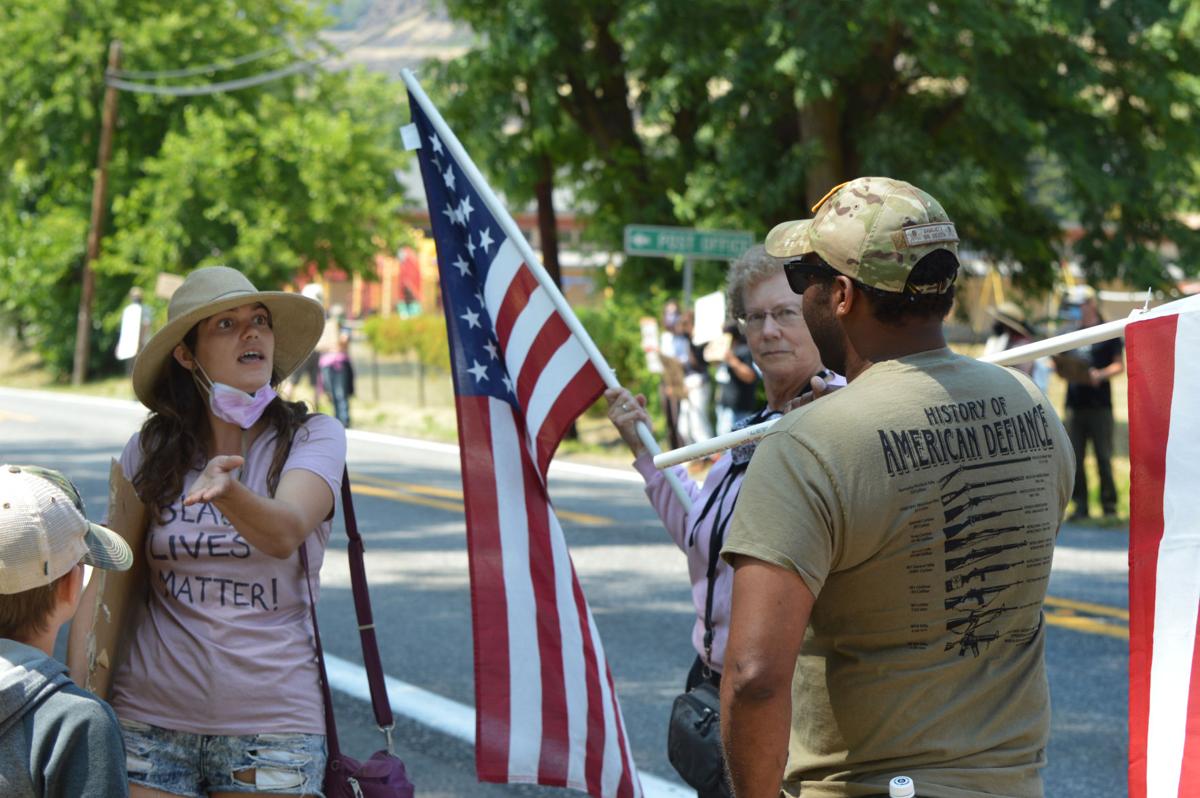 Elyse Martin of Goldendale, left, argued that inequality is something white Americans must own up to, while Kareem Patton, right, said the concern is overblown, in a roadside debate in Lyle on July 2. 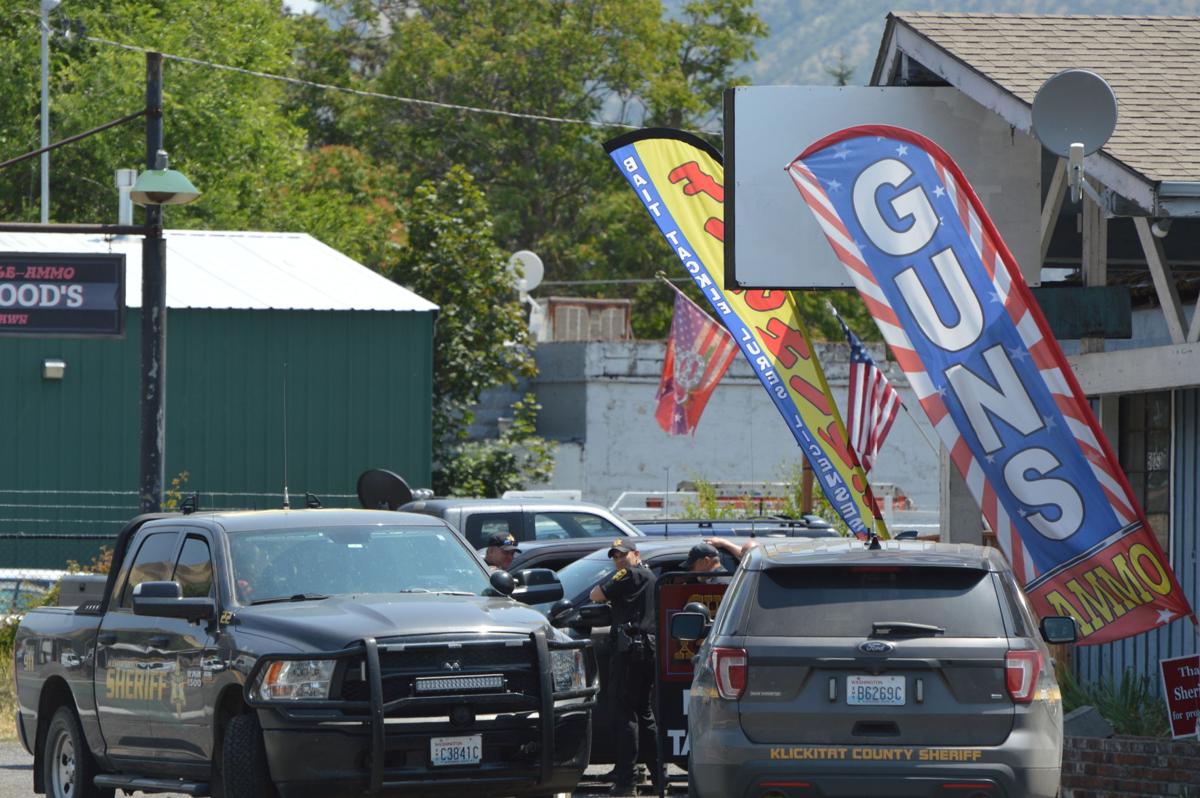 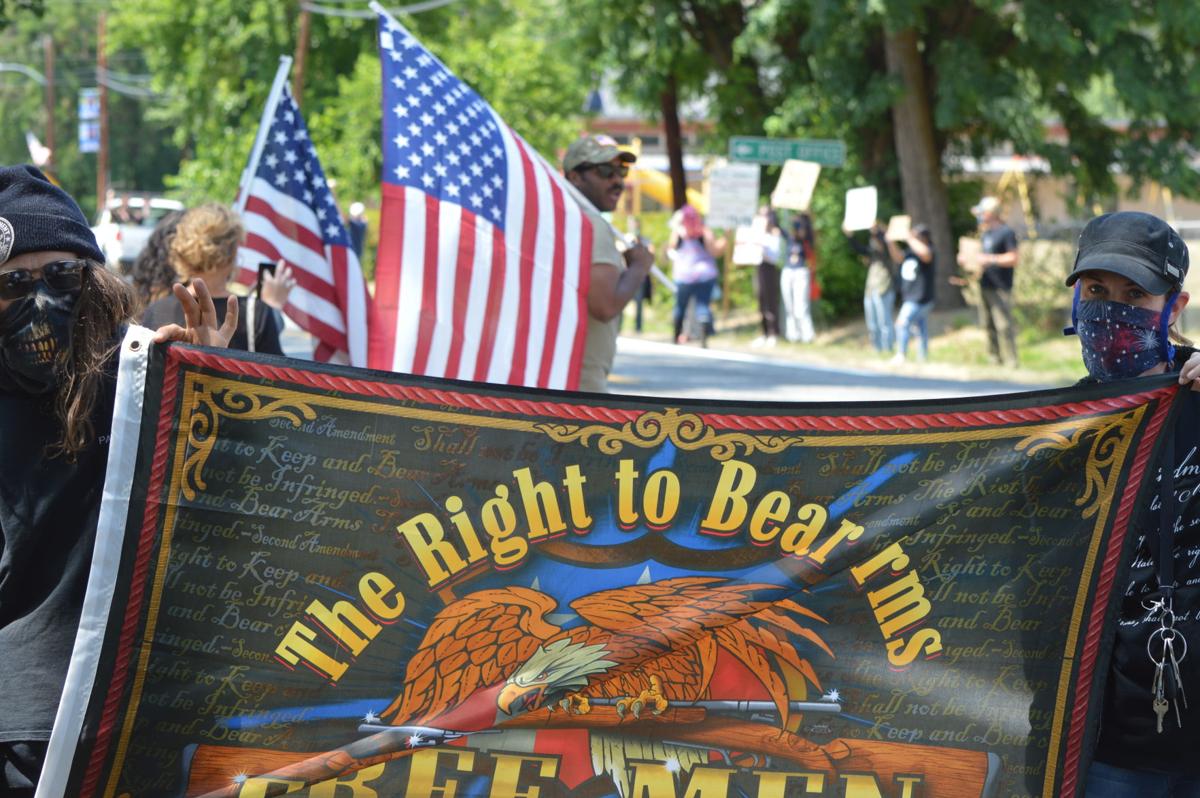 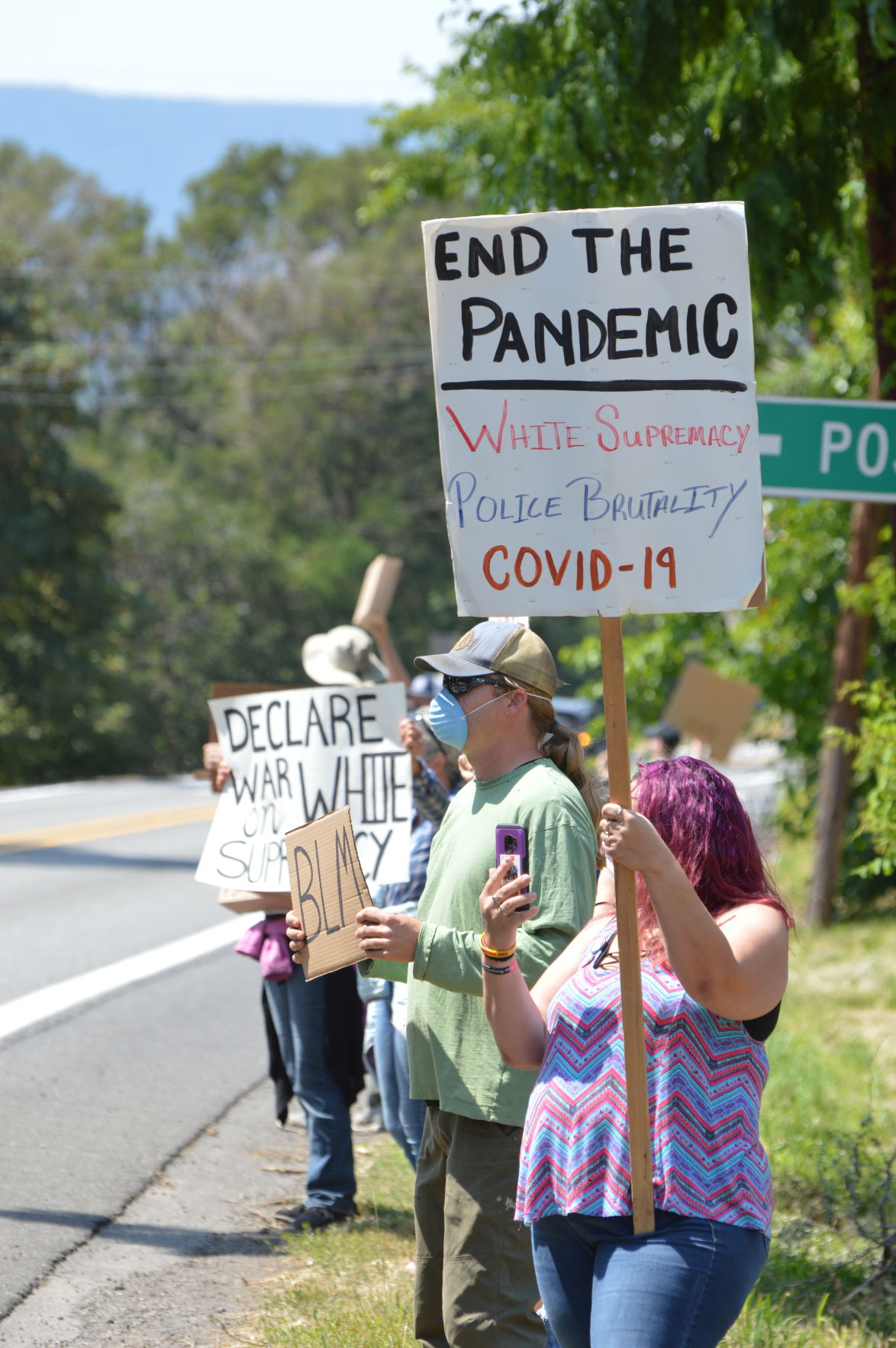 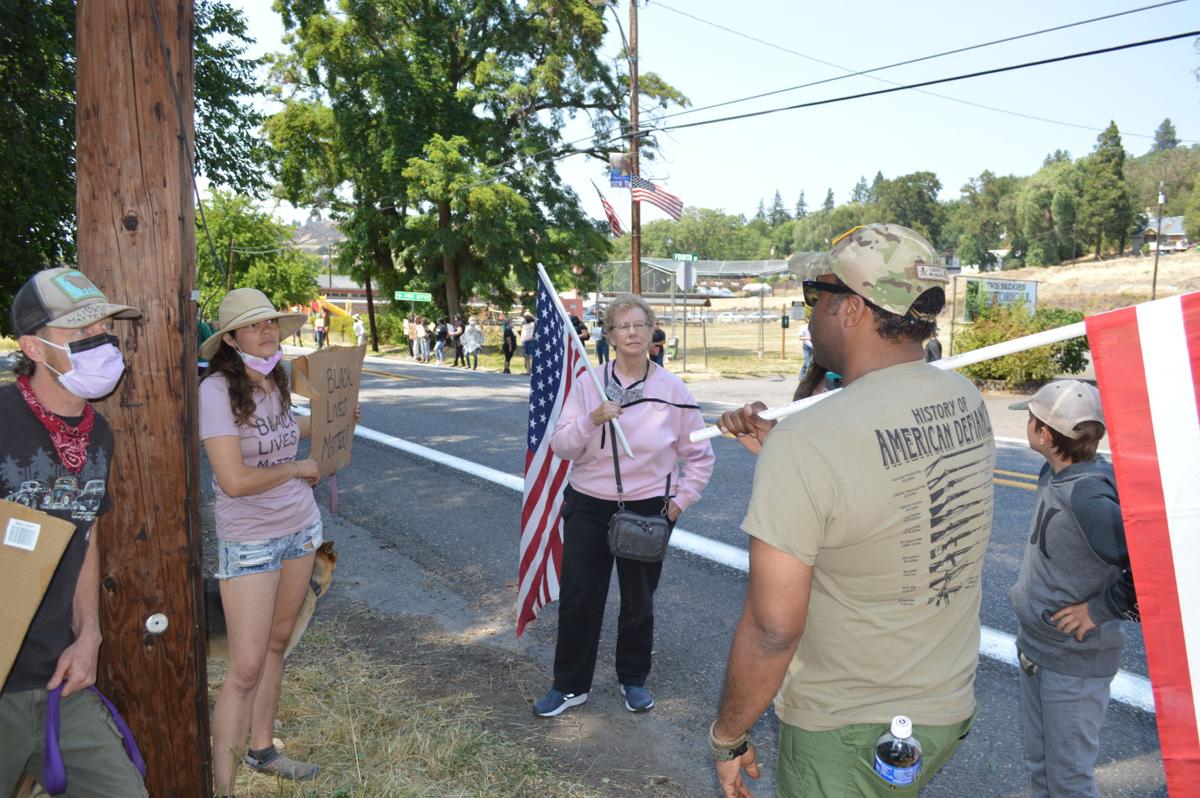 Elyse Martin of Goldendale, left, argued that inequality is something white Americans must own up to, while Kareem Patton, right, said the concern is overblown, in a roadside debate in Lyle on July 2.

Gorge Black Lives Matters events in the past two weeks included two in the small Washington community of Lyle, population 500.

The first was under the radar, the second one had definite buzz.

On July 2, about 30 Oregon and Washington residents gathered on Highway 14 at Fourth Street, the corner of the Lyle Activity Center property, lining Highway 14 at Fourth Street on both sides of the road. It drew a small group of counter-protesters, including citizens gathered at Jake Woods Gun and Pawn, three blocks east, across the street from Lyle Community Center. At least five Klickitat County Sheriff’s Office deputies patrolled town, and at least three sheriff’s vehicles were stationed at Jake Woods’.

On June 25, a similar event was organized by local residents, with about 30 people opposing racism in memory of George Floyd, the Minneapolis man who died in May 2020 while in police custody. Floyd’s death, and those of other Black Americans, have inspired protests all over the U.S. in the past month. Demonstrations throughout the Gorge have remained peaceful while drawing as many as 700 people.

“We plan to rally here a bit and decide if we can safely go anywhere else, because of the posse that is here,” said organizer Rosie Strange of The Dalles on July 2.

“Let us speak on that road to our community,” Strange told the BLM group on July 2 as they gathered on the highway. “But do not engage with any of those people who may want you do do violence. We are non-violent,” she said. Signs include “Say Their Names,” “All Mothers were summoned when George Floyd called out for his Mama,” and “Declare War on White Supremacy.”

Two people who stood across the road, holding a Second Amendment flag, said, “Everyone should be treated equal. We’re all Americans and we should be treated the same.” Both the man and his female companion asked their names not be published. The flag read, “The Right to Bear Arms — Free Men.”

The couple said they had multiple reasons for coming out to personally respond at the July 2 event.

“We’re supporting friends in the movement to ix-nay (Oregon Gov.) Kate Brown and people are supposed to be showing up and we’re not really for rioting,” the man said. “Peaceful protests are great, everything looks great so far,” the man said.

Both said they protested the fact that BLM events are being held while other public events are canceled or banned. He pointed to a Facebook posting inviting people to the July 4 BLM event in downtown The Dalles.

"We hear, ‘Don’t take your family to the fireworks, we’ve got cornonavirus going on,’ and then this ad. That’s mixed messages to the max. This is saying come watch our fireworks in The Dalles, and it’s over and over.”

One Klickitat County resident, who gave only his first name as Dave, said he questioned that "there’s all these counter-protesters and who are your sheriff’s people sitting with?” The counter protesters, and to me that goes very clearly to bias.

Sheriff Bob Songer and Undersheriff Mike Kallio could not be reached for comment. Law enforcement held a high profile in town; A uniformed officer stood watch at the Activity Center driveway, where the BLM group met before moving to the highway side. Jake Woods’ owner Debbie Carse said, “Everything was quiet,” adding that she did not speak with deputies or others gathered at her shop July 2 because she was busy working.

Counter protesters who did come and stand directly across from the BLM group included Sue Fleming of Dallesport, who said she opposes BLM for what she believes are its violent origins; and The Dalles resident Kareem Patton, who is Black. Fleming got into a friendly conversation with Elyse Martin of Goldendale, who held a Black Lives Matter sign. Then Martin and Patton, holding an American flag, held a calm conversation, punctuated by car horns and motor noise. Themes included racial perceptions, white privilege, Black individualism, and slavery reparations.

“Saying from a victimhood standpoint, ‘The system is against us,’ and approaching us that way is not going to help,” Patton said. “Whether you blame the white system or Black people, we have to change that. You have to do things like build wealth, build black families, do things like that.”

Martin replied, “Yeah, but the white people have hundreds of years of head start on Black people. Inequality goes back so far.”

Patton: “I understand that, and there are things we can do to address that. One thing that I understand is that Black people building wealth in America is the Homestead Act ... take the land ... I think there’s a lot of federal land they can definitely find descendants of slaves and give that to them so they can build wealth, but just telling white people ‘You’re racist, give me money’ is not going to solve anything.”

Martin: “It’s important to recognize the inequality, it’s been done so long, to try to start remedying that. Obviously we can’t have an instant fix but we can make steps to work that way. To say ‘Black Lives Matter’ to me is just that, it’s moving — ”

“It’s the parents and where you were born and raised that have a lot of do with,” Patton interjected. “So yes, race can play a factor but people like to outweigh or say race is a big impact but it really isn’t in modern America. Black people get mad at me for saying this, but if there’s a place or a part or a county in America that’s actually oppressing Black folks from law enforcement or education or whatever, you have the option to leave. It’s not a fair choice — not an easy choice and not everyone, especially the poor, can just get up and leave, but guess what, you have a choice, to at least try to get out of that situation. Many places where Black people live around the world, they don’t have that choice to just up and leave.”

Patton said he advocates smaller government as a way to curb overreach by law enforcement. “There are too many laws to enforce, and it gives them more reason to interact with Black people and sometimes these things end up (violent),” he said.