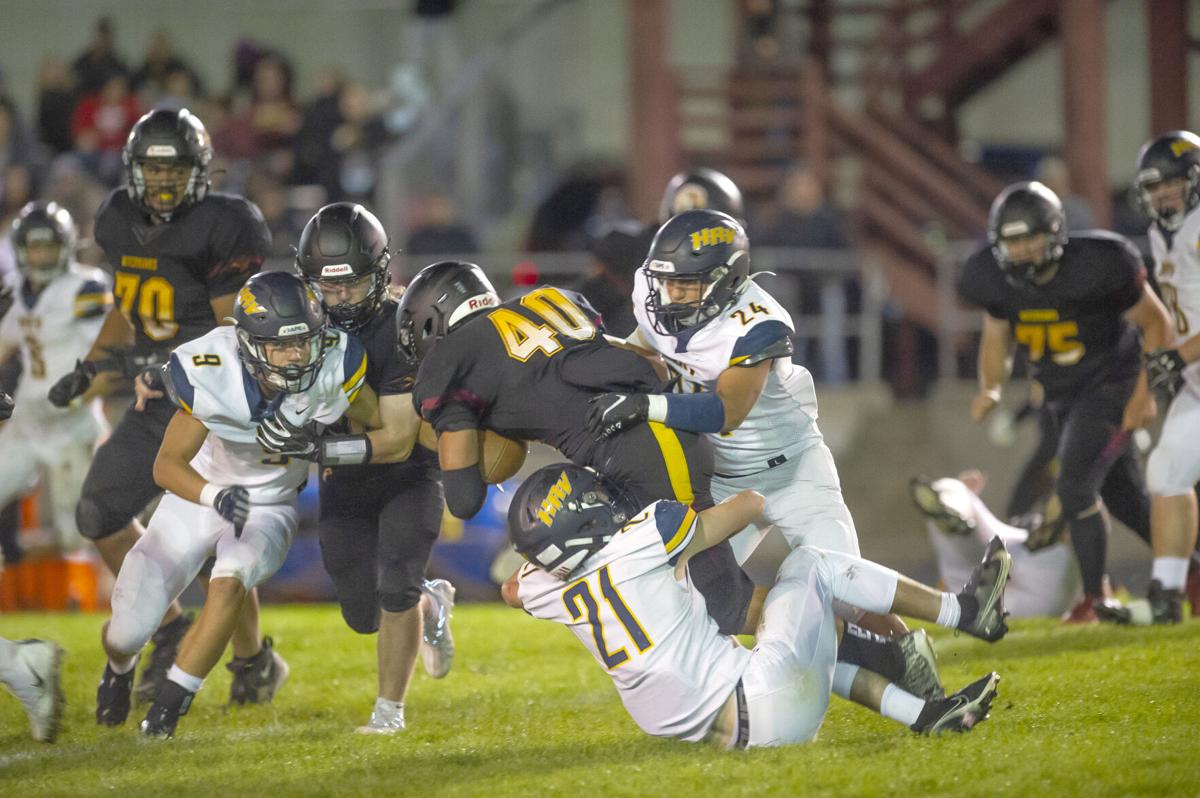 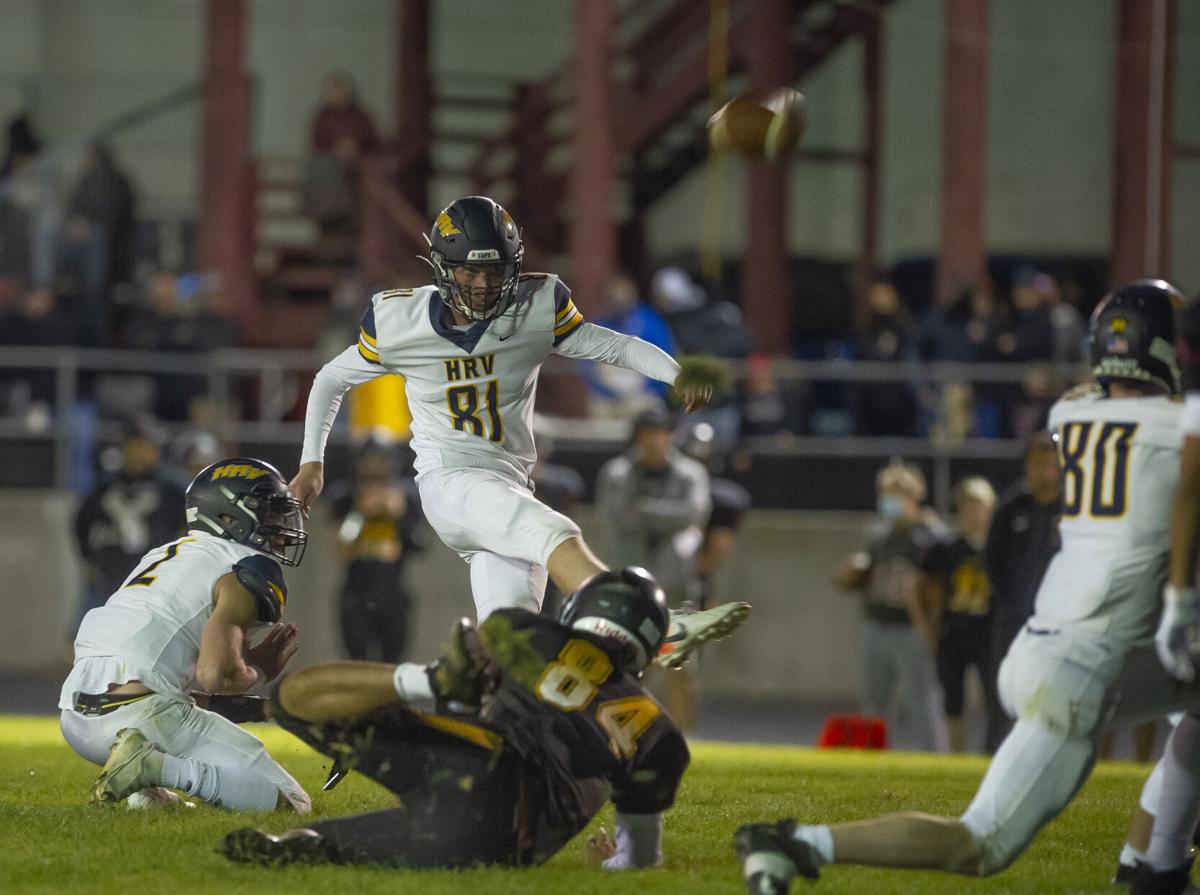 Hood River Valley senior kicker Robert Rowan (81) punches one between the goal posts for an extra point during a league game in The Dalles Friday, Oct.9, 2021.Mark B. Gibson photo 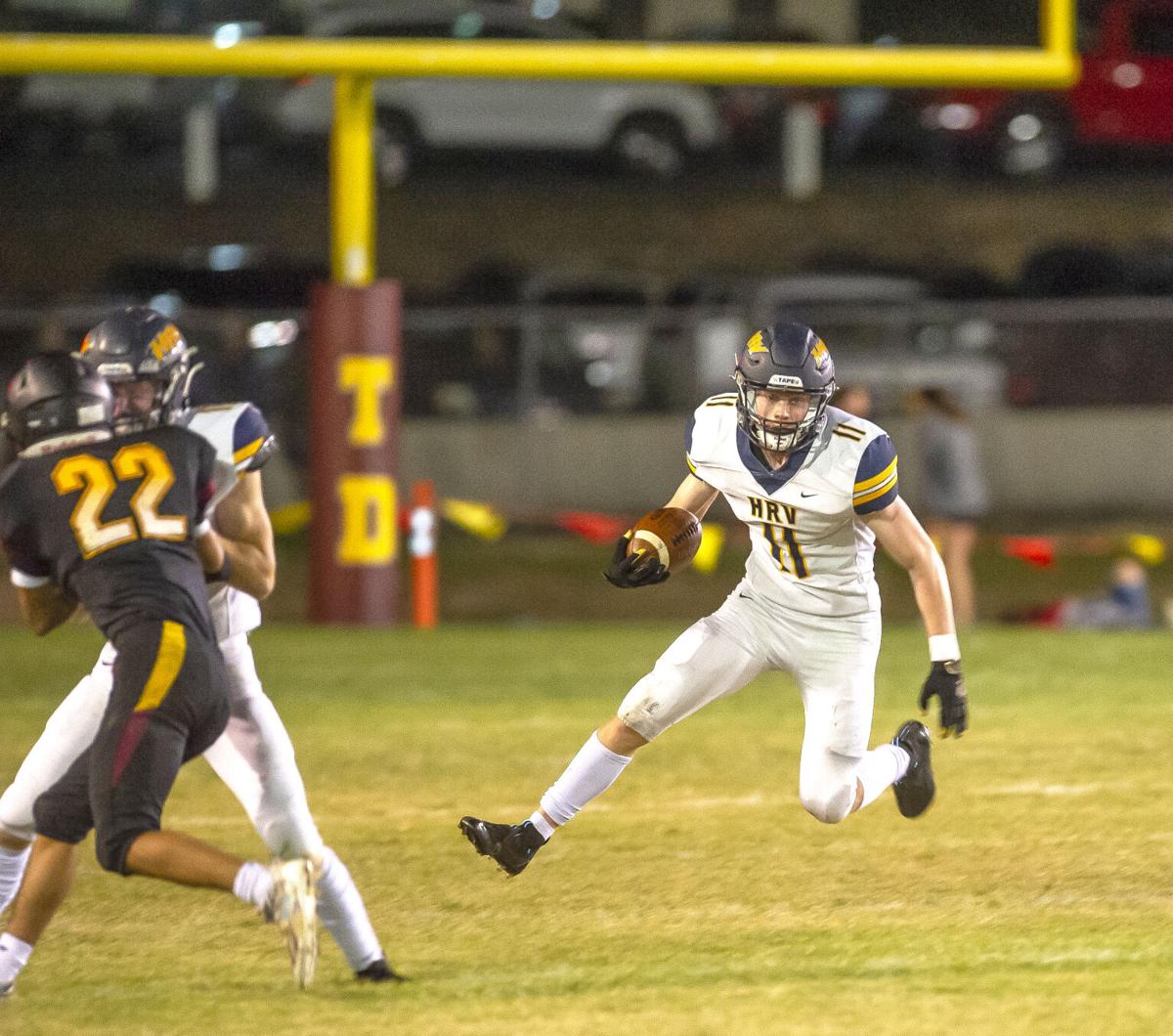 Hood River Valley senior Ryles Buckley running back weaves his way through and around The Dalles’ defense during a league game in The Dalles Friday, Oct.9, 2021.Mark B. Gibson photo

Hood River Valley senior kicker Robert Rowan (81) punches one between the goal posts for an extra point during a league game in The Dalles Friday, Oct.9, 2021.Mark B. Gibson photo

Hood River Valley senior Ryles Buckley running back weaves his way through and around The Dalles’ defense during a league game in The Dalles Friday, Oct.9, 2021.Mark B. Gibson photo

Utilizing their highly explosive fifth-ranked offense (38 points per game average), the No. 3 ranked Eagles (3-1 SD1, 5-1 overall) beat the Riverhawks 54-6 Friday at Sid White Field at the Wahtonka campus in The Dalles. It marked HRV’s sixth consecutive win over The Dalles, which hasn’t won in the series since a 28-20 victory in 2013.

The Dalles (1-3 SD1, 1-4 overall) had a good start in Friday’s contest, but the Hawk momentum was short-lived. The Hawks, guided by Coach Lynn Helyer, took the opening kickoff from Hood River senior placekicker Robert Rowan and were at midfield for their first offensive possession. A potential scoring drive stalled deep in Eagle territory, when the Hawks turned the ball over to Hood River on downs at the Eagle 11-yard line after a failed fourth-down conversion attempt.

“We were off to a good start and if we had scored and put it in the end zone, then it would’ve been a different game,” said Helyer. “They (Eagles) are No. 3 in the state, and they have some very good athletes. We played them tough in the first half and we were right there with them. We just broke down on a few things here and there and we played them pretty tough. We fought hard and we had some good offensive possessions in the first half. We were running the ball well, but we just couldn’t capitalize on our opportunities.”

On the Eagle’s first offensive play from scrimmage, junior running back Shaw Burns (seven carries, 142 yards rushing, two TDs) scored on an 89-yard touchdown run and Rowan’s point after touchdown put HRV up 7-0 with 8:54 left in the first quarter.

“It was awesome to see how we came out and just played our hearts out; we’ve put in a lot of hard work for many weeks, and it shows in our performance,” said Burns. “It feels great to get the win and we’re having an awesome season so far. We’re all playing great and hopefully we’ll be able to host a playoff game this year. I think we have a good chance of making a good playoff run this year. I know a lot of guys on their team (Riverhawks) because we’ve been playing with them since we were in third grade, so it feels good to come out here and beat The Dalles.”

The Eagles, guided by Coach Caleb Sperry, continued their momentum throughout the contest and they recorded a season-high in points scored.

“The Dalles had that big first series where they executed very well and got down near the goal line, but our kids played tough defense and we got the ball back and then we scored on our first offensive play,” said Sperry. “It was nice to see the way we battled through the early adversity and then come out on top. If you want to be a very good team, you have to show up and play like a good team and that’s what we did. There’s still some things that we need to clean up to shrink that potential gap.”

On the Riverhawks’ ensuing possession, senior defensive back/running Ryles Buckley intercepted a pass thrown by The Dalles junior quarterback Riley Brock. Buckley returned pick 60 yards for a touchdown and Rowan’s PAT put Hood River up 14-0 with 5:41 left in the quarter.

Hood River again capitalized on another The Dalles miscue early in the second quarter. The Dalles fumbled an attempted punt after going three downs and out and HRV took over control on offense at the Hawks’ 27-yard line. A three-play Eagle scoring drive was capped by a three-yard TD run up the middle, which was followed by Rowan’s PAT, making it 21-0 with 10:00 left in the second quarter.

On their next possession the Eagles scored again on a six-play, 85-yard drive, capped by Buckley’s seven-yard TD scramble to put HRV up 27-0 with 5:34 left until halftime. Buckley had 69 yards in receiving and 29 yards rushing and scored two TDs.

Following Hood River’s kickoff, The Dalles had another costly turnover on its ensuing possession. The Hawks fumbled and the Eagles recovered the ball at The Dalles four-yard line. Eagle senior quarterback Trenton Hughes (8-for-12 passing, 144 yards, two TDs) scored on the next play on a run up the middle and Rowan’s PAT made it 34-0 with 4:22 on the scoreboard clock.

“We’ve had some pretty competitive games against The Dalles other years, but I sure love how this one turned out,” said Hughes, who had six carries for 52 yards rushing and a TD. “We’ve had our ups and downs this year with fumbles, offsides and interceptions, but all that stuff is things that we need to clean up before the playoffs. We’ve put in a lot of hard work to get this far. We’re looking forward to the upcoming weeks and we just have to continue working hard.

“We’re hoping to have a deep playoff run. We have a pretty special team with lots of seniors (14) and I think we can go all the way to the championship game.”

After an exchange of possessions, an Eagle three-play drive was capped by a Hughes 24-yard TD pass to senior wide receiver Mason Spellecy in the left corner of the end zone and the PAT made it 41-0 with 56 seconds in the first half.

“Of course you always want to win, but The Dalles has good coaches and good players,” said Sperry. “Prior to the game, I would’ve never guessed that the score was going to be 54-6. I thought that they (The Dalles) would battle us hard, which is what they did at certain moments during the game. We just took care of business though. We tried to get our starters out as soon as we could and give our younger players an opportunity to have more playing time and it was nice that we were able to do that.”

With the lopsided score, the continuous running clock rule was used in the second half and most of Hood River’s starters didn’t play in the third and fourth quarters. The Eagles took the second-half kickoff from the Hawks and scored on their first possession of the third quarter when Hughes threw a 27-yard TD pass to Buckley to help extend the margin to 48-0. The Eagles scored again late in the third on a 16-yard TD run by sophomore running back Ethan Rivera, making it 54-0.

“I think for the most part, we played a very clean game, so I’m proud of our team for doing that,” said Sperry, who is hoping to lead HRV to the playoffs for the first time since 2015. “Right now, it looks like we’ll make the playoffs, but we still have some games to get through and we’ll take this one game at a time. We haven’t made it yet, but we’re in a good position right now. We just have to win a couple more games and hope to get some help from some other people, but we’re in a pretty good spot.”

The Hawks scored in the fourth quarter to avoid a shutout. A nine-play, 68-yard drive was capped by a four-yard TD run by junior running back Marquies Sagapolutele.

“We’re facing teams with a lot more senior leadership than we have, so we’re fighting an uphill battle, but our young guys are coming through and fighting hard,” said Helyer. “We were happy to erase the goose egg on the scoreboard, but we would’ve felt better if we would’ve had an opportunity to do even more. It was an emotional game for us, and we got whooped pretty good. I’m glad that the boys had some fire in them and seeing them fight back near the end to get a touchdown meant a lot to them.”