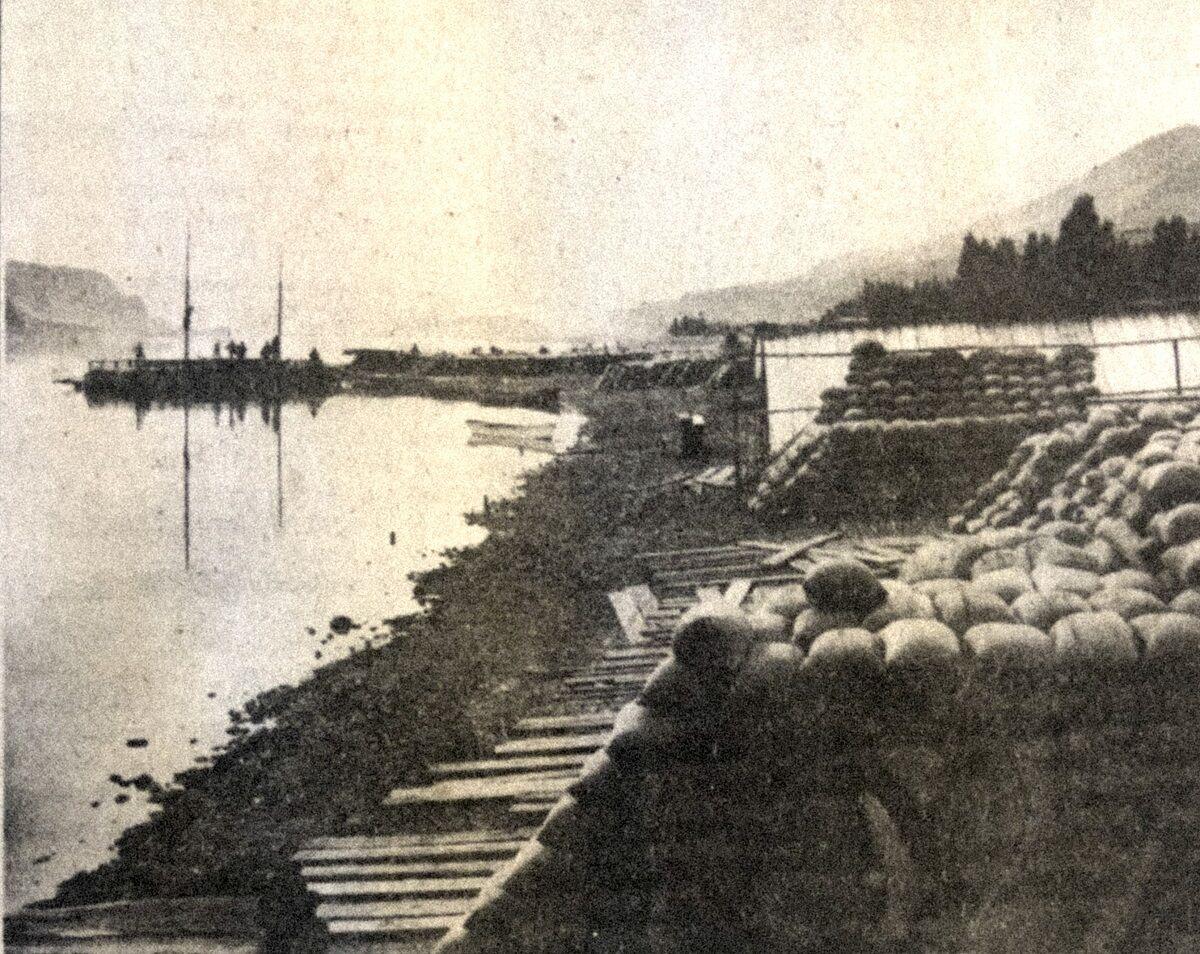 Wheat At Maryhill, 1890: This picture was printed above the caption: “One of the scores of pictures submitted for the first annual historical photo album published by The Chronicle today is this one from 1890 showing wheat at the dock at Maryhill. It is owned by Lew Nichols, The Dalles.” 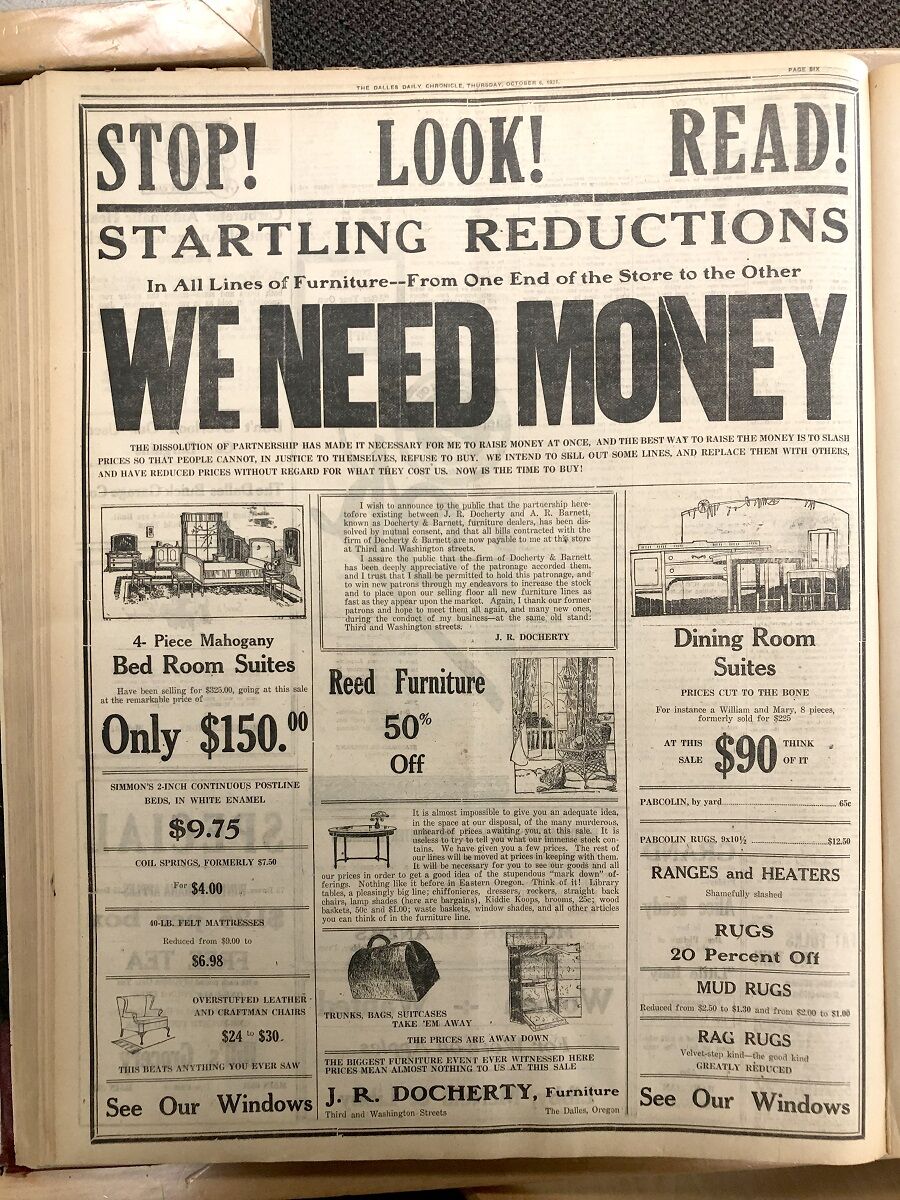 An ad from the 1921 The Dalles Daily Chronicle. 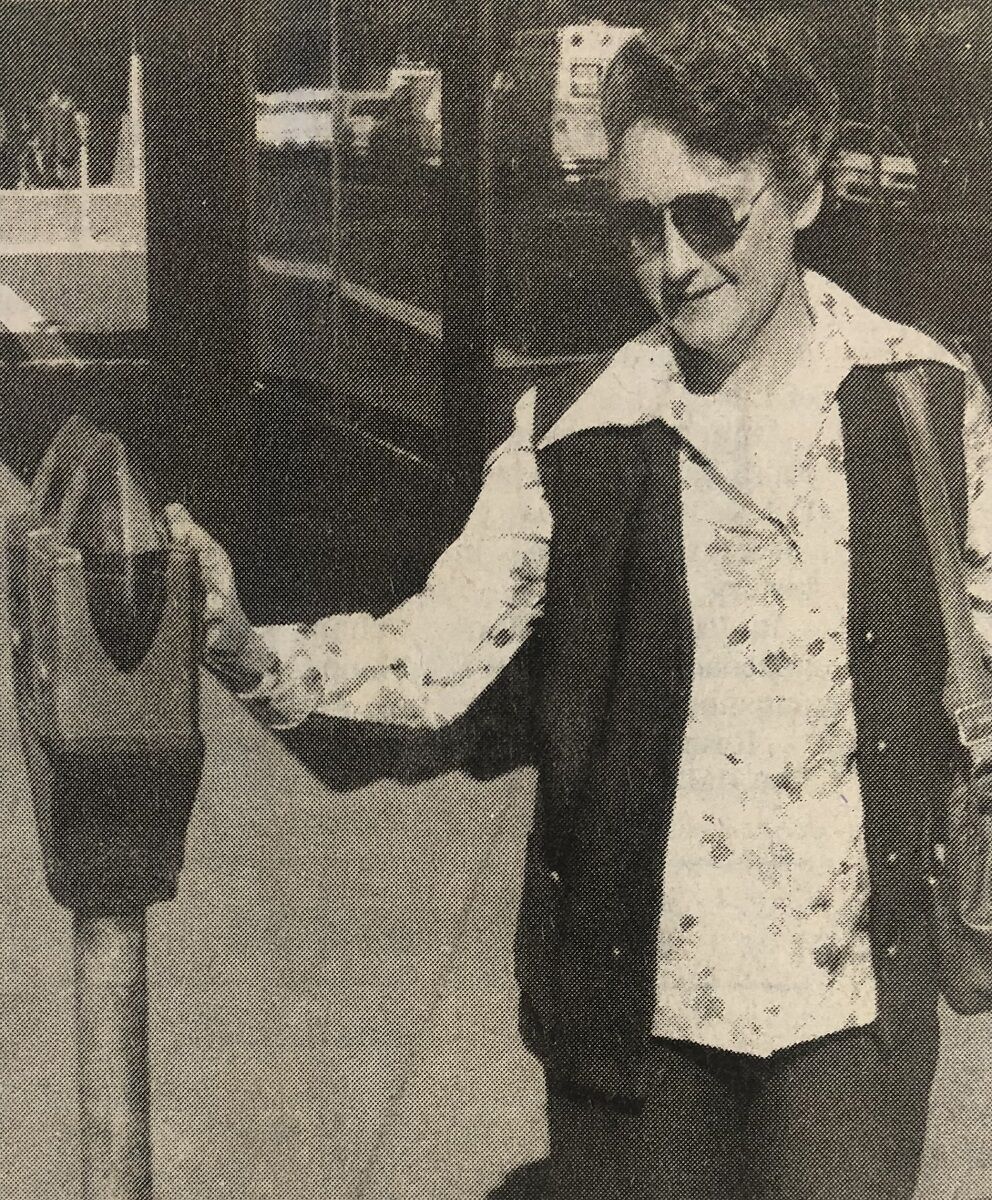 Fran Duvall of The Dalles and other drivers may get a reprieve from paying parking meters if a recommendation from a citizens committee today is approved by the city council. Plan would suspend use of meters three months in a study to determine long-term effect of removing meters. 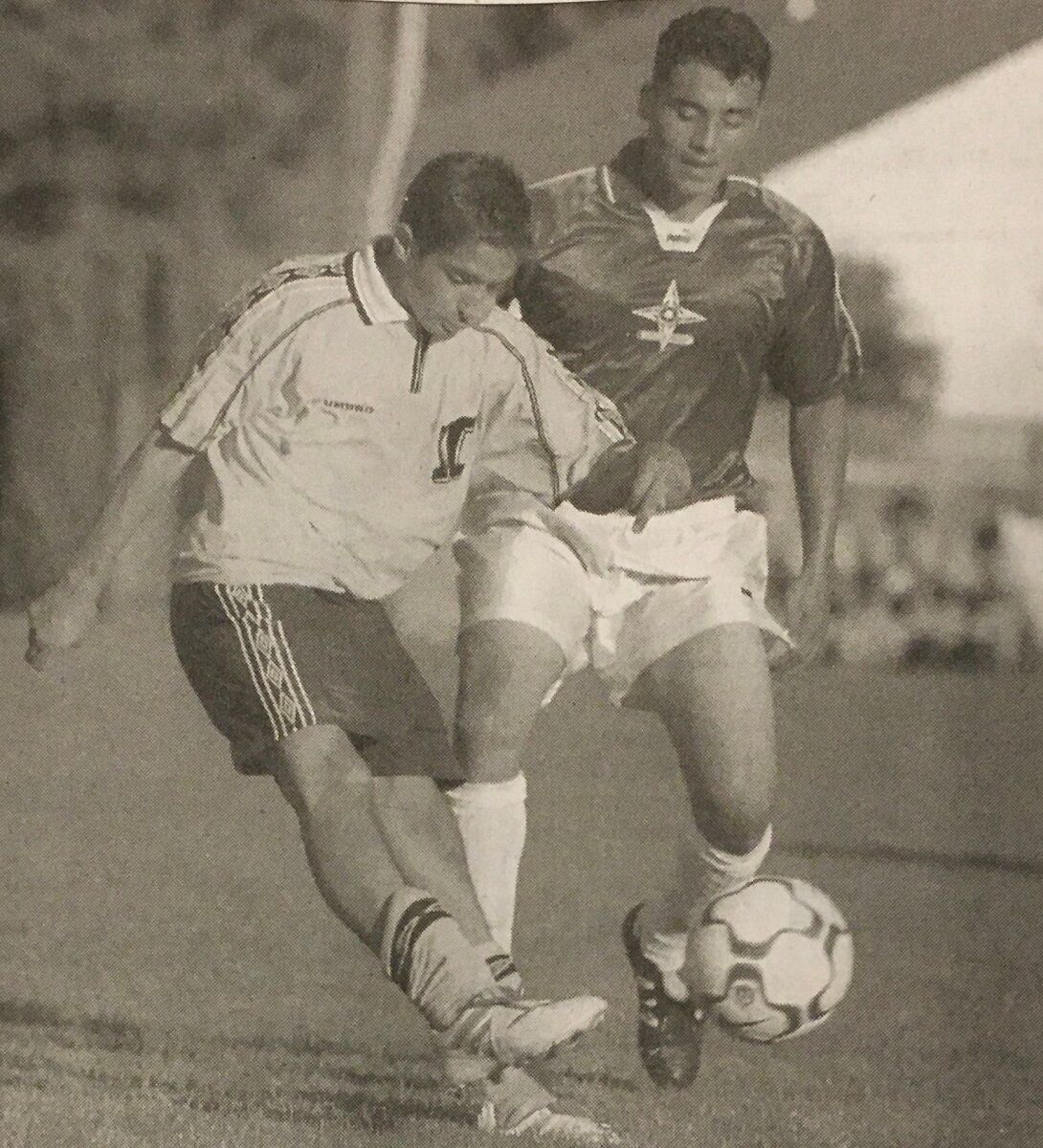 Matt Dallman has been a big reason why the Eagles have begun the season 8-0. The team takes its 2-0 conference record to Barlow Monday and David Douglas on Wednesday. Jim Semlor photo

That Hood River County’s greatest need today is a modern hospital, available alike for both rich and poor, was the consensus of opinion of the large attendance of the Lunch Club Tuesday. The decision came as the result of a request of Hugh G. Ball, chairman of the day, that each member submit in writing what he considered the greatest need of this community. Many worthy proposals were submitted and will no doubt be read with interest by those concerned. It was decided by the great majority of those present that the subject of a community hospital should be taken up for discussion. — Hood River News

Saturday night will be a big night for members of the United Artisans in The Dalles. A class of 50 candidates has been assembled and will the Artisan road Saturday night. The drill team of Liberty Assembly of Portland will be on hand to see that the candidates are properly led. — The Dalles Daily Chronicle

Mostly in jest was the suggestion made by C.E. Nesbit, West Side fruitgrower, to his blind neighbor, Herman Smith, that as a result of the shortage of help, he might have to call on him to help harvest the apple crop. But, to Nesbit’s surprise, Smith and his wife adopted the suggestion and played their part in harvesting their neighbor’s crop. In three days, Mr. and Mrs. Smith picked more than 200 boxes of apples. But the outstanding feature was this totally blind man of 50 years picking fruit by touch from the top of a 10-foot ladder, declares Nesbit. — Hood River News

The North Central Education conference of the Oregon State Teachers’ Association opened this morning at the civic auditorium with about 250 teachers in attendance. The highlight of the morning meeting was the address given by Dr. Frederick M. Hunter, chancellor of the Oregon system of education, on “Can America Produce an Antidote for Nazism?” — The Dalles Daily Chronicle

Teenage males who have completed the full Oregon high school driver education program — both class-room and behind the wheel instruction — have about 17 percent fewer violation convictions than their untrained counterparts. Girls with the full program have about 28 percent fewer violations than those with no training. These were among major conclusions announced today by Gov. Mark Hatfield as the result of a state conducted study of the driving records of more than 15,000 Oregon teenagers licensed for the first time in 1959. — Hood River News

Unemployment declined slightly during September in the four-county area served by The Dalles office of Oregon Employment Service but remained considerably higher than it was a year earlier. — The Dalles Daily Chronicle

With time running out on the present county landfill, the Hood River Board of Commissioners cleared the way for a new privately owned and operated transfer station and recycling center Monday. Hood River Garbage Service, already franchised to handle solid waste transfer, has made an offer on a 3.37 acre site … located on light industrial property south of Hood River off Tucker Road on land commonly referred to as the Guignard substation. — Hood River News

In despair there arises hope and success. That was the message from Judson Baptist College administrators, students and staff who held an appreciation dinner for residents of The Dalles Friday night. Tracing the move from Portland amid great feelings of hope, David King, chairman of the board of trustees, related a story ... that is, interim financing fell through forcing the distress sale of the Portland campus. That coupled with rising prices put Judson in a bind ... and Judson followers and support from the people of The Dalles saw Judson through a hard time. — The Dalles Daily Chronicle

Wind power will soon return to Goodnoe Hills in eastern Klickitat County, according to Mary Lord, energy resource specialist for the Klickitat County Public Utility District. The three giant Boeing MOD-2 wind turbines were shut down in June after the rotor on unit one “ran away,” exceeding the maximum operating speed and damaging the unit’s 2.5 megawatt generator. — White Salmon Enterprise

The start of the United States military campaign against global terrorism has led many Hood River leaders to take a watchdog role on the home front. Hood River County Health Department and law enforcement believe it is unlikely that the rural county will be targeted by either bioterrorism or retaliatory strikes. However, they are being extra vigilant about any unusual occurrences. — Hood River News

Ron McDermid, a Wasco area farmer, was named the interim justice of the peace for Sherman County on Sept. 5. He replaced Kate Martin, who announced her resignation in August. She was in the midst of a judicial disciplinary action for her participation in an illegal pyramid scheme in 1999. — The Dalles Chronicle

This year the Lyle High School has enrolled six exchanged students: Sabrina Bohme, Peter Kaiser, Vinccent Warrink, Saul Hernandez, Sanelma Lisalo, and Johanna Lee. When asked about why they decided to travel to the U.S., many of them had the same answers, although they are from diverse parts of the world. Their top reasons are to improve their English, make new friends, and experience our culture. Now that they have arrived they find several things really interesting. For instance, the amount of money we spend, they number of cars we drive, and the fact that most people own their own home. — White Salmon Enterprise

Several Orchards Are Robbed by Driver of Outside Truck

Apple thieves were active here last weekend, a truck, driven by a stranger, being the medium by which a number of boxes of high-grade apples were removed from orchards to an unknown destination. Two of the ranches robbed were those of W.T. Price and G.K. Johnson. Mrs. Price believed she saw the man who loaded the boxes of apples from the orchard to the truck, but although the sheriff was notified and a number of deputies sent out to scour the highways, no trace of him was found, it being believed that he did not leave the valley.

The practice of leaving filled boxes of apples out in the orchards after they are picked has been responsible in past years for a number of thefts and growers would be well advised to haul their apples into the apple houses instead of leaving them overnight. It is believed that the apples stolen are taken to Portland and disposed of there. — Oct. 7, 1921, Hood River News

Less than two short days prior to the scheduled start of classes, an explosion of terrific intensity rocked the new Dalles high school building here this morning, extensively damaging at least three rooms in the structure, shattering 19 windows on the front of the building and sending one man to hospital with severe burns about the head, arms and body.

So tremendous was the blast, occurring at 8:30 a.m., that glass from the windows was blown far across E. 10th Street, venetian blinds and moulding were ripped to shreds, and portions of acousticeltex ceiling in several of the rooms were torn from their moorings and collapsed on the floor.

Cause of the explosion was not determined at noon today, but it was believed to have been due to a leaky gas main.

The explosion apparently originated in the English room on the main floor, where the force of the concussion blew out practically all of the windows and laid a partition, separating the English room form the social studies room, over on it’s side.

Fire immediately followed the blast, scorching about 30 desks and chairs in the English room. — Oct. 6, 1941,The Dalles Daily Chronicle

Nellie’s Master Succumbs To Dope Administered On Eve Of Fair

Successor To King Purchased And Fair Goes Merrily On

The king is dead.

Nellie’s Master, the pedigreed $500 bull who was to have reigned supreme at the stock show of this year’s Wasco county fair died yesterday evening shortly after 6 o’clock, following a short and mysterious illness, casting a shadow of gloom over the entire fair ground.

After an examination yesterday evening by a veterinary surgeon, it was announced that the animal had been poisoned, although by what means is not know. The stomach, heart and lungs of the bull were today sent to Portland for a more thorough examination.

Pending announcement of what is found in this examination, the police are working on the theory that the animal was poisoned by some person bearing malice toward the fair of some member of the fair board.

Chances will be given on a bull as originally planned however. A motor truck was dispatched to Prineville last night to bring down the brother of Nellie’s Master, who will reign in place of the dead monarch, and be disposed of at the end of the fair by lot to the person holding the lucky admission ticket number. Red Rose, a half-sister to the dead bull, is still alive and in the best of spirits. The pedigreed heifer will be raffled off on the final day of the fair.

Watchmen have been employed with police power and armed with big revolvers, to guard the stock during the remainder of the fair. — Oct. 6, 1921, The Dalles Daily Chronicle

Forest Fires Rage All Over California