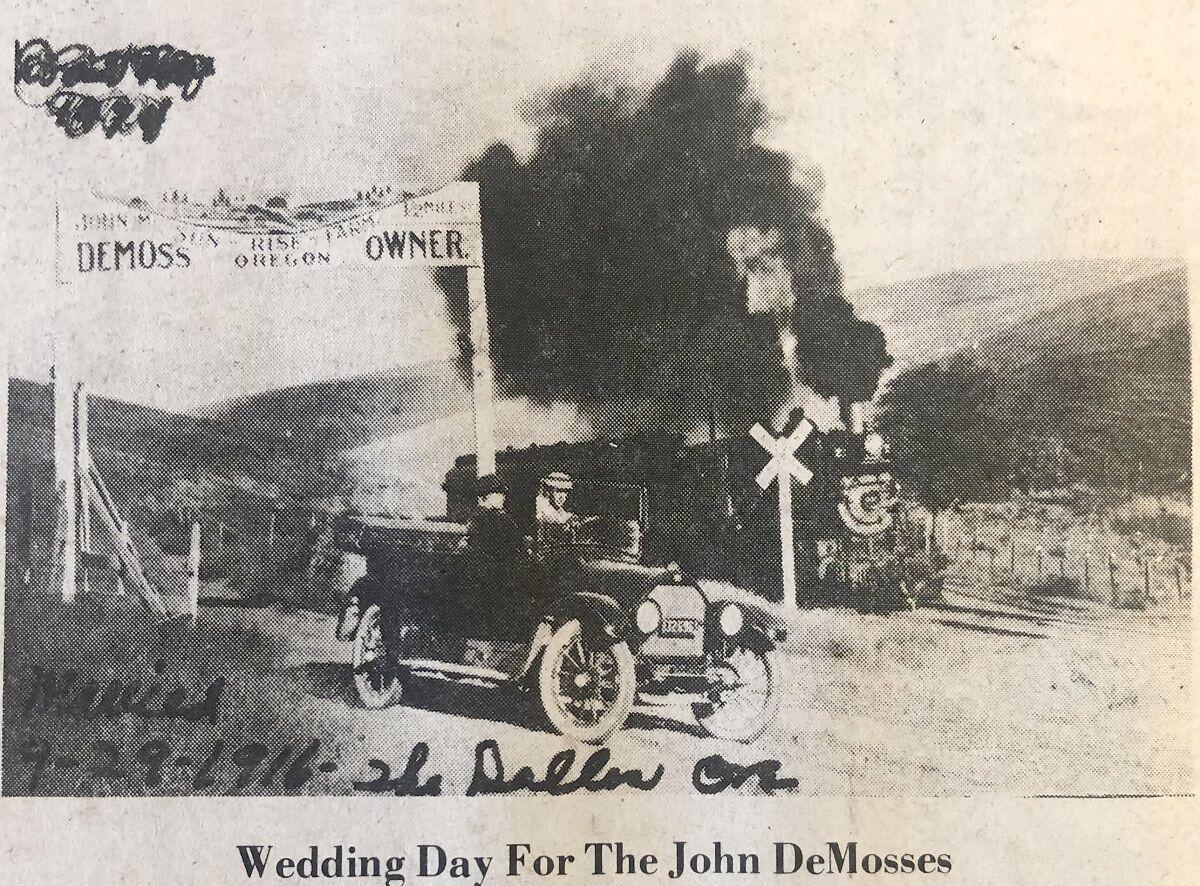 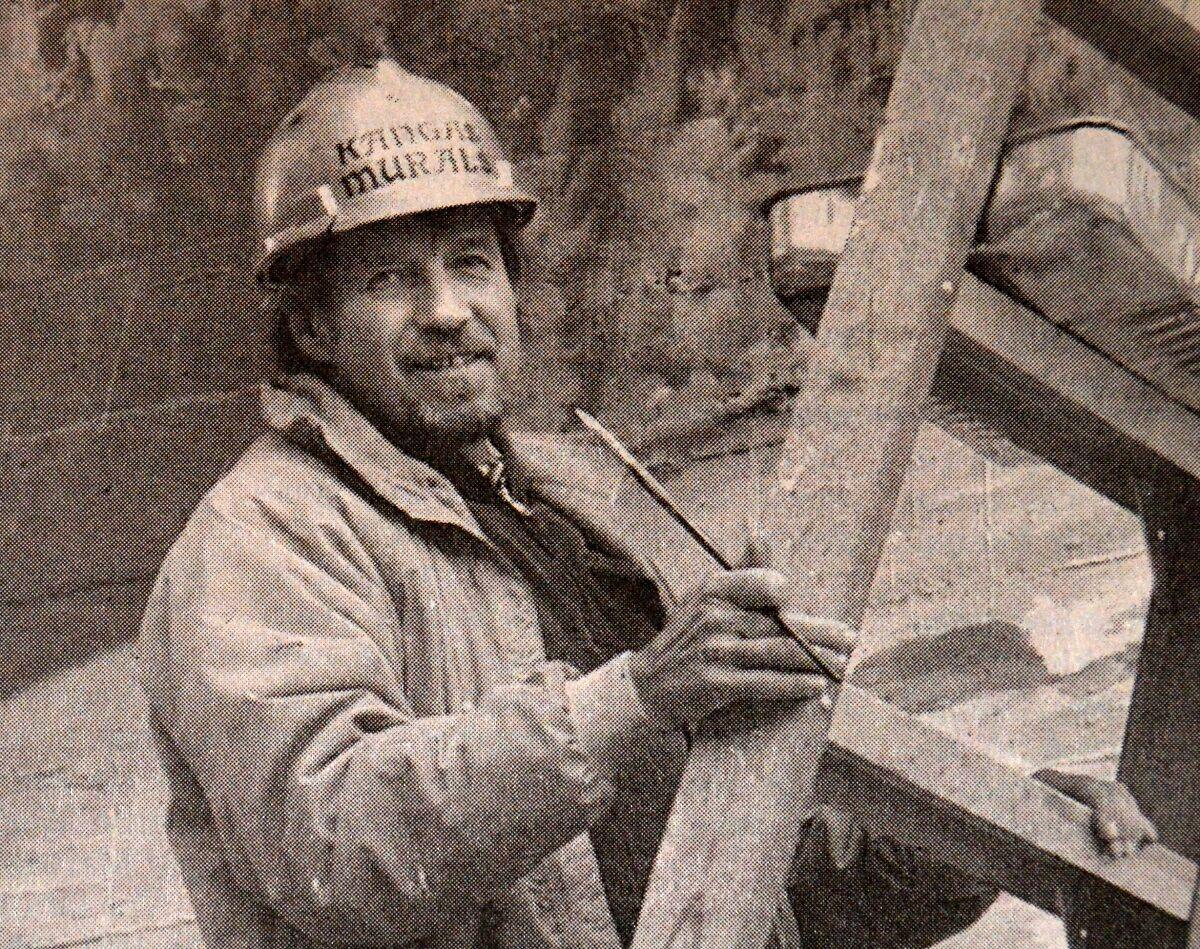 Artist Larry Kangas put the final brush strokes this week on a giant canvas in Cascade Locks. The painter has spent more than 80 hours designing and crating a colorful mural that is emblazoned across an abutment to the Bridge of the Gods at the west of town. 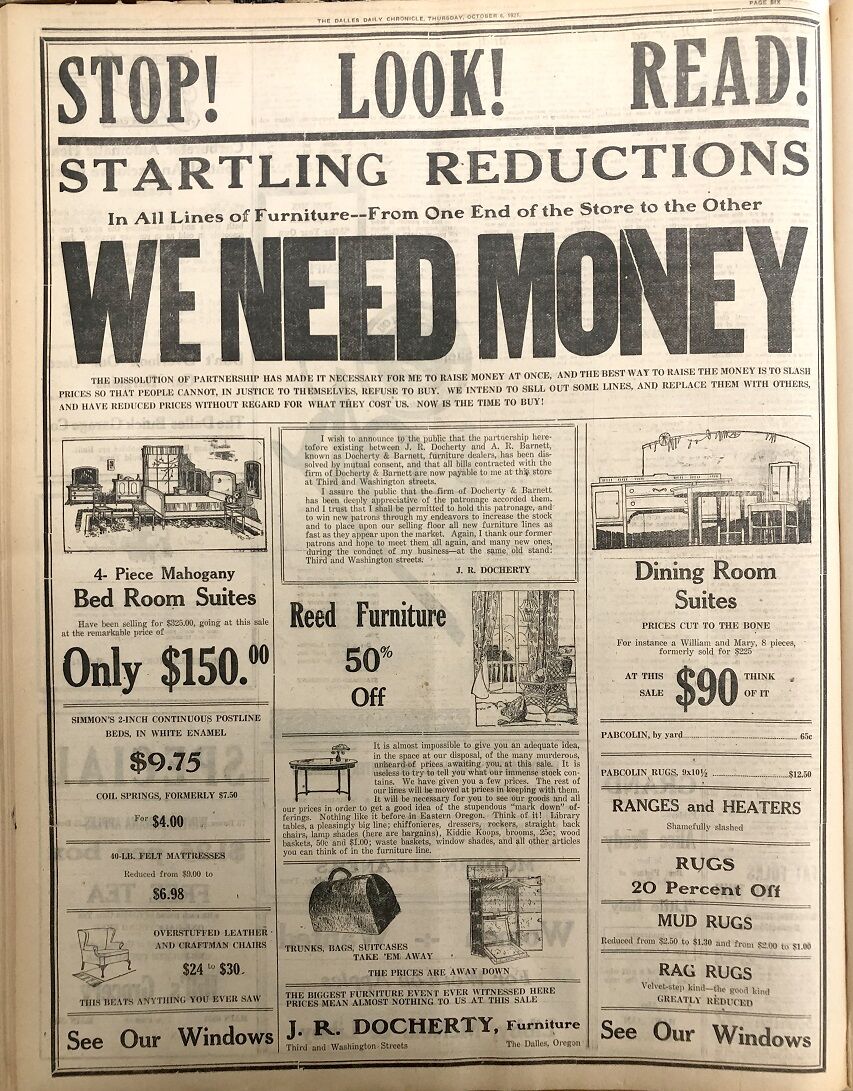 The State Highway Commission has instructed the engineer to prepare to advertise for bids for grading the nine-mile section of the Mount Hood Loop Road from Booth Hill south to the Forest boundary, with the object of awarding the contract at the November meeting of the commission. The project, which will link up the Booth Hill project, on which work has already been started, with the six miles of road already graded in the forest section of the Loop Road. Incidentally it will provide winter’s work for a large number of local people, for a large amount of the initial work in this section will consist of slashing, which can be carried on practically all winter. — Hood River News

The assessed valuation of Wasco County property for 1921, as equalized by the county board of equalization, is $15,564,400 it was announced today by County Assessor James A. Davis, following a complete check of the assessment summary. This total is $614,605 in excess of the total assessed valuation for 1920. — The Dalles Daily Chronicle

According to latest plans, the first blackout to be attempted in Hood River County will go into effect from 10 till 10.15 (sic) p.m. on Oct. 31, Hallowe’en, and all residents are urged to cooperate in the effort to make the blackout total during the period specified. At 10 p.m., all lights are to be switched off in all homes and other buildings. Because all street lighting is to be switched off, motorists are expected to pull into the curb and shut off motors and extinguish car lights during the period and it is urged that all respond to the request to make this blackout as nearly identical with those under actual war conditions as possible. — Hood River News

Individual members of The Dalles football squad today are making plans that their name shall be the first to be inscribed by on the Henry Cramer memorial trophy, which was accepted between halves of last Friday’s Dalles-Hood River game by Principal Harry Cloninger of behalf of The Dalles high school student body. — The Dalles Daily Chronicle

Big game hunters can line up their gun sights this weekend, Oct. 28, on what many hunters feel to be the most challenging trophy animal on the North American content. The date marks the opening of the general elk season scheduled to run through Nov. 15 in the Cascades, coastal and northeastern Oregon mountains, while hunters try their luck for elk of either sex in the southeastern elk ranges. Nimrods hunting in areas where bull elk only are legal game are urged to use caution around herds of elk to prevent accidental shooting of cows and calves. — Hood River News

Along with other indicators of Indian summer’s end, there was snow on the Klickitat hills across the Columbia River from The Dalles today. — The Dalles Daily Chronicle

The last day in the life of the Hood River County sanitary landfill arrives Saturday at 6 p.m., Tony Klein, public works director, reminded this week. After that time, for about two weeks, there won’t be any place in Hood River County where people who take care of their own solid waste disposal can take their garbage. Those who are customers of Hood River Garbage Service will notice no difference. Eventually, plans call for a permanent transfer station on light industrial property at the Guignard site off Tucker Road. — Hood River News

The Port of Klickitat is calling for bids this week on an 8,000 square-foot building at Dallesport to house Energy Foundation’s proposed alcohol plant. Bids are scheduled to be opened at the port commission’s regular meeting next week. Bill Hemmingway, port manager, said the decision on awarding a bid will be made as soon as possible after the opening to allow the building to be finished by the end of the year. “Energy Foundation will probably be setting up their equipment before the building is completed,” Hemingway said. “They’re shooting very hard to be in operation by Dec. 31 to take advantage of tax breaks.” The project is part of the port’s continuing effort to make use of an Economic Development Administration grant before the agency is completely phased out.—White Salmon Enterprise

All eyes were skyward this morning as hundreds of children watched an airplane circle near Cascade Square and then drop Santa Claus and four of his helpers by parachute onto a ball field. Santa was surrounded as he rode a deputy sheriff’s car to his temporary home in the shopping center. — The Dalles Daily Chronicle

Hood River County Planning Department has received a request for a pre-application conference with the developers of a proposed 185,000 square foot building to be located at the southeast corner of Country Club and Frankton roads. Customarily, an application for a commercial use in a commercial zone is handled by county planning staff with a minimum of public involvement. However, due to the potential impact of the project and public interest demonstrated to date, the planning director has opted to require a public hearing before the Planning Commission. — Hood River News

White Salmon’s Skyline Hospital is one of many hospitals across the state of Washington that are dealing with a shortage of nurses and other key medical personnel. The problem is severe enough that the Washington State Hospital Association has released a 74-page report entitled “Who Will Care For You?” which spotlights the problem and describes ways medical facilities might be able to correct it. Mike Madden, administrator of Skyline Hospital said the impact of the nursing shortage is widespread. “It’s affecting everybody,” Madden said. “We’ve always got a couple vacancies. It’s overworking our current staff a bit. No question there’s a shortage — in the Northwest, anyway.” —White Salmon Enterprise

Pearl is back home. Pearl, a 13-week-old American Bulldog stolen from her owners’ yard Oct. 17, was returned Wednesday night the same way she left — by someone reaching over the fence. — The Dalles Chronicle

One Sip from Bottle Costs Easterly $50 and Costs

If excessive cost will force men to observe the prohibition law, Guy Easterly probably swore off booze on Monday morning, when in Justice Onthank’s court, he was fined $50 and costs for having a pint of liquor in his possession on Saturday night, when he was arrested by Night Marshal Webster. He tried to persuade the court that he heard two strangers tell where the bottle was cached on a step and went to find whether their story was true. He found the liquor and was sampling it when the police arrested him. He was warned that a repetition of the offense will mean the imposition of a jail sentence. — Oct. 28, 1921, Hood River News

Moonshine Flows In City Jail, But It Goes Into Drainage Basin

Moonshine whiskey flowed freely in the city jail this morning, as members of the city council, Mayor P.J. Stadelman, the police and city hall employees watched 20 gallons of the fiery liquid trickle into a drainage basin.

Patrolmen McClaskey and Crofton performed the ceremonies, which consisted of removing corks from gallon demijohns and quart bottles and pouring the contents into the basin.

The liquor was seized Monday by police, when they arrested Tony Malfo and Jim Malloy, and found the whiskey in the tonneau of a car in which they were riding.

A horse opera enacted on downtown Second Street wound up yesterday with a rider dehorsed, jailed and facing a disorderly conduct charge.

Persons on the streets late Thursday afternoon had the somewhat startling experience of seeing a horse and rider on the sidewalk. The man, 58, from Sherman County, was trying to ride into some of the doorways, police said, in a fashion that would match that of a TV Western hero.

Police called on modern mechanized equipment to meet the problem. They said the man wouldn’t get off the horse but was finally “herded” down to the lot of the old St. Mary’s Academy.

Police forced him off the horse, Officer J.E. Robertson took him to the police station and Officer Marvin Robertson took the animal to Red’s riding academy on W. Sixth Street, driving the patrol car with one hand and leading the horse with the other.

The man pleaded guilty to the disorderly conduct charge and was scheduled to appear for Recorder’s Court trial Saturday. — Oct. 20, 1961, The Dalles Daily Chronicle

Badge Of Office Deflects Missile Which Would Probably Have Killed Executive; Robert Sanders Shot Through Hip; Oriental Is Third Victim.

Chief of Police Frank Heater was shot twice and two other men, one a Chinese, were shot and seriously wounded in a battle between the police and a band of tong-war mad Chinese occurring along First street between Court and Union, and along Court between First and Second about 11o’clock last night.

The fight, which lasted intermittently over a period of almost half an hour, according to the statement of the police and various Chinese, was the result of a case of mistaken identity.

The Chinese were unable to explain to the mayor why they had so many weapons at hand, ready for instant use, save to say that they were for protection against hostile tongmen.

Stadelman and Chrisman returned to the Black and White corner, where the crowd was still congregated, and advised the men to disperse to their homes.

Stories told by the police and the Chinese differ in regard to the way the affair started.

The battle began, the participants declare, when a Chinese lookout, posted to guard his fellows from the invasion of hostile tong gunmen, mistook four officers for a crowd of highbinders who had come to shoot up the local Chinatown.

Frank Heater’s escape from death last night was little short of miraculous. The bullet struck his star which was pinned on his vest just over his heart almost squarely in the center. The missile pierced the star and went almost through, but its base mushroomed and the metal of the star crumpled around it. The point of the bullet went through the chest wall, apparently just entering the inner cavity. Another inch and it would have struck his heart. He would undoubtedly have been instantly killed had it not been for the star, the attending physicians said. — Oct. 20, 1921, The Dalles Daily Chronicle

Union Leaders May Be Jailed By Government

No More Chrome For Automobiles