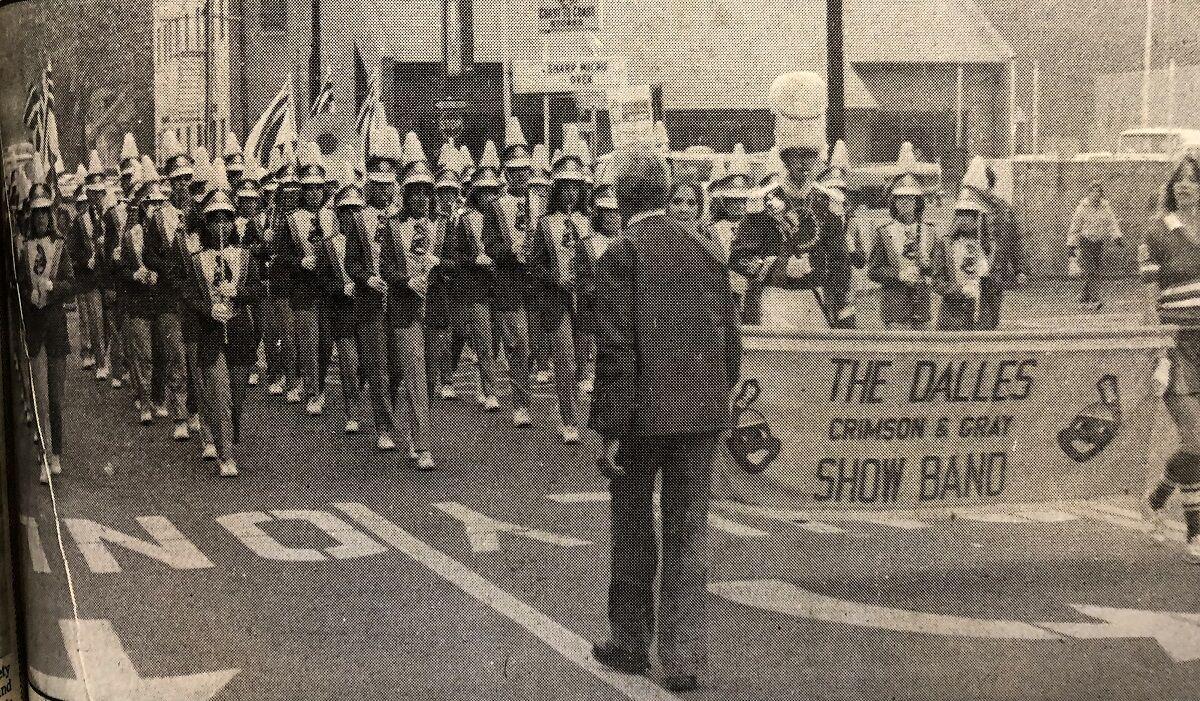 The Dalles Crimson & Gray Show Band makes a practice run through downtown The Dalles in preparation for Veterans Day parade. 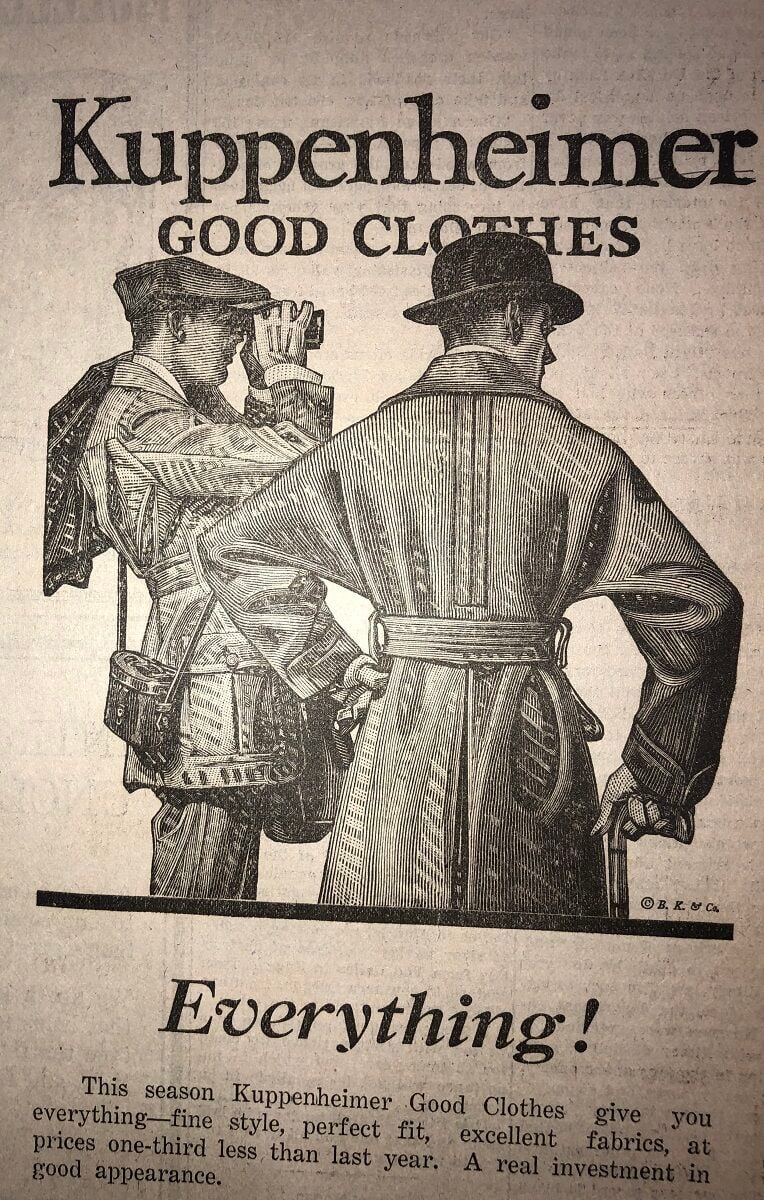 Coats advertised in the 1920s The Dalles Daily Chronicle. 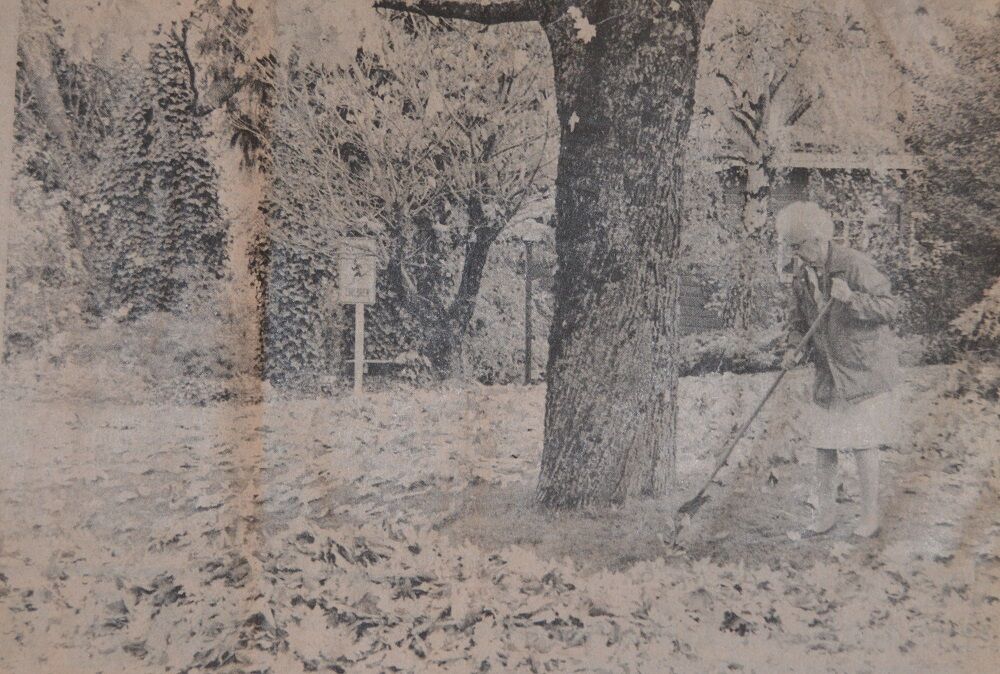 Raking Season — Hazel McQuary, above, brought out her rake Tuesday morning to continue a chore she has undertaken every fall for the past 35 years — gathering the leaves in her yard on Fourth Street. The public works street department will begin leaf pickup from curbs in Hood River Monday. 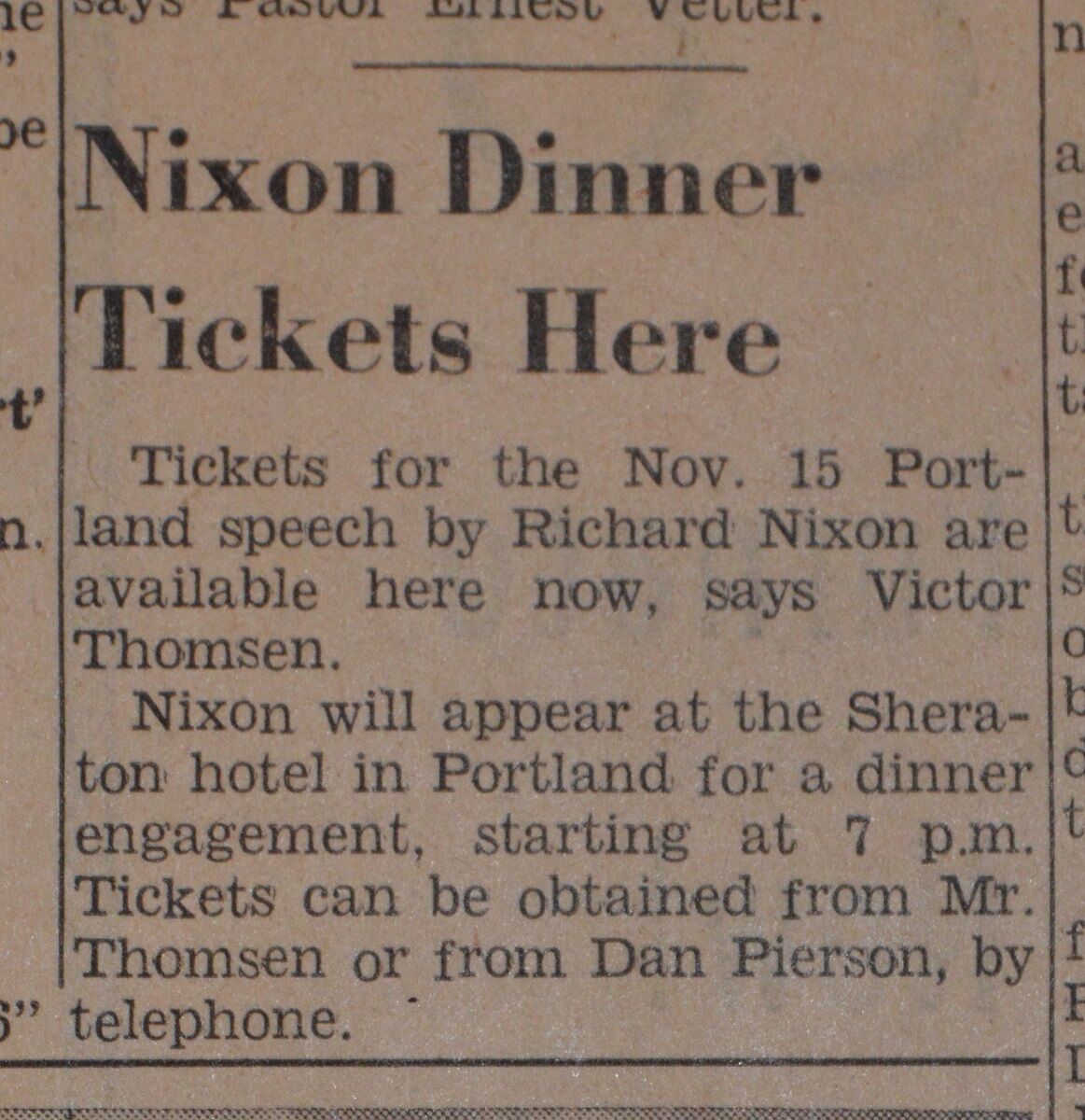 Item in the Nov. 2, 1961, Hood River News announces tickets to a visit by then Vice President Richard Nixon in Portland.

A magnificent gift towards a community hospital for Hood River County was announced on Wednesday, when E.O. Blanchar, of the First National Bank, reported that Miss A. Spring, well known East Side orchardist, now of Colorado, has deeded to him in trust an 8-acre orchard tract on the East Side. According to the terms of the deed, the property, which should realize more than $5,000, is to be sold within a period of five years and the proceeds devoted to a community hospital. — Hood River News

The 1922 city budget will probably call for a total expenditure of about $67,000, including both discretionary and compulsory items, it was decided last night at a meeting of the city budget committee. This committee is made up of an equal number of private citizens and members of the city council. This total is within the six percent limitation, as prescribed by law. — The Dalles Daily Chronicle

About the only factors needed on Friday night of last week to make the blackout of this section of the Mid-Columbia compete were the visit of the promised “enemy” bombing planes and an extension of the blackout idea to the city of White Salmon. Foul weather in Portland forced the grounding of the “enemy” planes, and a fear of Hallowe’en excesses in the White Salmon area was too strong upon its city fathers, who decided to pass up an opportunity to join in the game of make believe with the neighboring towns of Bingen and White Salmon. In the towns of Cascade Locks, Bingen and Hood River, the blackout was as near complete as even the most ardent member of the Civil Defense committee could desire. — Hood River News

A flurry of petitions have greeted plans of the Port of Cascade Locks to buy the Bridge of the Gods for a reported $950,000, according to Cascade Locks Port Commissioner Karl Rosenback. With Commissioner Harry Cranblett, Rosenback voted against the idea when the port voted to pursue the purchase last month. A crucial meeting of the port, when they’ll vote on the issue of a revenue bond to finance the bridge purchase, will be held in Cascade Locks Monday, Nov. 9. Current owner of the bridge is A.C. Allyn Co., Spokane. — Hood River News

The heaviest rainfall The Dalles has experienced this fall was recorded here last night and this morning. According to figures released by Port of The Dalles, .38 of an inch was the precipitation, as compared to .08 for last Saturday and .02 for Sunday. It is reported that the heaviest downpour occurred about 4 o’clock this morning. — The Dalles Daily Chronicle

A proclamation by Gov. Mark Hatfield will end the 1961 fire season restrictions at midnight tonight, the North Central Oregon District of the State Board of Forestry reported today. — The Dalles Daily Chronicle

Facing an increased work load in the months ahead, the county took steps Monday to “beef up” its planning staff by approving a recommendation to hire two new persons. They are Wendy Ott and Susan Fast, both approved as assistant planners. The pre-planned staff addition anticipated a reworking for the county’s comprehensive plan which went before the state Land Conservation and Development Commission Friday. — Hood River News

A public hearing on petitions to incorporate a new town near Antelope in Wasco County is scheduled for 2 p.m. Wednesday at the Wasco County Circuit Courtroom. The applicants are followers of an Indian spiritual man whom they described in their literature as the world’s most controversial mystic. — The Dalles Daily Chronicle

The fall rains have started and officials from two government agencies are keeping a vigilant eye on the flood plain around Highway 35. The Oregon Department of Transportation and U.S. Forest Service are watching for excessively muddy waters in Newton Creek and the White River that will signal the movement of glacial sediment on the upper slopes of Mount Hood. In the fall of 2000, heavy rains sent more than 600,000 cubic yards of material coursing down Newton Creek and White River. That debris flow washed out a 20-foot span of roadway at the northern end of the White River Bridge and structurally undermined the Newton Creek Bridge and another 20-foot section of pavement in that vicinity. — Hood River News

Wasco County resident Richard Murray was awarded $222,000 this week in a circuit court decision involving land-use on his 20.5 acre parcel at Sevenmile Hill in The Dalles. — The Dalles Daily Chronicle

City officials from both Bingen and White Salmon are expressing concern about roal and soil excavation taking place in the hills overlooking the city of Bingen. However, owner of the property, Merlin Vezina, contends the complaints are misguided. Vezine explained that road work on the site is taking place simply to accommodate building a fence line for an adjacent property owner. White Salmon city officials are threatening to deny Vezina’s annexation application if he does not stop the work following a “procedural stop action” issuance. — White Salmon Enterprise

Bootlegging To Be Made Unprofitable

If heavy fines can make bootlegging unprofitable, Hood River will from now on earn a reputation as being one town in which this fraternity cannot afford to do business.

On Saturday evening, three young men, claiming Independence as their home town, were captured by local officers while in the act of peddling moonshine to minor youths of Hood River. They pleaded guilty and each was fined $250 and costs, which is about half the limit that the law allows. Justice Onthank committed them to jail until the fines are paid. It is stated that one of the men is under parole for bootlegging in a Willamette Valley town. Justice Onthank has now decided that, in the future, he will impose jail sentences on all found with booze in their possession. — Nov. 4, 1921, Hood River News

Robert Sanders, one of the victims of the Chinese tong flare-up which stirred The Dalles several weeks ago, was discharged from The Dalles hospital yesterday. Sanders still carries the bullet in his hip, which was the cause of his going to the hospital. The bullet lodged behind a bone in a position which made its extraction difficult, and in which it can remain without serious consequences.

Chief of Police Frank Heater is still in the hospital and will probably be there for some time. The bullet which entered his leg is said to have carried away some of the bone and weakened it.

Hoy On, the one Chinese injured in the shooting affair, is also in the hospital. He is reported to be well along the road to recovery, although he will be bedfast yet for many weeks. — Nov. 3, 1921, The Dalles Daily Chronicle

US Speeding Help For China

President Insists Democracy Will Not Fall in US’

Romanian Forces Now Out Of War