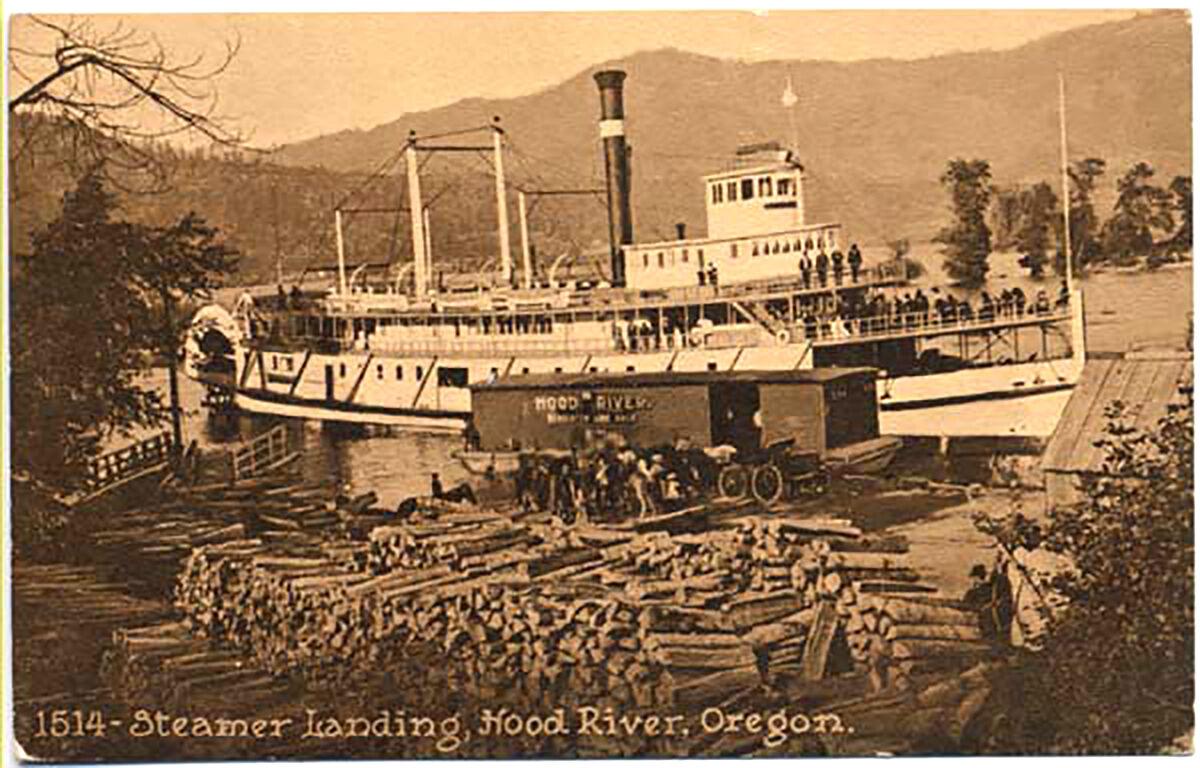 An undated postcard features a steamer landing in Hood River. If you have more information regarding the photo, or the steamer landing location, email Mark Gibson at markg@gorgenews.com. Include the word “history” in the subject line. 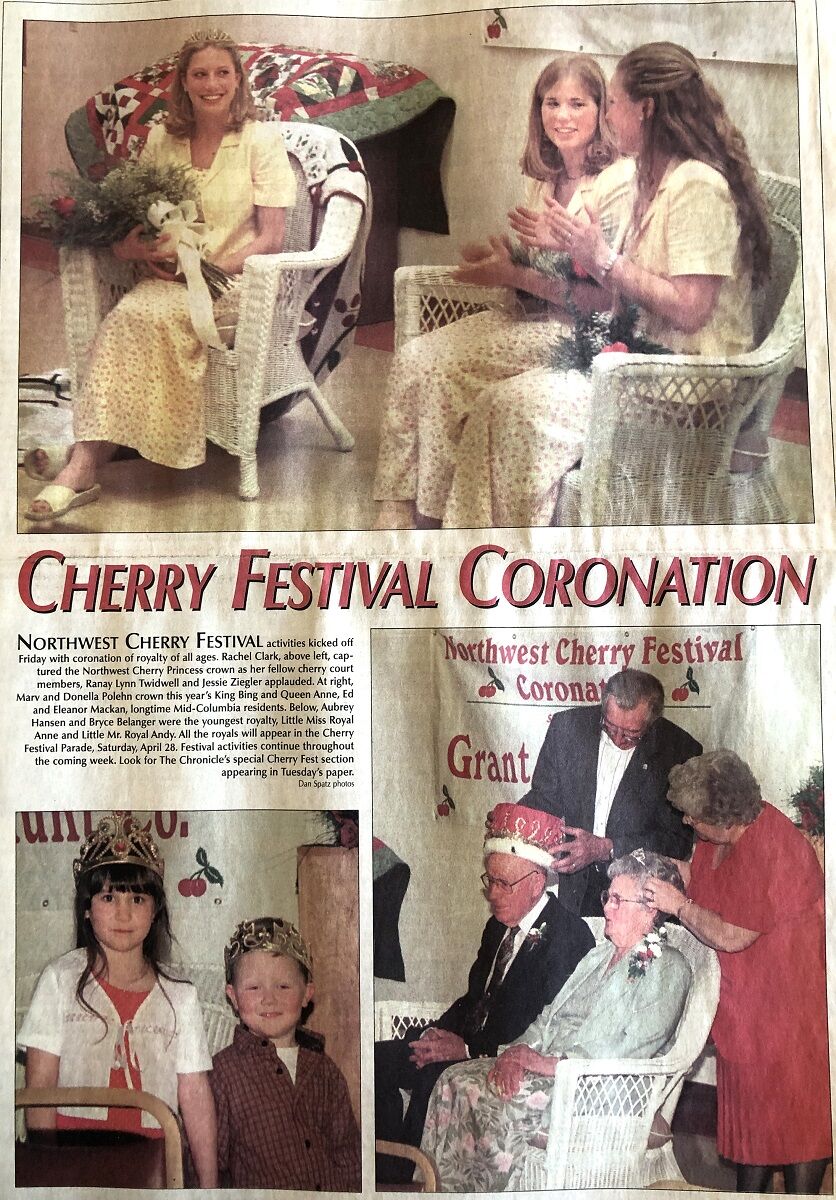 According to Simon Benson, who has been at home this week, there is every prospect of the Columbia Gorge Hotel being ready for business the early part of June. Work on the hotel has so far progressed that the respective crews can work without hampering each other, and progress is now at its maximum. It is stated that several of the rooms are now ready and the completed building will be ready to hand over well within the stipulated time. — Hood River News

With six Portland attorneys and virtually every legal light in The Dalles handling various angles of the case, hearing of the many water right claims on White River was today continued in the local circuit court room before George T. Cochran, representing the state water board. More than 200 farmers were interested spectators and witnesses today. — The Dalles Daily Chronicle

Several surveys made since the night of heavy frost the past week adds up to but one thing — loss in pears, cherries and strawberries is limited only to those areas which have long borne an unenviable reputation as unusually frosty. And even in these areas, the loss cannot yet be estimated correctly, for the reason that several other factors will have to be later considered before any accurate decision can be arrived at.

There was a definite loss in early strawberries in most of the zones visited, practically all centers of blossoms being black when the survey was made. — Hood River News

Hood River growers kept fingers crossed for the third frosty time this week as a curious snowfall that coated the upper and west valley slopes brought temperatures again plunging to the freezing point in many orchards. Oak Grove reported one inch of snow Tuesday morning, and snow lay that deep in the upper valley. Biggest fear for the rest of the week — clearing skies and calm winds that would allow frosting conditions on the areas already twice hit by frost this month. — Hood River News

Sites for a fish and wildlife management area, industrial developments and recreation are tentatively designed on a 25-mile stretch of the John Day Dam reservoir area, the Corps of Engineers reports. — The Dalles Daily Chronicle

Blossom Day this Sunday, April 26, is the culmination of a year-long effort by many Hood River organizations to give visitors and residents a look at the valley in full splendor. Mother Nature has cooperated during April by providing cooler temperatures, which have slowed bloom development on fruit trees in the valley. The snow-white pear blossoms will be in full bloom in the Parkdale area Sunday, when the majority of tourists drive the scenic loop up the valley.— Hood River News

Within about two weeks, a decision on new rules for parking meters in The Dalles is expected. Three studies have been made, each with a different approach. Recommendations include no meters Saturday and Sunday and tighter enforcement and a program to get people who work downtown not to park in front of stores. — The Dalles Daily Chronicle

After eight years as pastor of Bethel Congregational Church in White Salmon, Rev. Frederick Haag has made plans for his retirement, which will take him and his wife, Ina, to Walla Walla in the next few weeks. Sunday will be Haag’s last service as pastor here, and after that he said he will be spending the next few weeks getting ready to move. Then it will be retire “and go to work” he said, adding he has several possibilities of interim ministries, “so I won’t be just sitting around, I know that.”

The Haags will not be newcomers to Walla Walla, as he also served there. He also spent time preaching in Spokane, Chicago and Cedar Rapids, Iowa, totaling about 40 years in the ministry. The move will also put the Haags closer to their daughter who lives in Spokane. — White Salmon Enterprise

“There was lots to choose from. Everyone seemed to enjoy themselves.” That’s Clara Rice’s description of the 2001 Blossom Festival, held over the weekend throughout the Hood River Valley.

“It went pretty well. We seemed to have a good flow of crowd through both days,” said Rice, county fairgrounds manager, of the event-filled Blossom Craft Show in Odell. The fair had a record 99 vendors, though Rice said many commented they had “a lot of lookers and not as many buyers.”— Hood River News

It’s back to the negotiating table for members of the Oregon School Employees Association, Chapter 50 and The Dalles school district. Approximately 77 classified employees attended the membership meeting April 19, with a majority voting against the contract. — The Dalles Chronicle

“Battle of the Bands” open to kids from a tri-county region turned out to be a showcase of White Salmon talent. Although eight bands competed, the top three finishers all hailed from White Salmon. Leading the sweep was the band Luna Rise, who plays experimental folk, rock, and reggae. Members include Josh Benavides, Deb Benavides, Scott Head, and Jose Maya.

“That is the first competition we ever tried,” said drummer Maya. “We are very excited about this.” Luna Rise won the right to go to Viking Studios in Ridgefield and record a single. The recording session is expected to last two days. Mosaic took second place, playing a variety of “Space Rock” music — and includes band members includes Kevin Malella, Dustin Owen, Wes Trosper, and Casey Wagner.

Two 14-year-old Junior High School boys were scheduled for a hearing at 2 p.m. today following a widespread alarm they caused yesterday by the indiscriminate handling of dangerous explosives.

The two were lodged last night in the Wasco County jail and were to appear before County Judge James Hunt for a hearing this afternoon.

They are charged with intending to do injury to persons or property by explosives. Adults convicted of this charge would face a maximum penalty of 20 years in the state penitentiary. For minors, exact disposition is determined by the court.

If Judge Hunt decides they are guilty of the charge, he has the option of placing them on probation or transferring them to MacLaren School for Boys at Woodburn.

An alarm that caused the junior high school to evacuate and shut down for half a day yesterday originated when it was learned a full box of detonating caps and three sticks of dynamite had been taken from a construction truck and carried to the school.

Before investigation was complete, authorities discovered more dangerous explosive caps had been dropped in neighborhood trash containers and one had been wired in a department store radio.

From 11 a.m. until late afternoon yesterday city police and firemen were busy counting and recounting dynamite caps to determine how many were still at large.

This morning city police said it is likely all the caps have either been recovered or accounted for. There was a slight possibility, it was cautioned, that one cap is still missing.

Existence of the potential danger came to the attention of authorities Wednesday night. A man brought a dynamite cap to the main fire station with the explanation his son had given it to him, saying he’d gotten it at school. — April 21, 1961, The Dalles Daily Chronicle

Pupils and teacher of the Wapinitia school were thrown into a high state of excitement yesterday afternoon when a small, mild-mannered man appeared at the school and quietly informed one of the teachers that he “wanted a girl.”

He was not particular what kind of girl she was, he explained, saying that he felt the need of female companionship in his life. Refusal of his request did not seem to particularly disappoint him and he seated himself and awaited developments.

In the meantime, the teachers had got into communication with Deputy Sheriff Gus Reeder, who placed the strange man under arrest.

The man was brought to The Dalles this morning, where he was placed in the county jail. Telephonic communication with the state insane asylum revealed the fact that the man is wanted on there, having escaped his guards about a week ago. He is perfectly harmless, the asylum officials assured Sheriff Chrisman. — April 21, 1921, The Dalles Daily Chronicle

As outlined several weeks ago by the News, the city council has initiated an ordinance calling for extensive improvements in the street system of this city. Immediately the ordinance has run its legal course, calls for bids will be made and work pushed vigorously to a finish. The program, the heaviest of many years, covers the following streets:

Suspect In Bomb Outrage Is Mum

Stuck in traffic? Nearby school might be to blame

‘Weaving the River’ at Nichols