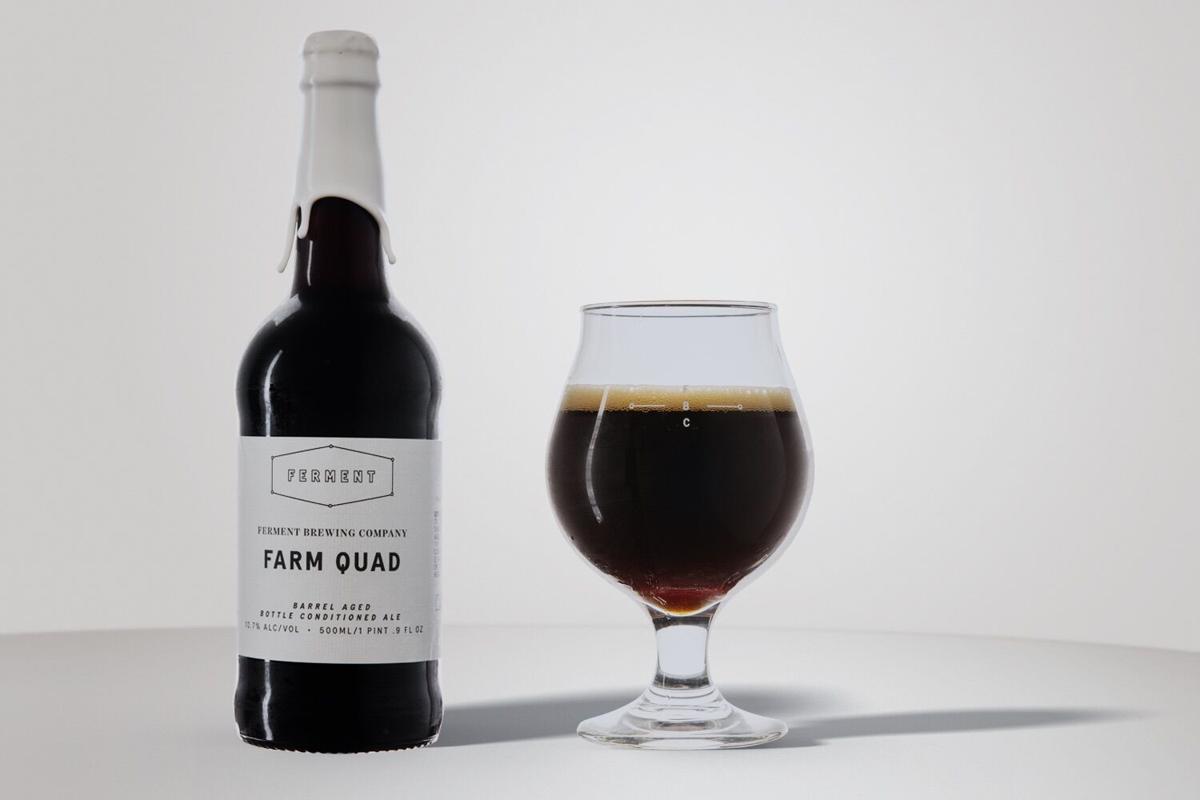 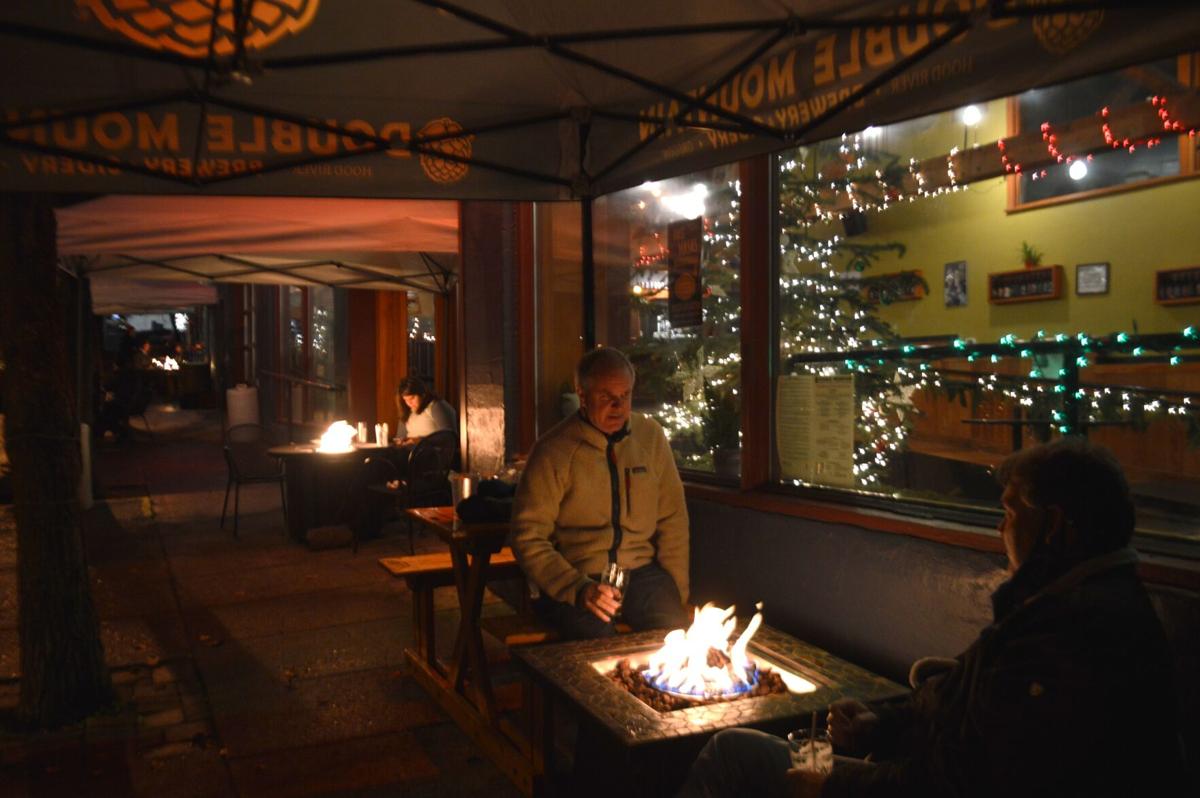 Bundle up and enjoy your beer: Covered gas-powered table fireplaces like these at Double Mountain (accompanied by indoor holiday decor) are more and more common.

Solera Brewery’s largest bottling effort — one cap at a time — set up a gentle powerhouse of a sour ale made by head brewer Jason Kahler.

Find First Tracks at Slopeswell Cidery on the Heights, Tuesday and Friday takeout times 5-7 p.m., soon at Boda’s Deli and River Daze Cafe, and at locations in The Dalles to be announced. McCullouch, formerly with Ferment, started brewing in October on a compact new Slovakian-made system, and will soon install his third fermentation tank. He brings the training for lagers he received in Germany to a tight selection of hand-crafted beers, which can be enjoyed along with the John Metta-directed ciders at Slopeswell.

Filling the window next to Slopeswell (the former HR Barre space) is the fun temporary brewery sign: “A brewery for the Heights!” done in crayon by Metta’s children.

Solera’s Peche ‘20 wild ale is also a neighborhood beer, made from fruit grown in Parkdale. And the bottles are sold only at the brewery. Solera capped 800 16-ounce bottles of the Peche and the Hi on Rye, named for its solid base of hibiscus.

Buying beer at the source, and consuming it there with friends, has always been the philosophy of Kahler, co-owner John Hitt and the rest of the team, but with no way to seat people indoors, the bottling of the 6.3 ABV peach sour is a survival-effort, stated Kahler.

In the barrel for a full year, Peche ‘20 is perhaps the perfect beer for the pandemic: Bold but quaffable, approachable but full of tart personality, it starts with a strong floral aroma suggesting fruit blossoms, leaving the peach essence to the palate, where it does not so much announce itself as slide into that seat in the middle of the table and join the conversation. The pucker factor is definite, but polite, and it’s perhaps rare among sour ales in that the flavor and mouthfeel transfer well across temperature. It’s definitely ideal cold, but the Peche holds up well even after the beer has sat at room temperature awhile. A small amount of sediment add character, so keep the bottle still for a day or so, and then pour carefully — or not, depending on your taste. It’s all good.

Said Kahler, “Our peaches were a blend of Doughnut, White Lady and Early Star, harvested one mile down the road from us at RNV.” (RNV stands for Reijker, Novalija, Veizen, the names of the orchardist’s children).

Hi on Rye, 4.7 ABV, Kahler describes as “a refreshing sour ale aged on organic whole hibiscus flowers. The hibiscus brings a tart tropical juice flavor and a brilliant red color. A generous amount of malted rye was incorporated into the mash resulting in a well-rounded mouth-feel.”

Next up: A 10th Anniversary beer for Apple Valley BBQ (right across the street, another neighborhood beer): Russian Imperial Smoked Stout aged on Bourbon oak, and a Belgian Abbey Ale.

Just tapped on Friday at the pub: A Winter IPA, 6.0, single-hop IPA utilizing “the wonderfully aromatic Mosaic hop, balanced with just enough Munich and crystal malts to carry the hops while adding a bit more body for this colder weather,” Kahler said, adding that there is always a rotating Double Mountain Cider tap flowing fresh at the pub:

Heating devices are installed on patios and sidewalks at Thunder Island Brewing in Cascade Locks and at Double Mountain Brewing and 64 Oz. taproom in downtown Hood River, Walking Man in Stevenson, Everybody’s Brewing in White Salmon, and Ferment Brewing in Hood River (see below). Other businesses that have fashioned some degree of outdoor seating include Crush Cider Cafe, 6th Street Bistro, Kickstand Cafe, and Naked Winery.

• Be advised: In all locations, the qualifier “limited number” applies.

• If you can, check online for beer availability so you’ll know what to order as soon as you arrive.

• Alert yourself to site-specific protocol — there’s usually a sign at each table indicating status of sanitation and readiness.

• As seating IS limited, enjoy your beer and convo but be mindful of others waiting — and be ready to give up your seat.

• Keep in mind that rules and protocols at individual locations are subject to differences between Oregon and Washington, and might change at any moment.

Stevenson’s Walking Man Brewery hosted a 20th anniversary collaboration with past and present brewers, reports Ezra Johnson-Greenough in a recent posting in the online The New School.

Suitably named Twenty Strides Imperial Pale Ale, Walking Man celebrated its first two decades by bringing together 11 past and present Walking Man brewers — including Tessa Longnecker, who took over as the head brewer on Dec. 1.

Johnson-Greenough notes that Walking Man first gained international and regional recognition in the independent craft beer scene when they won a gold medal for Walking Man IPA at the 2006 World Beer Cup. He writes, “With now over two decades under their belt they have produced over 100 unique recipes and cemented themselves as a popular destination along Washington’s Oregon border on the banks of the Columbia River.”

In lieu of an anniversary party, Walking Man celebrated throughout the month of November, starting with the anniversary beer release. Twenty Strides is a reimagined version of Walking Man’s first beer recipe, Pale Strider Pale Ale, only this time with 20 hop varieties, according to Johnson-Greenough. Participating breweries got a keg for their taprooms and the proceeds will benefit the Glen Hay Falconer Foundation’s brewer scholarship program.

With that line-up, it is clear that Walking Man comes close to rivaling the “brewery family tree” for which Full Sail has been hailed over the years.

To amplify the celebration, Walking Man held a beer trivia contest via social media and sold limited-edition collectible beer steins, each signed and numbered by Bob Craig. Visitors created a “Crowler Time Capsule” that will include $55 worth of merchandise for $20. The Time Capsules will be kept at the brewery until November 2021 when Walking Man plans a party.

54-40 in Washougal won golds, for Half Cocked in the American Strong Pale Ale category and its Kascadia Kolsch in the Kolsch category.

Ferment Brewing Company took silvers: 12° Pils in the Bohemian Pils category and its Pale ale in the English Pale Ale category, tied with Royal Scandal from Peticolas Brewing in Texas. Gold among English Pale Ale went to Special Pale Ale from Wellington Brewery in Ontario, Canada. Other Oregon and Washington breweries taking medals were Bend, Ecliptic, Stormbreaker and Three Creeks, with Deschutes of Bend at number one among top 10 breweries in the competition, and Reuben’s Brew Taproom of Seattle in sixth.

Historic swimsuit reveals challenges of past