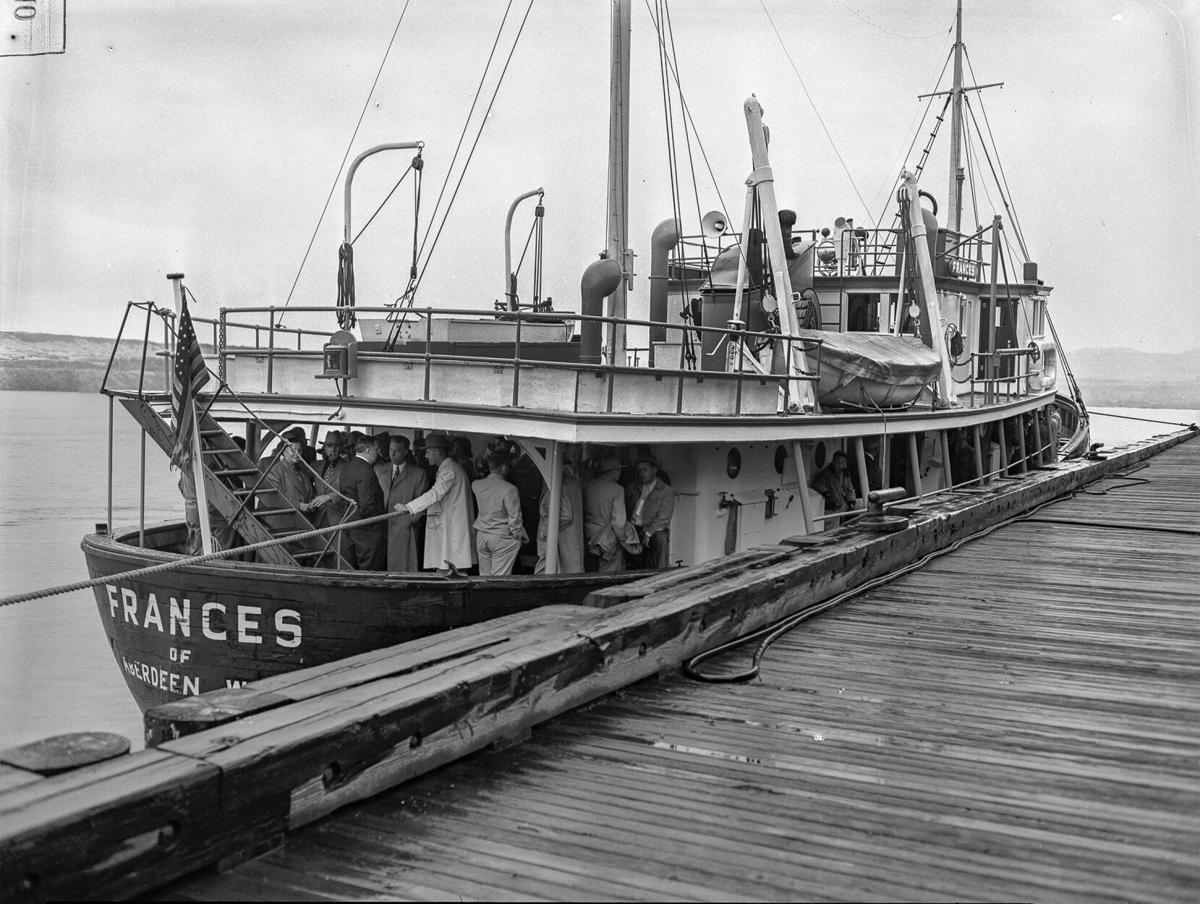 The Oregon Wheat Growers League hosts guests on the Frances of Aberdeen, Wash., while docked in The Dalles June 6, 1951, following the 4-H and FFA show and sale, and a youth banquet at The Dalles Civic Auditorium. Photograph by George Lindsay, The Dalles Optomist. 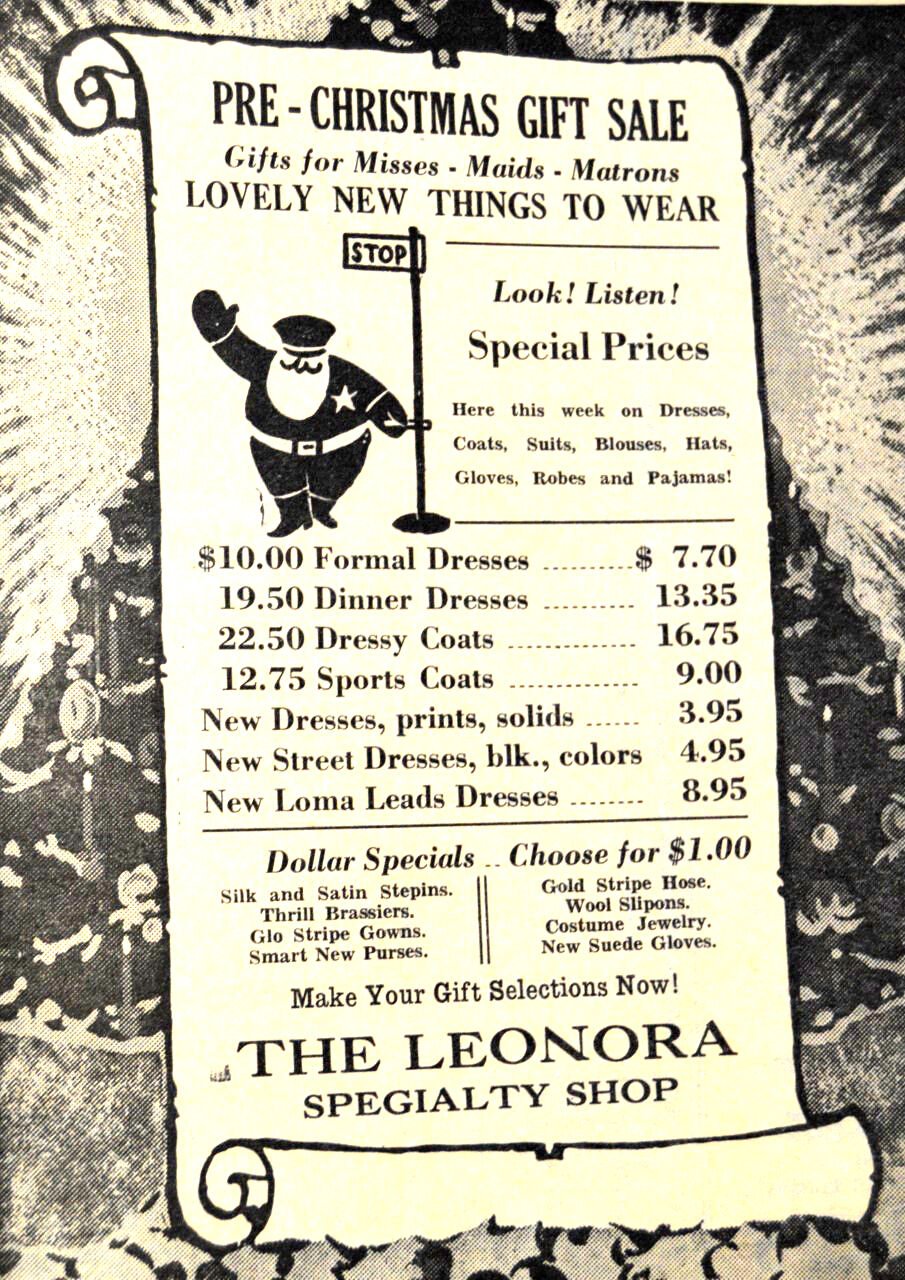 A pre-Christmas sale scheduled at The Leonora ‘Spegialty’ Shop in the Nov. 22, 1940, Hood River News. 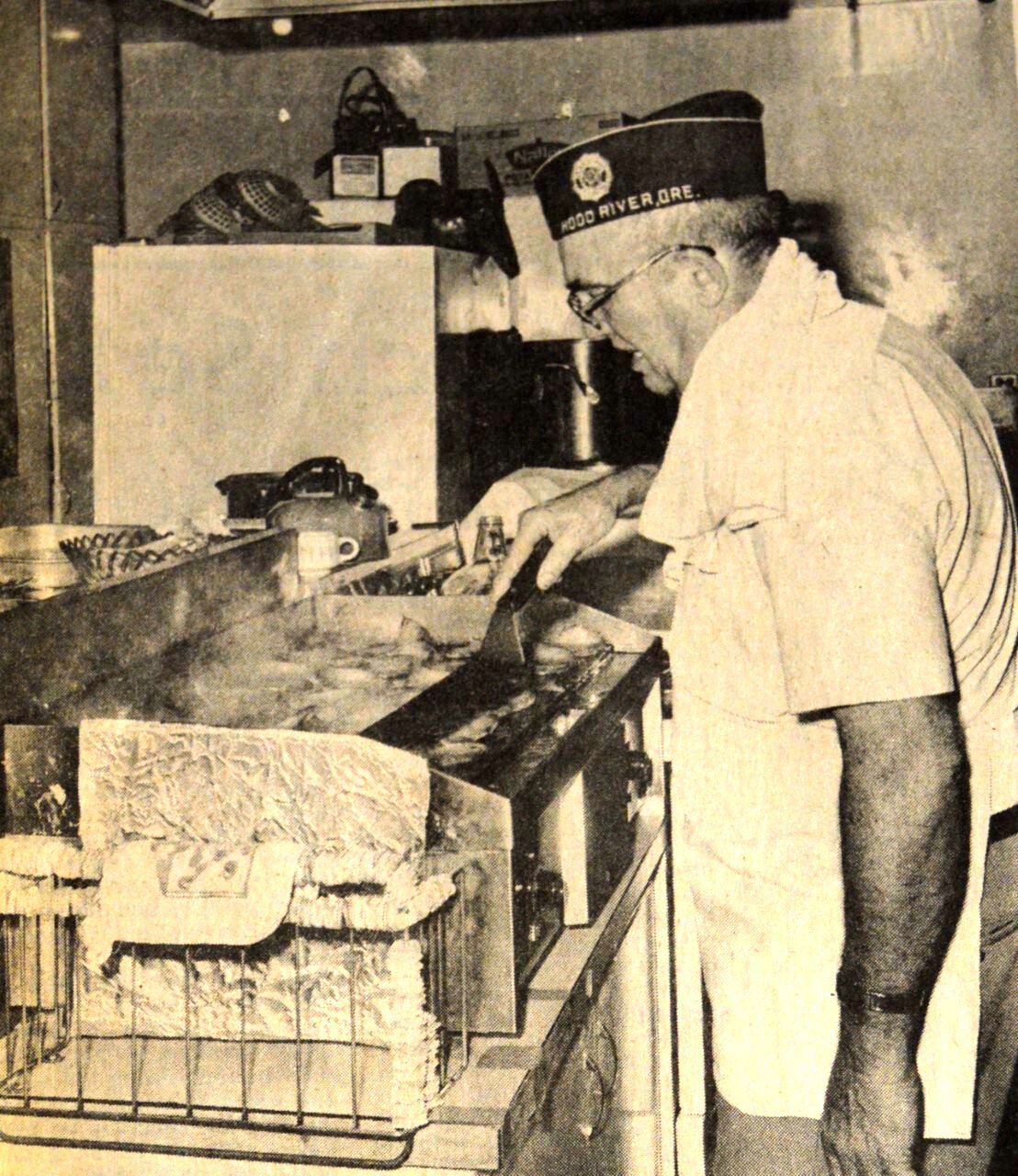 Veteran Cook: Charlie Koehler may feel more comfortable with his mechanic’s wrench in hand than a spatula, but when Veterans Day rolls around, he doesn’t back off from the heat in the kitchen. With the rest of the loyal Legion and Auxiliary team, he cooked ham, hotcakes and eggs for breakfasting vets and their families at the Legion Club on Tuesday. Traditionally, “early bird” members got a free Nov. 11 breakfast, and many more come by just for the good food. This year was no exception, as the people starting coming about 5:30 a.m. and kept coming until the line closed before Veterans Day services.

The Oregon Wheat Growers League hosts guests on the Frances of Aberdeen, Wash., while docked in The Dalles June 6, 1951, following the 4-H and FFA show and sale, and a youth banquet at The Dalles Civic Auditorium. Photograph by George Lindsay, The Dalles Optomist.

A pre-Christmas sale scheduled at The Leonora ‘Spegialty’ Shop in the Nov. 22, 1940, Hood River News.

Veteran Cook: Charlie Koehler may feel more comfortable with his mechanic’s wrench in hand than a spatula, but when Veterans Day rolls around, he doesn’t back off from the heat in the kitchen. With the rest of the loyal Legion and Auxiliary team, he cooked ham, hotcakes and eggs for breakfasting vets and their families at the Legion Club on Tuesday. Traditionally, “early bird” members got a free Nov. 11 breakfast, and many more come by just for the good food. This year was no exception, as the people starting coming about 5:30 a.m. and kept coming until the line closed before Veterans Day services.

If the ranchers of Dee Flat have their way, and they probably will, one of the first pieces of road work that will be tackled in early spring will be the link that connects the Flat with the outside world. Those who have been over the road from the railroad crossing at Dee to the top of the hill declare it to be easily the worst of the traveled roads in the county and the ranchers up on the hill fear that, if bad weather sets in, they will be practically isolated. — Hood River News

Definite plans for the immediate construction of the new city lighting system, which the merchants on Second Street plan to install at their own expense, were formulated last night at a meeting of chairmen representing the different business blocks on the street. — The Dalles Chronicle

Hood River County received its first call for five men to serve in the U.S. Army under the Selective Service Act — and filled its quota, not with drafted men, but with volunteers, five of whom had already complied with requirements and were ready and willing to leave for Portland to submit themselves to the final test before sworn in for national army service. The five volunteers, who left Wednesday for Portland, are Norval E. Shurtliff, Parkdale; Lloyd Emil Mollgaard of RFD 3, Hood River; Robert S. Havener, Hood River; Leslie L. Gump, Parkdale; and Robert Butler, Hood River. — Hood River News

The Dalles High School Indians, northern division title-holders, will meet Medford’s Pear Pickers at Medford Thursday afternoon of this week in a “Turkey day” game which will mark the first definite step of the long-awaited march toward determining Oregon’s 1940 prep football champion. — The Dalles Chronicle

County commissioners have tentatively rejected to an architects’ plan for new District Court chambers in the courthouse, except to make a decision “soon” on the final arrangements for the new judge at the courthouse. The county court met last week with Judge-elect Teunis J. Wyers, discussed the needs of the new office. They emphasized that they were “just talking” about plans right now, have to definite changes in present courthouse office space in mind. They did, however, indicate that space for the new use will probable be sought on the second flour of the building near the circuit court room. — Hood River News

Four proposed sites for a new state office building in Hood River were undergoing examination this week before one of them is selected for construction. All four proposals would involve construction of new buildings, and all call for one-story structures. The building would be designed to house human resources services such as employment, corrections, children’s services and Adult and Family Services, and veterans affairs. — Hood River News

Both sides of the Columbia Gorge would benefit from “rational federal management,” said Multnomah County Executive Don Clark said today. He announced plans to form a committee to ask Congress to designate the Gorge as a national scenic area. — The Dalles Chronicle

(1979) Side by side they sit, arms entwined and hair a bit tousled as they gaze straight ahead. Each sports a costume of brightly colored and freshly pressed sewn-on clothes. At the Edna Ransier home in White Salmon, Raggedy Anns and Raggedy Andys crowd into place on a sofa in Ransier’s mini toy shop. “I love to make the toys,” said Ransier, who began stitching the soft, cuddly creatures five years ago.

This is the busiest time of the year for Ransier, who spends her days cutting doll patterns, sewing seams and rapidly working yarn over crocheting needles. Ransier give Dottie Blake, owner of Das Kinder Haus in White Salmon, credit for her newfound hobby. She says it was Blake who encouraged her five years ago to take up her needles and thread. Shortly before, Ransier’s husband had passed away. “I thought it’d keep my mind occupied,” she said. While Ransier talked, she pointed to an Ann and Andy pair dressed in matching yellow gingham outfits. “Those are for my daughter,” she said. “The daughter has a family of her own.” — White Salmon Enterprise

MOSIER — Songs of patriotism filled the Mosier School gymnasium Wednesday. It was music day at Mosier School. That made it the perfect opportunity to honor the community’s veterans, a few days after the official Veterans Day observance. Fourteen men and women who served the country in World War II, Korea and Vietnam attended the ceremony. The veterans and about 25 community members joined the students in singing “America the Beautiful” and “Star Spangled Banner,” under direction of music teacher Sydney Stevens. — Hood River News

Scenic area stakeholders cleared the air with regard to the level they want to be involved in the development of the Columbia River Gorge National Scenic Area’s air quality work plan. The lack of involvement by county commissioners at the very start of the process was a major sticking point. — The Dalles Chronicle

The process of rejuvenation continues for the Port of Klickitat, and the result is slowly bringing a long anticipated economic boom to the west end of Klickitat County. Earlier this month, for example, the Port opened its “Building 1-B,” a new 9,750 square foot building just south of its exist 11,520 square foot “Building 1-A.” Even before Building 1-B was officially opened, the entire space had been claimed by Innovative Composites Engineering (ICE), who had occupied a relatively cramped 6,400 square foot space in Building 1-A for the past four years. “Once word got out, the new building was up and running, I’ve heard from more people than I have space for,” said Dianne Sherwood, executive director for the Port of Klickitat. — White Salmon Enterprise

Owners of cars who like plenty of elbow room when they are turning corners will no doubt appreciate the action taken of the city fathers, who have cut away several of the dangerous corners on turns leading to the Heights.

The first cut was made on the corner of 12th and Eugene, a corner which has been the scene of several accidents. This cut is complete and the family living on the northeast corner of Eugene and 12th will now have a reasonable chance of maintaining a permanent fence in their garden.

The second cut on the southeast corner of State and Ninth is now under construction and will be greatly appreciated by all car and truck owners, a high bank, having in the past proved dangerous to all taking the corner on the ascent of the grade.

Excavation is nearly completed at Big Eddy, and tomorrow night will probably bring this work to a close, members of the local highway office today announced.

The entire state right-of-way has been worked over, and a considerable quantity of valuable relics found. The local highway office, where these relics have been taken for safe keeping, is beginning to take on the appearance of an up-to-date museum.

Several exceedingly fine specimens have been uncovered during the past several days, among them stone war clubs, painted and carved bowls and pestles stone hammers, and various pieces of what is believed to have been the paint used by the Indians for their drawings on the cliffs.

As soon as excavation has been definitely completed, the entire lot will be shipped to the Oregon Historical society at Portland.

An attempt will be made by local highway officials to get in touch with Louis Freeman, world traveler and magazine writer, who is paddling down the Columbia river in a canoe, in search of material for stories. If he can be located, he will be taken to Big Eddy and shown the find uncovered by the highway workers.

National and world news headlines from The Dalles Daily Chronicle.

Four mail bandits are in custody

Some GOP Hope Recount Will Give Election to Nixon

Death Ringing Down Curtain on Stars from Movies’ Golden Age

‘She moved us forward’: Lorinda Hoffman honored as she retires from FISH

My favorite holiday smells — aside from turkey