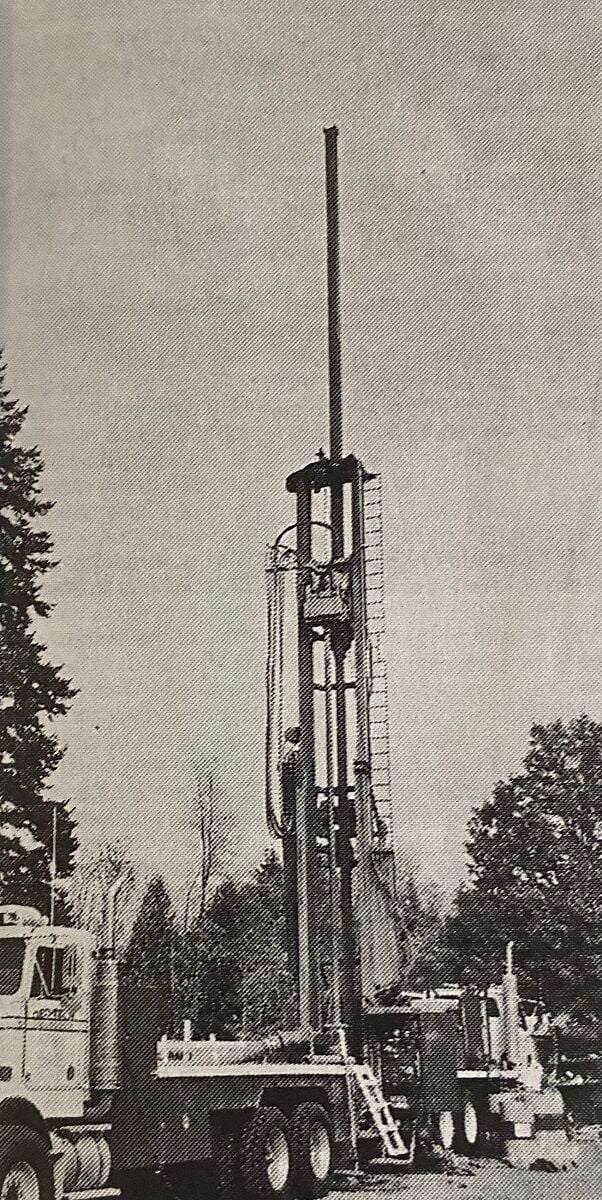 Westerberg Drilling (see story) apparently struck “liquid gold” in the form of a possible artesian well while drilling a production well for the city of White Salmon. 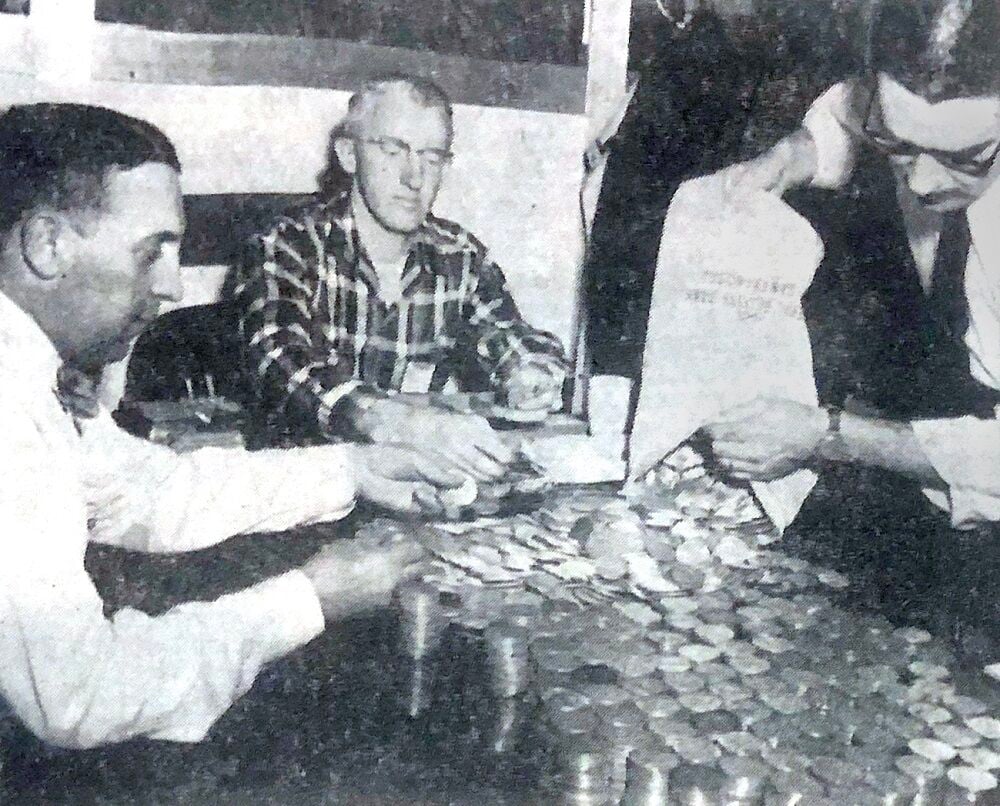 Silver Deluge — All of the available silver dollars in the Pacific Northwest were being paid to employees of Harvey Aluminum here today to demonstrate impact of the industry’s payroll on the economy of the region. The dollars, totaling more than 65,000, were gathered from Federal Reserve System vaults in Portland and San Francisco and the Denver mint. — March 3, 1961, The Dalles Daily Chronicle 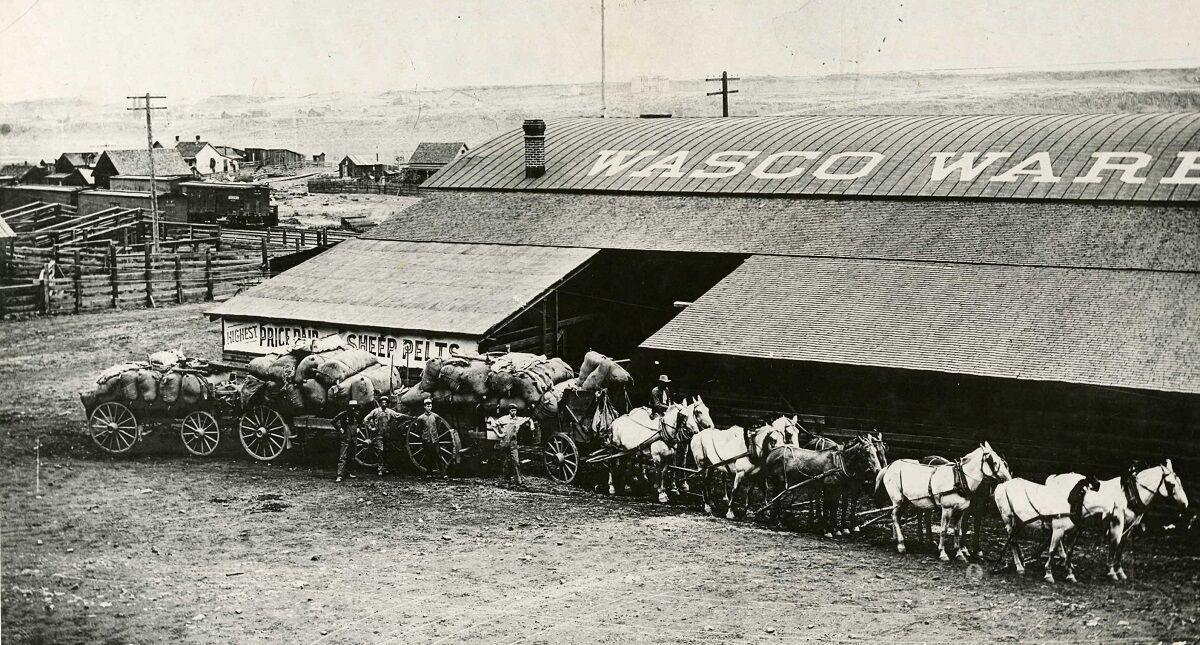 Contractors are at work tearing town the old Park St. School and if able only the site and piles of lumber and rubbish will remain at the end of another week. The old school bell, which has rung out the invitation to Hood River pupils for 25 years at Park St. School, and which was on the old court house five years before, will be transferred to the new building and installed with appropriate exercises in the near future. — Hood River News

Increase in telephone rates, granted by the Oregon public service commission yesterday afternoon, will be comparatively small in The Dalles, according to Attorney John Gavin, who represented the city in the rate hearings held in Portland. All residence telephones rates will be increased by 25 cents a month. All business and office telephones in the city will stand a 50 cent increase in monthly rates. — The Dalles Daily Chronicle

A center of interest in town on Tuesday of last week was a giant, portable concrete mixer, known as the “Mixermobile,” which is one of a number of these machines being built in Portland. The Mixermobile, which is fully automatic in all its operations, has a capacity of two cubic yards of mix, yet is so portable that it can easily be driven under its own power point to point on any fair road. Following the Mixermobile was a new type of concrete spreader, also self-powered, which, it is claimed, will do a surprising rapid and efficient job. The equipment was on its way to Pendleton, where a new airport is to be constructed. — Hood River News

New work on the Columbia River channel between Bonneville and Vancouver, to cost $342,450, was included in recommendation of the US Army engineers made today. The Columbia above Celilo falls to the mouth of the Snake river came in for a recommendation of $100,000 for new work. — The Dalles Daily Chronicle

Cascade Locks, with what fans call the town’s best prep basketball team in recent years, travels to The Dalles tomorrow for the first round of District 6-B basketball tournament. Eight teams from the Big 6 and Deschutes B leagues are entered. The winner goes to represent the area in the B basketball state championship tournament. Mosier High also heads to the tournament as the Big 6 loop’s fourth-place entry. The 6-B tournament starts Friday at The Dalles Junior High gymnasium. Cascade Locks plays Culver High at 6:30 p.m. — Hood River News

Petitions disapproving of the “continuous pressure” being applied on the subject of fluoride emissions are being circulated in The Dalles by a Community Growth Though Industry Committee. “We are well aware that the alleged damage to the cherry industry is not attributable to the aluminum plant,” the petition states. — The Dalles Daily Chronicle

The Federal Highway Commission has confirmed the Mt. Hood Loop Highway is eligible for Emergency Relief (ER) funds. It means the federal government will pay all the costs of repairing the 6.7 miles of the highway (35), that washed out Christmas night. Estimated cost of repairs has now been set at $12.7 million. However, it was noted that because of requirements across the country, including the St. Helens eruption, the money might not all be available this fiscal year. But the Department of Transportation plans to let a contract in May at least to start the repair work this year. — Hood River News

A loophole in the city traffic ordinance makes it tough to enforce a ticket for parking in a yellow striped zone unless the zone also has signs which spell out the reasons. Therefore, the city attorney will adjust the ordinance to repair the situation. The situation came to light some time ago when City Judge Ron Somers, following a 9th Circuit Court of Appeals principle, noting that proper notice is not necessarily served simply be painting the sidewalk curb yellow because different cities in Oregon and different states use different colored paint to mean different things. — The Dalles Daily Chronicle

Citing several legal precedents and Washington statutes, Klickitat County Superior Court Judge Ted Kolbaba ruled that jurisdiction over a murder trial involving one 17-year-old and one 18-year-old will remain with the state. Kolbaba was responding to a motion introduced by Adam Moorde, a Yakima attorney, requesting jurisdiction be moved to federal courts. The reason cited for the request was that the crime was allegedly committed by Indians against Indians on land held in trust by the federal government for Indians. On Dec. 29, Warren Neal Cloud and Arthur James Cloud, both aged 17, were arrested by federal and county police officers and charged with first degree murder in the axing death of Gary Frank. —White Salmon Enterprise

Patricia Roberts had a “certain feline” something was up on Wednesday. Roberts’ cat “was running all over the house, very anxiously,” around her Parkdale home starting around 10 a.m. Then, at 10:55 a.m., the floors shook as Wednesday’s earthquake rumbled through Hood River County. “As soon as it stopped, she calmed right down. They say cats can sense earthquakes, and now I know it’s true,” she said. Throughout the county, people in homes and businesses felt their chairs move, floors rock and walls wobble, but there was no damage reported anywhere. — Hood River News

In an effort to cut back on electrical use because of the energy crisis the Oregon Department of Transportation will turn off about 75 percent of the street lights at interchanges along Interstate 84. — The Dalles Chronicle

Last week, Westerberg Drilling (see photo above) apparently struck “liquid gold” in the form of a possible artesian well while drilling a production well for the city of White Salmon. The well site is near Powerline Road, a few miles north of the city limits. —White Salmon Enterprise

“The way modern girls and women are dressing, the average man can’t tell a good one from a bad one.”

“The trouble with the modern woman is that she is too lazy to make her children mind.”

“Modern girls are marrying at the age of 16 and 18; marrying men whom they wouldn’t even look at if they were 24; men who can’t make enough money even to keep the girls in silk stockings.”

These shafts at “so-called modernism” were fired last night by Mrs. Iola G. Baldwin, head of the women’s protective division of the Portland police department, before an audience of more than 200 persons, crowded into the circuit court room of the local court house. She spoke at the invitation of the local chapter of the W.C.T.U.

Mrs. Baldwin held the undivided attention of the crowd for more than two hours as she told of her experiences in dealings with fallen girls in the various cities of the Pacific coast.

Closer parental supervision of children, a community center of recreation, properly supervised, and proper supervision of all types of amusement, including pool halls and motion picture theaters, were advocated by Mrs. Baldwin as a few of the things that must come about before the boys and girls of the coming generation can be “saved from perdition.”

“The Devil hasn’t got all of the good things yet,” she explained in closing. “Even if he has gained control of a great deal of the music.” — March 3, 1921, The Dalles Daily Chronicle

Hotel For Mt. Hood Is Assured

As stated a few weeks ago by The News, it is now assured that a fine modern hotel will be built on or near the slopes of Mount Hood.

The News understands that, at a meeting held in Portland last week, those behind the project definitely decided to go ahead with the Mount Hood project, and to postpone any further work on the project for a hotel at Crater Lake.

The capital already in sight is stated to be in excess of $200,000, and the site will be somewhere near the regular trail up Mount Hood, Elk Meadows and Lost Lake. A few days ago a prominent Portland hotel man was approached with the proposal that he agree to take up the management of this hotel when it is built, and it is stated that he expressed his willingness to undertake the project. Plans are now being drawn for this new hotel, and it is expected that a full announcement will be made in the future. — March 4, 1921, Hood River News

War Has Effect On Stock Market

22 Die in Banks of Wabash Coal Mine

Present Theory On Working: Goof Offs Rise To The Top

May I Make a Few Suggestions ...