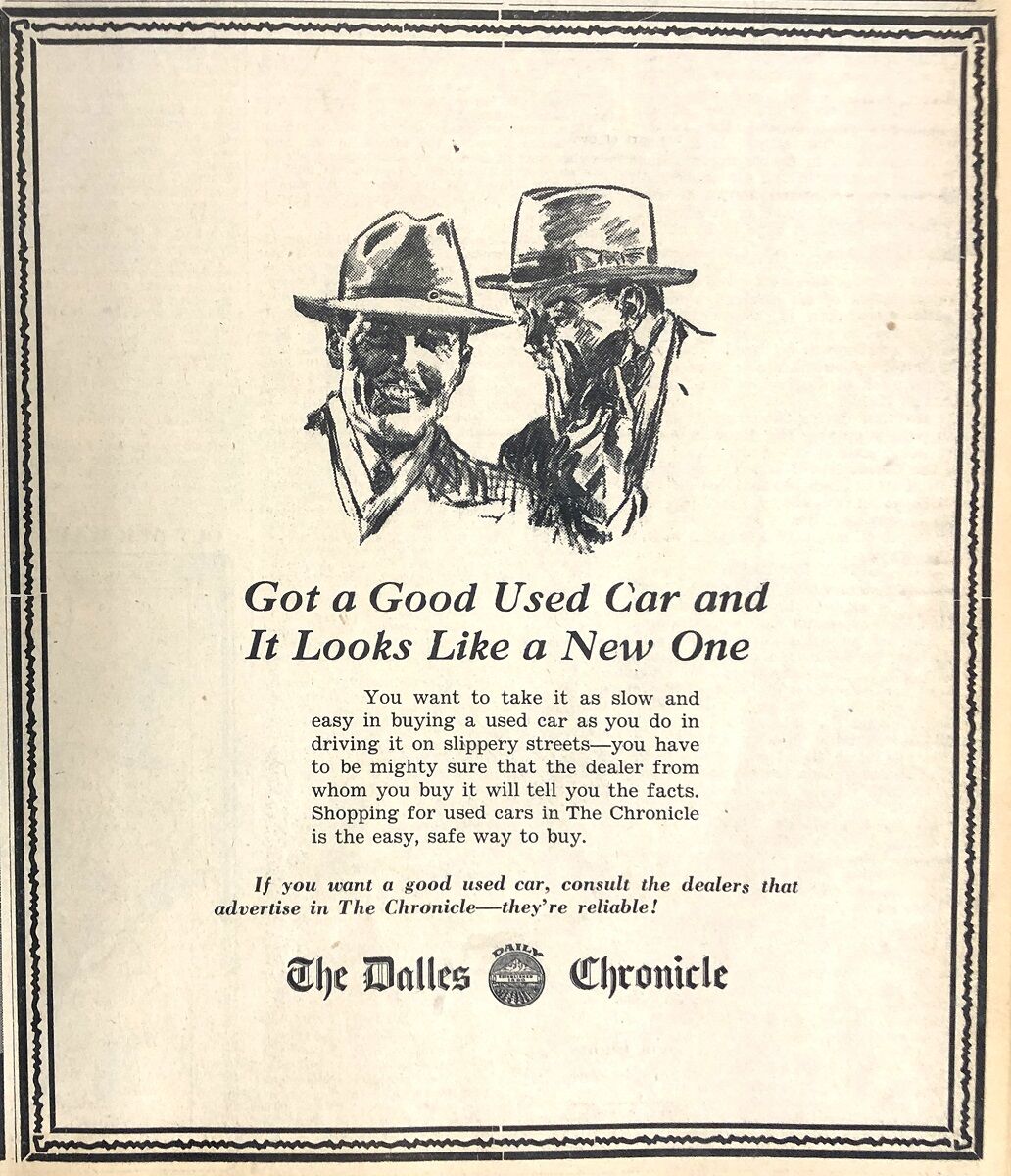 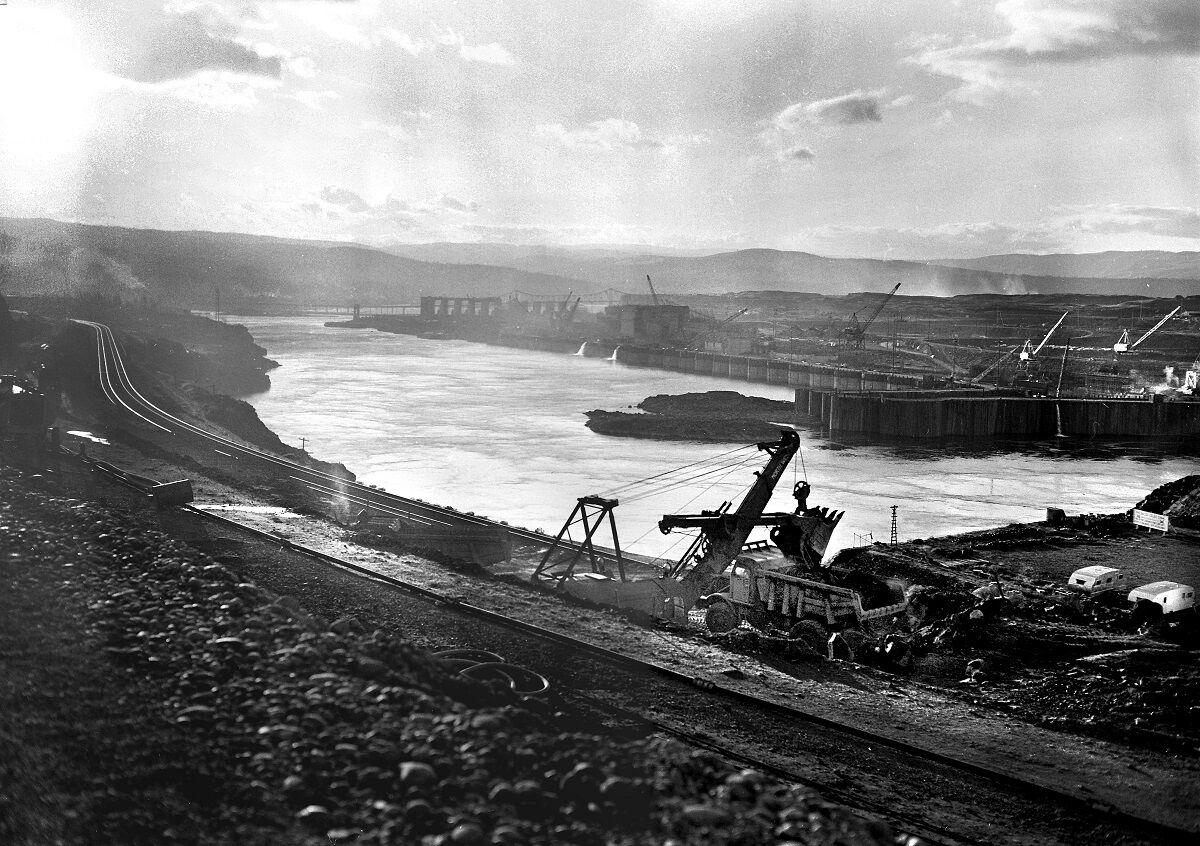 A massive backhoe loads a truck as railroad tracks are relocated around the Oregon side of The Dalles Dam in 1954. The construction in the background is the powerhouse section of the dam, also under construction, which now parallels Interstate 84. 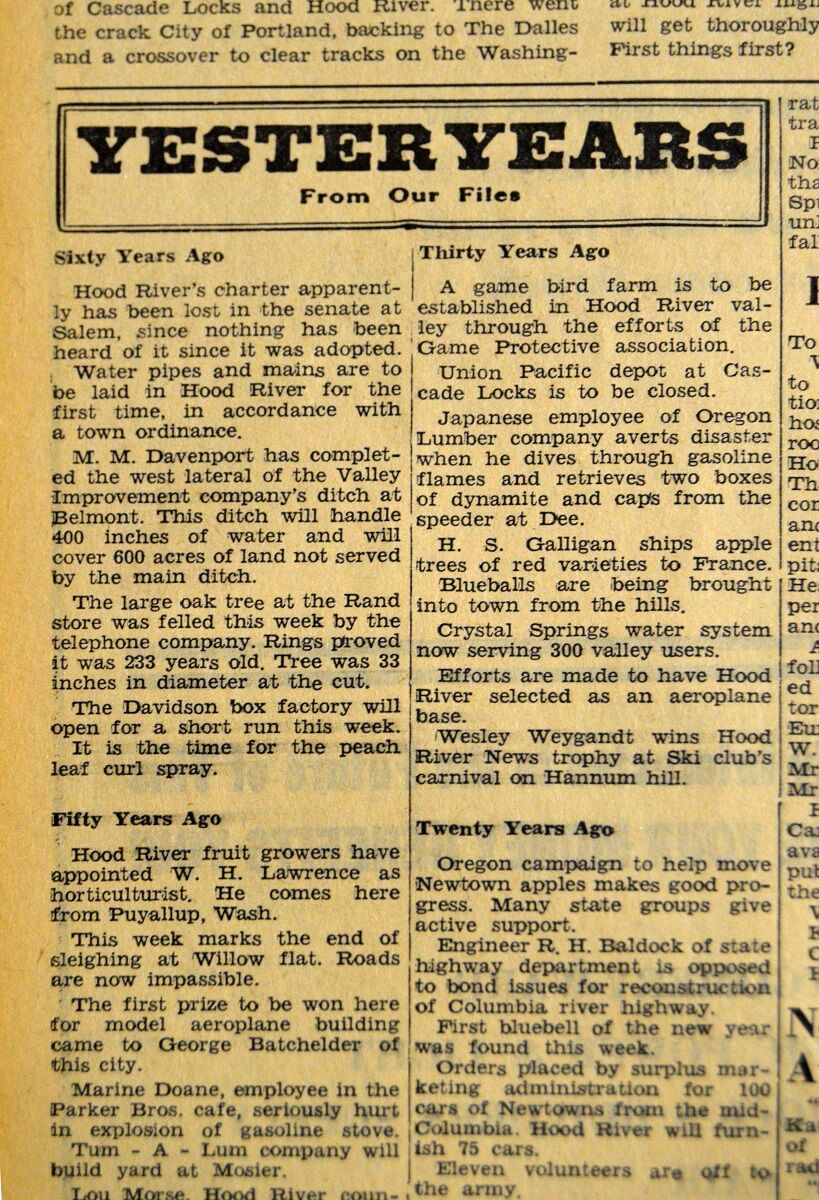 Realizing that much effort and money has been wasted through duplication in philanthropic work in Hood River during the early part of the winter, the various societies, clubs and churches doing this kind of work have organized a society known as the Public Welfare Organization. It is made up of representatives from each church, lodge, grange and club in the county and the object is to render assistance to those needing it in the most helpful manner possible. The women of the county who need help for housework, day work or hourly work are urged to register with this committee. — Hood River News

At the request of a number of residents, the city council of Hood River is now investigating the possibility of having the location of the Town-Parkdale secondary highway changed at its northern end. At the present time, this highway leaves the Columbia River Highway at Ninth and Oak, passes Park and Coe grade schools on Ninth and Eugene, and then proceeds by way of 12th Street south to the open country. The suggested change provides for the secondary highway to leave at the Columbia River Highway at 13th and Oak, up the hill by the way of 13th, then on May to rejoin the resent location on 12th. — Hood River News

Fred Chirsten, local plumber, narrowly averted serious injury and possible death by suffocation here yesterday morning when the sides of an 8-foot trench, in which he was laying pipe, collapsed and covered him with earth to a depth which some witnesses estimated as being more than four feet. Christen was reported to have been working with Phillip Bowman when the accident occurred shortly after 9 a.m. in front of a residence at 5050 W. 11th St. Bowman promptly sent in a call for The Dalles Fire Department. Firemen, armed with shovels and an inhalator, arrived on the scene and dug Christen out about 15 minutes later. — The Dalles Daily Chronicle

County May Close 5 Grade Schools — With parents from the West side area listening attentively, County Unit school board members heard their building committee chairman recommend a drastic change in building arrangements for the district. “This committee feels that there is no choice for the West Side but a new school building to house grades 1-8 and include enrollments presently at Barrett, Oak Grove and Frankton schools,” said building committee chair Don Hanel. Hanel went on to reveal the communities accompanying recommend dations that Mt. Hood and Centralvale schools also be discontinued “as soon as the school board deems it feasible.” — Hood River News

A $43,790 contract for construction of a concrete parapet wall at The Dalles Dam has been awarded to Jack E. Squires, general contractor, McMinnville. The wall will be placed on the existing rock fill closure of the dam on the Oregon shore of the Columbia River. — The Dalles Daily Chronicle

Gasoline prices are soaring in Hood River, but concerned motorists can still save quite a few cents a gallon by shopping around. Prices for regular gas at a dozen local stations Feb. 5 ranged from just under $1.22 a gallon to $1.41. Unleaded prices ranged from. $1.29 to $1.44, and premium went for $1.37 to $1.49. But that was two weeks ago. By last week, some gasoline wholesalers had raised their prices again, and a number of local stations felt pressured into passing those raises on to the customer. “It’s scary,” said bud Chambers, an employee of Jerry Kramer’s Downtown Shell. “It doesn’t make sense,” he said of the rising prices charged by wholesalers. — Hood River News

Voting was relatively light during the first hours today with 616 of 11,024 voters in, all but the Dufur precincts having voted. There was no answer to telephone calls to the Dufur Christian Church where 666 voters including nine from Tygh Valley could cast ballots. — The Dalles Daily Chronicle

Two of the largest YACC camps in Washington — Trout Lake and Wind River — are already feeling the effects of federal budget cutting by the Reagan administration. Enrollees at both those facilities as well as other residential Young Adult Conservation Corps camps nationwide will be out of their jobs as of Feb. 20, according to the U.S. Forest Service. The camps themselves are set for closure Jun. 30. “It was real short notice,” said Ginny Stren, group living supervisor at the Trout Lake camp, which currently employs about 35 enrollees and 10 staff members. Stren said the news was not totally unforeseen; The camps were targeted for phase-out by the end of 1981 by the Carter administration. — White Salmon Enterprise

CASCADE LOCKS — A settlement may be at hand in the longstanding boundary line dispute around Cascade Locks. A special committee of city and county administrators has been working for the past several months to find an acceptable compromise with Friends of the Columbia Gorge to correct perceived mapping errors in the National Scenic Area border around the municipality. If a settlement between both parties can be reached, it will keep the issue out of the courts, forestall a jurisdictional battle and remove the last roadblock in the county’s path toward keeping the Scenic Area ordinance it adopted in 1997. — Hood River News

In the wake of a 20 percent surcharge on Northern Wasco County PUD power bills since Jan. 1, the NWCPUD board is taking another look Saturday morning at the 2001 budget. Fixed costs may make cuts difficult. — The Dalles Chronicle

Pedestrians in Bingen can look forward to a smoother place to walk soon. By the end of the summer, a six-block stretch of Humboldt is expected to be graced with new sidewalks, with a $75,000 state “pedestrian safety and mobility program” grant covering the costs. “We’re hoping to have them done by the end of the summer,” said Bingen Mayor Brian Prigel. The new sidewalks will stretch from Cedar Street to Willow Street, and depending on the cost, will line both sides of the street. “Humboldt is a secondary thoroughfare. Especially if we get the community center built in the park, it’s a logical route for pedestrians,” Prigel said. — White Salmon Enterprise

Fire of undetermined origin destroyed the James Delaney grocery store and garage at Wishram Saturday evening, it was learned here today. The flames broke out at approximately 7:30 p.m. and quickly leveled the two buildings, causing considerable damage, part of which is said to be covered by insurance.

According to reports received in The Dalles this morning, the fire started shortly after Delaney had locked up for the night and had gone home. The two buildings, both of frame construction burned fast but all cars were removed to safety. Prompt action on the part of residents who commanded a heavy S.P.&S. fire hose prevented dwellings in the immediate vicinity from catching fire.

Saturday’s blaze was Wishram’s second within a period of 10 days. On Feb. 5, the front of Dr. Short’s drug store burst into flames about 10 p.m. Damage amounted to approximately $60, fully covered by insurance.

Only the front door, screen and framework around the drug store burned, the remainder of the building being fireproof with the tile construction and a cement floor.

Investigation, it is said, points to arson as the cause of the blaze. A large amount of railroad waste, soaked with gasoline, was found inside the screen door after the flames had been quenched. The fire flared up suddenly, generating such terrific heat that it immediately shattered the plate glass in the door and destroyed the entrance within a few minutes. It was put out by an extinguisher manned by the manager of the S.P.&S. restaurant and hotel.

Somewhere there’s an anger burning a 10-year-old in Hood River County. County commissioners would like to help, but they don’t know how.

An unsigned, unidentified letter appeared in the last packet for a county commission meeting that explained the feeling.

“Dear Commission,” it started out, “I am 10 years old and I do not like what you are doing. I love animals and you keep killing them and wasting the meat. It’s not fair. So stop it.”

Not thinking of themselves in the animal-killing business, the commissioners were at a loss to know where to take action. The county has a fund for compensating owners for some stock losses, but that doesn’t involve wasting meat. Neither does the task of the county dog control office. The board might be eager to comply if it knew the problem. But so far, it remains a minor mystery how to respond.

Clerk Donna Sherwood, who made up the board information packet, couldn’t clear up the mystery. “We just don’t know,” she said. “It was addressed to the commission, though, so that’s where we thought it should go.”

Bonding of the city for $225,000, the funds raised to be used in the construction of a storage reservoir and dam at the Mill Creek falls, for augmentation of the present city water supply, will be put before the voters in a special election, to be held March 16, the city council decided at a special executive meeting held in the city all last night.

J.T. Rorick, chairman of the water commission, explained to the council that such a dam and storage reservoir would impound approximately 100,000,000 gallons of water, sufficient to allow the use of an extra 1,000,000 gallons of a water a day duri9ng the dry spell and water famine, faced by The Dalles each summer. This extra water a day would be sufficient to supply every need of the city, and would also insure adequate pressure in every home in the city, Rorick said.

All of the estimates of cost of construction were made when labor and materials were at the high peak, Rorick explained, adding that he was of the opinion that the project could be completed this year for considerably less than the original estimate.

The project would also include a new pipe line from the dam reservoir to the storage reservoir in Sorosis park. The present pipe line is old and in danger of breaking.

2 Teachers Are Shot And Beaten To Death

Divert Japs To Siberia, Is Plea Of Hays Hammond

Wife Of Bandit Held By Police

Through the Eyes of an Elder: An accidental Gypsy