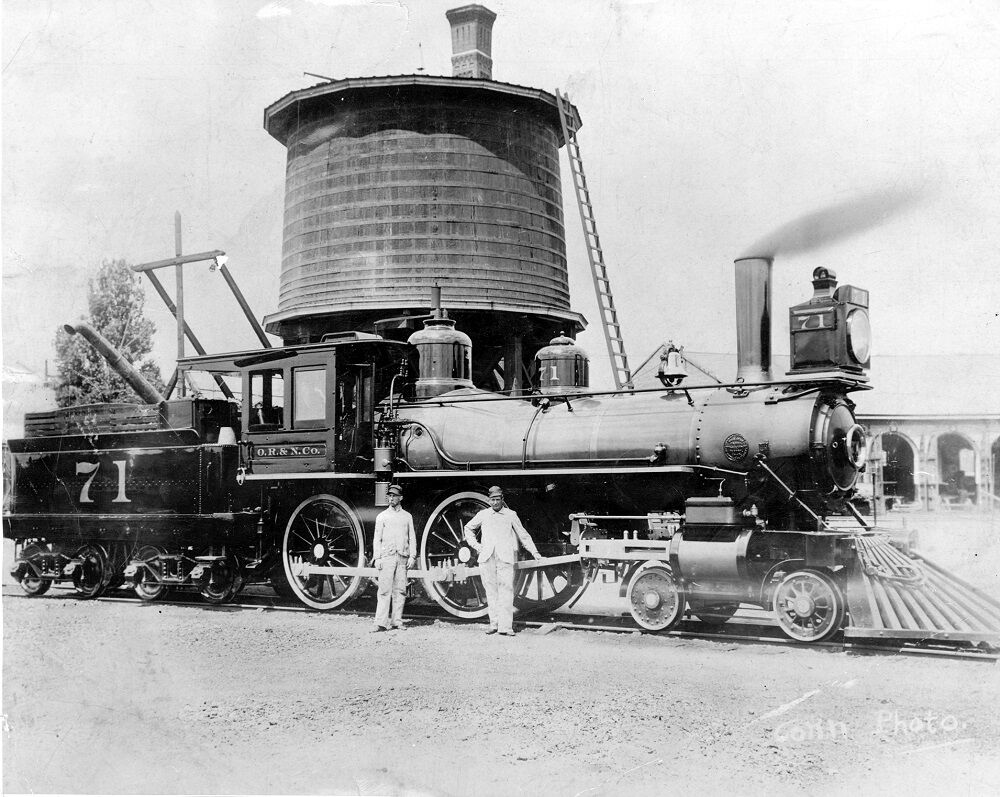 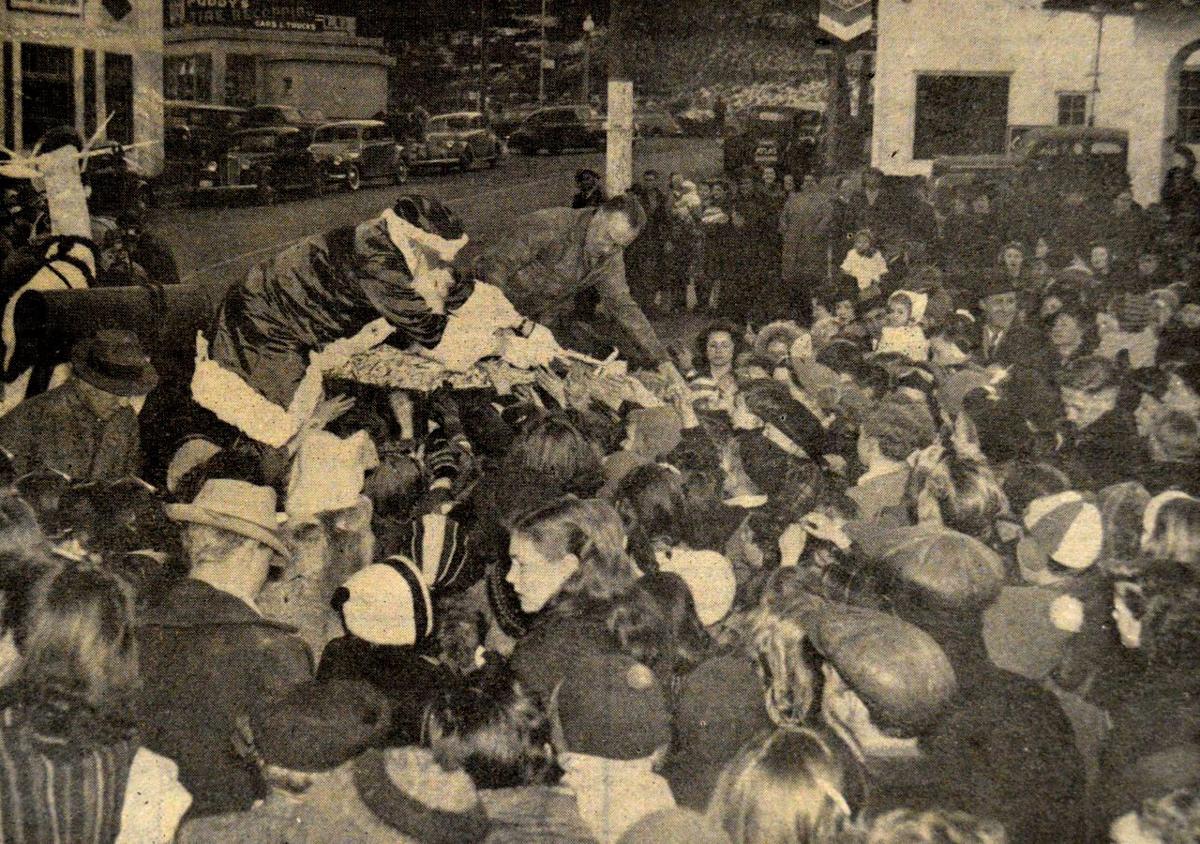 In keeping with the spirit of the season, Santa Claus was pressed into service last Saturday afternoon for the customary parade down Oak Street. Many youthful worshipers followed their idol to the big tree at the end of the street, where Santa, assisted by Harold Loomis and Fred Pattison, passed out candy to the kiddies. — Hood River News, Dec. 20, 1940 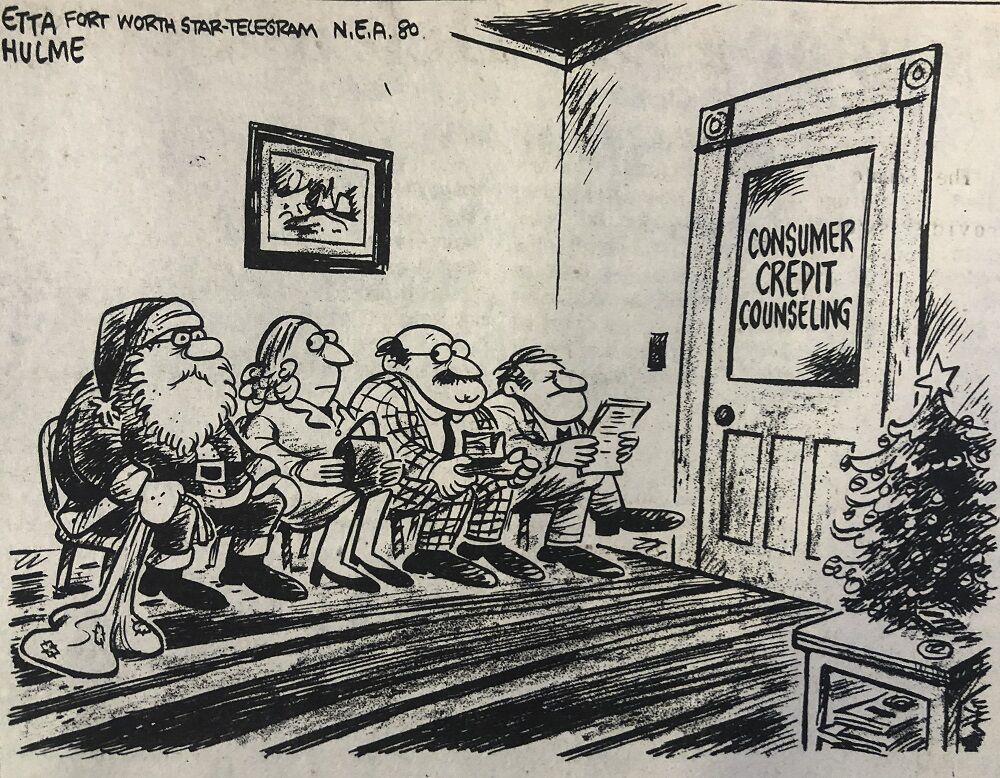 In the advertisements being published now by merchants of The Dalles, they are giving you the latest news of their stores. Everyone is shopping and everyone is buying, or should be buying, in The Dalles. If you are skeptical about the prices in The Dalles, compare those quoted in these columns by the merchants with those published by Portland merchants. You will find that item for item, local prices are either the same or lower. — The Dalles Daily Chronicle

A big treat is in store for the boys and girls of this community next Wednesday, Christmas Day, when the Hood River Elks Club will sponsor a free show at the Rialto Theater. Following the show, which will start at 10 o’clock and will be a full length special feature, Santa Claus will be the center of attraction at a big Christmas tree at the Elks Temple. There will be gifts and presents for all children of town and valley who attend. Inasmuch as a big crowd of children is expected, plans have been made to insure their safety by having downtown streets patrolled to keep the children free from any traffic hazard. — Hood River News

First editor of The Dalles Daily Chronicle was John H. Cradlebaugh, a man of exceptional talents and a keen follower of the journalistic profession. Twenty-five years ago Cradlebaugh wrote of his impressions of the birth of The Chronicle in 1890 and its subsequent early history. These impressions have been recorded and are republished as follows... — The Dalles Daily Chronicle

Mt. Hood residents who’d been away for a while were startled by the sight greeting them at the Mt. Hood School corner. There, in the suddenly empty lot where George Hanel’s historic Mt. Hood Post Office had always been was just a pile of lumber. On a heavy timber frame, with men and machine provided by the State Highway Department, the Hanel store and P.O. were trucked out of the path of the new swath that the state will cut as it pushes the Loop Highway project on into the Hood River Valley. — Hood River News

The Dee Hardboard Plant is back in full operation this week for the first time in almost a month and Champion International announced its Neal Creek sawmill will shut down Dec. 22 through January during installation of a new lumber edger. Workers were called back to their jobs Monday at the Dee plant after the company operated with a skeleton crew last week during a shutdown involving the temporary layoff of about 115 employees. The Neal Creek sawmill shutdown will result in the layoff of approximately 95. — Hood River News

What authorities had first feared was a spill of the toxic chemical PCB at a truck weighing station on Interstate 84 west of Hood River turned out to be oil sludge and was not hazardous, the Oregon State Police said late Wednesday. — The Dalles Daily Chronicle

(1979) A lack of quorum at Bingen City Council halted progress on the adoption of a county-wide amended six-year comprehensive road improvement program and the City of Bingen’s allocation to the Klickitat County Regional Planning Board. — White Salmon Enterprise

Old Man Winter blew into town with a vengeance this week, arriving a few days ahead of schedule. Snow began falling mid-week, creating hazardous road conditions around the county, in town and on I-84 by Wednesday afternoon. by Thursday, city workers spreading sand and gravel struggled to keep pace with the storm, as snow falling heavily throughout the morning turned streets into icy runways and sent cars bouncing off one another. — Hood River News

A tractor trailer rig plunged off the O.S. 97 bridge and dropped 150 feet into the Columbia River Friday, killing the driver. The vehicle was not visible above the water. Searchers immediately began checking both sides of the river for survivors. Search divers using a video camera located the man in the tractor trailer but was not able to immediately recover his body because of dangerous river conditions. — The Dalles Daily Chronicle

The White Salmon City Council voted 4-0 to maintain ownership of the building that previously housed the White Salmon Community Library. The 1,600 square foot building has been vacant since the library moved to its new location in May. — White Salmon Enterprise

Grand jury investigation of a wild party attended mostly by teen-agers has resulted in closer control of teen-age activity on downtown Dalles streets and a complaint charging an adult with buying beer for minors.

The complaint was recommended by the grand jury along with a suggestion that existing local ordinances governing the after-dark activities of teen-agers be enforced.

As a result District Attorney Herry J. Hogan has addressed a letter to Dalles Mayor John Howe telling him of the grand jury’s concern.

In the letter Hogan informs the mayor the grand jury was concerned about the freedom allowed teen-agers on Dalles City streets at night.

In the interviews of some 15 young people attending a Saturday night party resulting in several complaints to city police, the grand jury this week learned that 14 and 15-year-old girls had been on downtown city streets well after 10 p.m.

In accordance with the grand jury’s recommendations Dalles Police Chief Robert Bower has contacted owners and operators of Dalles all-night restaurants. Proprietors have assured him, Brower said, they will attempt to curb after hour loitering by teenagers.

A number of Hood River stores are already reflecting that Christmas cheer which means so much to all shoppers at this season of the year. In spite of the difficulty experienced in securing certain wanted lines, every store that is making a special effort to cater to the Xmas trade is carrying lines of such extensive variety that one would be hard to please if he or she could not find a gift suitable for the season.

Store windows do not always lend themselves to clever decorative designs, but there are some in the city this season that will certainly attract much favorable comment.

Wayne Poland has let himself go in the Franz store and his gift window is a thing of beauty. The artist at the Star Grocery has also produced a very clever and seasonal design.

But the most novel exhibit of the season is that at the Mt. Hood Meat Co. One would not think of meat in designs, but when you are passing, take a glance and you will admit that “art steps in where nature fails.”

Many of the interiors of the stores are extremely attractive with Xmas designs and there are several in which the finishing touches are yet to be added.

A bus carrying The Dalles High School girls varsity and junior varsity basketball team members and coaches may have been shot while entering Portland Monday afternoon.

No one was hurt, but a window was broken.

Authorities initially are working from the assumption the incident involved a gunshot, though a bullet was not found inside the bus.

The bus was traveling westbound on Interstate 84 between 182nd and 166th streets when it was hit in the left side rear window by an object assumed to be a bullet. That was about 4 p.m.

Driver Charles Dunlap said the concussion from the object hitting the window “sounded like a firecracker or gun going off.”

Glass sprayed three or four girls sitting near the window, but no one was hurt.

Dunlap tried to contact the Oregon State Police or the Multnomah County Sheriff’s Department on the bus radio, but was unable to do so. He drove through Portland and finally reached the Beaverton office of the state police. A trooper responded at 5:15 p.m. and took the report.

The bus continued to Hillsboro, where the varsity team won and the junior varsity lost.