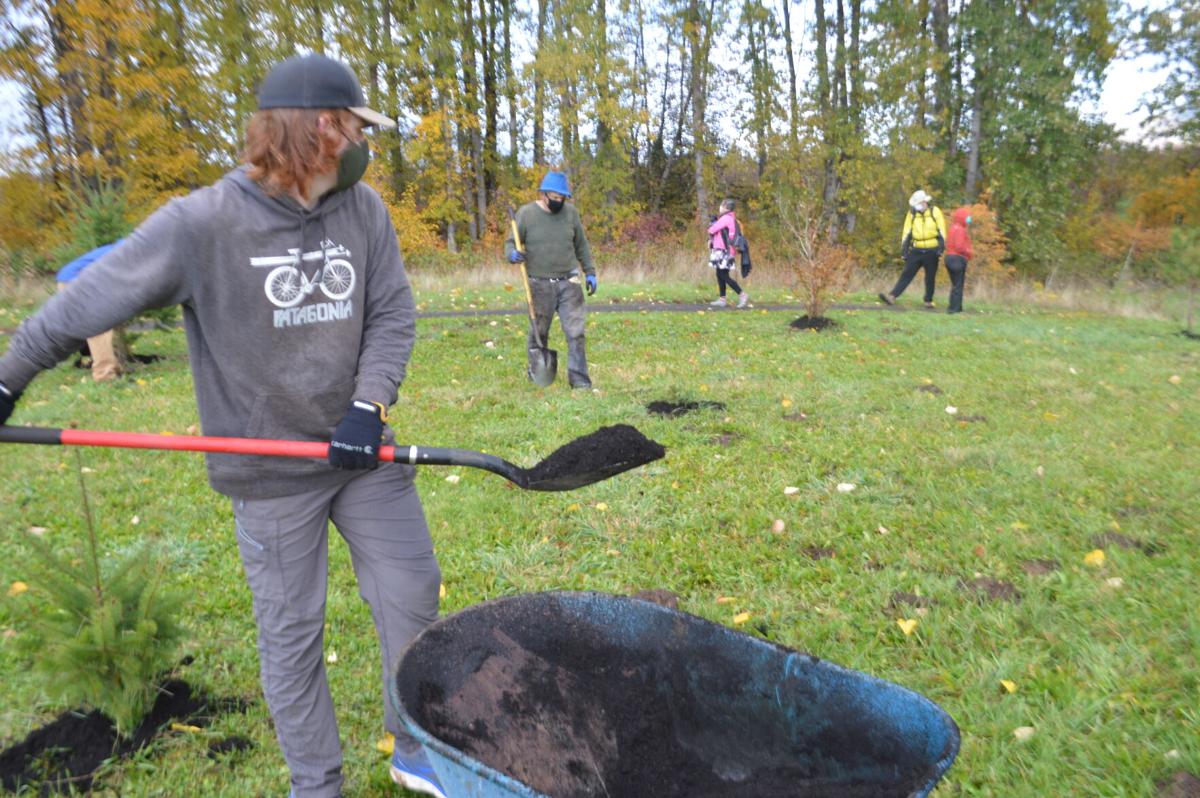 Hayden Jacobson and John Lockman of White Salmon spread mulch around newly-planted Douglas firs along the trail in Barrett Park. 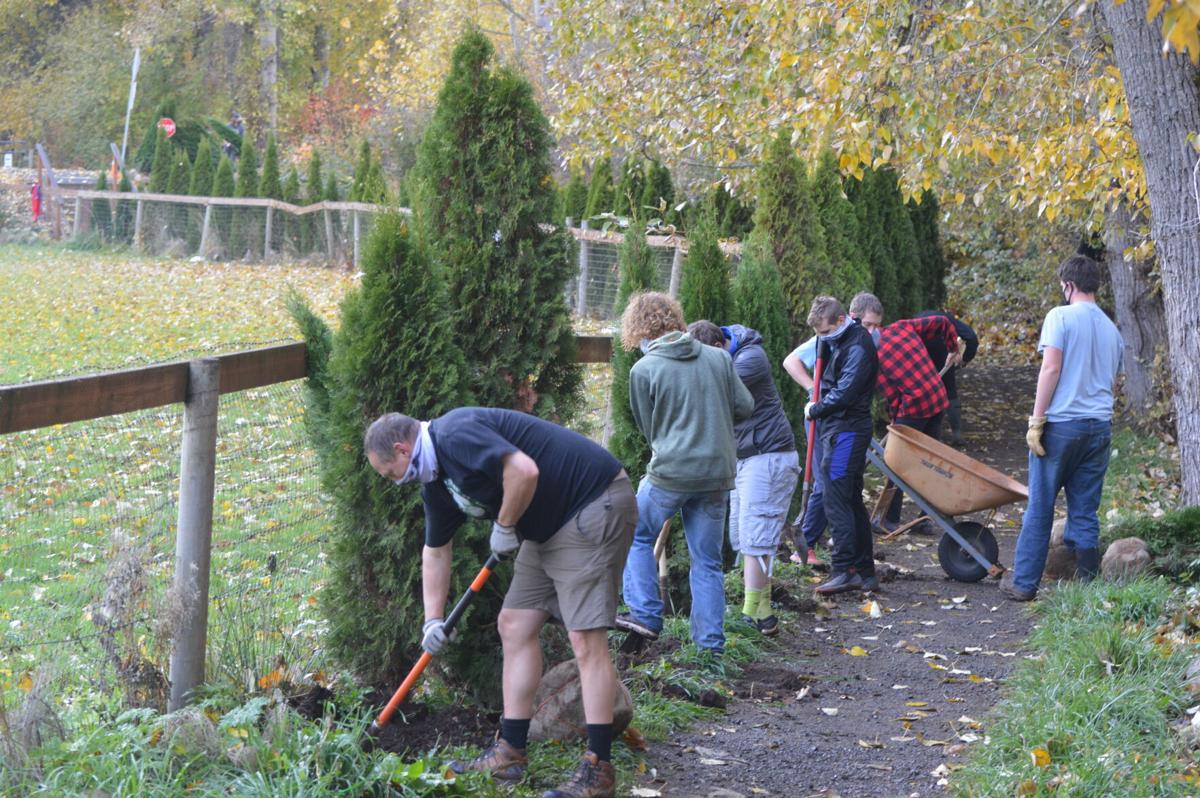 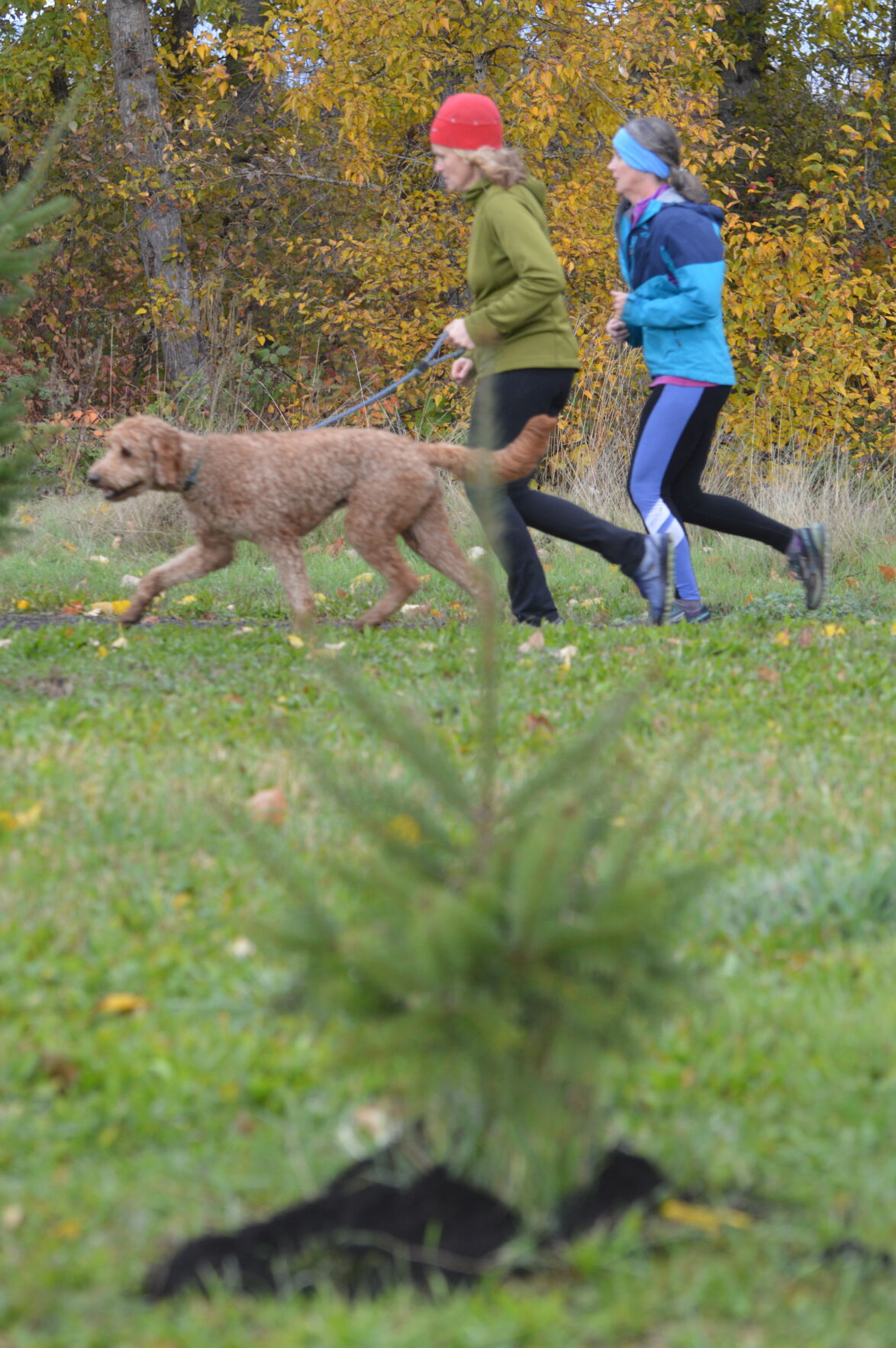 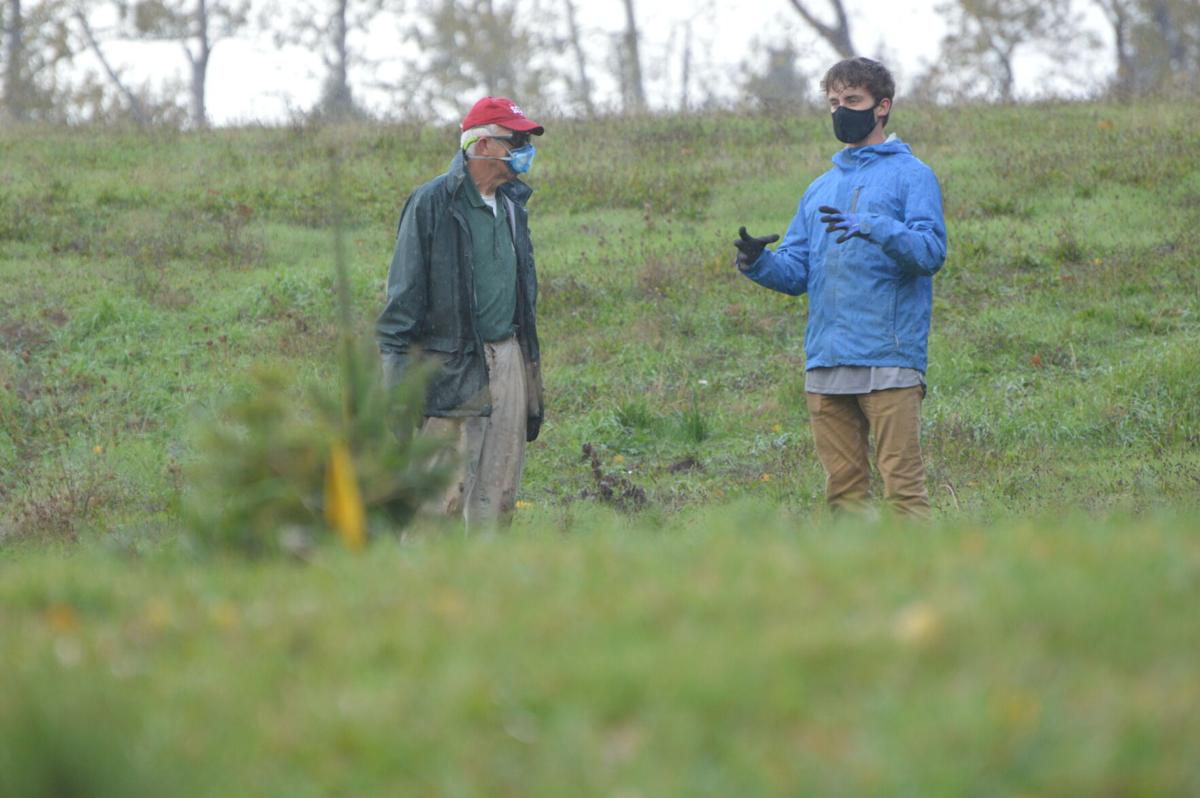 Hayden Jacobson and John Lockman of White Salmon spread mulch around newly-planted Douglas firs along the trail in Barrett Park.

The vitae of new arbors enlivens the western-most part of Indian Creek Trail near Hood River.

Walkers on the public trail will notice more trees along the trail in Barrett Park and the adjoining section just east of Alameda Road.

Nate Roth of White Salmon organized the Nov. 7 work project to fulfill his Eagle Scout rank, with help from family and about 20 friends including fellow Scouting members, planting Douglas fir and arbor vitae along the trail.

The Douglas firs grace the sloping section of the trail west of Alameda, and the arbor vitae create a green barrier on the east side of the road, between the trail and private property. Indian Creek Trail stretches for three miles from Barrett Park, west of Hood River, nearly to downtown.

Roth, 17, said, “It’s really important for me to look back in 30 years and say, ‘I’m really glad I chose that.’ I want to come back and see it, so I settled on a tree planting.” Roth raised more than $1,000 and was able to donate the extra $700 raised to the Lyle-based non-profit Trees of the Gorge for future tree plantings. A long list of supporters included a Parkdale nursery donating 75 firs.

The project is one that will live on for years, and excess funds Roth raised will extend tree-planting elsewhere in the Gorge via Trees of the Gorge, whose founder, Bill Weiler, agreed to serve as official beneficiary of the Eagle project.

“Bill invited me to attend a planting he was working on at the Sandy River Delta in early March,” Roth said. “I knew Bill from other things we’ve done and we’ve worked with Trees of the Gorge and he’s a great resource to reach out and sort it out. He helped me figure location and resources.”

Roth explained, “I had the idea of doing a tree planting for my project this past winter. After the planting at the Sandy River Delta I decided I definitely did want to try and do a tree planting for my Eagle project,” Roth said. Weiler founded Trees of the Gorge with friends and family two years ago and has done multiple plantings, in cooperation with schools and community groups, in Trout Lake, Lyle, The Dalles, Mosier, and other locations, with a goal of one million trees over the next four years

“I was in communication with Bill throughout the summer about location and time, tools and resources,” Roth said.

“I contacted (director) Mark Hickok about my goals for a tree planting and we visited Barrett Park to discuss planting there. Shortly after I met with Mark, board member Jeff Hunter reached out to me about helping with the planting.”

Hickok and Hunter took him to the Barrett Park and Hunter became Roth’s on-the-ground advisor.

“Jeff had a lot of experience planting at Barrett Park and he was able to give me a lot of information about where to plant and what type of trees had the best chance of survival,” Roth said. (The Nov. 7 project included removing several seedlings that had not survived earlier plantings.)

"We have a small staff who are overwhelmed with keeping up with regular maintenance,” Hickok said. “If it wasn’t for people like Nate, larger scale projects like this one would not get done.”

Other partners and support appeared to Roth.

He created a video about the project that he showed to the health class and the Earth Action Club at Hood River Valley High School, assisted by Peter Cornelison, a Hood River resident and member of the Columbia Gorge Climate Action Network. Roth raised $600 with the help of a letter to the editor in Columbia Gorge News describing the project in mid-September.

Visiting the grounds gave Roth ideas about expanding the project.

“It was a great spot and only about 70 trees needed, and I said, ‘That’s enough but I could make it bigger.'" Roth   said. “They mentioned they needed arbor vitae planted and I said, ‘We can do that’.

“A couple weeks before the planting, I reached out to Lava Nursery in Parkdale and they said they would like to donate the 75 Douglas firs I needed for the planting. I also contacted Dirt Huggers about purchasing some compost for the planting and they were able to give me a pretty good deal on a load of compost.”

Volunteers spread Dirt Huggers’ black compost around all the trees.

On the day of the planting, about 15 volunteers showed up, from Scouts and parents, other friends and neighbors, as well as Gina Mares, an employee of the Parks Department with a trailer for the compost, Roth said. The crew of friends and family included his parents, Dave and Michelina, and brothers Gabe and Joel.

“It took us about three hours to plant the 75 firs and 40 arborvitae.”

The work went on in mostly-dry conditions, though a brief squall at around 10:30 that morning gave the crew a brief scare.

Roth is a Columbia High School student who was homeschooled until registering with the Running Start degree program at Columbia Gorge Community College.

Roth’s post-high school plans are unknown, but he is leaning toward environmental work “or something outdoors.”