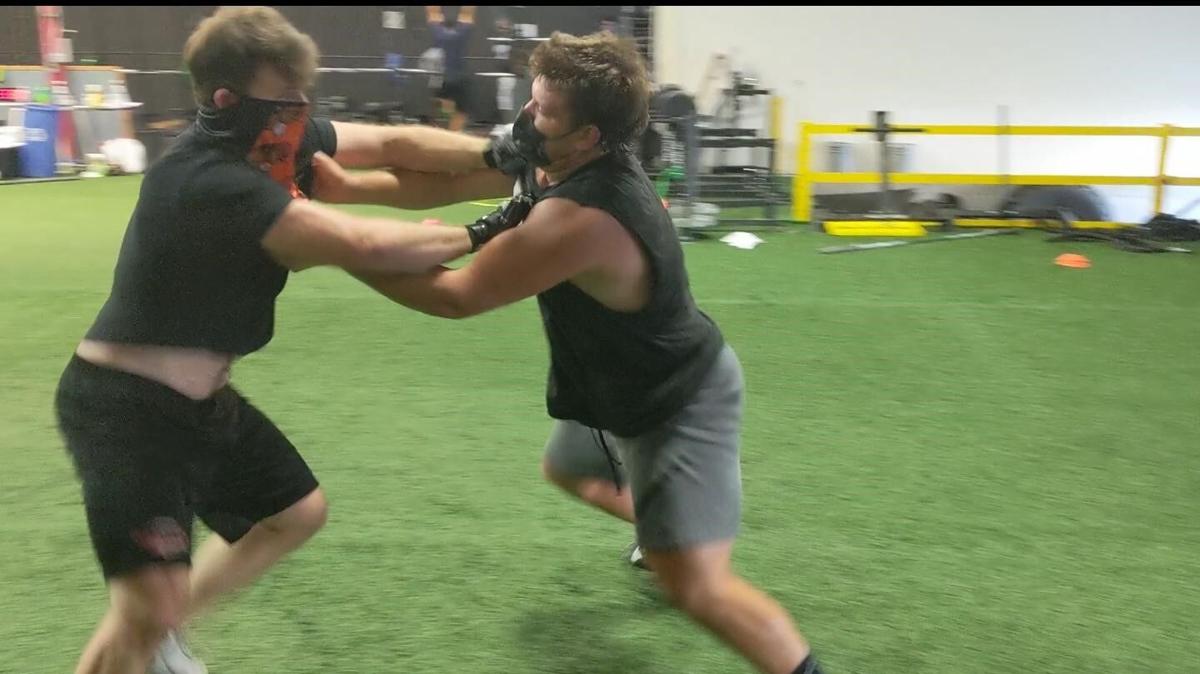 HRV senior Henry Buckles (right) has been working with football lineman skills coach Alex Linnenkohl since Buckles was in grade school. Their 90-minute workouts are at game speed — albeit without pads — and are a big reason Buckles has improved enough to play Division I football. 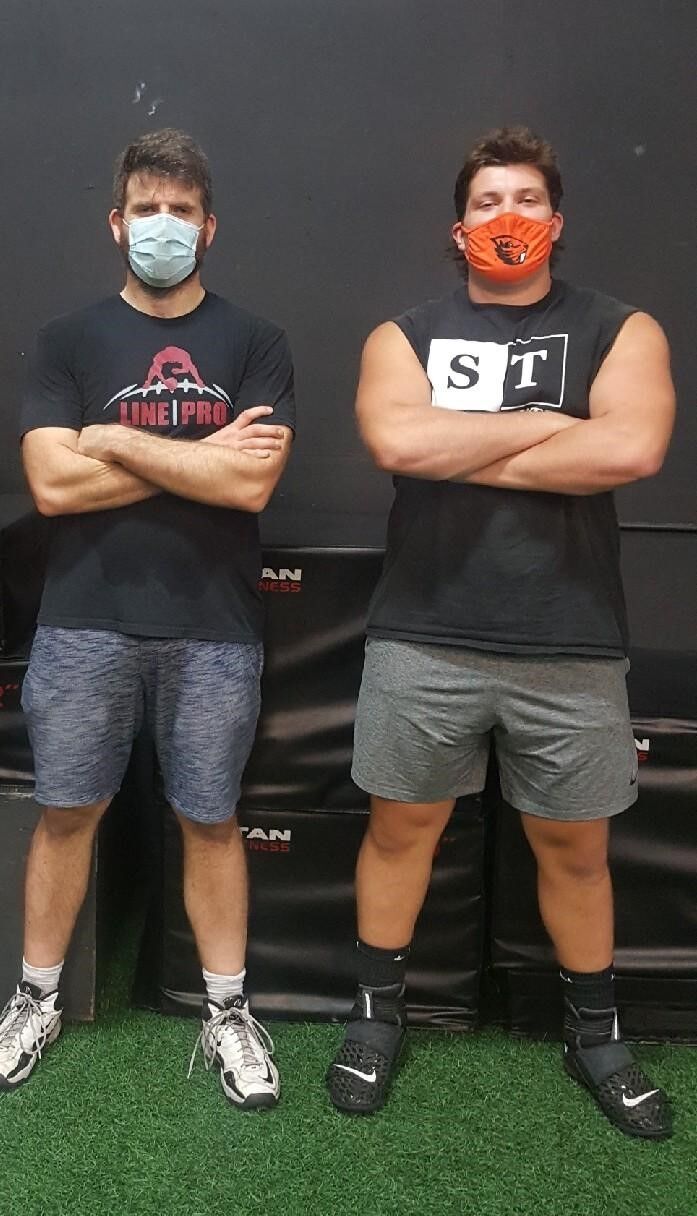 HRV senior Henry Buckles (right) has been working with football lineman skills coach Alex Linnenkohl since Buckles was in grade school. Their 90-minute workouts are at game speed — albeit without pads — and are a big reason Buckles has improved enough to play Division I football.

Impact athletes leave their mark and Henry Buckles has stamped a big imprint on the Hood River Valley football, and track and field programs.

The 285-pound senior offensive lineman verbally committed to play Division I football next season at Oregon State University. When he heads to Corvallis next summer he will leave behind a track and field career on par with some of the state’s all-time greats — including one of his mentors.

Add smarts to that combination. Buckles, who carries a 3.71 cumulative GPA at HRV, plans to major in biology at OSU. “That’s a good starting point,” he said. “You can branch off into other areas from there.”

In a “normal” year, Buckles would be opening holes for Eagle running backs, providing pass protection, or helping plug the middle of the Eagle defense, as the football team made another run at a state playoff berth. After football season was over, there would be three months of training, including a handful of indoor meets with the Super Thrower Track Club, in preparation for his final outdoor track and field season. But pandemics have a way of redefining normal.

The football season has been postponed until March 2021 because of COVID-19; track and field is scheduled to begin in May. The seasons’ restart depends mainly on Hood River schools obtaining a clean bill of health from state and county officials. When that might happen is anyone’s guess, which makes the waiting game all-the-more frustrating. Sperry said this year’s senior class includes numerous “football” players, with emphasis added on the word football. “I just hope I get a chance to coach them,” he said. “It’s a good group.” Sperry said Buckles should get credit for some of that, because Buckles — like most good players — makes those around him better.

Meantime, Buckles bides his time, working out on his own after online school days of distance learning. HRV assistant football and track coach Troy Tactay said: “Henry absolutely outworks everyone in his preparation. While others are resting in the off-season or on the weekends, he’ll get extra reps in his garage or drive to Oregon City to work out with his club.”

Buckles has decided on his college choice — and his sport of choice; this will be his final track and field season, he said. (OSU does not offer men’s track and field.) Buckles seems surprisingly content about closing one chapter of his athletic career and opening another. “I’m gonna’ miss track. It’s one of my favorite sports — other than football,” he said. “They’re probably neck and neck. For the next five years I’m going to be concentrating on football.”

Buckles has been working on his football skills since grade school, specifically with former college and professional lineman Alex Linnenkohl. A three-year starter at center at OSU from 2008-2010, Linnenkohl started working with Buckles when he was in the fifth grade. Linnenkohl later opened Linepro Football Training Center in Beaverton, where Buckles continues to be a devoted pupil.

“With Coach Linny we move at a good pace,” Buckles said of the 90-minute workouts. “He’s good at making it feel like game speed. That’s a really big reason why I’ve improved.”

Sperry knew about Buckles when he was playing in the Hood River middle school program. He recognized the potential but said he and his assistant coaches were cautious about playing him too early. They knew there was a risk of bringing along a freshman too soon, so they kept Buckles on the junior varsity team. But early season injuries left some gaps in the Eagle interior line. “All the (varsity) linemen were saying ‘get Henry, get Henry’,” Sperry said. Buckles was a starter the next game and has not left the lineup since.

Sperry said Buckles is the best player he has coached in his 20-plus years. “100 percent, without a doubt,” he said. Sperry said the main thing that sets Buckles apart is his consistency. “(He brings it) every day. High school kids are usually inconsistent (in their performances),” Sperry said. “Not Henry. Football is a tough sport ... Henry enjoys the dirtiness of it. He comes out (in practice or games) and he’s full steam. Henry understands that the game is fluid, continuous.”

What Sperry means is that when Buckles pulls out on an outside sweep play from his interior line position, he “finishes his (initial) block,” then he continues. He looks for someone else to block. “He going to keep going until the whistle,” Sperry said. “He’s going to put people on their backs.”

Others have taken notice of that, as well. Buckles took an unofficial visit to Oregon State in March (pre-COVID). Up to that point, he had one scholarship offer, from San Jose State. “I was there (at OSU) all day, from about 7 a.m. to 3 to 4 p.m. When I was done, I knew I was going to go there.”

With his college choice decided early last spring, Buckles had some unfinished business to attend to in the shot put and discus rings. His sophomore year in 2019, Buckles won the shot put and finished second in the discus at the Class 5A state track and field meet at Mt. Hood Community College in Gresham. However, he wasn’t totally satisfied with his winning throw in the shot — 59-feet, 5.5 inches — a personal best at the time. “I knew I had more,” he said. Buckles had surpassed 60-feet in practice, but not in a meet. “I was really close to 60.”

Unless your last name is Crouser, the 60-foot mark is the holy grail of elite boys Oregon high school shot putters. (Gresham’s Ryan Crouser holds the state’s all-time record of 73-5, which is five feet farther than the next best thrower.)

With 60 feet on his mind, Buckles eagerly switched gears to track and field after his junior year of football, where he had attracted the attention of college recruiters. “All winter, November, December and through March, I was working with Scott Skipper at Super Throwers (based in Oregon City),” he said. “I felt like I was right on the cusp of a big PR before the world shut down. I lost all my momentum. It was hard.”

COVID put an end to his junior track and field season before it began, as high school sports were canceled and classes throughout the nation went mostly online. Once summer started, Buckles resumed his workouts in earnest with his club team, Super Throwers. “I had to get back going again,” he said. “It took a while.”

Buckles showed steady improvement during his workouts. “I scratched some big throws. When I finally hit (60) it was a big relief.”

His first official 60-footer came June 20 at a Super Throwers meet in Oregon City. He followed that 60-4 toss with four more 60-foot meets, culminating Aug. 15 with a new school record of 63-3. His series that day included five throws past 60 feet, he said.

Buckles’ school-record throw eclipsed the old mark of 62-3.5 set by Sebastian Barajas in 2016. His 63-footer puts Buckles at No. 7 on Oregon’s all-time shot put performer list. Who’s Who in Oregon High School Track & Field — the bible of the sport in Oregon — has records dating to the 1960s. Buckles joins fellow HRV athletes Barajas and Jestena Mattson (see box) on the all-time top 10 lists in their events.

Buckles said some credit for his success as a thrower goes to Barajas. The four-time state champion (discus 2016, 2015, 2014, 2103) mentored Buckles when he was in middle school.

“In the summer of seventh grade I started working out with him,” Buckles said. “I think I improved like 20 feet. He helped me so much. He has such good technique.”

Tactay has coached both Barajas and Buckles as HRV’s throws coach. “Henry has more than just strength. He has great technique, footwork and balance,” Tactay said. “But what separates Henry from other throwers is his mental toughness and preparation. He thrives under pressure in high level meets.”

Buckles also set a personal record in the discus this past summer of 175-1. That throw also came at a Super Thrower meet, this one on July 11. “It was a really clean (throw). It felt good,” he said. “I had a couple of big throws that day that I’d scratched on. I was satisfied with that one.”

Buckles’ track and field career may end next year, but his football career may be just beginning. Beaversedge.com, the Oregon State football specific page on the college recruiting website, Rivals, wrote this online about Buckles: “OSU offensive line coach Jim Michalczik should be able to mold (Buckles) into a quality power-five lineman as he’s got potential written all over him.”

Buckles said he is lifting weights six days a week to prepare for college football; he reports to OSU in mid-June for summer workouts. That said, there is a possibility he may not be done throwing, as the high school track and field season is scheduled to culminate June 26 at the state meet. If that’s the case — if the extended COVID “timeout” is finally over and play resumes — OSU and Beaver football will just have to wait.