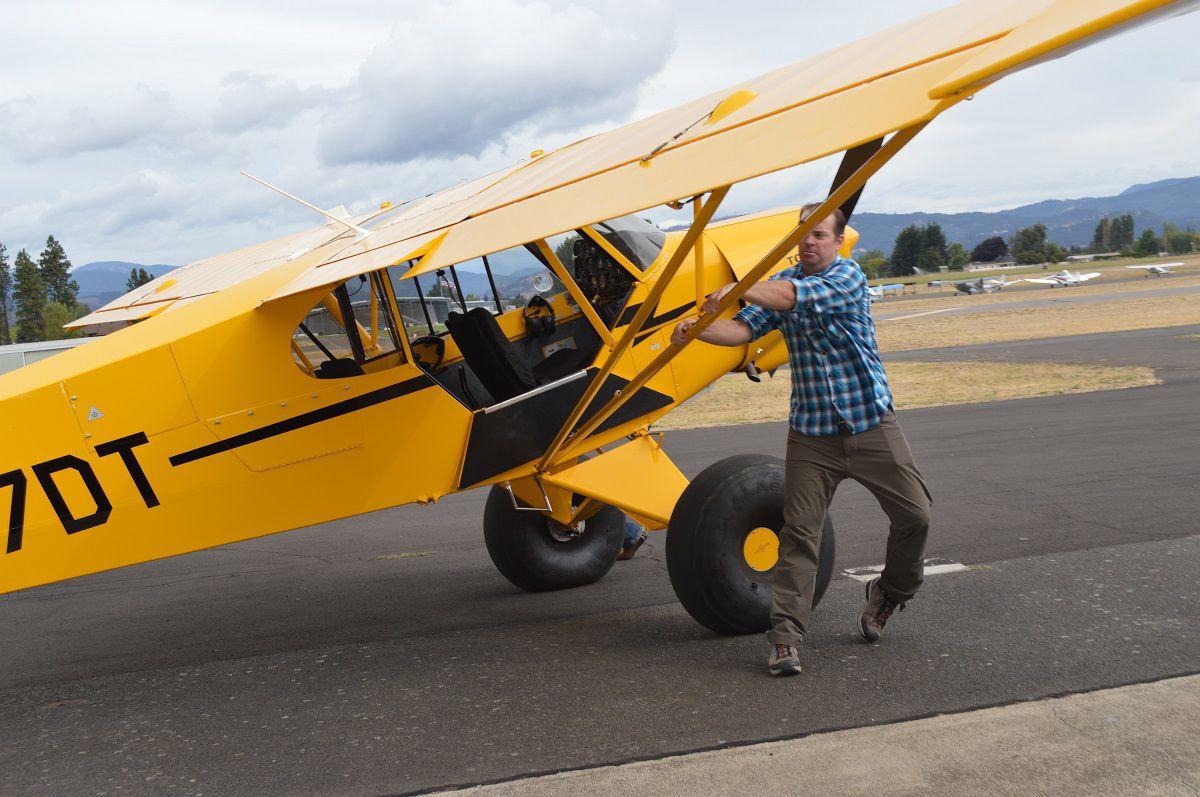 Photo by Patrick MulvihillJEREMY YOUNG, TacAero vice president, rolls a top cub airplane into place for takeoff at Ken Jernstedt Airfield. Daily business is lively at the Hood River airport, and new developments are on the way. 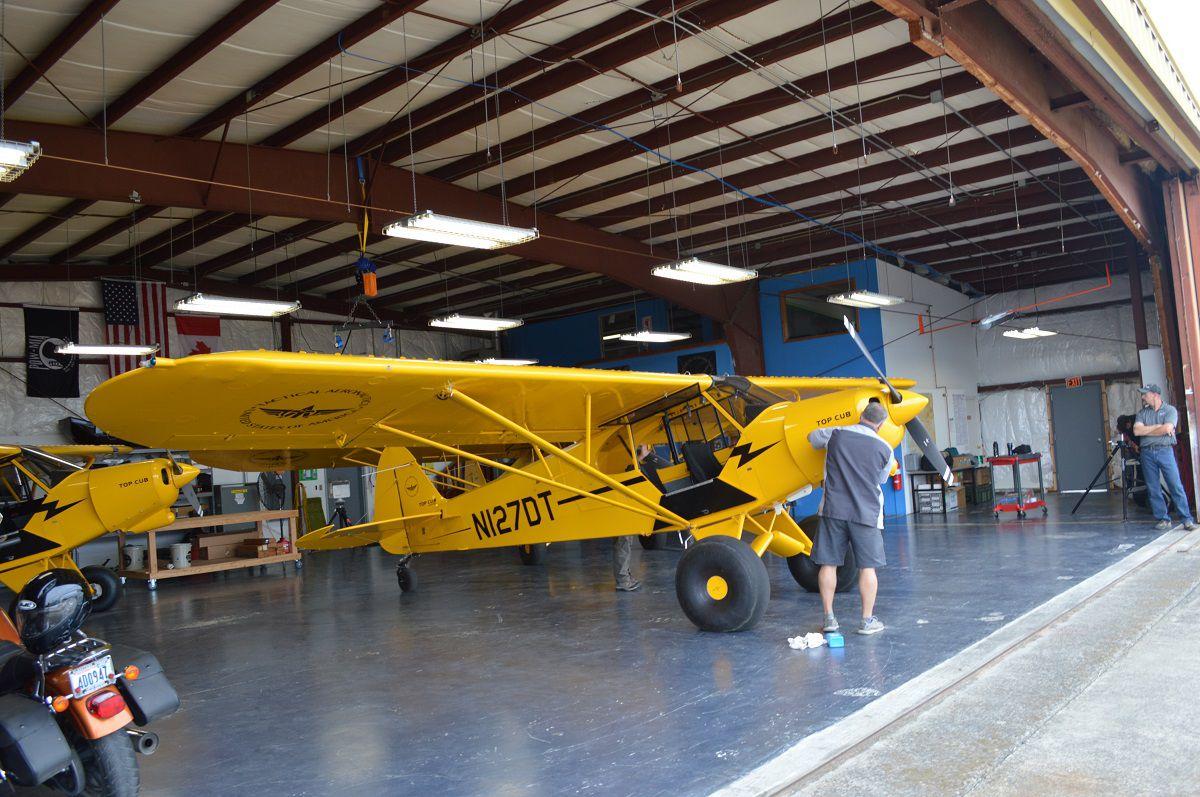 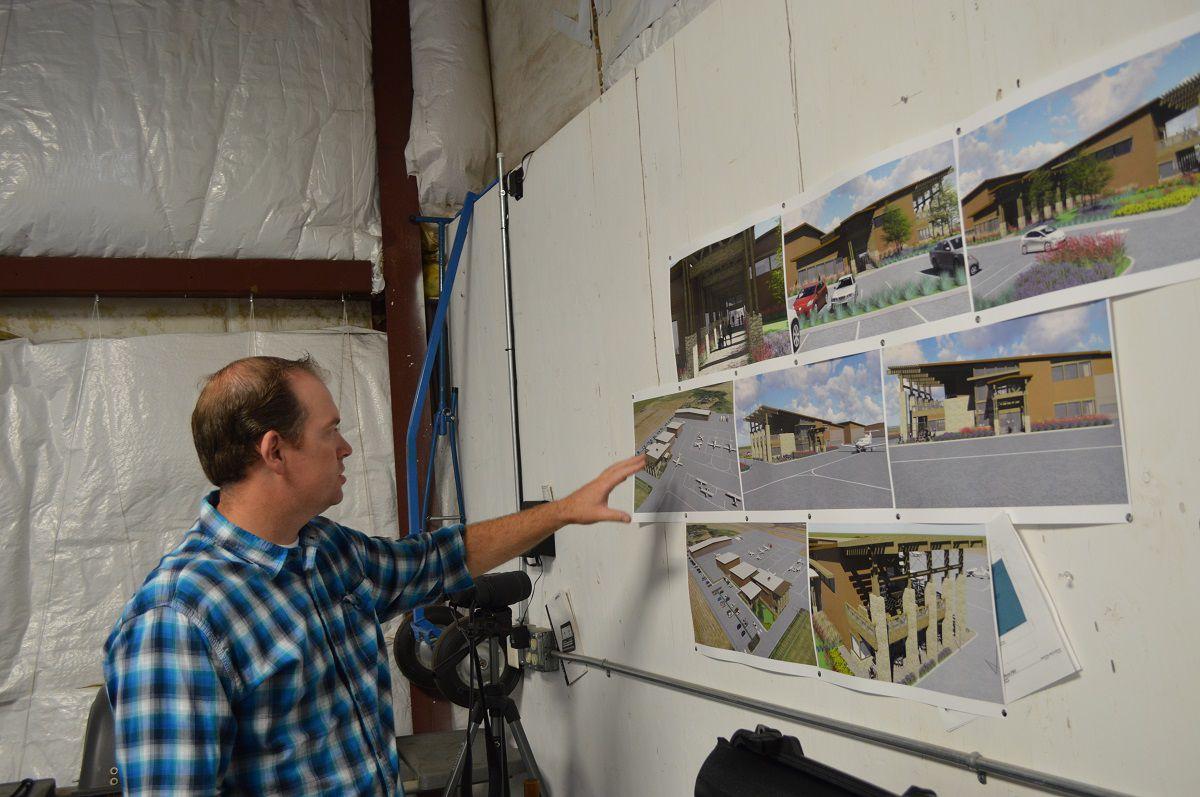 Jeremy Young with TacAero discusses early renderings of a new public building proposed on the north side of the airfield.

Photo by Patrick MulvihillJEREMY YOUNG, TacAero vice president, rolls a top cub airplane into place for takeoff at Ken Jernstedt Airfield. Daily business is lively at the Hood River airport, and new developments are on the way.

Jeremy Young with TacAero discusses early renderings of a new public building proposed on the north side of the airfield.

Plans for development at the airport have picked up altitude.

Ken Jernstedt Airfield will see major structural upgrades over the next few years, part of a 20-year master plan by the Port of Hood River and aviation partners.

Most noticeably to the public, the current fixed base operator (FBO) building will move from the south end of the airport to north side, where a lawn currently separates the north ramps from Western Antique Aeroplane and Automobile Museum.

se a shift for TacAero, the port’s newly contracted FBO, which is a private business that provides a bevy of services for pilots and manages the visitor office.

The new FBO will be an inviting spot — with free entry to the public — similar in design to the Hood River waterfront’s open spaces.

“This is the gateway,” Jeremy Young, TacAero vice president, said of the FBO site. “Come here, land in the Gorge. Get in a bi-plane, see the waterfalls from the bi-plane.”

While the current FBO building off Tucker Road is open to the public, the newer facility will be more multi-faceted. It will include a café where visitors can watch planes take off from the runway.

Young hopes the first structures involved will go up by 2018. For now, TacAero is ironing out their design plans with the port.

The new FBO relocation is a central piece of the master plan, which calls for numerous infrastructure upgrades at the airport. To carry them out, a set of state and federal grants — timed out in succession — will need to be secured by the port.

“The port owns this airport, but … we are not pilots. So we rely heavily on TacAero and people that are experts in aviation to help understand how we can help them create an airport that is really functional and really inviting,” Anne Medenbach, Port of Hood River properties and development manager, explained.

The major points the port wants to hit via the airport expansion include education, training, technology, accessibility, and emergency services.

“They’ve (TacAero) been the catalyst to try to move that forward,” Medenbach said.

Busy days at the airport

There’s rarely a dull moment at the airport, according to TacAero’s vice presidents, Young and Brian Prange. Pilots touch down frequently to take part in the services offered in Hood River.

The company has served the port since May, when the Hood River Port Commission approved a switch over from their former contracted FBO, Classic Wings Aero Services, Inc. to Hood Tech Corp., Aero Inc. (TacAero).

The FBO’s staff began at four and has quintupled to 20. Its flight students hail from the Columbia Gorge — including a Hood River Valley High School internship — and around the globe. Recently, a father and son traveled from Africa to take part in the flight program.

“People are coming from all over the world to learn to fly in these airplanes,” Young said.

TacAero has an exclusive flight training contract with CubCrafters Inc., a popular manufacturer based in Yakima, Wash., known for their adventure-suited bush planes. “With advanced tailwheel instruction as a specialty we can do out of Hood River, and as a company, it’s really exciting for aviation,” Prange said.